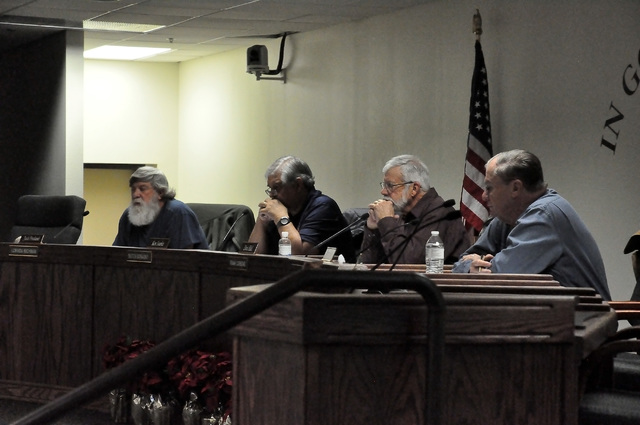 Horace Langford Jr. / Pahrump Valley Times The biggest impact to Nye County from a proposed military expansion would be water availability, officials said. The Nye County Water District Governing board discussed the status of the federal lands use plans at the recent meeting

The biggest impact to Nye County from a proposed expansion of the military would be water availability, officials said.

Officials discussed the status of the federal lands use plan at the recent Nye County Water District Governing Board meeting.

“The single biggest impact is the water resource availability in Nye County because the number of basins within the Nellis Range, the Nevada Test Site, and Fallon is substantial,” MaryEllen Giampaoli, environmental compliance specialist said.

The Navy seeks to renew its existing arrangement for 202,859 acres at the Fallon Naval Air Station in addition to seeking another 604,789 acres of public land for military use to expand the Fallon Range Training Complex. The Navy also wants to acquire another 65,160 acres of non-federal land.

The land withdrawal from Nye County that would come with the proposed expansion would cause isolation of the water resources, Giampaoli said.

“The single biggest impact is the water resource availability in Nye County because the number of basins within the Nellis Range, the Nevada Test Site, and Fallon is substantial,” she said.

“We’ve made pitches to the Air Force and to the DOE to allow us onto those land withdrawals to be able to potentially develop water resources and those conversations are always nonstarter,” she said.

The withdrawals will affect some private lands and state lands. It will also affect geothermal leases, oil and gas exploration areas, she said.

“The cumulative impacts of Nellis, whether it’s new impact or what’s been ongoing since the start is substantial and significant and that’s the bottom line,” she said.

Additionally, officials discussed the Bureau of Land Management’s Resource Management Plan under which Nye County could get thousands of acres of new land.

Nye and Clark counties have requested new lands beyond what is currently available for disposal in the 1998 Las Vegas management plan. The cities of Mesquite, Henderson, North Las Vegas, and Las Vegas have also requested additional lands for disposal.

“Things have really stagnated on this front with respect to the Bureau of Land Management that a few years ago came forward across most of the western states trying to update their resource management plans for the various district and field offices,” Giampaoli said.

“If the BLM disposes of lands, it shouldn’t be disposing of lands for growing houses. We got plenty of land to grow houses,” Wichman said.

“For the Resource Management Plan for Southern Nevada that’s always been what we’ve talked about is that there are limited numbers of large parcels available in Pahrump that would support commercial and industrial development, and other types of things like airports,” he said.

“We are expecting in January 2017 to hear from the BLM state director what he is decided to do with the RMP,” she said.

Officials also said that there has been no update on the status of the BLM’s Battle Mountain District Office’s Resource Management Plan. The BLM is also preparing an associated Environmental Impact Statement to guide management of BLM-administered public land surface lands and federal minerals within the district.

The 13.5 million acre planning area is comprised of federal state and private lands, as well as Indian reservations within Lander, Eureka, Nye and Esmeralda counties.

The BLM does not manage lands for other federal entities, and the RMP will cover a decision area of 10.5 million acres of BLM land, according to its website.