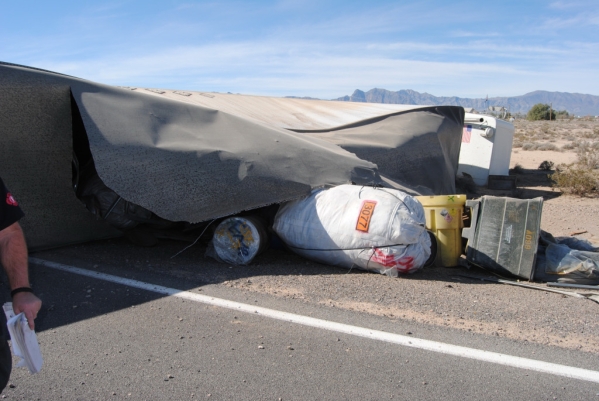 Waste oil and the chemical element chromium were among the substances aboard an overturned truck that spilled hazardous waste bound for the US Ecology facility Thursday afternoon.

The spill blocked the highway for upwards of 12 hours as crews worked to mitigate the incident.

Chromium is described as a steely-grey, lustrous, hard and brittle metal which takes a high polish, resists tarnishing and has a high melting point.

The element can be toxic and carcinogenic, but it is not radioactive.

Nye County Emergency Services Manager Vance Payne said though NHP is handling the investigation, it appeared a motorist driving along Highway 373 contributed to the crash.

“Apparently the hazardous materials waste hauler was traveling along 373 and a motorist pulled out in front of them in her automobile,” he said. “The driver, in an attempt to avoid a collision, struck the car and ended up turning the truck over on its side, essentially spilling the contents.”

Payne noted that a contractor for US Ecology was summoned to clear the highway. The company addresses the waste management needs of customers, offering treatment, disposal and the recycling of hazardous and radioactive waste, as well other industrial services.

“It is my understanding that it was a mixed load of waste oil, some corrosives and some chromium,” he said. “There was a small amount of chromium and waste oil that was spilled. It was apparently picked up by a contractor for US Ecology Nevada. The highway was closed for at least 12 hours. The Nevada Highway Patrol is investigating the incident.”

Officials at US Ecology did not respond to a request for comment by press time on Tuesday. However, the company touts health and safety as its highest priority as described on its website.

“US Ecology’s highest priority is ensuring environmental health and safety,” the passage read. “Whether it’s managing hazardous waste disposal or providing onsite field and industrial services, our systems are designed to ensure operational reliability and our personnel are trained to provide services meeting all regulatory and safety standards.”

As per a mutual aid agreement, Pahrump Valley Fire and Rescue Services commonly respond to calls through the area, Payne noted.