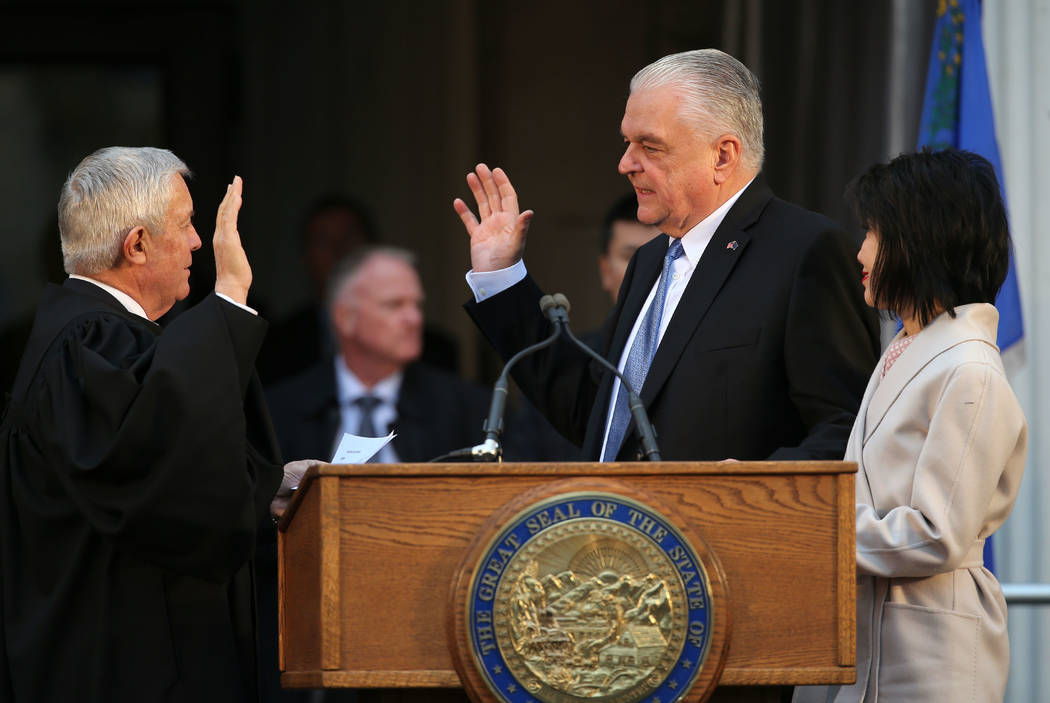 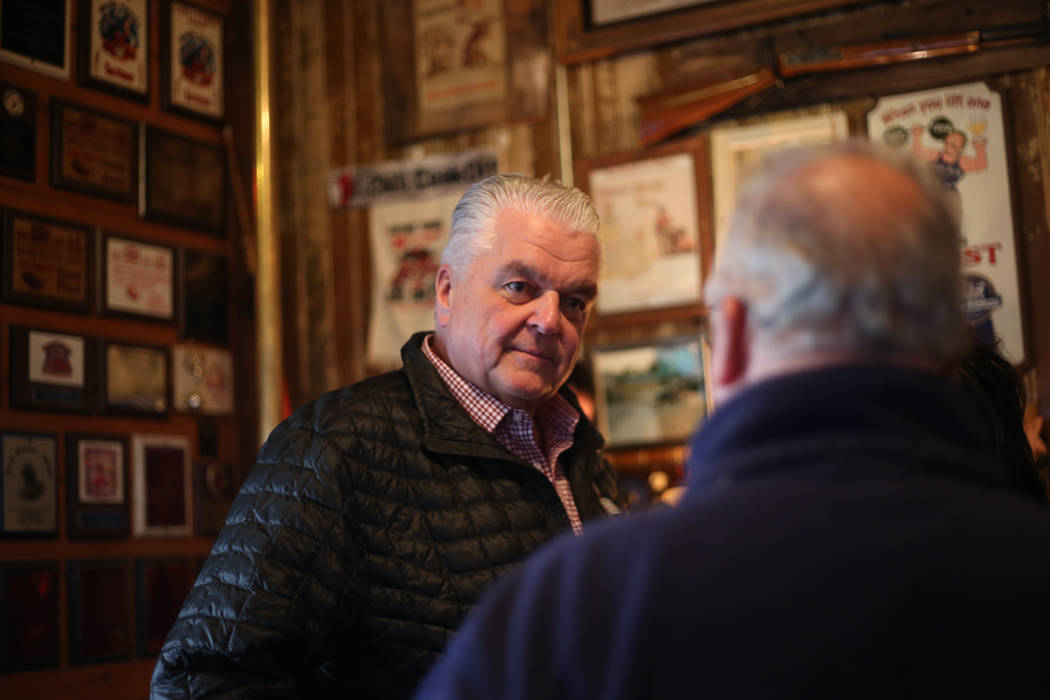 Edison Graff/Speical to the Pahrump Valley Times Nevada Gov. Steve Sisolak speaks with locals and others at the Happy Burro Chili and Beer in Beatty on Jan. 4, 2019. Sisolak traveled through several Nye County towns on the way to his inauguration ceremony in Carson City from Las Vegas. 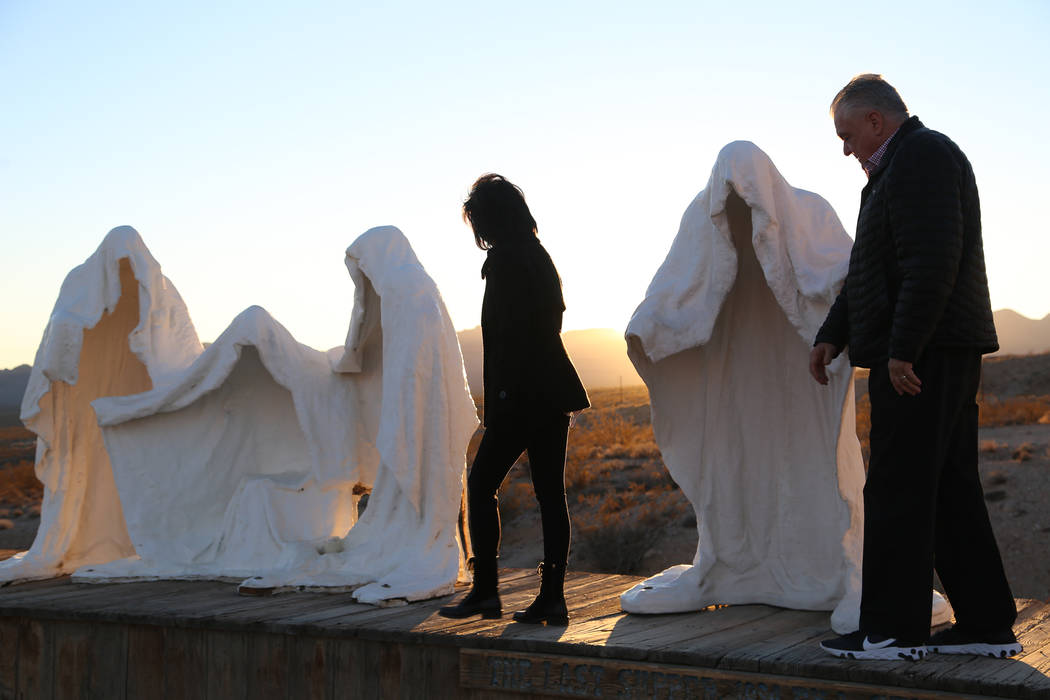 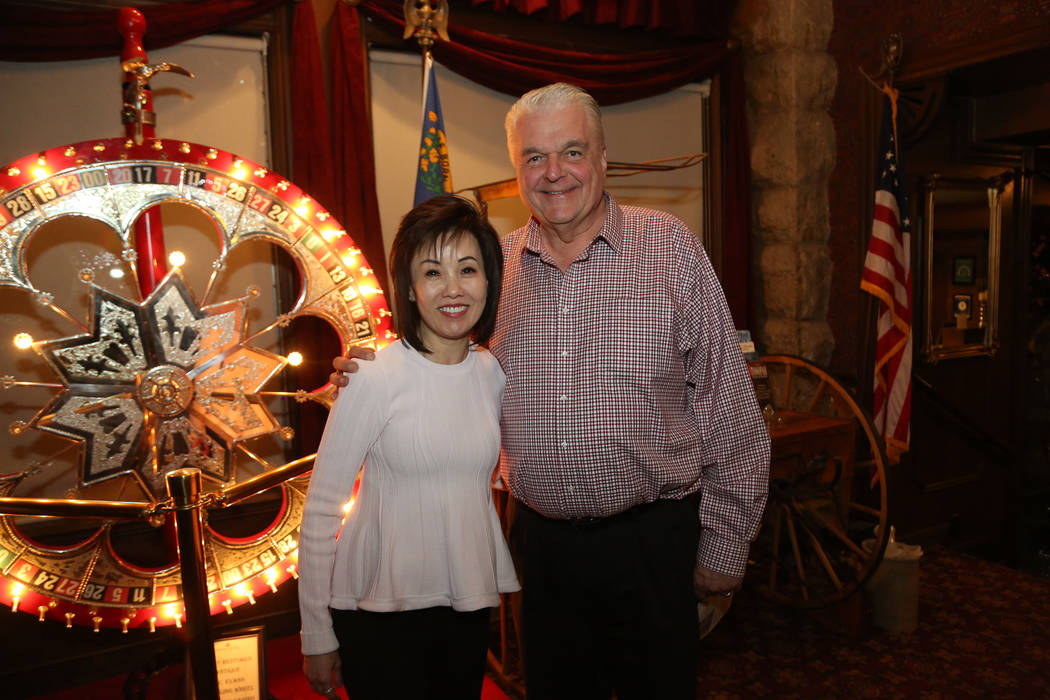 Edison Graff/Speical to the Pahrump Valley Times Kathy Sisolak, formerly Kathy Ong, (left) with her new husband Gov. Steve Sisolak (rght) at the Mizpah Hotel in Tonopah. The newly married couple stopped at the Mizpah and several other towns on a trip from Las Vegas to Carson City for Steve Sisolak's inauguration ceremony. 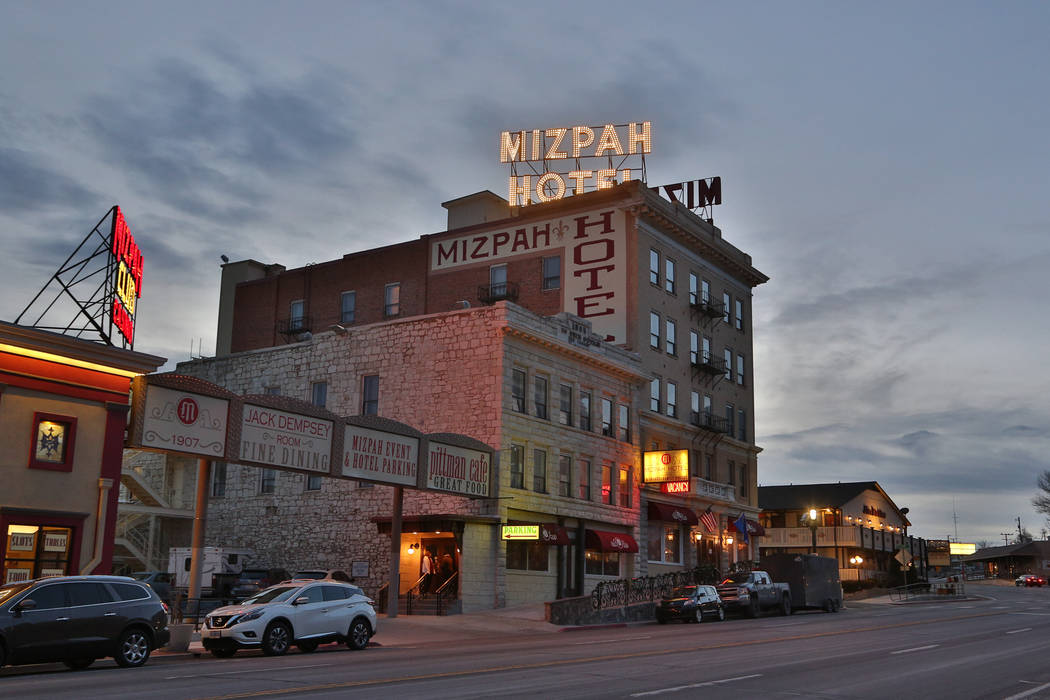 Edison Graff/Speical to the Pahrump Valley Times Nevada Gov. Steve Sisolak stopped at the Mizpah Hotel on his trip up to Carson City from Las Vegas. He was inaugurated on Jan. 7, 2019.

Nevada’s new governor, Democrat Steve Sisolak, started his trek from Las Vegas to Carson City in early January, heading through multiple towns in Nye County on a northern course to his inauguration ceremony. Sisolak was sworn in on Monday on the steps of the state capital building in Carson City on Jan. 7, marking the first time in two decades that Nevada has had a Democrat for its governor.

Sisolak stopped in several parts of Nye County, including Tonopah, Rhyolite and other towns. A reporter from the Pahrump Valley Times caught up with Sisolak at Beatty’s Happy Burro Chili and Beer at 100 W. Main St., where the new governor stopped to try out the cuisine and learned more about his policies on issues the rural and urban portions of Nevada are facing, as well his solutions.

One of Sisolak’s focuses during his four-year term will be on health care, where he plans on starting a Patient Protection Commission.

“We intend to start a Patient Protection Commission, which will delve into the health care situation that we’re dealing with …the continued expansion of Medicaid and make sure that people with pre-existing conditions continue to be covered,” he said. “We’re going to work on prescription drug prices and also the mental health shortages that exist.”

Health care has been part of Sisolak’s platform, even during his time as a candidate.

Sisolak continued, saying that “we’ve got to get across the fact that we need to do something to protect the patients when it comes to rising costs in health care.”

A recent ruling in the federal courts has brought a challenge to the Affordable Care Act (Obamacare). A federal judge in Texas ruled the individual mandate was unconstitutional and that the remainder of the law was “inseverable” and subsequently “invalid.”

U.S. District Judge Reed O’Connor ruled the 2010 law invalid due to the 2017 Tax Cuts and Jobs Act nixing a penalty for not carrying health insurance.

In 2012, the U.S. Supreme Court, in a 5-4 ruling, found in favor of the Affordable Care Act’s individual mandate, which required people to purchase health insurance or face a penalty, or a tax. The court’s ruling of constitutionality was based on Congress’ taxing authority, where the penalty was viewed as a type of tax by Chief Justice John Roberts.

With the elimination of this penalty or tax through tax reform in 2017, O’Connor ruled the individual mandate unconstitutional, as the rationale of Chief Justice Roberts’ ruling was no longer in play. O’Connor didn’t issue an injunction in the case; this essentially means that the current law will stay in place as it makes its way through the courts.

Nevada’s new governor and Nevada Attorney General Aaron Ford announced plans to join other states that are opposing the ruling and seeking an appeal just after the decision was handed down, according to a Dec. 15, 2018 report in the Las Vegas Review-Journal.

The lawsuit was brought by Texas and 19 other states.

Things were still moving along in Nevada’s insurance exchange.

According to the Centers for Medicare and Medicaid Services, the final tally of people that signed up for health insurance through the state’s health insurance exchange was 83,449, down from 91,003 during the previous year’s enrollment period.

The exchange’s open enrollment went from Nov. 1 to Dec. 15.

Sisolak also spoke about issues that rural Nevada is facing with health care.

“The rural area, one of the big problems we have is providers,” he said. “We don’t have enough providers in some of the rural areas.”

Sisolak said “we’re going to try to expand, working with United Healthcare, to expand some of the telemedicine that’s going into the rural areas and give an incentive for health care providers that provide their services in the rural areas. Sometimes there’s just not enough business to keep them there, but we’re going to work to that end.”