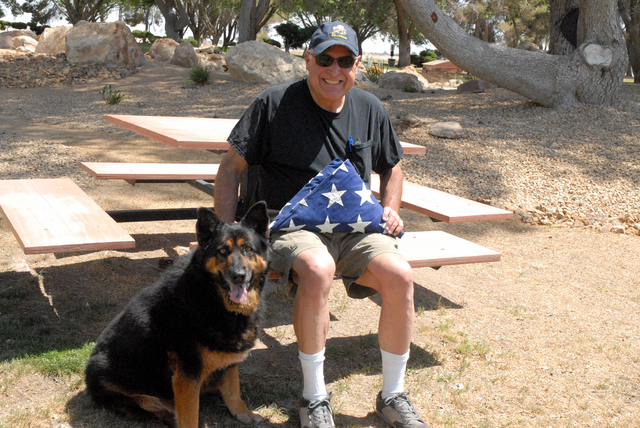 On mere appearances, one would think Pahrump resident Dennis Sawran is the embodiment of a healthy 60-year-old man.

The tall, stout, military veteran shows no outward signs of ailments or frailty, but internally, Sawran is in horrible shape.

Roughly 15 years ago, Sawran was diagnosed with Peripheral Arterial Disease.

The condition reduces blood flow to the heart, brain and the body’s lower extremities.

He has undergone open heart surgery about a half dozen times.

Sawran said physical issues aside, he believes what’s really going to put him in an early grave is undue emotional stress at the hands of the Veterans Administration (VA).

In 1999, Sawran’s medical condition prompted him to apply for Social Security Disability Insurance.

Additionally, he said he was urged by a veterans administration official to apply for what’s known as a VA Disability Pension for his service in Vietnam.

“I didn’t even know of its existence,” Sawran said. “The VA presented that to me because they said I qualified for it. It was $1,000 a month and at that time I had no income. I couldn’t work and my Social Security took nearly four years to come in,” he recalled.

Roughly a year later, Sawran said he finally received his disability pension from the VA when he discovered a lump sum payment of $13,000 in his mailbox to be followed by the regular $1,000 monthly disbursements.

That’s when, as Sawran said, his entire world was turned upside down.

“At the time they offered this to me, I told them I’m still waiting for my social security. They said this was different and it came from separate funding, so it was okay,” he said.

In 2006, the veteran finally received word that he was scheduled for a hearing on his social security disability insurance claim where he and his attorney appeared before a magistrate.

“The judge was just outraged because I was so obviously disabled. At that time, I could not walk more than 10 feet,” he said.

Following the ruling, Sawran asked his attorney what will become of his VA pension in light on the judge’s favorable Social Security ruling.

“My attorney told me that they will off-set it because there’s only a certain amount that you can take in on benefits and whatever is over the amount, they will deduct it or completely eliminate it and I thought that was fine. I had no problem with that,” he said.

Sawran continued receiving payments for the better part of six months until one day the VA pension checks stopped coming.

He just figured they ended it as his attorney said might happen, but he was still okay with that.

It wasn’t until a friend told him about then President George W. Bush’s 2008 economic stimulus package where most taxpayers below the income limit received a rebate of at least $300 per person, which he also qualified for and thus applied.

He said what happened weeks after filing for the rebate, was dreadful.

“All of a sudden I get a letter from the VA. I was being billed over $33,000, and they wanted every penny of it back and they garnished my social security to get it,” he said.

Sawran reacted by taking his brother’s military funeral flag and hanging it upside down in front of his home.

An upside down American flag is a universal sign of distress.

“It was like I was declaring war on them for doing that. It’s now a law that you can’t get your Social Security and the military pension that you’ve earned, but I didn’t know that,” he said.

Sawran said the most egregious part of the issue were the penalties associated with the VA’s garnishment.

He said he basically got the runaround from VA officials while trying to remedy the situation.

“The most unfair part of this was the outrageous amount of penalties and interest they’re charging to a guy who is on Social Security and doesn’t make hardly anything,” he said.

Sawran was quick to mention that his grievances with the VA were not directed at the officials in Pahrump.

He said his dealings and frustration were directed at VA officials at the Debt Management Center in Fort Snelling, Minn.

He also noted that he was not attempting to stop the garnishment, nor was he disputing the amount.

Sawran was just trying to get the payments reduced to have enough money for basic needs.

“They started taking about $185 a month out of my check. It may not sound like a lot to a person that has a decent income, but that’s a lot of money for me and it prevents me from doing a lot of things,” he said.

Social Security recipients receive a cost of living increase that gives them a few extra dollars each month.

Sawran said each time he received the adjustment, the VA would just help themselves to it.

“Every single time I got an increase, they would jack up the money they took from me,” he said.

To make matters worse, Sawran said his health began to suffer as a result of the stres.

Sawran said much of his stress could have been avoided had he known about a waiver application from the VA, which may have forgiven his $36,462 debt.

He recalled that the application waiver was to be submitted to the VA within 180 days.

Sawran said he never received the correspondence, until June 26, of this year.

“Seven years ago they said I had 180 days to appeal the decision. I never got any letter about that. All I got was they were taking my money because I didn’t appeal it in time,” he said.

“Now it’s in writing and in print and the congressman can use this,” he said. “Before it was all just hearsay. It was my word against their’s. I can’t afford to be a veteran because this was supposed to be my benefit. It went from a benefit to a burden.”