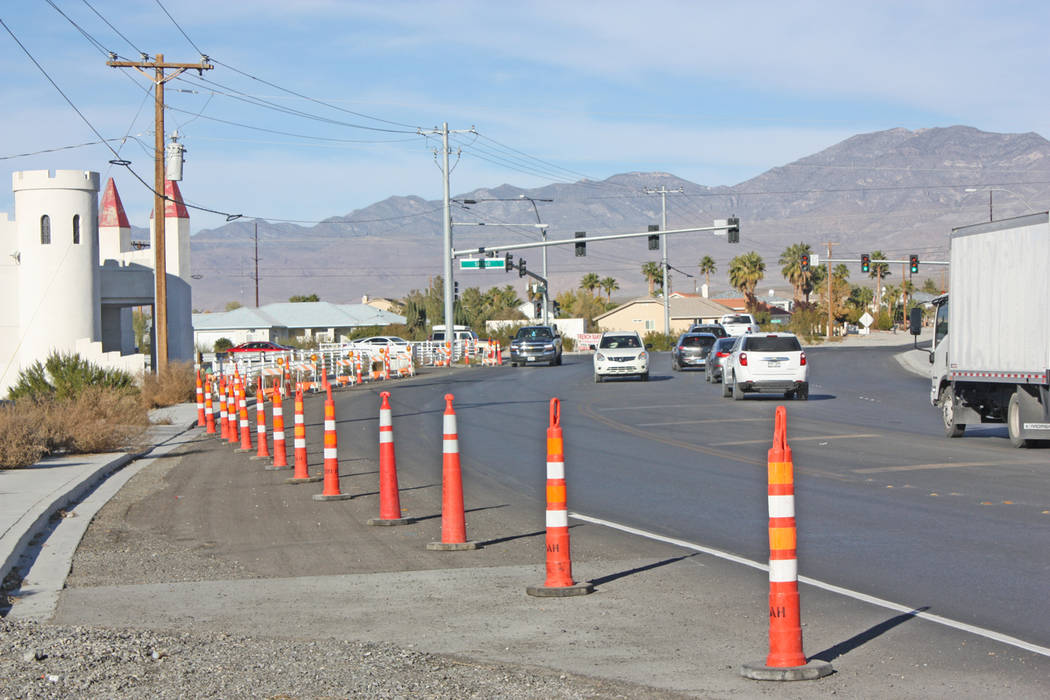 Robin Hebrock/Pahrump Valley Times A view of Homestead Road as it approaches the intersection of Highway 160, where the roadway has been awaiting repair for over a year. 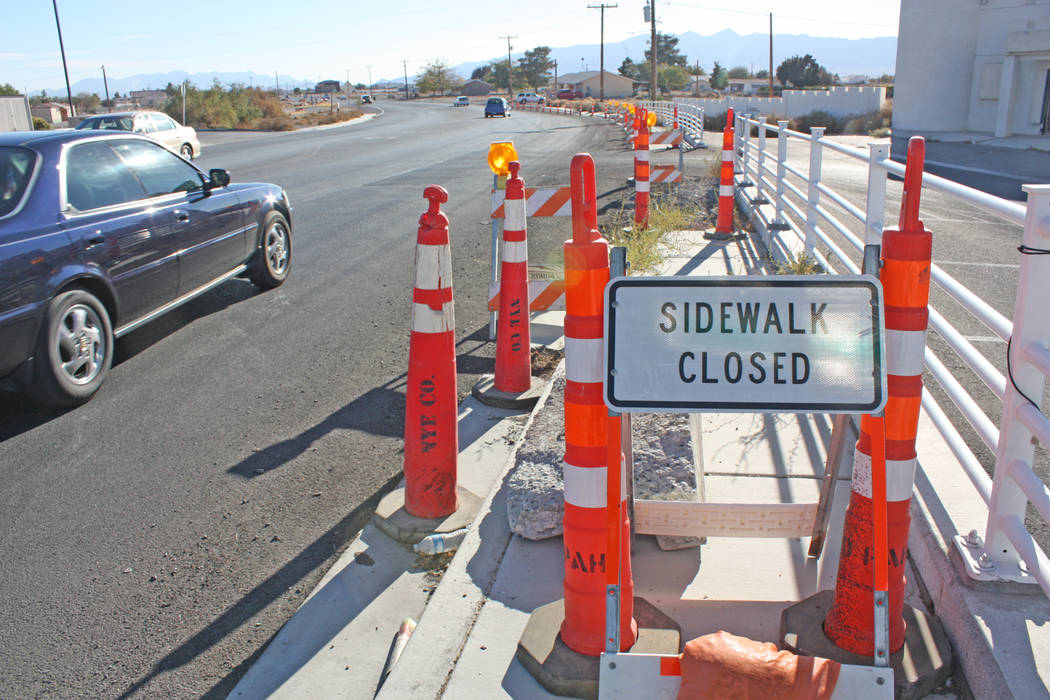 Robin Hebrock/Pahrump Valley Times Part of the cone zone on Highway 160 and Homestead Road includes a sidewalk closure, a fact that many residents have taken to social media to complain about. 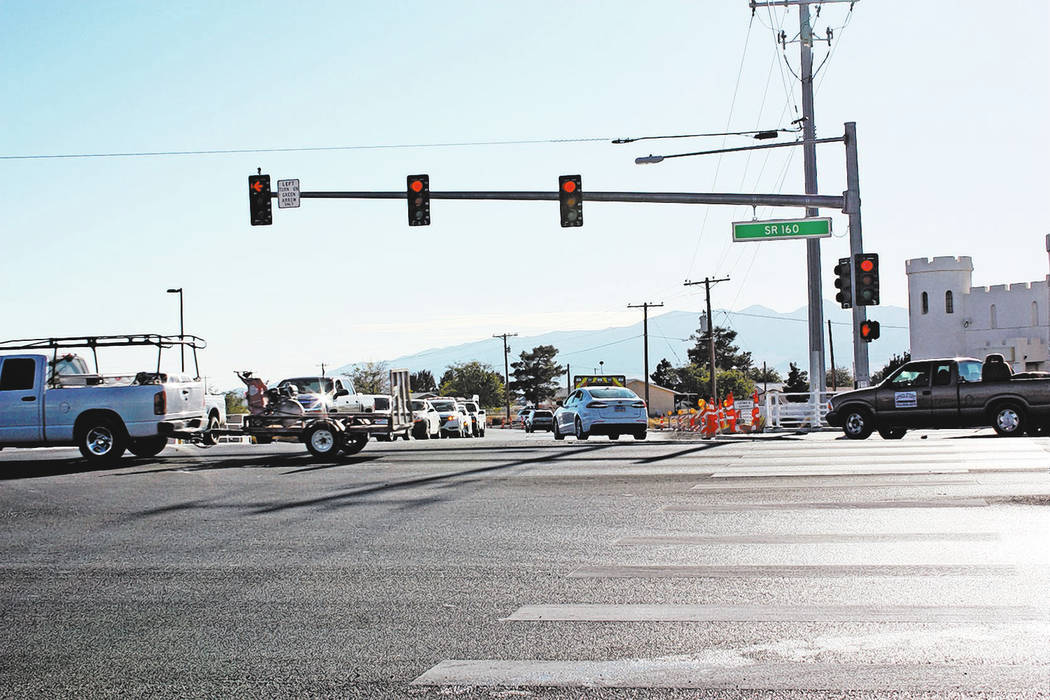 A full year after a water main break occurred within the Great Basin Water Company system, the affected intersection of Highway 160 and Homestead Road is still languishing in disrepair with traffic cones lining the street and an inaccessible sidewalk creating hazards for pedestrians.

Nye County Public Works has been working with the utility over the past 12 months to push forward the restoration of that intersection but construction on the roadway has yet to commence, prompting irritation as well as safety concerns among residents.

Great Basin Water Company representatives stated that they are currently still in the process of gathering the necessary information required by the county, remarking that this is because the county has continually changed its requirements. However, the county places the blame for the delays on the utility, asserting that public works has expedited the review of each new round of required information in an attempt to move matters forward. County officials stated that if the project continues to linger in limbo, the county may decide to take over construction itself and charge the cost to the utility.

“One year later we still don’t have a repaired roadway from the waterline break at Homestead and State Route 160,” Nye County Public Works Director Tim Dahl said of the situation in an email sent Nov. 16. “I recently reached out to GBWC with an offer to take over the repair of the roadway. The response I received was that they would like to continue to evaluate the site (as we requested) in an effort to be more specific to the repairs that are needed to return the site back to the condition prior to the waterline break.”

Dahl said he will be giving the utility a little more time to complete its site evaluation, after which he will make the final decision on where this project is headed. “Once the evaluation report comes back I will invite GBWC to a meeting where I will evaluate their intentions and decide to either allow them to move forward or that is in the best interest of the public to complete the repairs and seek restitution from the utility company for the cost to do so ourselves,” Dahl detailed.

Dahl also stated that he wanted the community to understand that the county was not at fault for the length of time the Highway 160 and Homestead Road intersection has remained damaged. “Just a quick note to emphasize that all but two weeks of delay on my part to obtain the original soils report have been a direct result of GBWC and their engineer,” Dahl said, remarking, “We have rushed every review and have provided them with every opportunity to move this project forward.”

The utility, on the other hand, stated that the major cause of delay was in the county’s desire for new plans for the roadway. “Great Basin Water Co. was of the view that the repairs in question and the road remediation that would be completed should be done in accordance with the original plans (the so-called ‘as-builts’) for the section of roadway that was affected,” Great Basin Water Company President Wendy Barnett stated when reached for comment. “Nye County Public Works requested new plans and testing recommendations beyond the scope of returning the road to its original condition, which has impacted progress.”

Barnett said the utility has completed each of the multiple subsequent revisions requested by Nye County and is currently working toward one more submission.

Once the utility has accomplished the geotechnical testing, a process Dahl said he anticipates should not take more than a couple of weeks, the results should be submitted to Nye County Public Works for review.

At that time, he said he will hold a meeting with the utility and evaluate Great Basin Water Company’s timetable for construction, noting this would be the linchpin in whether the county will assume the road repairs itself. “If it’s going to be another six months, I am not going to let it go that long,” Dahl said on Nov. 20.