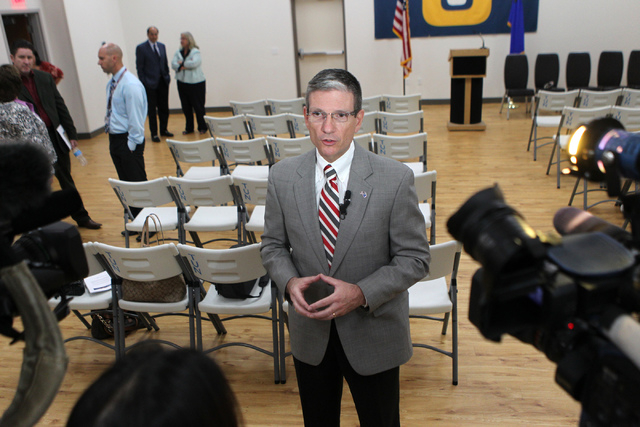 The siren call of an open seat is proving an allure to Nevada members of Congress who were not giving the U.S. Senate a second thought when incumbent Sen. Harry Reid was in line to run again.

Once dismissing the idea out of hand, Rep. Joe Heck, R-Nev., now is taking another look at becoming a Senate candidate, aides confirmed Thursday.

And Rep. Dina Titus, D-Nev., says she still is weighing a run given the opening when Reid declared last month he would not seek re-election in 2016.

Politicians are drawn to open seats, which for most of them present once-in-a-career opportunities. The last open Senate seat in Nevada was in 2000, and it was captured by Republican John Ensign. Reid became a senator after winning an open seat in 1986.

Open seats tend to level the playing field and cause candidates to measure competitors in a different light, according to experts. In 2016 the landscape also will be impacted by a presidential campaign for an open seat in the White House.

“If (open seats) are not siren songs, they certainly have this come-hither feel to them,” said Michael Green, a history professor at the University of Nevada, Las Vegas.

A handful of state and local leaders in Nevada are looking at the race. Even Sharron Angle, the Tea Party Republican who ran a topsy-turvy campaign in losing to Reid in 2010, is keeping options open. “I’ll let you know soon,” she told a reporter this month.

Heck met April 14 with officials at the National Republican Senatorial Committee. The meeting took place at the party’s invitation. Gov. Brian Sandoval, the party’s first choice, has expressed little interest to date in the race.

The meeting was described as fact-finding in nature, at least on Heck’s part.

Heck also has been testing financial waters, contacting donors who might contribute to him if he runs for the Senate, said a GOP operative. Heck has accumulated more than $920,000 in his campaign account, a sum that would give him a bit of a jump although a Senate race could cost him $20 million or more.

The three-term congressmen who represents Henderson and the southern reaches of Clark County ruled out a candidacy initially due to concerns about juggling a campaign with his House job and his duties as a brigadier general in the Army Reserve.

Heck also has built relationships with senior House Republicans and is chairman of subcommittees on the House Armed Services and House Intelligence committees that dovetail with his military expertise.

But things have changed. Increasing pressure from Republicans and the prospect of competing in an open race is causing Heck to take another look. Some people close to Heck say his concerns remain in place and his approach might be more a matter of performing due diligence in advance of making a decision he might otherwise regret — either way.

“After Sandoval, Heck is definitely the strongest candidate,” said a Republican in Washington engaged in recruiting. Still, at this point it’s difficult to determine whether Heck is “just going through the motions or is serious about running.”

“Over the coming weeks I am confident that it will become clear to Congressman Heck and his family and an announcement one way or another will follow,” Erwin said.

Besides the risks of running for higher office, Heck also must balance the risk of staying put. While he has won re-election twice in a district containing a relatively even number of Democrats and Republicans, he was not tested either time.

And the 3rd Congressional District has a history with so-called wave elections. Heck won his seat in 2010 in a Republican wave that swept away Titus, who at the time represented that district. Titus won the seat in 2008 in a Democratic wave that carried away Republican Rep. Jon Porter.

“It’s just a tough district and it doesn’t matter how hard you fight, you could be gone tomorrow, and Heck knows that,” said a Republican strategist.

Heck is not the only Nevada Republican who has met with party leaders. Lt. Gov. Mark Hutchinson met with Republican Senatorial Committee officials last month, but it was not clear whether it was at their invitation or his request.

Sen. Dean Heller, R-Nev., a vice chairman of the National Republican Senatorial Committee, confirmed the party is talking with Heck, and also others.

“I would certainly encourage him to take another look at this,” Heller said of Heck. “He initially said he’s not interested but I think he sees an opportunity there.”

But Heller said the Republican field won’t begin to take shape until after the Nevada Legislature adjourns and the party gets an official answer from Sandoval.

Nothing happens “until the governor says no, which he hasn’t said yet,” Heller said. “Everything points to that he might want to stay right where he is but the governor has the right to say no. So we’ve got 40 to 45 days until the session ends.” Then, Heller said, “the picture gets clearer.”

As Reid wraps up a long career, he has thrown his clout behind former state Attorney General Catherine Cortez Masto. He started talking her up on the same day he announced he was going to leave the Senate. He is hosting a breakfast fundraiser for her on May 14 in Washington.

But Titus, a longtime state Senate leader before coming to Congress, said she still is considering a campaign of her own even if it would mean giving up a safe seat in her Democrat-rich urban Las Vegas district.

Titus said she would not be influenced by the support lining up behind Cortez Masto.

“If it’s something I decide to fight for, I will, regardless of Senator Reid,” Titus said. “I’ve done it before, I can do it again.”

Eric Herzik, a political scientist at the University of Nevada, Reno, said Titus “doesn’t have to decide right away although the longer she waits the harder it is to line up supporters and money, and as always it will probably come down to money.