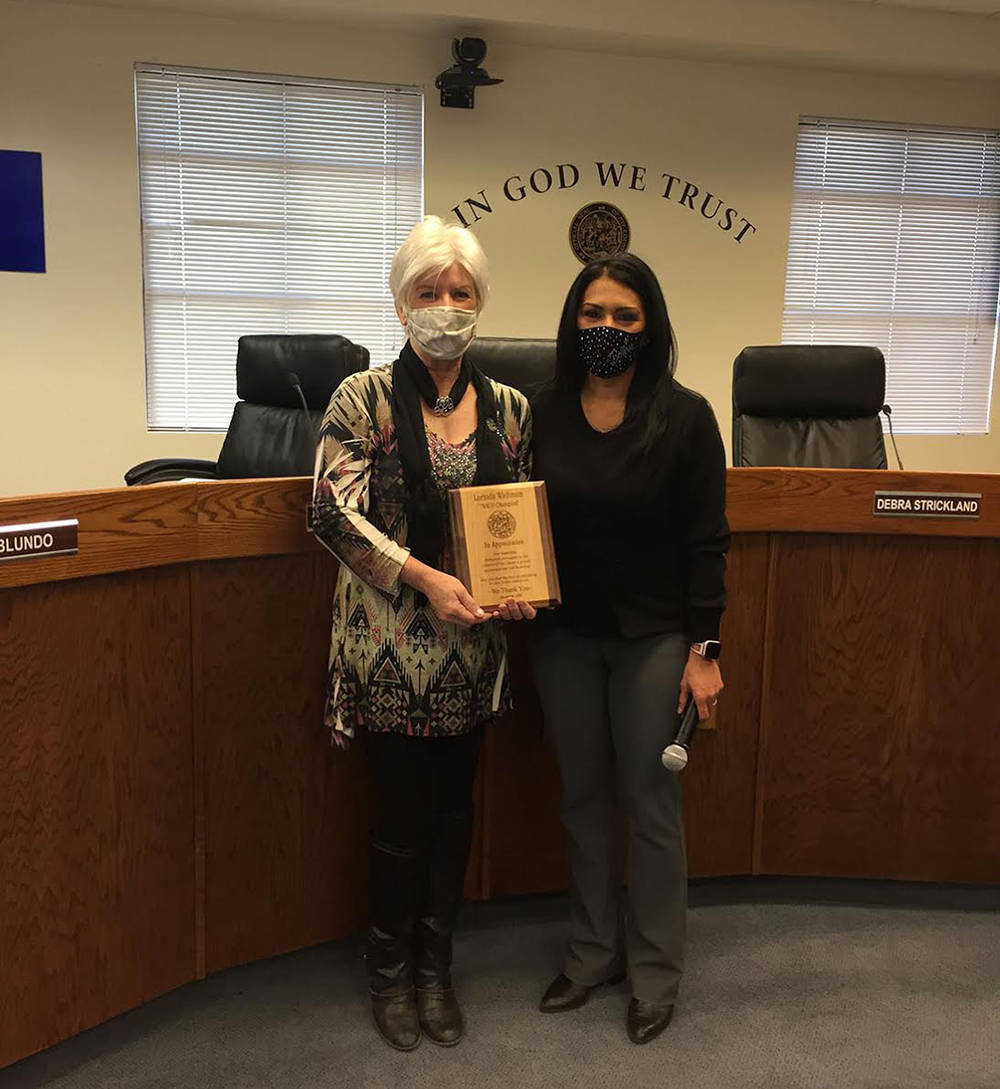 Special to the Pahrump Valley Times After 12 years on the board representing District 1, Nye County Commissioner Lorinda Wichman, at left, has officially reached her term limit and is bidding the board goodbye. 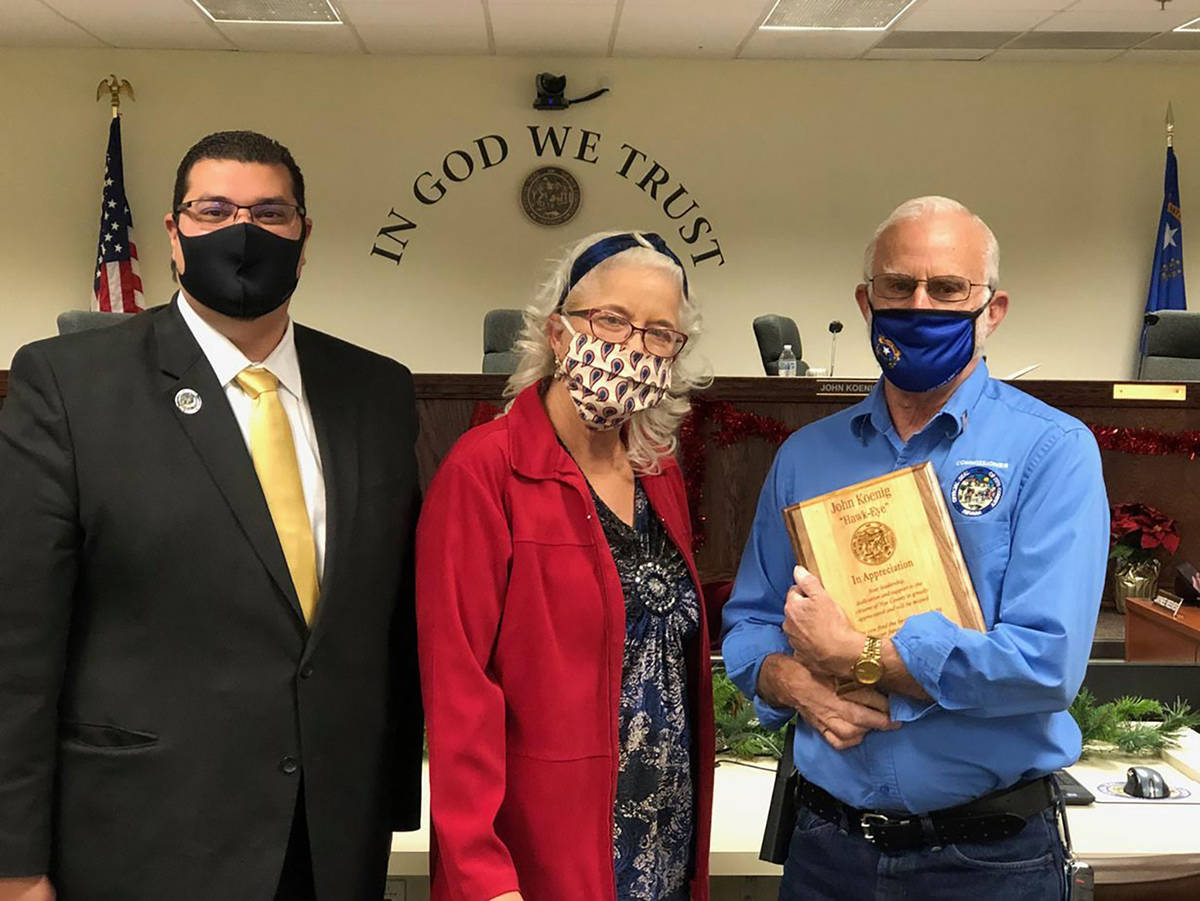 Special to the Pahrump Valley Times Nye County Commissioner John Koenig, at right, is also leaving the board as of January 2021, following four years of service as District 2 commissioner.

The year 2020 is only a day from becoming a thing of the past and with just a few days remaining in their terms as representatives of the people of Nye County, commissioners John Koenig and Lorinda Wichman are both preparing to officially step down from their positions and bid the board a fond farewell.

Koenig and Wichman are both now turning their attention to the future and for Koenig, that means time to spend pursuing his own personal interests and hobbies, while for Wichman, the future may hold even more public service, though what form that service may take still remains to be seen.

Elected to the board in 2016, Koenig took his seat in 2017 and has spent the past four years on the Nye County Commission. Over the years, there have been many projects and events that Koenig had a hand in navigating and he touched on a few of those that will live forever in his memories.

“I am extremely happy to have had the opportunity to serve Nye County for four years as District 2 commissioner. It has been, at times, a tumultuous term, from Storm Area 51 to COVID-19 to rats taking over the building and many other interesting events,” Koenig said in his farewell interview with the Pahrump Valley Times.

“I have been chairman of the BoCC for three years, I believe that is some sort of record,” Koenig said. “Being liaison to Amargosa Town Board was enough at times to be a full-time job, although it isn’t in my district. Being liaison to the Pahrump Veterans Memorial Advisory Committee was a fulfilling position, I think they got everything they wanted plus some. Although I am not a veteran, my brother would have been and that whole part of my life was in remembrance of him. I am leaving with the One Stop Shop nearing completion, this should allow easier communication between persons/firms who wish to set up a business in Nye/Pahrump and the departments they need to talk to.”

As to the achievement closest to Koenig’s heart as he readies to return to life outside of the political realm, Koenig said that would have to be seeing the new Pahrump Animal Shelter through from merely a concept to a reality, with funding to be secured as of today and a construction contract awarded.

“My favorite and lasting memory will always be the new Pahrump Animal Shelter,” Koenig remarked. “An animal shelter has been talked about for years and nobody seemed to take the reins and git ‘er done. I started this project about two years ago, thought I had found enough money to do it, then bids came in a couple million dollars over. We have gone out and secured a loan at 2% or less to build a brand new shelter, this will be voted on at the Dec. 30 meeting, my last. I leave with that happily under my belt.”

On the future and his plans now that the commissioner’s post will no longer be consuming most of his time, Koenig said he will be focusing on personal pursuits. “No regrets, my motorhome is full of gas, my list of to-do’s is seemingly getting larger by the day. If travel is allowed in 2021, we will take off cross country to visit my family. If not, the to-do list will get shorter.”

For Wichman, who was elected in 2008 and has served as the Nye County commissioner for District 1 for three consecutive terms, a total of 12 years, the closure of her time as a commissioner is perhaps even more poignant. She too is leaving behind a history filled with projects and events, struggles and triumphs and she took the time to express her appreciation for the people and experiences she has had the pleasure of working with and through over the years.

“Foremost, I wish to thank the voters of District 1 for the chance to serve Nye County, not once but three times. I have gained amazing friendships through the experience,” Wichman stated.

“I believe I am one of only a few who had the honor of serving the board as a project manager for the task of asserting jurisdiction on Nye’s minor county roads. The project spanned five years and gained state and federal recognition, for which I am very proud,” Wichman continued. “Additionally, I am happy to have served with several board members throughout my 12 years. All of them brought new experiences and points of view that broadened my viewpoint.”

Wichman also touched on the men and women behind the commission, staffers in the various Nye County departments upon whom Wichman relied as she strived to do her duties as a commissioner. “Nye County’s staff throughout the county is a source of pride. A better assemblage of skilled people would be a challenge to find. They are the greatest folks to work with,” Wichman told the Times.

“My heart swells with gratitude for all in Nye County where my roots have flourished,” Wichman said, concluding by adding just a hint as to what her future might hold. “I hope to continue my public service in some manner, so I’m not saying, ‘Goodbye,’ only, ‘See you later.’”

The new members of the Nye County Commission will take their seats on Monday, Jan. 4, 2021 for the first meeting of the new term. Koenig will be replaced by former commissioner Frank Carbone as District 2 representative while Wichman’s District 1 seat is to be taken over by Bruce Jabbour.