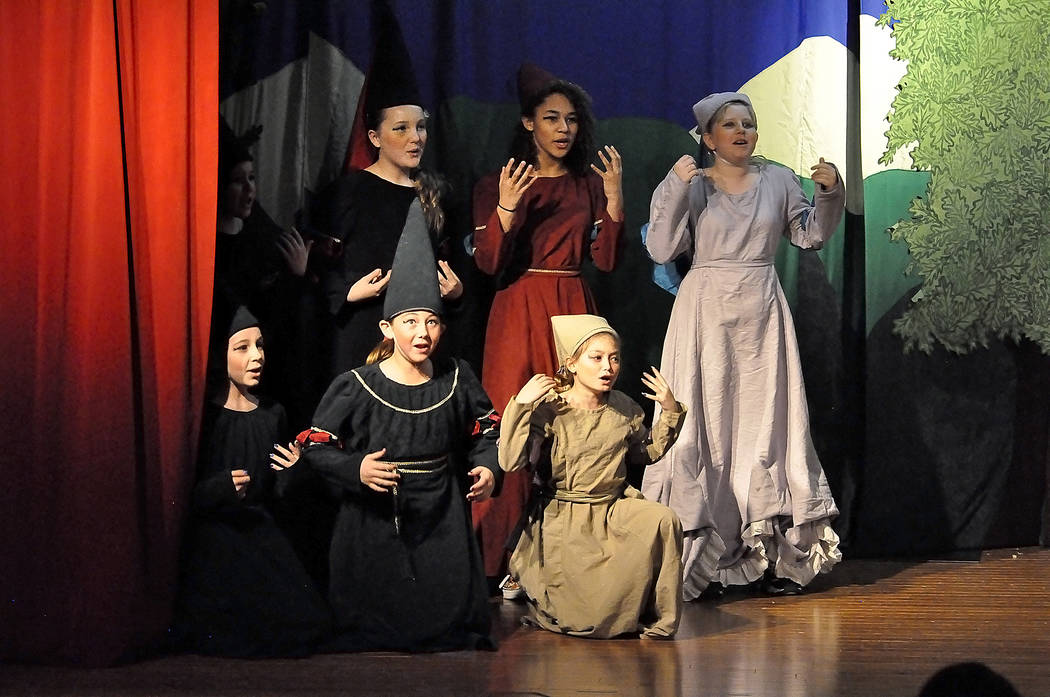 Horace Langford Jr./Pahrump Valley Times A group of school-aged girls played the damsels in distress in a performance of "King Arthur's Quest" on Jan. 20, 2018. The venue, produced by the Missoula Children's Theatre, was held at the Pahrump Valley High School and was sponsored by the Pahrump Arts Council. 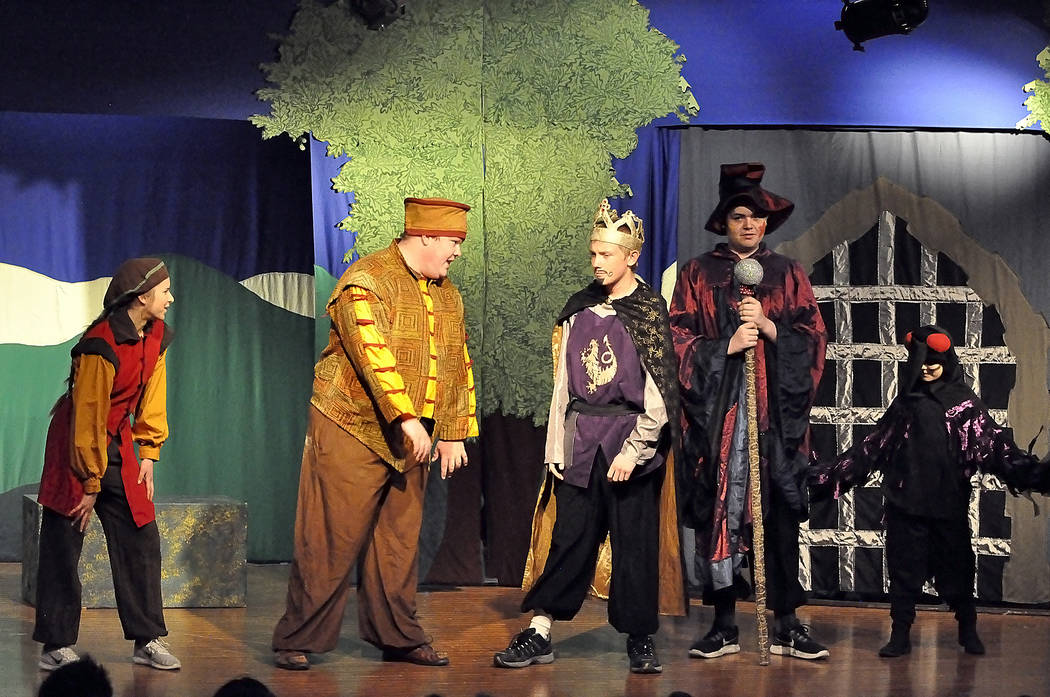 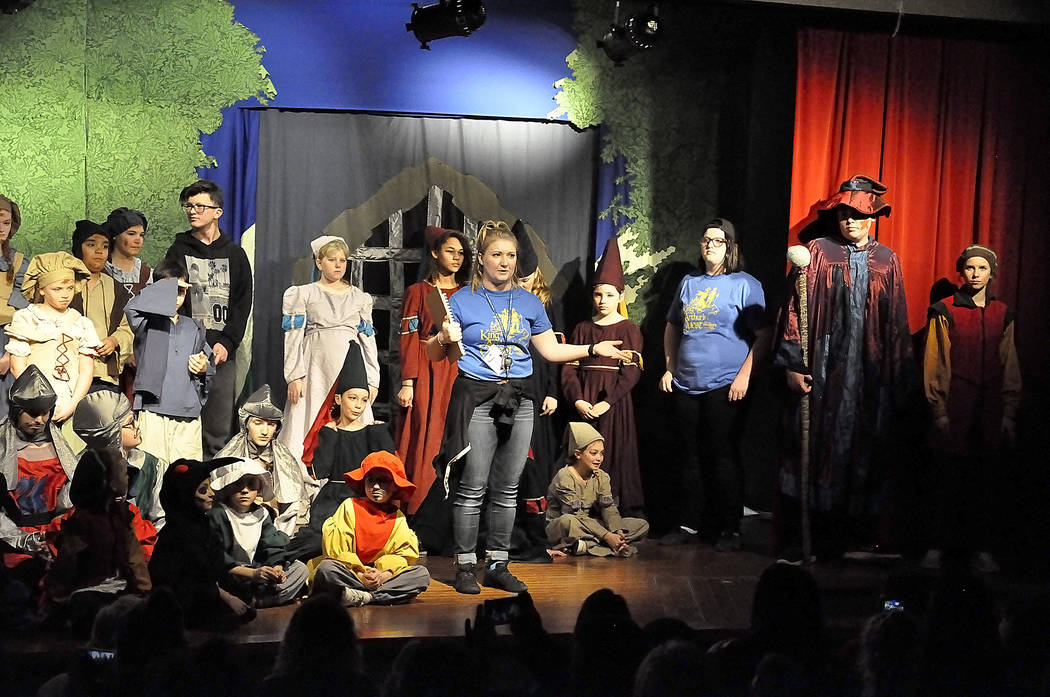 Horace Langford Jr./Pahrump Valley Times Carissa Lund, a director from the the Missoula Children's Theatre, stands in the center of the cast of "King Arthur's Quest" at the Pahrump Valley High School's auditorium on Jan. 20, 2018. Lund, along with Jonathan Handley, produced the local venue sponsored by the Pahrump Arts Council. Missoula is a traveling theater company that sends agents out to help locals put on performances. 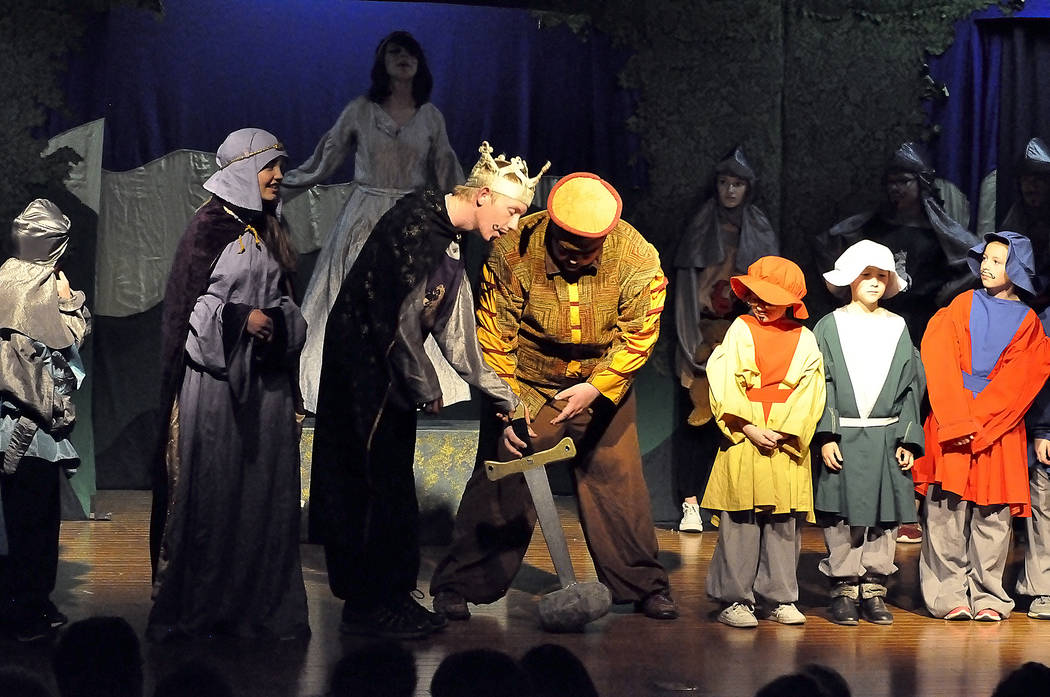 Horace Langford Jr./Pahrump Valley Times Ryan Wichael (King Arthur, left) stands next to Jonathan Handley (right) with a sword in the stone on Jan. 20, 2018 in "King Arthur's Quest" at the Pahrump Valley High School. To the left of Wichael is Makell Sharp (Guinevere). About 300 spectators attended the event sponsored by the Pahrump Arts Council.

The Jan. 20 event, sponsored by the Pahrump Arts Council, was produced by the Missoula Children’s Theatre — a theater company that has production staff move around the country and produce various shows. This is the art council’s 18th year backing the Montana-based theater company.

“King Arthur’s Quest” drew in about 300 people during its two performances on Jan. 20 that cast 50 school-aged children from the Pahrump area.

Some of the lead roles were played by Ryan Wichael (King Arthur), and Makell Sharp, who played Guinevere. Merlin was played by Matthew Duncan.

Wayne Walker, the 2018 president for the Pahrump Arts Council, said the performance took in about $1,000, though the nonprofit’s cost to put on the play ran about $4,500.

Support through the Nevada Arts Council, private donations and the Pahrump Arts Council Youth Arts program made the performance possible, said Loretta Lindell of the arts council in an email.

But the arts council needs continued support and new members.

Walker said the nonprofit is going on a membership drive and is looking to gain support from residents and from the local business community as well.

Some parents of the cast showed their support for the cast and the show already.

“Thank you Pahrump Arts Council and Missoula Children’s Theatre for this wonderful program,” said Cheryl Anne Cline. “This makes my daughter’s third play and she falls in love with the theater more each year.”

Another parent of a performer in the King Arthur production, Traci Smith Wills, thanked the arts council for having the play and that she “loved” having her daughter be a part of the show.

For those looking to get a keepsake of the performance, DVDs are scheduled to be available by Feb. 28. Each copy is $5. The arts council will have enough for families that have pre-paid for DVDs. The nonprofit can also make more copies if needed, Lindell said.

For more information on becoming a member of the Pahrump Arts Council, getting a copy of the DVD or ways to support the organization, contact the nonprofit at 775-751-6776.