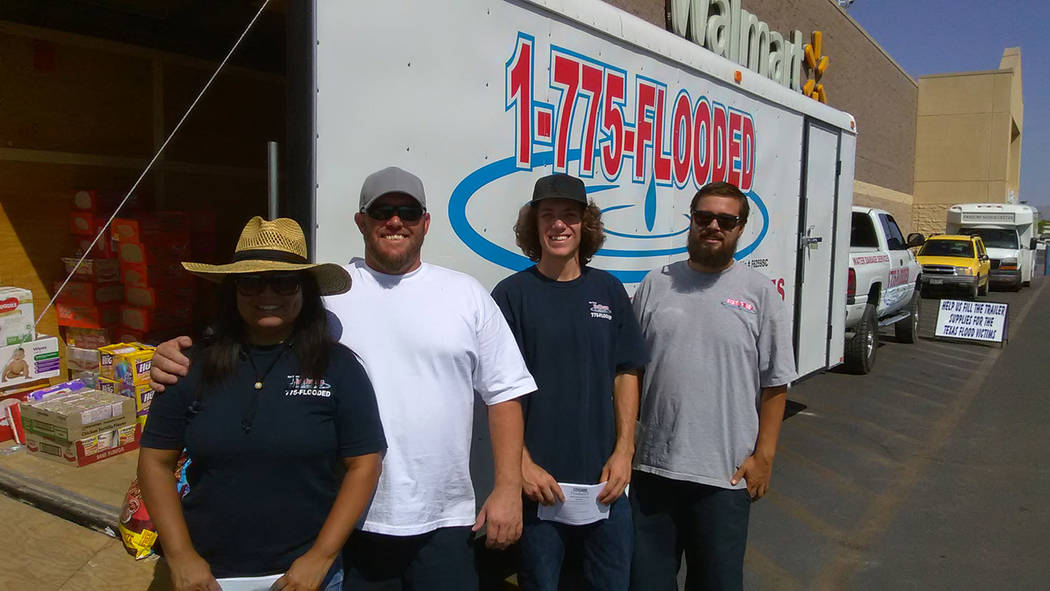 As floodwaters from Hurricane Harvey continue to recede this week, efforts are underway to assist the tens of thousands of south Texas residents affected by the destructive storm.

Locally, one man is taking it upon himself to provide relief to the victims.

Trevor Maxwell, owner of 1-775-Flooded on West Basin Avenue, accepted any and all donations, while in front of Walmart from 7 a.m. to roughly 3:30 p.m., on Friday.

All told, Maxwell and his employees collected hundreds of items bound for south Texas.

“The day went quite well and we expected to be there for three days,” he said. “When we left, the trailer was completely full all the way to the back door. We actually had to draw the line because people were standing there who said they were going in and they’ll return with donation supplies. We took the truck and trailer to get it weighed, and we ended up being 140 pounds overweight. We are at a total of 16,000 pounds. We are still getting a lot of calls from people who want to donate, but we are not able to take any more supplies, obviously.”

Maxwell said he just wanted to do anything to help those displaced by the flooding, after viewing the images of destruction over the past week.

“The victims of Hurricane Harvey obviously need a lot of help, because just about everybody walked away from their houses with just the wet clothes they had on their back and the shoes they were wearing,” he said. “After the victims leave the shelters, they don’t have places to wash their clothes.”

Prior to collecting the supplies, Maxwell said he made calls to several shelters around the Houston area to gauge what kind of supplies are needed most by individuals and families.

“They told me they were actually stocked up on supplies and donations, so we are now focused on an outreach right now, helping people get back into their homes,” he said. “We are going to go wherever we are needed. We will address it while we are en route because things change on an hourly basis during crises such as this one.”

Additionally, Maxwell spoke about the aftermath of the flooding and power outages in the affected areas, while noting he also provided assistance to victims of another severe hurricane back in 2008.

Ike was responsible for an estimated 74 deaths, along with causing $37.6 billion worth of damage.

“With people being away from their homes, the water is going to recede and drain out, but these homes will still be without power,” he said.

Additionally, as a flood remediation expert, Maxwell spoke about the mitigation efforts now underway in south Texas, where black mold is a big concern.

He noted that it’s not as simple as responding to a home flooded by a broken pipe, as water could have entered a home after flooding a cattle pasture.

“In Texas, it’s a much different situation,” he said. “It’s called a ‘category 3’ situation, where the water is essentially treated like sewage because we don’t know what exactly is in the water. There is going to be mold in those homes so they will have to pull out all of the carpeting. When we are talking about a category 3, you are supposed to remove everything the water touches, including the drywall and flooring. On many occasions the furniture is cleanable, but if you have fabrics, you are better off just replacing them.”

Maxwell also noted that electricity must be restored, in order for work to begin.

“You can’t do anything without power to the homes because you’re going to use drying equipment, which requires power,” he said. “The homes will just sit there and that’s a very bad situation all the way around. Many of those homes may have to be razed and there are houses that are already going down as we speak. There are also a lot of older homes there that would be questionable whether they are worth renovating or not. There are also a lot of new homes out there that just have to be rebuilt.”

On the issue of local donation efforts, Maxwell said the residents of Pahrump exceeded his expectations.

He also gave thanks to Walmart and Pahrump’s Quality Signs business for their respective assistance.

“Pahrump has really stepped up for this effort,” he said. “The Holiday Inn Express has donated bedding supplies, which will be a truckload in itself,” he said. “The local PAWS, (Pets are Worth Saving) organization showed up with an additional 500 pounds of dog food or more.

“The whole response was amazing from the local community,” Maxwell said. “Pahrump really came together and showed its generosity. I actually think that there will be a need for a second trip to Texas. That’s still up in the air.”