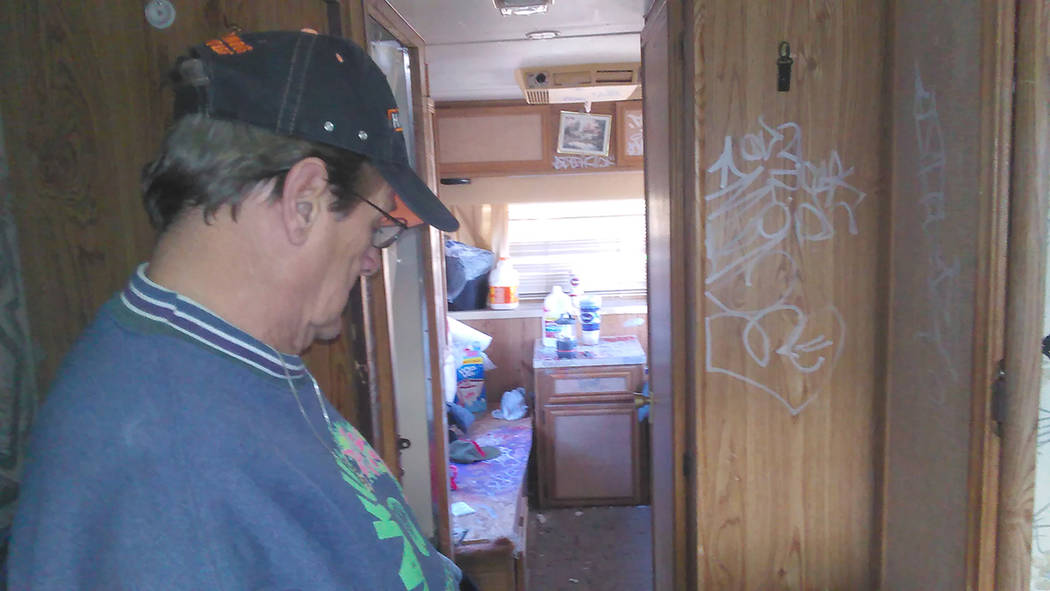 Pastor Arthur Charette inspects the motorhome he allowed several homeless individuals to use for shelter from the cold. The pastor is puzzled as to why the individuals would vandalize their temporary home. The vandals also spray-painted obscenities on the walls of the coach. Selwyn Harris / Pahrump Valley Times 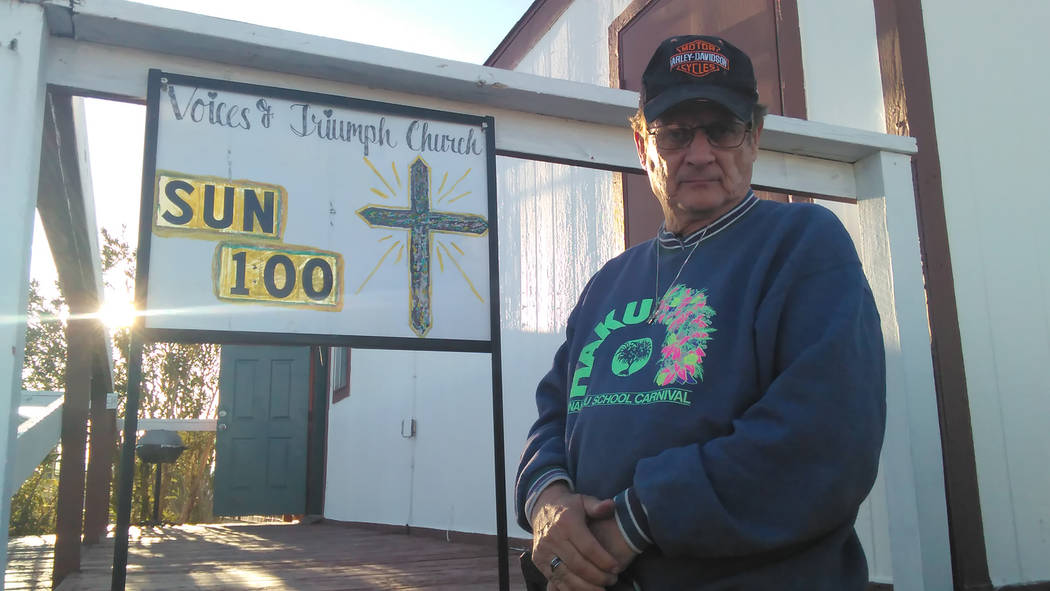 Pastor Arthur Charette stands in front of the Voices of Triumph Church on Emery Street. The church currently has approximately 25 members. Some of the reported vandalism that the owner said was left behind included anti-Semitic references to his Jewish heritage, which Arthur Charette described as “a little bit of Jewish blood.” Selwyn Harris / Pahrump Valley Times

According to the old English proverb, no good deed goes unpunished. For Pahrump church pastor Arthur Charette, he said his faith is being tested.

Charette, pastor of Voices of Triumph Church on Emery Street, discovered widespread vandalism on the property last month. According to the pastor, the vandalism was at the hands of several homeless individuals he tried to help.

Charette said the incident must have occurred just recently, as he generally leaves the individuals alone.

He first noticed the incident after cutting off the power to the motorhome as a result of high electricity bills.

Additionally, Charette said it will cost him more than $1,000 to repair all of the damage to the motorhome.

“I’m going to have to put new paneling inside,” he said. “Before they had moved in, this motorhome was in great condition and clean. There were two mattresses inside. They ripped up the carpeting and there were beer cans everywhere and they even destroyed the Bible I gave to them. I let them stay here, but I did not make them sign any kind of agreement.”

Since 1984, Charette said he’s been devoted to helping the homeless and those less fortunate, where he was head of a church in Orange County.

He has been a Pahrump resident for nine years.

“I took care of a lot of homeless people,” he said. “I would provide them food and shelter. I took in one family in Pahrump who had a 9-year-old child. I was able to help them out and get them on their feet.”

One seeming success story Charette mentioned was a young man who is also living on the property.

Alex Lawton was recently homeless before Charette took him in.

Lawton was living in Petrack Park at the time Charette became known to him.

“I was homeless for about three weeks before Pastor Arthur picked me up,” he said. “I was a heavy drinker and I think that’s what contributed to my homelessness. I’m doing much better now and I study the Bible every day. I also like to help clean up around here. I have been sober since December 20 of last year and I haven’t really been tempted to start drinking again. I am going to maintain my sobriety because I was working at Albertsons, but I lost that job due to my substance abuse. I have learned a very valuable lesson after living at Petrack Park.”

Lawton also noted that he actually knew the individuals who vandalized the motorhome.

“I knew them from the park and became very close to them at one time,” he said. “This whole thing is very shocking because the pastor came here and created this church because he wanted to help people. Unfortunately, some of them destroyed what he gave them.”

Even after the incident, Charette did not appear to be dissuaded from his mission to help the homeless and those less fortunate.

“Even though my faith has been tested, I will keep on trying,” he said. “When you try to help somebody and they betray you, it’s kind of heartbreaking. Off and on over the years, I have taken people in and helped them. I will continue to do just that. ”

Voices of Triumph Church has roughly 25 members. Services are each Sunday at 1 p.m.

“I don’t pass a bucket around or collect offerings,” Charette said.

While the pastor was discussing the issue, a Nye County Sheriff’s deputy arrived to take a report. A couple of inquiries to the sheriff’s office on the status of the investigation were not returned by press time.