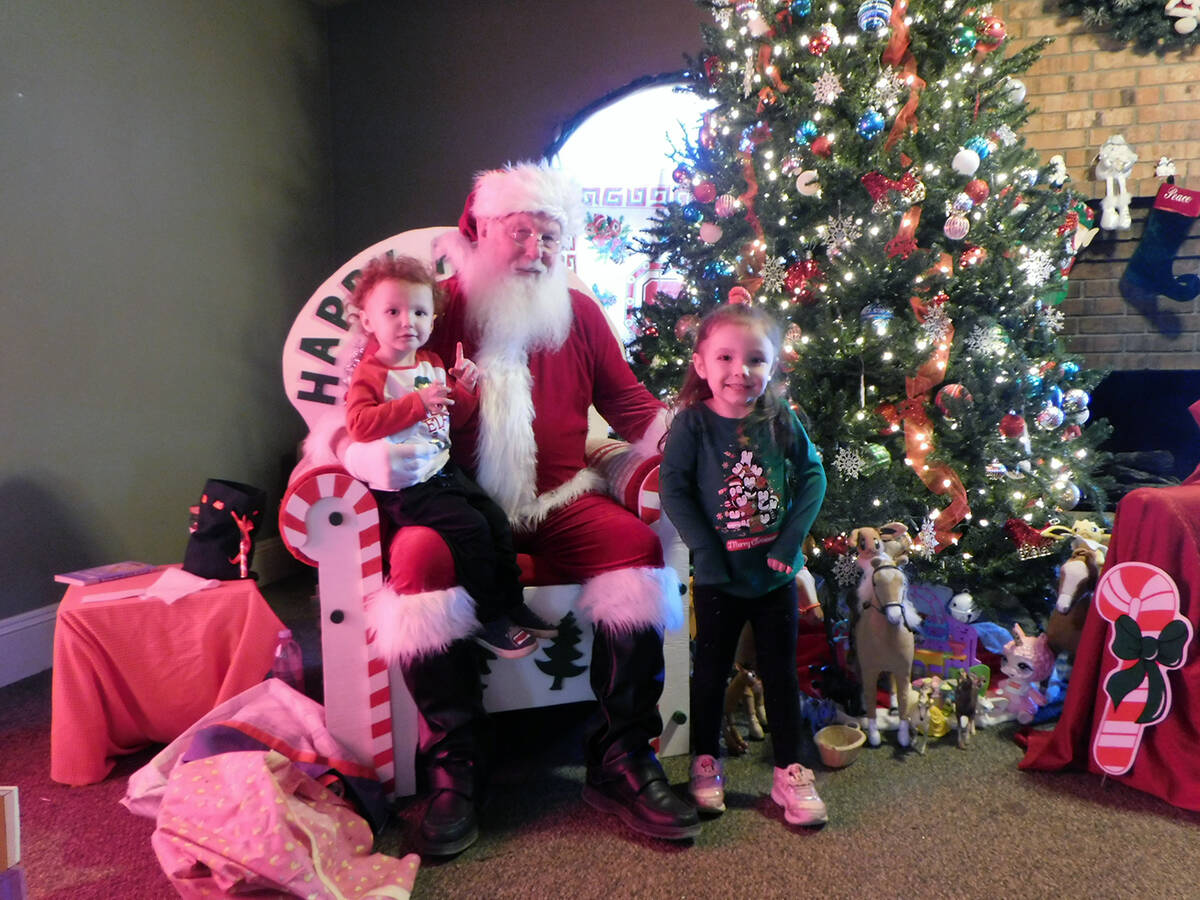 Robin Hebrock/Pahrump Valley Times Santa Claus spent much of the last weekend at the Salvation Army in Pahrump, taking photos with area families and pets in an effort to help raise funds for Nye County Sleep in Heavenly Peace. 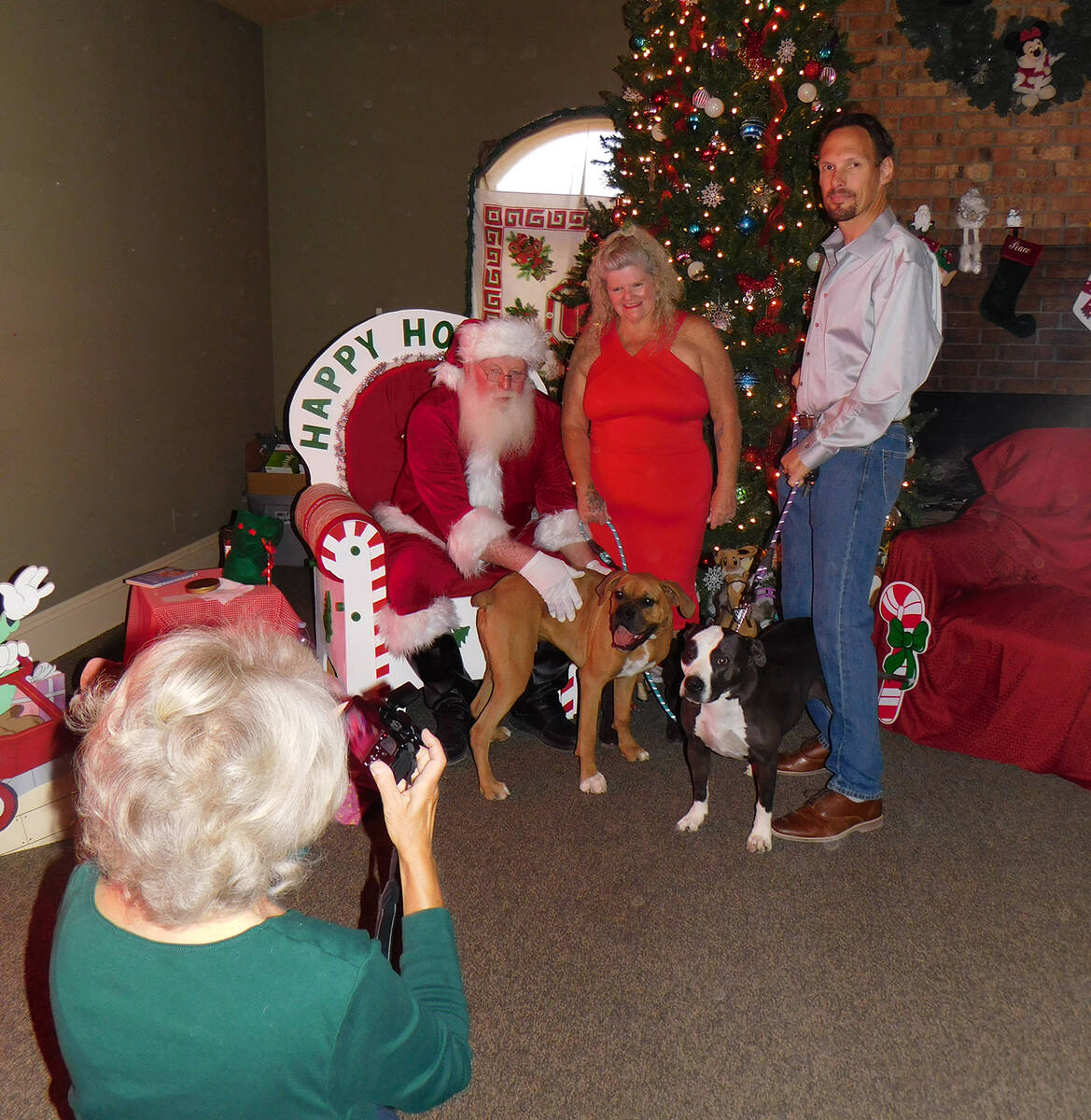 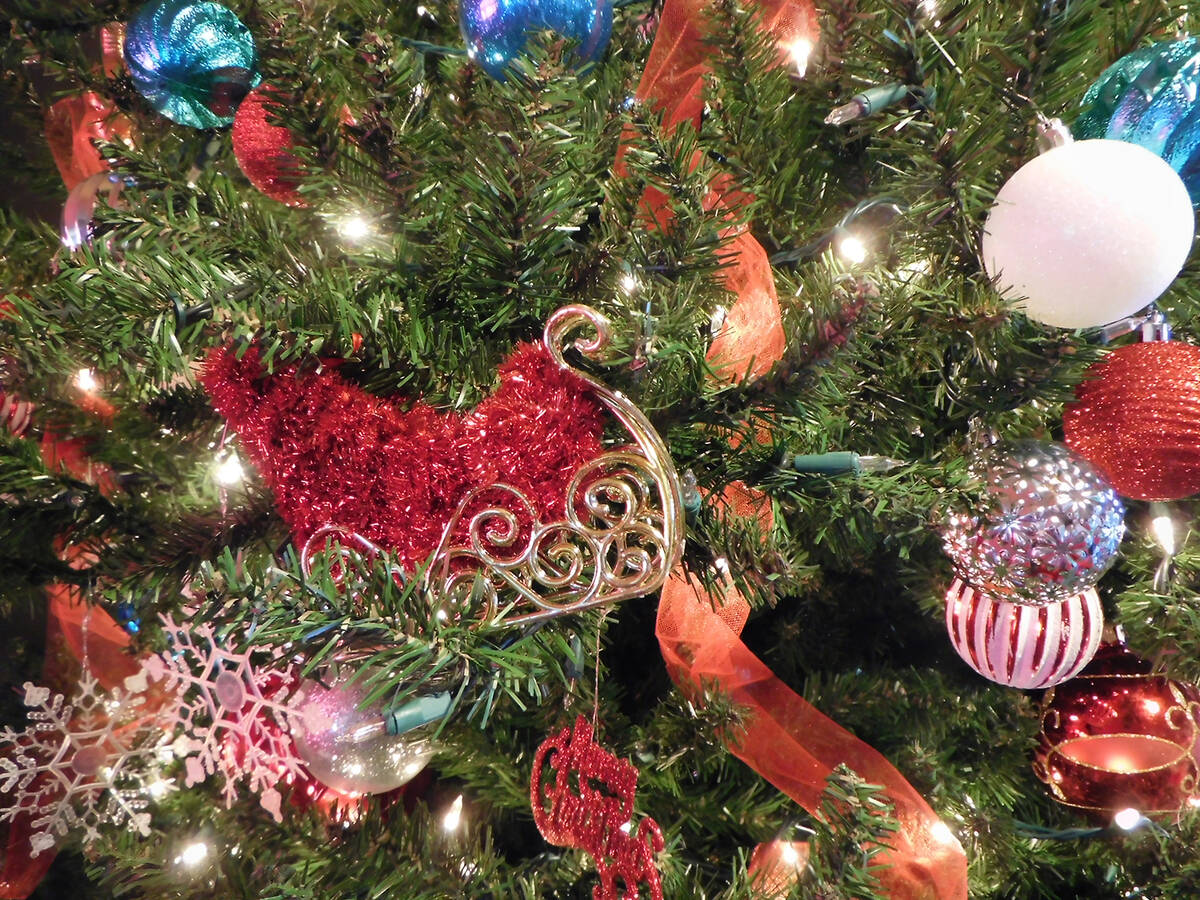 Robin Hebrock/Pahrump Valley Times The Christmas Tree at the Sleep in Heavenly Peace fundraiser was adorned with all sort of holiday baubles and ornaments. 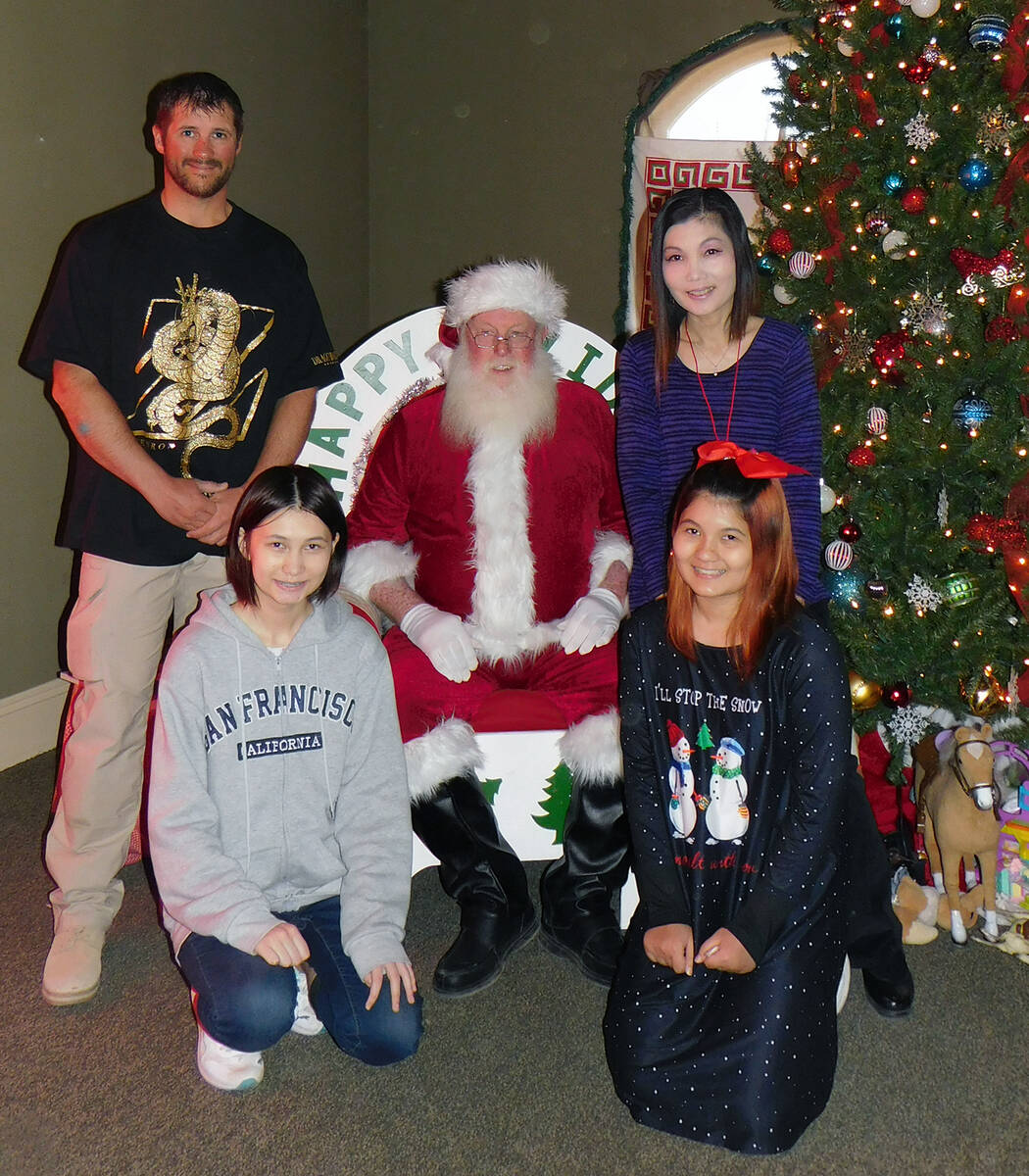 Robin Hebrock/Pahrump Valley Times A family of four smile brightly as the pose for their picture at the Sleep in Heavenly Peace Photos with Santa fundraiser. 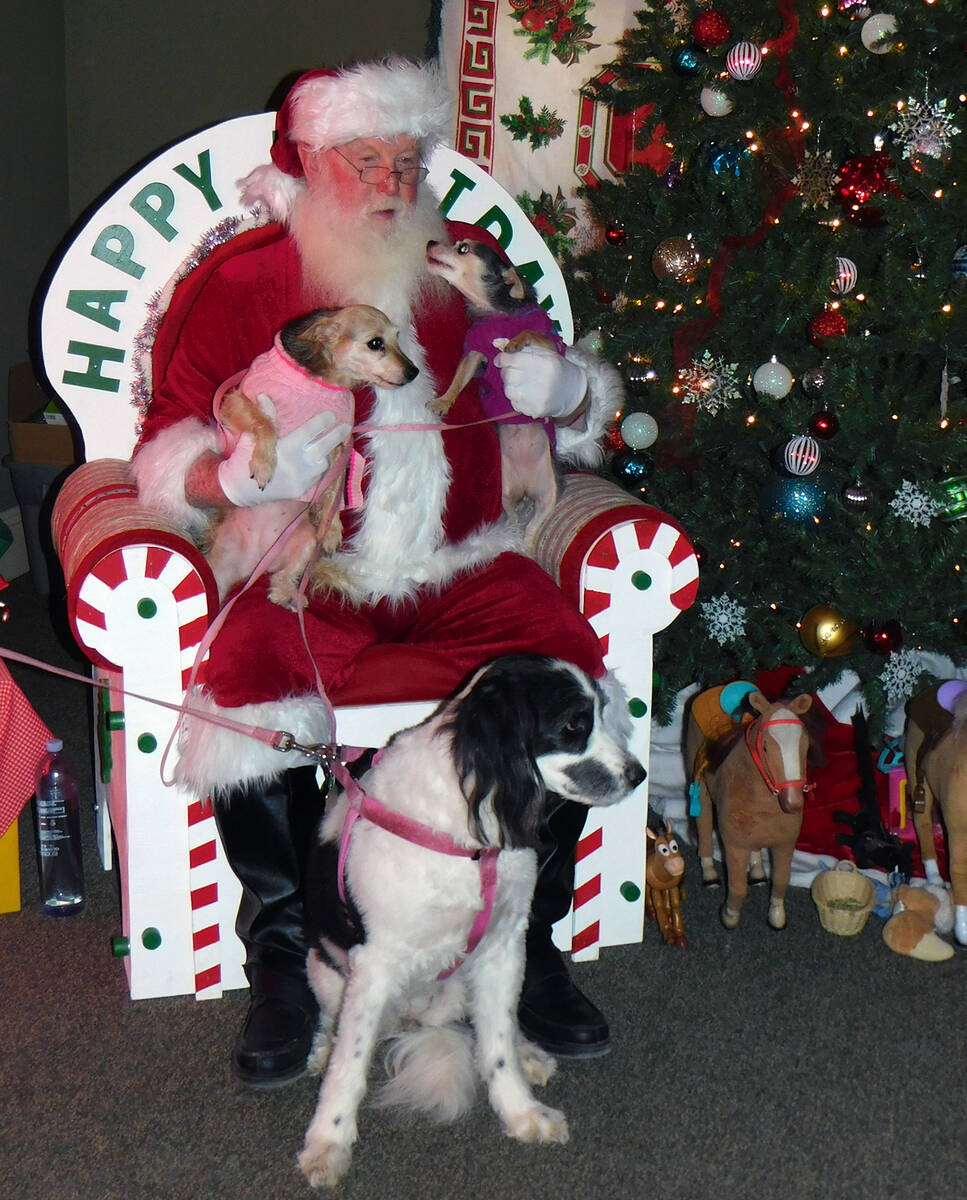 Robin Hebrock/Pahrump Valley Times Santa enjoyed spending time with the valley's furry friends as well as its human residents during the Photos with Santa fundraiser held by Nye County Sleep in Heavenly Peace. 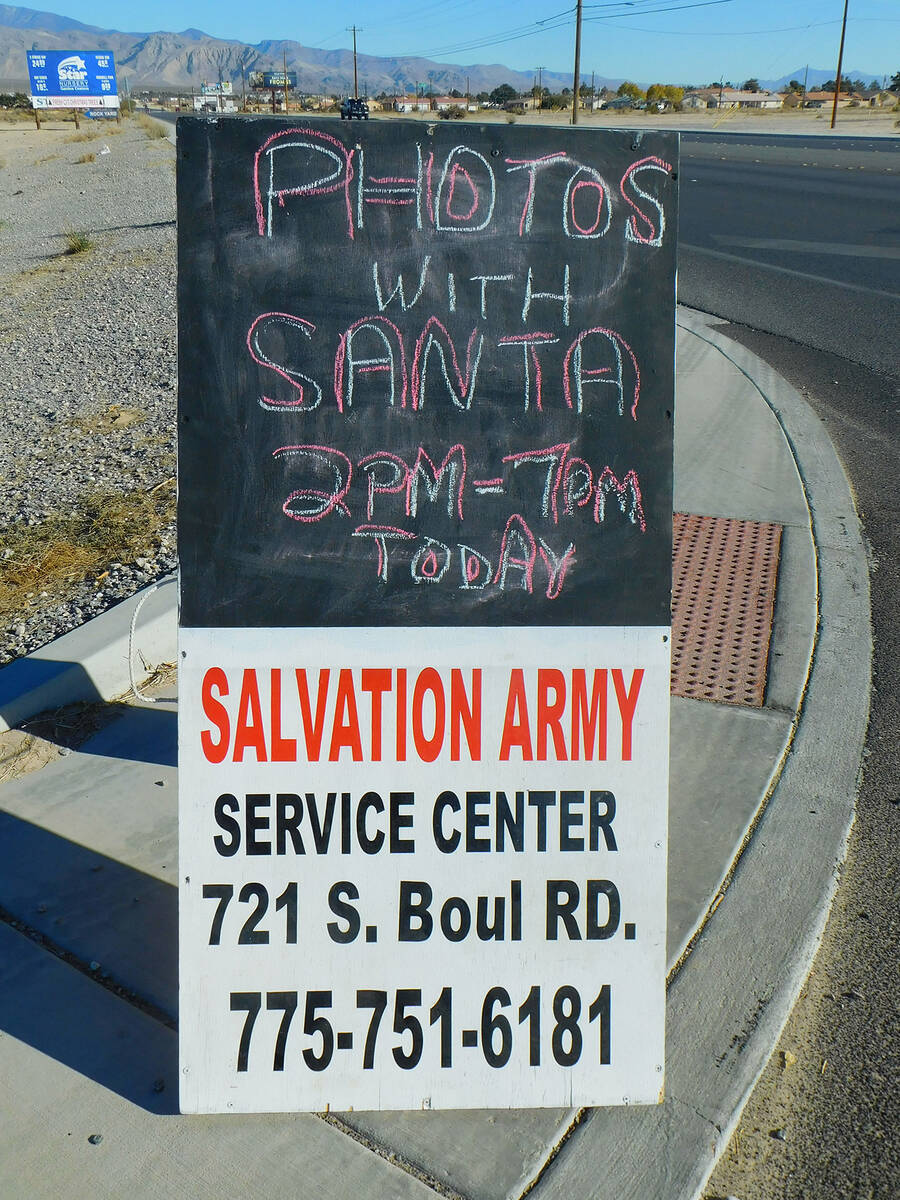 Robin Hebrock/Pahrump Valley Times A sign announcing a Photos with Santa opportunity will be placed at the corner of Buol Road and Highway 372 on Friday and Sunday, Dec. 3 and 5 for the next round of Sleep in Heavenly Peace fundraiser.

When arriving onsite on Saturday, the Pahrump Valley Times found a venue that was decked out in Christmas style, with a large Christmas tree strewn with baubles and trinkets, lights and garland, and a big chair bearing the message, “Happy Holidays” was set in the place of honor right beside the tree, ready for Kris Kringle. At its side sat bags filled with little toys for the children and even some treats for the pets, and Santa himself was smiling with anticipation of all the joyful exchanges to come.

There were wooden displays of beloved animated figures of childhood and cookies and coffee spread on upon a table. Sleep in Heavenly Peace members were dressed in their holiday best and local chapter president Carmen Murzyn was outfitted in a full elf costume, complete with hat and pointed shoes. All was in readiness as the fundraiser was opened at 2 p.m. that afternoon and not long after the event kicked off, the first patrons of the day made their way inside.

Murzyn said she was quite happy with the way that the decorations had turned out and she was looking forward to a successful effort, expressing her profound wish that this year’s fundraiser would prove more successful than the group’s first Photos with Santa event in 2020. She was trepidatious, however, noting that while there were certainly people who had come through the day before, she had hoped to see more. Nervous though she was, it proved unnecessary, as by the time the Photos with Santa event wrapped up on Sunday, the group had already surpassed its last year’s total raised by a healthy margin, and there are still two more days of fundraising to go before the group will call it complete for 2021.

“We did photo sessions with about 20 groups so far, including families, young children and people have even been bringing in their pets too, with lots of doggies taking pictures with Santa,” Murzyn reported following last weekend’s effort. “We think it’s going well so far and we’re looking forward to doing our Photos with Santa again this coming Friday and Sunday.

“Thanks to the great articles in the Pahrump Valley Times, we received an incredibly generous donation,” Murzyn continued. She detailed that while the fundraiser was underway, an unnamed woman showed up, walked up to Murzyn and asked, “Is this for Sleep in Heavenly Peace?” Upon Murzyn’s confirmation, the woman handed over a $500 check, bid her a Merry Christmas and made her exit just as quickly as she’d come, leaving a flabbergasted but very delighted Murzyn staring after her. Just that one donation alone was enough to push Sleep in Heavenly Peace well past the total raised in 2020.

“And we have received other donations as well, in addition to the money generated by those paying for their photos with Santa,” Murzyn added. “Last year, we collected around $250 during our Photos with Santa fundraiser so we have already exceeded that amount and we couldn’t be happier! We hope that anyone who hasn’t had the chance to come out and get their own pictures with the man in the big red suit will come down on Friday and Sunday this weekend and help us make this fundraiser even more amazing.”

The next round of Sleep in Heavenly Peace Photos with Santa will take place on Friday and Sunday, Dec. 3 and 5 at the Salvation Army, 721 S. Buol Road, just north of Star Nursery. On Dec. 3, patrons will be able to stop in between 2 and 7 p.m. while on Dec. 5, the fundraiser will run from 3 to 6 p.m. Photos cost $8.50 for one or attendees can get a discount when buying two, which will cost $15. Members of the Sleep in Heavenly Peace team will be manning the camera and snapping the photos, taking their time with each group to ensure they are happy with their pictures before instantly printing them onsite.

Photos with Santa is not the only fundraiser slated to bolster the Sleep in Heavenly Peace coffers either, with the Pahrump Moose Lodge #808 getting involved as well. The Moose Lodge is well-known as an organization that lends its support to various nonprofits in town and come Dec. 11, the lodge will throw open its doors to the general public for a donation dinner, with all proceeds to go to Nye County Sleep in Heavenly Peace.

The donation dinner will feature delicious spaghetti, garlic bread and salad and all meals will be served on a donation basis. Whatever a person can afford to give would be more than welcome, Murzyn said, and she emphasized that every dollar raised, both through Photos with Santa and through the Moose Lodge Donation Dinner, will be used to build and fit out new beds for children in our local community who do not have a bed of their own. This mission to ensure no child has to sleep on the floor is at the very heart of what Sleep in Heavenly Peace does and Murzyn noted that all those who assist the cause should know just what an incredible impact they are having on the lives of the next generation.

In addition to the donation dinner itself, there will be various other money-making means employed at the Moose Lodge event, including a bake sale with homemade goodies. “There will be fudge, oatmeal cookies and pizzelles, which are thin, Italian pressed cookies, just to name a few,” Murzyn said, giving readers a small taste of what will be available.

There will also be a variety of baskets up for raffle and a 50/50 raffle as well. Tickets for the raffles will be $1 each or $5 for six.

Donation dinner attendees can also expect some live entertainment to liven the atmosphere, with singers and dancers offering their talents for the evening.

The Moose Lodge Donation Dinner to support Nye County Sleep in Heavenly Peace is set for Saturday, Dec. 11 from 4 to 7 p.m. The Moose Lodge is located at 1100 Second Street.

While raising funds to purchase all of the construction materials and bedding necessary when giving new beds to kids in need is obviously imperative, Murzyn was quick to note that bed recipients are just as important. Without families signing up to receive a bed, Sleep in Heavenly Peace would not be able to continue its efforts. She urged anyone who knows of or has a child in need of a bed to go to www.SHPBeds.org to register for a free bed to be built and delivered by the Nye County Sleep in Heavenly Peace team.more information on the local Sleep in Heavenly Peace chapter’s activities and mission, contact Murzyn at 775-910-8921.