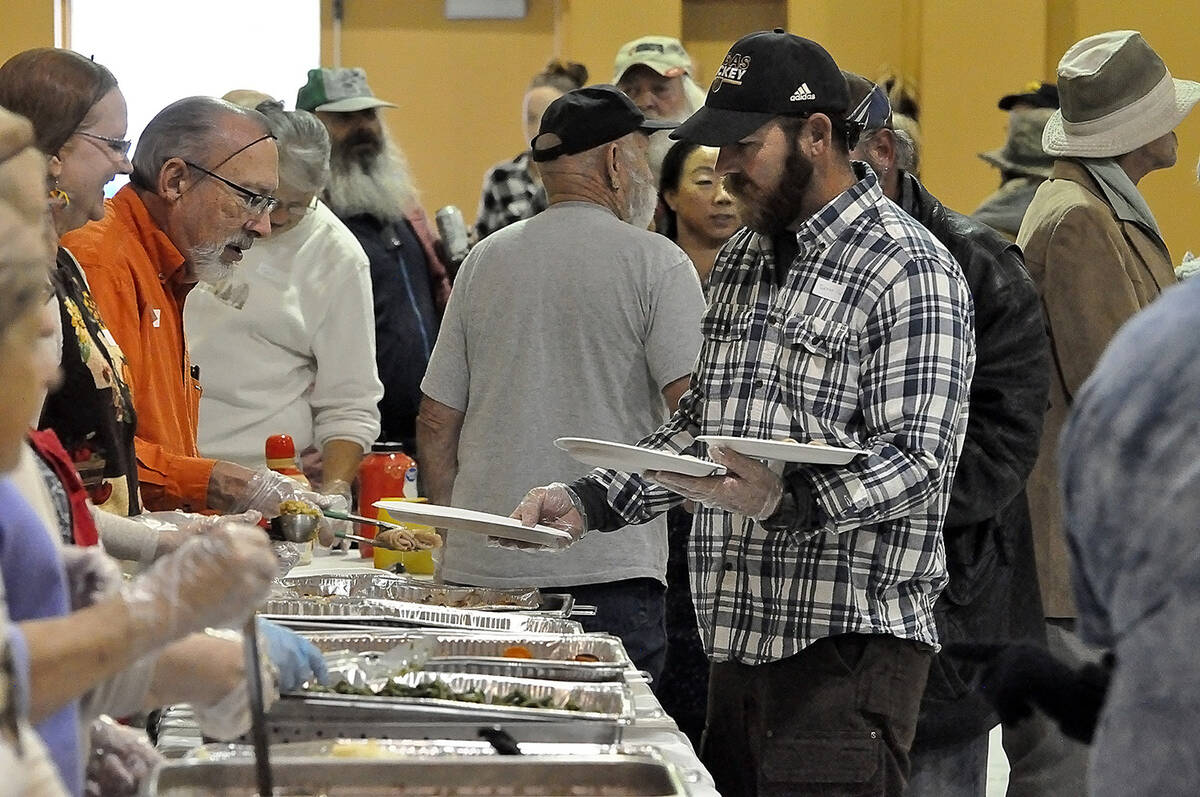 Horace Langford Jr./Pahrump Valley Times This file photo shows the scene at the 2019 Community Thanksgiving Dinner, where a buffet of holiday eats was available to attendees. In 2020 the dinner was held as a curbside pick-up but this year, the Pahrump Holiday Task Force is able to resume its usual in-person event. 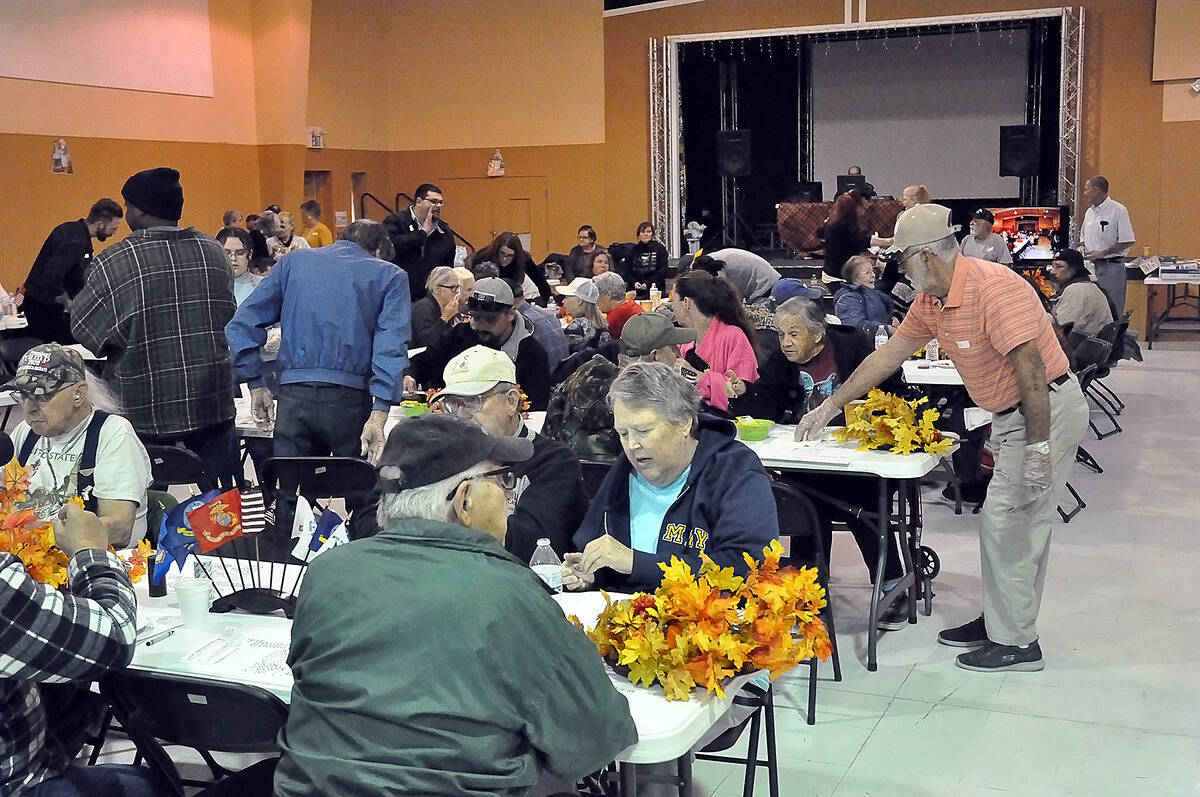 The Thanksgiving holiday is just around the corner and once again, the Pahrump Holiday Task Force is immersed in preparations to host its annual Community Thanksgiving Dinner, which is set take place as an in-person, sit-down dinner with buffet-style service for the first time since 2019.

“We are very excited to have everyone be able to come and join us at a sit-down dinner this year,” Pahrump Holiday Task Force Chair Linda Wright told the Pahrump Valley Times in an interview earlier this week. “We are looking forward to having people come and join us for a meal with the true, communal feel that Thanksgiving is all about.

“We appreciated everybody coming out last year for our curbside pickup, that was our way of making sure that everyone at least had a meal for the holidays,” Wright continued. “And coming up to the event this year, we were flexible, because we weren’t sure what was going to happen so we were prepared to do it either way. But we are delighted that things worked out to where we could actually have everyone come to the coalition and enjoy Thanksgiving together.”

The menu this year will incorporate all of the traditional Thanksgiving goodies, including roast turkey, mashed potatoes and gravy, dressing, green beans, rolls and of course, lots of pie for patrons to devour. There will be coffee, tea and water available as well and Wright was quick to note that the valley’s veterans will be given special service at the event, with their own dedicated tables and servers to bring their meals directly to them.

“We’ve been rolling right along with our preparations this year,” Wright said, noting that one of the things that had really helped with prepping for the dinner was the initiation of a new advertising feature.

Rather than simply going out and asking businesses for a donation to support the cause, the Pahrump Holiday Task Force devised a way to raise money while also giving the businesses a little something in return. Placemats for the tables will all have advertisements on them, with ad slots sold over the course of the last few weeks. This effort was such an amazing success that Wright was thrilled to report that all ad slots were completely sold out.

“I had a very good committee who went around town, putting out the 501(c)3 letter from Heritage Bible Church, which is the nonprofit we have been operating under until we get our our 501(c)3 status secured, and selling the placemat advertising slots. We had 12 $25 slots, four $50 slots, four $100 slots, four $200 slots and one $500 slot and we are very happy that they are all sold,” Wright enthused.

In total, the placemat advertisement initiative earned the task force $2,200 which will help greatly as the committee purchases its necessary supplies for the event.

The advertisements will be printed on one side of the placemats while the reverse side will be available for coloring, with crayons laid out on the tables for the kiddos to enjoy. “We’ll have it set up to where one place setting will have the list of advertisements face up and the next having the coloring picture face up and so on, and we’ll be making an announcement to let people know they can flip their placemat over. We’ll also have a full list of donors at the front table and we’ll have ‘thank you’ signs placed all around the room as well,” Wright explained.

“This is a community dinner, it’s not just our holiday task force dinner,” she stated. “That’s what the task force is all about, community. We want to stress that we do this for the community and we want to partner with the community. We thought the advertisements would be a good way to encourage donations while also giving those businesses the chance to get the word out about their products and services.”

At this time, the task force is already working on selling its placemat spots for its Community Christmas Dinner and if the Thanksgiving placemats are anything to judge by, these will go fast. Anyone interested in purchasing one of those slots can reach out to the task force by emailing pahrumpholidaytaskforce@gmail.com

As for other necessities, Wright said she is looking for additional volunteers this year, who will play a vital role in the event by greeting attendees, escorting them to tables, assisting with the buffet service and cleaning up tables, as well as helping to break down the event when it’s over.

Monetary and food donation are always appreciated as well, with Wright noting that any donations of turkeys would be particularly welcome as the task force is looking at purchasing those and with supply chain issues causing a pinch, prices have gone up.

In addition to the buffet dinner, there will be entertainment this year in the form of a DJ duo, J&D, who will be providing music throughout the event and Wright added that there will be cold-weather items available as well. “We will have a room set up and while we won’t have jackets available, we’re working to get some blankets and we will definitely have some knitted hats to hand out to those who need them,” Wright detailed.

It is important to note that COVID-19 guidelines will be followed at the event, with Wright stating that all sanitization procedures will be closely adhered to, volunteers will be gloved and masked and all attendees will be required to wear a mask while they are not sitting at their tables. “We’re following everything like we are supposed to so we can have this as a sit-down dinner,” she remarked.

In conclusion, Wright emphasized that this event is for the entire community. “It’s for those in need as well as those who might be just want some good company for the holiday. That’s what we try to do,” she said. “And we are so thankful to the community for helping us out, they’ve just been awesome. So far, we’ve collected almost what it costs to put on these meals, and we couldn’t be more grateful.”