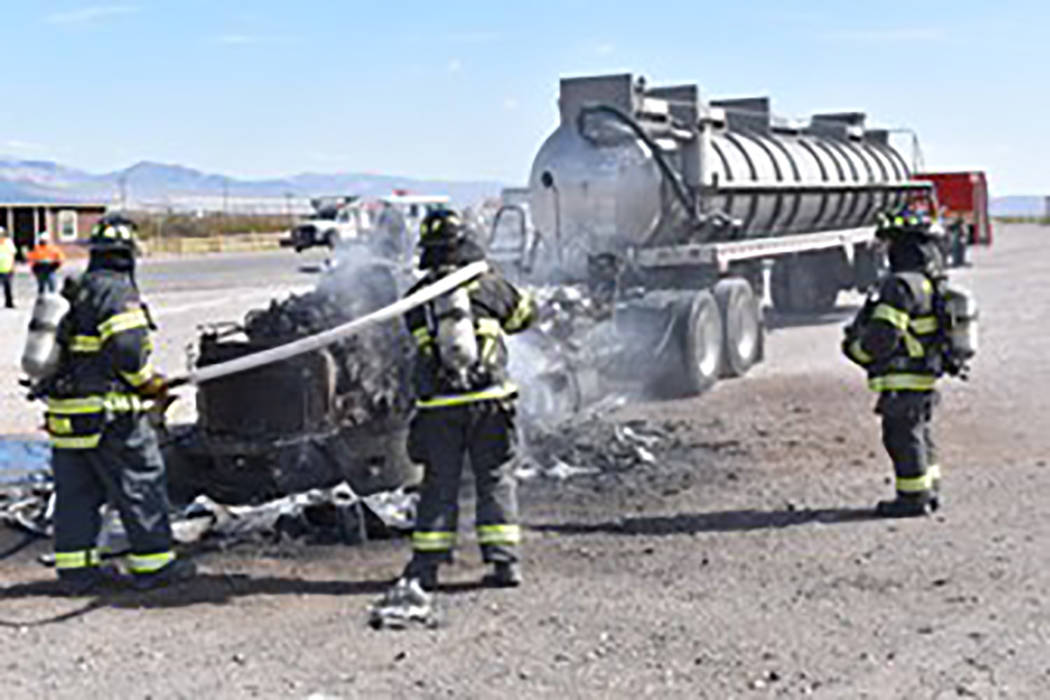 Special to the Pahrump Valley Times Pahrump fire crews were dispatched for a mutual aid assignment to Southern Inyo County in Shoshone for a semi truck fire just after 2:30 p.m. on Thursday April 4. Pahrump Fire Chief Scott Lewis said the Southern Inyo Sheriff’s Office halted traffic in all directions coming into the Town of Shoshone. Lewis noted that the initial investigation revealed a non-specified liquid hazardous material aboard the semi. No injuries were reported. 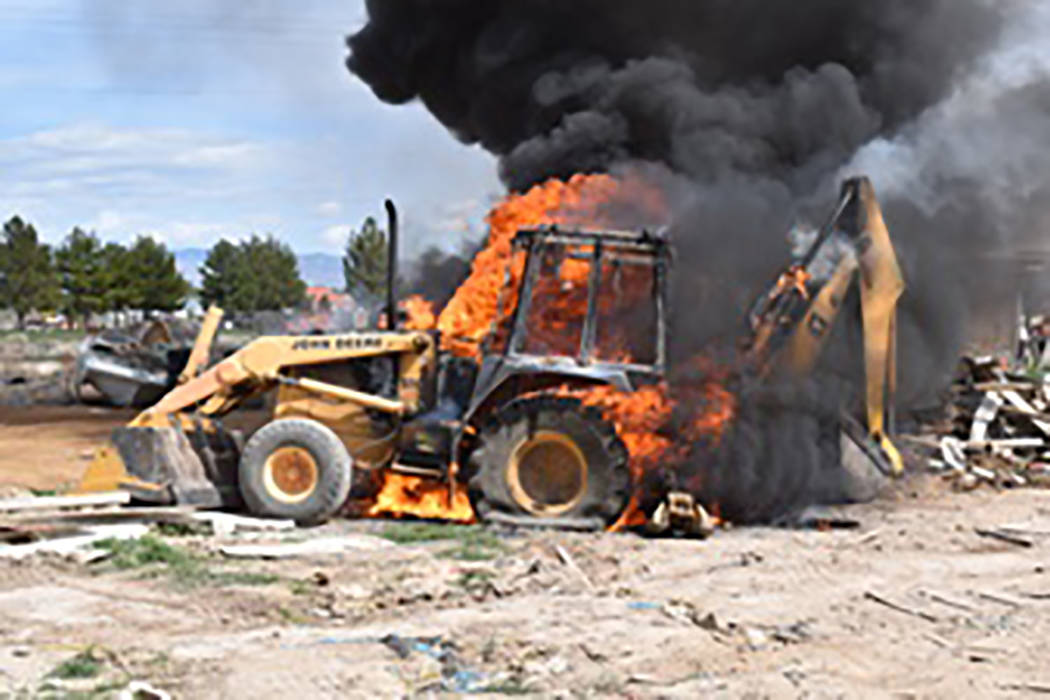 Special to the Pahrump Valley Times No injuries were reported as a result of a backhoe fire as Pahrump fire crews were dispatched to the area of East Heritage Street on Wednesday April 3. Fire Chief Scott Lewis said the cause of the fire appeared to be accidental in nature, possibly related to a mechanical failure of the backhoe’s hydraulic system. 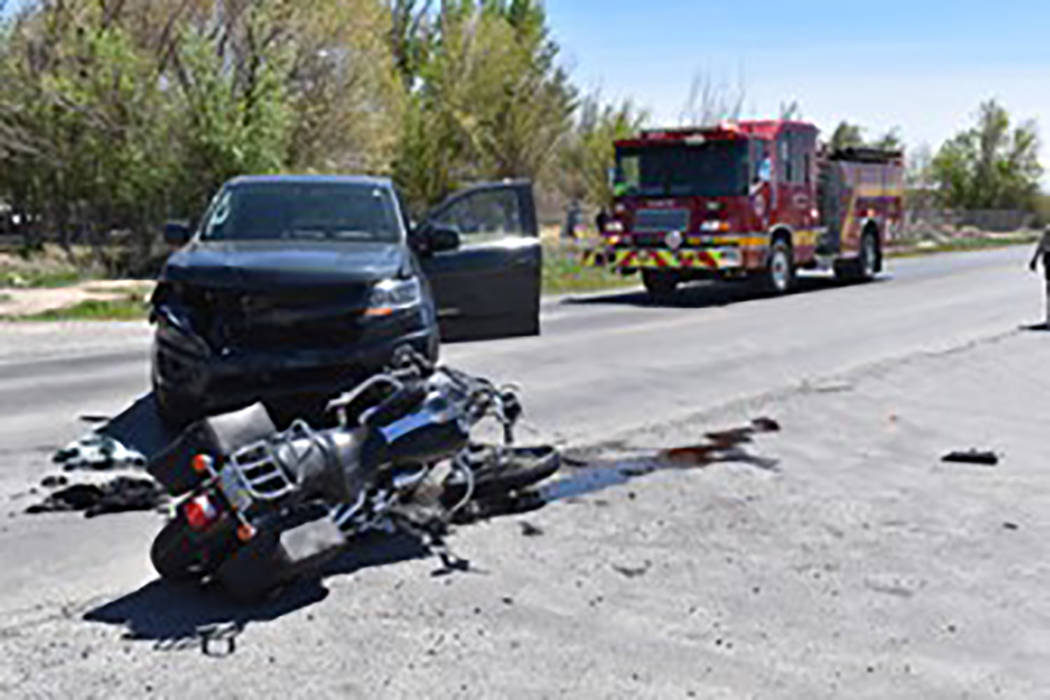 Special to the Pahrump Valley Times A motorcyclist was transported to UMC Trauma in Las Vegas following a collision at the intersection of North Leslie Street and Gally Road on Sunday afternoon April 7. a landing zone was established on scene for Mercy Air-24, where Patient care was transferred. The medical condition of the rider was not disclosed.

“We were dispatched for a report of a passenger vehicle fire next to a dwelling,” Lewis said. “Crews arrived at the residence to find moderate smoke showing from the vehicle, which was under repair at the rear of the residence within feet of the dwelling. Crews commenced a quick, aggressive attack and protected the nearby exposure.”

Lewis said the cause of the fire stemmed from an accidental ignition source while the owner was making repairs to the vehicle.

On Wednesday, April 3, at approximately 2:22 p.m., fire crews were dispatched to the area of East Heritage Street for a fire involving a backhoe.

While responding, crews were receiving numerous reports of the fire, and the possibility of it spreading to nearby debris piles and a structure.

“Upon arrival, we found a well-involved backhoe located at the rear of the property in a construction area,” Lewis said. “It appears that individuals were clearing the property and there were several debris piles in the immediate area that the fire had extended to.”

Crews managed to protect the structure, where the fire was quickly controlled with no further extension.

“The debris piles were also extinguished,” Lewis said. “There were no injuries but it is thought that the cause of the fire was accidental in nature, possibly related to a mechanical failure of the backhoe’s hydraulic system.”

On Thursday, April 4, at approximately 2:39 p.m., crews were dispatched for a mutual aid assignment to southern Inyo County, for a semi-truck fire.

“This incident was specifically on Highway 127 across from the Crowbar Cafe and Saloon in Shoshone,” Lewis said. “The semi truck was also carrying a trailer of hazardous materials. Crews arrived to find the cab of that tractor-trailer fully involved, with heat damage sustained to the bulkhead of the trailer.”

Lewis noted that the initial investigation revealed a non-specified liquid hazardous material aboard the semi.

“Crews protected the trailer, so the fire did not extend to it,” Lewis said. “They extinguished the tractor, which was completely destroyed by the fire. There were no injuries reported and the cargo was safe. It was later transported by another vehicle to its final destination. The material was not nitrous oxide.”

Lewis went on to say that the Southern Inyo Sheriff’s Office halted traffic in all directions coming into the town of Shoshone.

“The initial report was that the town was being evacuated and we found that in fact it was,” Lewis said. “We simply came in and assisted the Southern Inyo County Fire Protection District with suppression and making sure the fire did not extend. There was no leak of product out of the trailer but there was some motor oil that leaked out of the tractor.”

Jolene Young and her husband were actually traveling into Pahrump when they saw heavy smoke billowing from the cab of the vehicle.

After the couple parked their car near a convenience store, they learned that the town was under a mandatory evacuation.

“The Inyo County officials really weren’t saying very much about the situation,” Young said. “We live in Death Valley, and we were trying to go to Pahrump, but we didn’t want to have to go all the way back to the junction, so we figured we would just wait it out. They ended up coming over to our vehicle and told us that everybody had to leave.

“They also stopped all of the traffic. The fire was big and moving really fast and melting the doors. At first, it seemed like everybody was kind of calm, then some people seemed like they were panicking and running around because they thought the tanker was going to go up too. I’m glad nobody got hurt.”

On Sunday afternoon, April 7, Pahrump fire crews were dispatched for a report of a motor vehicle accident at North Leslie Street and Gally Road, involving a motorcyclist.

“Crews arrived to find a two-vehicle, near head-on collision between a full-size pickup and a motorcycle,” Lewis said. “The motorcyclist sustained significant injuries that was consistent with flight. Mercy Air-24 was added to the assignment, where a landing zone was established on scene. Patient care was transferred, and that patient was subsequently flown to UMC Trauma in Las Vegas.”