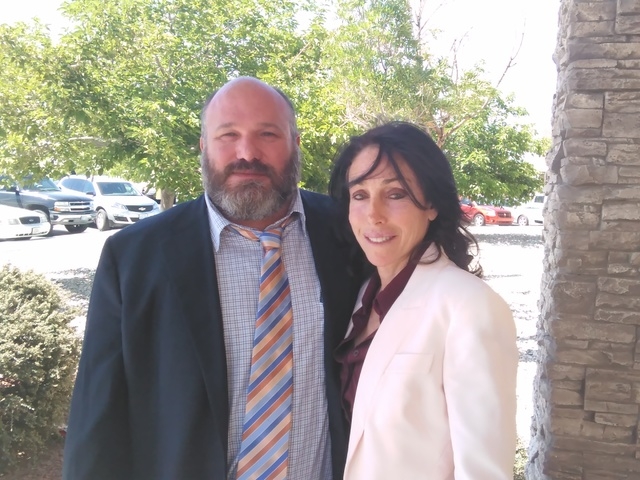 In August of 2013, Fleiss was charged after Nye County Sheriff’s deputies with an arrest warrant in hand, discovered close to 4oo marijuana plants at her home while searching for a wanted person.

Wanker told the court the deputy who found the plants did not follow proper law enforcement procedures, as arrest warrants differ from search warrants.

“It was a bad arrest to begin with and I want to give praise to Judge Wanker,” he said. “I give praise to judges whether I win or lose a case, as long as I get a fair shake.”

The deputy was searching for an individual who had a felony arrest warrant out of Utah.

The person’s last known whereabouts was Fleiss’ home on the far north end of town.

The fact that the deputy did not have a search warrant, did not justify Fleiss’ arrest, even though Wanker said Fleiss did break the law by possessing the plants.

“The judge is very thorough,” she said. “I have a lot of experience in the courtroom and she was very thorough. It is so nice to be in front of a judge who does her homework.”

Additionally, Fleiss said she is taking the proper steps to get her back life together after the entire ordeal.

“I’m trying so hard to clean up my life and get all of this craziness behind me,” she said. “I have such a wreckage in my past and it’s a real process to clean it up. This is just one step closer to getting eventually all cleaned up.”

Fleiss also said she will continue to live in the Pahrump Valley as she wants to eventually establish a bird sanctuary in the community.

“I love Pahrump and I want to build a multimillion-dollar bird foundation here,” she said. “Even though it’s not quite their natural climate, they get acclimated.”

Prior to the hearing, Earnest said he wasn’t certain how the judge would rule.

“I had no idea how things would go because it could have gone either way,” he said. “I thought we had the right side of it. Judge Wanker is very closed lipped, therefore you don’t get any signs about how she will rule on any given case.”

Earnest also gave credit to a colleague who assisted in the case.

“I want to say that Chris Arabia is my co-counsel and he’s brilliant,” he said. “We both worked on this together and spend a lot of late nights bouncing things back and forth. Even though he wasn’t here, he was here in spirit and I want to make sure that he gets credit for it too.”

According to the sheriff’s office, on Aug. 7, 2013, a deputy arrived at Fleiss’ residence and knocked on the open front door to the main house.

When no one answered, the deputy walked to the backyard, where he found some of the plants growing in pots.

After Fleiss gave permission for a search, he and other officers found more plants inside the home, police said.

Police said Fleiss told them she was growing marijuana to supply a cooperative in Las Vegas, but she could not produce the necessary documentation to support that claim.

A search of the rest of the property led to the discovery of 234 plants growing in the separate residence and 158 growing in the backyard, for a total of 392 plants in all.