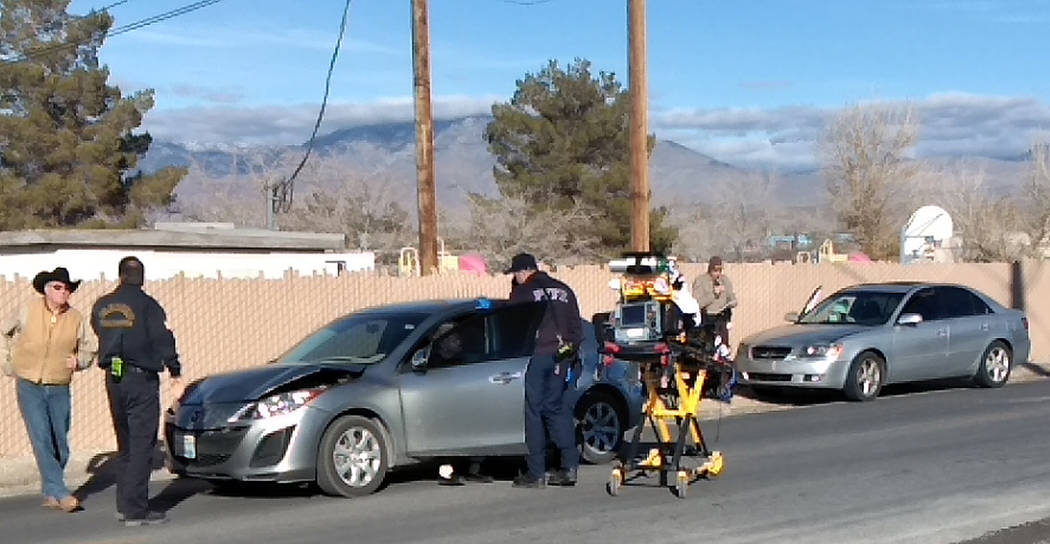 Selwyn Harris/Pahrump Valley Times One person was transported to Desert View Hospital following a three vehicle collision along Wilson Road between Center and West Street On Monday afternoon Jan. 7. The crash occurred in front of the Pahrump Community Church. Wilson Road was shut down in both directions as emergency crews worked to clear the scene.

Selwyn Harris/Pahrump Valley Times No injuries were reported following a two vehicle crash at westbound Basin Avenue and Highway 160 just before 1:30 p.m. on Monday Jan. 7. Officials from Nevada Highway Patrol is investigating the exact cause of the crash.

Area first responders battled a series of structure fires during the first few days of the new year.

“Crews arrived upon location and found heavy smoke showing from within the residence,” Lewis said. “They completed a scene size-up and risk assessment and found that the occupants were all accounted for and removed from the dwelling. Crews commenced an interior attack and offensive strategy where they found a room and contents fire that was spreading between two walls, separating a bedroom and a bathroom.”

Lewis went on to say the crews quickly controlled the fire without further extension, where they ventilated the residence and cleared the scene within an hour and a half, without further incident.

“The cause of the fire is under investigation, but it is thought to be electrical in origin,” he noted.

Later, on New Year’s Day, crews responded to a report of an unknown structure fire, just before 8:30 p.m., on the 700 block of West Tomahawk Street.

“Upon arrival, crews found a mostly extinguished fire within the garage of the residence,” Lewis said. “The investigation revealed that apparently hot embers were placed into a trash receptacle which extended to the walls and nearby cabinets within the garage. Crews checked for further extension and found none. There were no injuries.”

On Friday evening, Jan. 4, fire crews were summoned to the 1700 block of Scales Way for yet another structure fire just before 8:30 p.m.

“Upon arrival, we found a chimney fire which had extended to the wood-framed structure,” Lewis said. “Crews commenced an exterior attack extending to the roof. They remove the framing around the smoke pipe and quickly extinguished the fire with no further incident. The fire was deemed accidental in nature and most likely due to the failure of the smoke pipe and the apparent overheating of it extending to the framed structure. No injuries were reported.”