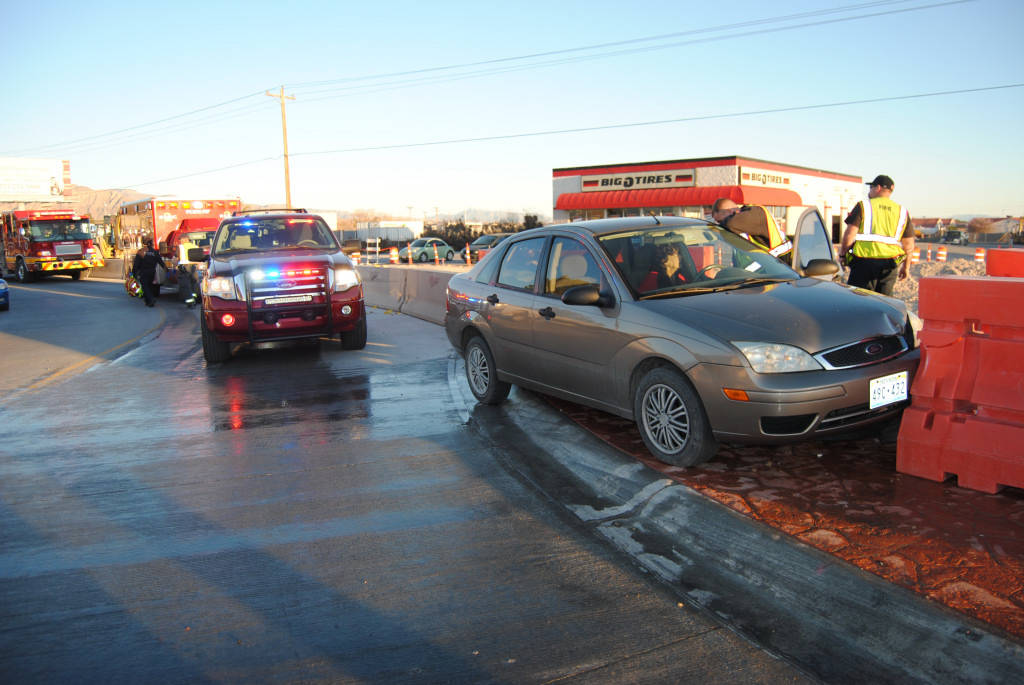 An motorist failed to negotiate the incomplete roundabout project along Pahrump Valley Boulevard and Highway 372 on Tuesday, Feb. 28. No other vehicles were involved in the crash however, the motorist was transported to Desert View Hospital with undisclosed injuries. Special to Pahrump Valley Times

On Tuesday, Feb. 28, an elderly motorist was the valley’s first driver who failed to properly negotiate the roundabout still under construction at the intersection of Highway 372 and Pahrump Valley Boulevard.

Fire crews were summoned to the location just after 5 p.m. last week.

“We were dispatched for a report of an injury motor vehicle accident at Highway 372 and Pahrump Valley Boulevard, which is the construction area for the new roundabout project,” Lewis said. “Upon arrival, we found a single-vehicle accident where the vehicle went through a barrier. There was one person that was injured in the accident and they were transported to the local hospital.”

On Thursday, fire crews were summoned to East Comstock and Upland streets for a report of a dumpster fire in the area.

“Upon arrival, we found a well-involved dumpster fire,” Lewis said. “There were no immediate exposures and that fire was quickly contained.”

“We were dispatched for another dumpster fire in the area of 1570 South Homestead Road,” Lewis said. “Upon arrival, we found a well-involved dumpster fire with no immediate exposures. That fire was quickly controlled with no extensions. We don’t believe the dumpster fires were related, however, it appears that people are improperly discarding burning materials in the dumpsters, which is setting the contents on fire.”

Lewis also noted his crews responded to numerous medical issues throughout the weekend, due mainly to weather conditions.

“We did have some medical issues related to the winds,” he said. “We had a lot of breathing-related medical emergencies and cardiac issues as well as fall victims. All of those were managed without incident, but Mercy Air was unable to fly due to the weather and high winds. We worked collectively with the hospital and our crews transported a lot of individuals to Las Vegas.”