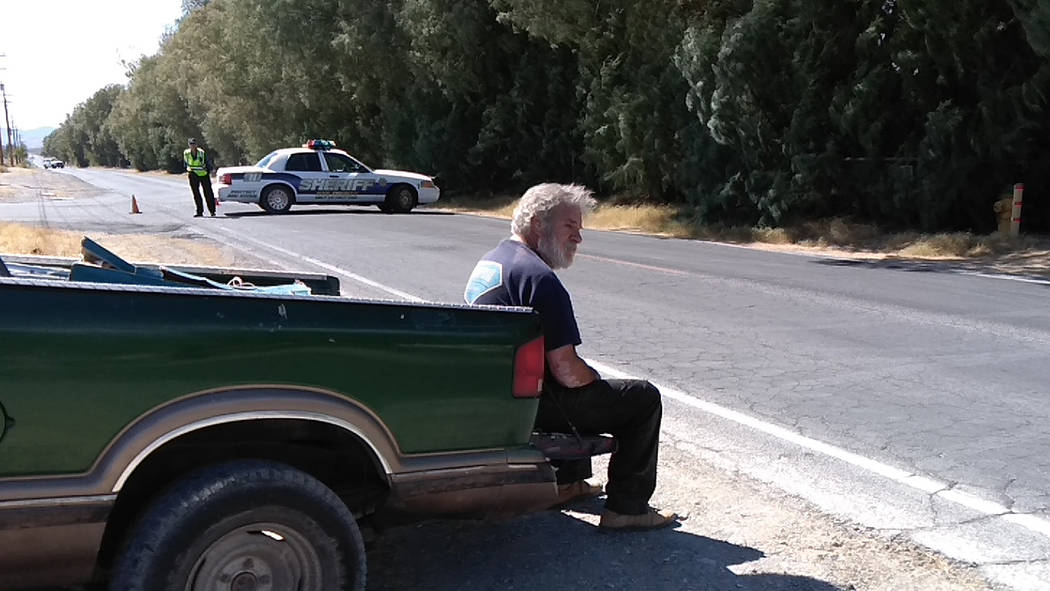 Selwyn Harris/Pahrump Valley Times Pahrump resident Daniel Taylor sits in disbelief as local fire crews work to extinguish a structure fire, which destroyed five residences, including his along the 900 block of Wilson Road on Tuesday August 21. Taylor and his wife Rebecca managed to escape with only the clothes they were wearing before flames consumed their residence. 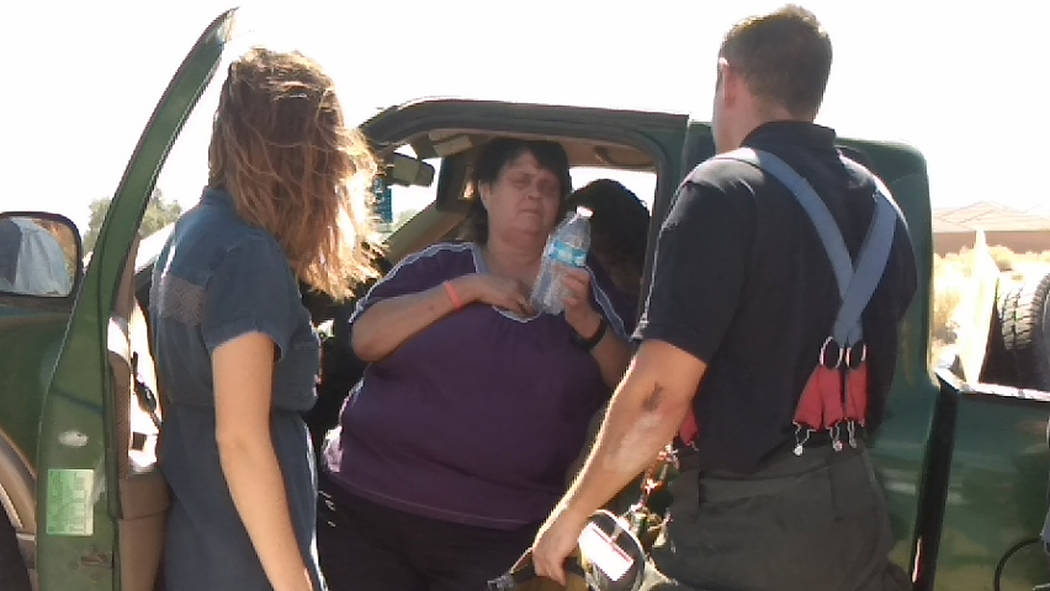 Selwyn Harris/Pahrump Valley Times A Pahrump Valley Fire and Rescue medic assesses resident Diane Walker who received minor injuries as a result of escaping Tuesday's structure fire. Amazingly Walker's home which she shares with her son, escaped the inferno, despite it was just yards away from five other residences which were destroyed by the flames.

Though Pahrump resident Daniel Taylor and his wife Rebecca managed to escape death with just the clothes on their backs, both lamented losing all of their belongings in the aftermath of Tuesday’s structure fire on the 900 block of Wilson Road.

Adding to their respective shock is the fact that the couple’s two pets succumbed to the smoke and flames.

Taylor said he had less than a minute to get out of his motorhome before it was completely consumed by fire.

He credited one of his neighbors with saving his life.

“I was sleeping and my neighbor came running around screaming that there was a fire and told me to get out,” he said as he watched fire crews work to extinguish the raging inferno. “I didn’t know what she was talking about it first because I did not see any smoke or flames. I then put my shoes on and walked out and saw that the trailer next to us was completely engulfed in flames. I just know of one lady who lived there and she was able to get out.”

Regarding the couple’s pets, Taylor was on the verge of tears when describing his failed effort to save the animals, two Yorkshire Terriers.

“We had two five-month-old puppies inside with us,” he said. “When my neighbor told me to get out, I wasn’t thinking and I just ran out the door. By the time I walked to the front of the trailer, I thought about our dogs. I turned around, but everything was engulfed, so I couldn’t do anything for them.”

Adding to the couple’s tragedy is the fact that the Taylors, both four-year residents of Pahrump, are local painters and lost all of their equipment to the flames.

“I have no idea what we are going to do now because we both live on a very limited income of about $500 a month,” he said. “That’s why we lived in a motorhome, now we don’t even have that. The fire did not start in our motorhome. It started in the trailer right behind us. All of our photographs and belongings, everything we had is now gone. We have our pickup truck, but that’s it. My painting equipment was behind the trailer, and that’s gone too. Essentially, our livelihoods have been taken away by all this. We are grateful to be alive, but this whole thing was just terrible. I don’t know where we are going to stay right now. I have no idea.”

Walker said she too, was alerted to the fire by a neighbor, while her son was not home at the time.

“I heard a loud noise and my air conditioning turned off,” Walker said. “I opened the door and some lady who had hair dye in her hair was screaming for me to get out. I started to run out of the house without my shoes, but then I went back in to get my shoes. By the time I put my shoes on and walked out, it was fully engulfed. I was lucky.”

Fire on the horizon

Son Clayton, meanwhile said he was returning home from a visit when he noticed large plumes of black smoke in the distance.

“I was going down Basin Avenue and saw the smoke,” he said. “By the time I got here, just about everything was in flames. The shed behind my trailer was on fire, and that’s when the fire department arrived and started putting out the fire in the motorhome.”

It should also be noted that amazingly, the Walker home somehow escaped the flames, even though it was just a few yards from the other five structures that burned to the ground.