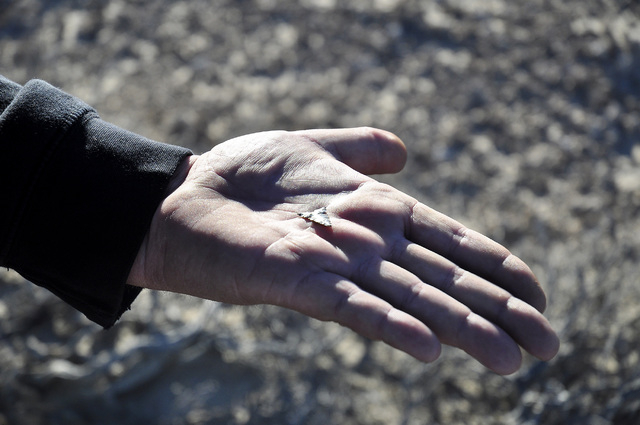 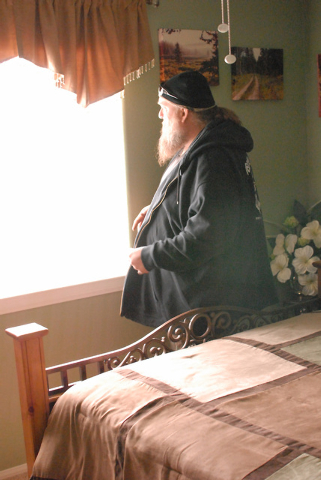 I have to say I have never seen a ghost but in 2012 I wanted to so badly that I ended up on this investigation of this alleged haunted house. As a reporter I had done some ghost stories but what you are about to hear is the real thing. Nothing is embellished. The name of the resident has been changed to protect her house from the curious.

Southern Nevada has a treasure trove of old mining sites and towns. With that comes some legendary ghost stories.

Tonopah has the haunted Mizpah and just down the road is the infamous Goldfield Hotel, and then there is Beatty which has the Happy Burro, and the town of Rhyolite.

Further down the highway to Pahrump there are no ghost towns. The town was ranch land until the agriculture took hold, so the town doesn’t have too many old structures.

Jan has lived in Pahrump since 1988 when she came with her husband from Boulder City. She moved into a small home on the south side of Pahrump in the Cottonwood area. In 2009 her husband, Art, passed away. That same year her younger sister Donna’s husband passed away and she came to live with Jan. The passing of Jan’s husband changed her life and everything in it turned upside down.

Jan said as soon as her husband passed she began having some weird dreams, but at the time she just dismissed them as being part of the grieving process. When her sister Donna moved in 2010, the dreams intensified.

“I went through a period where I had some pretty bad dreams,” Jan said. “I would wake up and see some shadowy figures beside my bed. I woke up one night and saw this huge spider about two-hands wide in the corner of the bedroom.”

Jan said sometimes she could see faces of people, but it wouldn’t be of anyone that she recognized. There was a woman that she remembers. She was mainly a shadow. She could make out some of the features in her face but it was dark.

At the time, Jan really didn’t connect the dreams with the paranormal. To her this was all about getting over the loss of her companion, but all this would soon change.

“It all started happening really fast,” Jan said. “First the dreams and then I would see people beside the bed about once a week.”

The apparitions and the dreams began to intensify.

She said during this time she was often confused and couldn’t tell what was real or a dream. The two worlds seemed to blur together. The dreams were so real. She would be dreaming of her husband and feel his warmth and closeness to her body.

“At the time, I thought I was going crazy,” Jan said. “I thought that they were dreams. I thought I was dreaming about my deceased husband, but then I would wake up and feel someone getting into bed with me.”

Jan would actually feel a body next to her and when she would look, no one would be there. One night she was startled and went into her sister’s room to sleep in her sister’s bed.

“I am not a brave person,” she said. “I woke up in the middle of the night and I was really afraid. I went to my sister’s room and tried to fall asleep, when suddenly something was on me. It felt like a man was on me but no one was there. I called to my sister. I could barely breathe. ”

“I could not see anything on top of her, but she was visibly shaken.”

“I could hear them and it was lots of people talking really low and it was not the radio,” Donna said. “It would be at 3 a.m. and so I knew everything was off. It would wake me up and sounded like a bunch of kids yapping or whispering. It would get me mad. After the third time this happened I was really annoyed and so I told them to shut up and they never did it again. This happened three times.”

Donna knew she was not dreaming because she would often wake up out of a dead sleep and start hearing the voices. They would be both male and female.

She said she never saw any people or shadows like Jan did, but she did have some similar experiences. She would get someone pulling on her covers.

“One time I felt the sheets being pulled off like someone was coming into the bed,” she said. “That got me to say, ‘Are you in or out?’ After I said that, this behavior also stopped.”

Another similar experience was one night she was hugging one of her pillows as she always did and she felt someone pressing down on her pillow.

“Above my head someone was pushing down on my pillow like Jan had a guy on top of her,” she said.

Donna and Jan were not the only family members to see and hear things. Heather, Jan’s daughter, and Brandon, Jan’s son-in-law, would often go and see Jan to use her hot tub or just to say hi.

“I have always got this heaviness that I didn’t want to be there in that house, but I never saw anything and I never heard anything,” Heather said. “Except for one night, we were all out in the garage and we heard something like an old phonograph. Someone was singing. It was just for a split-second and we all heard it at the same time. I never heard anything like it.”

Brandon said he started seeing things in his mother-in-laws house after his father-in-law passed away in 2009. He said he saw little things at first and mostly shadows.

“I saw these shadow figures in the bathroom, the hallway, and in my mother-in-law’s bedroom,” he said. “I saw them mostly at night and my wife was with me, but she never saw anything. The faces were often blurred, but one time I saw a man in an old long coat like something out of an old western movie. Sometimes I would hear voices too, but it was so mumbled that I could not tell if it was in English or even understand any of it.”

Finally Jan finally realized she needed some help when she saw an orb-like object spinning above her head.

“That particular night a spinning noise is what woke me up from a sound sleep,” Jan said. “It sounded like a remote control helicopter and when I sat up in bed I saw the orb. It was bright orange.”

That traumatic experience coupled with some ghost being on top of her persuaded Jan to call a paranormal investigator. She called Barrie Berry from Vegas Valley Paranormal. Berry is considered an expert in the field of the paranormal, and founder of Vegas Valley Paranormal, who has investigated all the paranormal hot spots in Southern Nevada. He was on the “Ghost Adventures” episode of the Mizpah Hotel in 2011.

The first time Berry came out by himself and he made some voice recordings called “electronic voice phenomena.” Jan said he then shared them with her family. Some were garbled but there were many clear ones, she said. Berry told Jan that as soon as he went into her bedroom he felt like he was assaulted.

During the investigation, Berry picked up 12 electronic voice recordings. One was picked up by five recorders and said in a low voice, “Get out!”

At the end Berry told Jan that she had a perfect storm of paranormal activity going on in her bedroom. He also told her that since she was trying so hard to make a connection with her husband that she inadvertently invited the spirits in.

He also said Donna and her sadness just intensified the spirit energy.

On Berry’s third visit he brought a demonologist from Las Vegas, James Davis. Davis performed a Catholic exorcism to clean the house. After that, the house was quiet and Jan has not experienced any other occurrences in the house.

Two years later the Pahrump Valley Times asked Berry to reflect on what he learned about the house.

“After doing the case and researching further, I am learning more about the land,” Berry said. “It was not just a few Native Americans that roamed out here. It was hundreds and hundreds of them. Every day when I go out I see artifacts on the ground.”

Berry said he encounters tools and many arrowheads on the land around Jan’s house. He said he is finding the tools that families used to use over 1,100 years ago.

“That’s hundreds of years of native spiritualism going on here,” Berry said. “Then we have the Mormons moving here and others. This location is set directly near the spring. So we are on the hot spot of many other families before us. You are going to have everything from the Spaniards, the Mormons, the natives and everything that crossed paths here is going to be compounded into this land.”

Berry moved into a house not too far from Jan and said that he even had things going on at his house.

“It is just the land,” he said. “That’s something that people don’t realize. It’s not usually the house that is haunted. It’s usually the land.”

He explained that Jan didn’t have to do much for the spirits were already there. According to Berry, Jan’s emotional turmoil like the death in her family brought forth the spirits and all that negative energy was used by the spirits. Her emotions magnified it. The calmer she got, the calmer the activity in the house was. The exorcism probably helped to calm her down.

“A lot of people think that the house has to be exorcised and have all these teams come out, but all you really have to do is research it,” he said. “Find out where you live and what is around you. Ask why these things are happening in the house. Why would you be hearing voices and noises?”