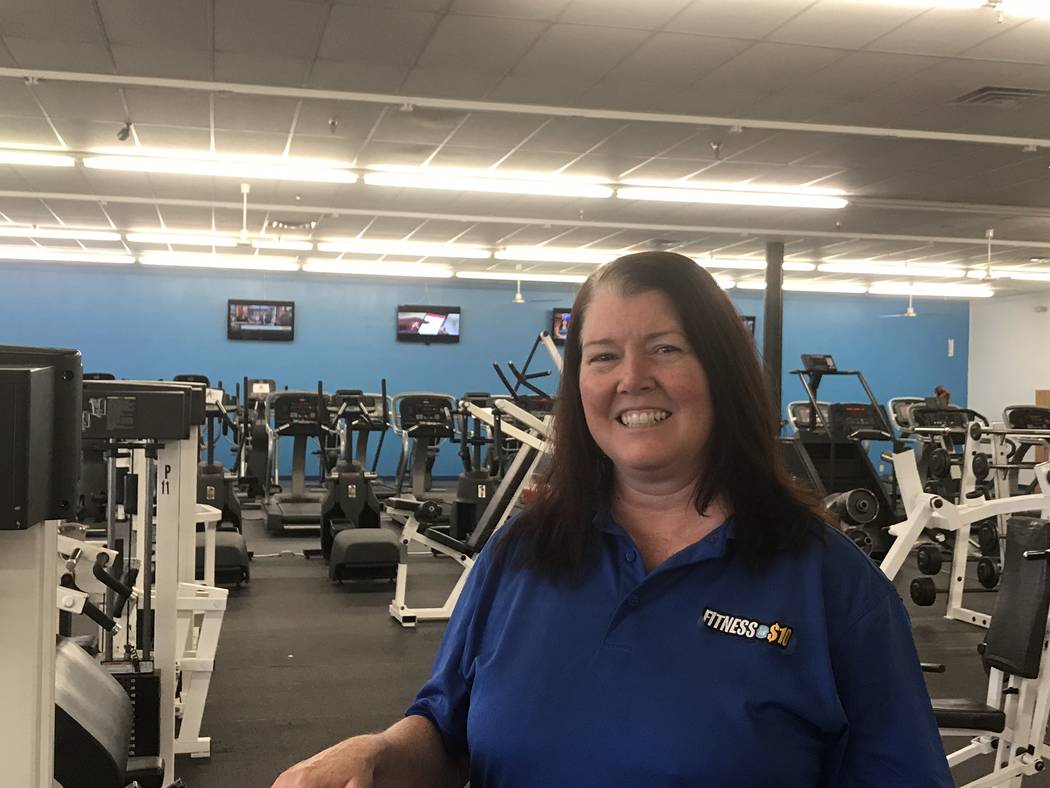 Jeffrey Meehan/Pahrump Valley Times Lisa Duncan, general manager of Fitness for $10 in Pahrump, stands at the club's location at 2271 E. Commercial Drive. Duncan said the health club offers its members incentives such as a "Biggest Loser" type competition that can lead to monetary prizes. 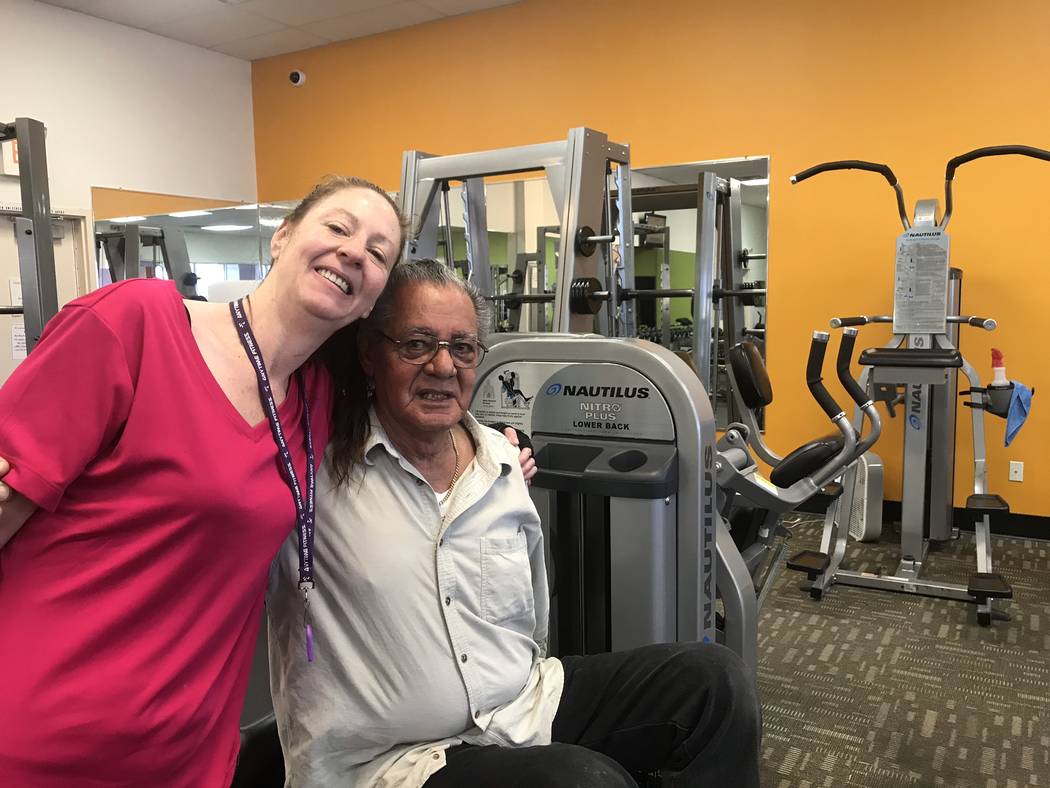 Jeffrey Meehan/Pahrump Valley Times Anytime Fitness health club members Bridget Farrelly (left) and Carlos Soto (right) stand at the club's Pahrump location at 70 S. Highway 160 on Jan. 31, 2018. The number of members coming to the facility increased between 40 to 50 percent in the early part of the year, according to management. 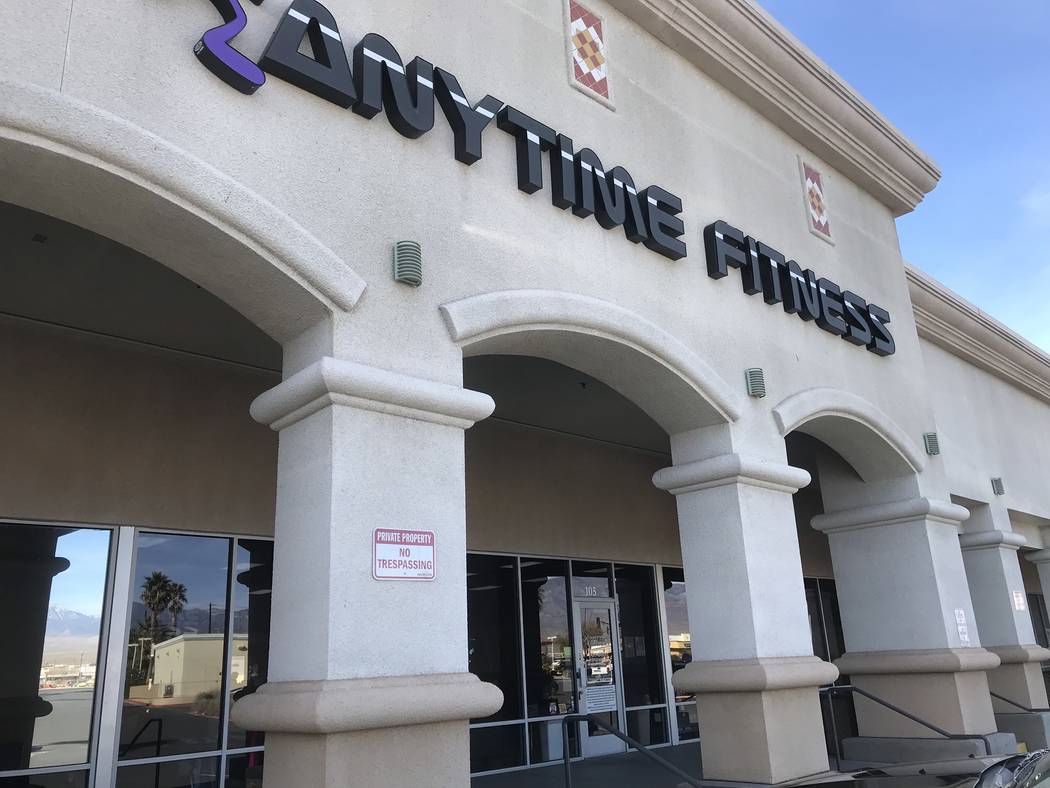 Jeffrey Meehan/Pahrump Valley Times Management at Anytime Fitness' Pahrump location at 70 S. Highway 160 said the health club sees an increase in traffic in December and January, as the new year takes hold. Many of the new faces start to disappear as the year progresses, however.

The new year can bring wishes of being healthy and getting in shape, in some way or another, for a large portion of people in the West and across the United States.

At the same time, some local health clubs have seen a boost in sales and club activity as the new year begins.

Amy Bell, manager at Anytime Fitness in Pahrump, said an annual bump in interest in coming to the gym starts in December and continues through January. Many new people had signed up during that period, she said.

The trend of individuals looking to get healthy or exercise more around the start of the new year seems to be a national trend.

According to a national poll by Marist College, the Marist Poll, people looking to eat healthier, exercise more and lose weight fell into the top five New Year’s resolutions for 2018 and in the previous years as well.

Of the more than 1,000 individuals surveyed in November 2017, losing weight tied for the No. 1 position with being a better person in 2018 for resolutions in the coming year. Both categories were chosen by 12 percent of respondents.

Two categories, exercising more and eating heathier, tied for the No. 2 spot with 9 percent of the respondents agreeing. Getting a better job also tied in the No. 2 position with 9 percent, according to the poll.

A similar situation happened for those making resolutions for 2017, though the being a better person category took first place for the previous year’s resolutions.

According to the Marist Poll, 68 percent of people said they kept their resolution in full or part for adults who made resolutions in 2017.

Other reported statistics put the number of people that actually follow their resolutions much lower, at 8 percent.

Incentives exist in town for those looking for a reason to get healthy and exercise.

Lisa Duncan, general manager at Fitness for $10 in Pahrump at 2271 E. Commercial Drive, tries to keep people on track with their resolutions, giving people a good reason to keep them.

“As they start to lose their inspiration to keep their New Year’s resolutions, I’ll give them a new inspiration,” she said.

The club puts on an annual “Biggest Loser” type competition, which runs from March 1 to May 1. The competition carries a monetary incentive with it. Prize pools are based on the number of people that participate.

A $20 entry fee includes weigh-ins and body fat measurements by personal trainers. That fee also incentivizes those in a basic membership, which doesn’t allow for class offerings, to attend some of the club’s instructional offerings at no charge.

The number of people that stick with the contest has increased over the past several years.

“The first couple of years I did it, most people dropped out,” Duncan said. “Over the last couple years, more people have stayed in.”

Several categories of cash prizes are available—based on weight loss in one and body fat percentage in another. Male and female participants compete separately.

Fitness for $10 is running a special in February which drops the annual administration fee on the club’s VIP plans.

New members that sign up for these plans, which require a 12-month contract, also get access to classes such as Tai Chi, Yoga, kickboxing and others. Plans start at $10 per month for the basic plan and move up to $29.99 per month in the three available membership tiers. The VIP plans also include universal access to other Fitness for $10 locations.

Those who sign up for the basic plan have access during certain hours, though these members can pay monthly and not be in a contract.

That plan also doesn’t include classes or access to other clubs owned by Fitness for $10.

Anytime Fitness has plans starting at $29 per month, according to the company website, which includes universal access to other clubs around the country and the world after 30 days of membership.

Bell said she offers some incentives in the summer, such as free tanning, to keep members coming in.

The demographics of those signing up during the early part of the year is a mix, according to Duncan.

Duncan suggests coming in at least three to four times a week for those who have made a resolution,” just to keep the pace,” she said.

Starting off easy is also a suggestion Duncan gives to those just getting going.

“It’s the ones that come,” she said. “They work really hard for three days, and they’re so sore, they just don’t come back.”

Many new members that sign up at the start of the year do tend to fall out of the habit as the year progresses, “… but those who have really stuck to it, and really made it part of their lifestyle, they stay,” Duncan said.