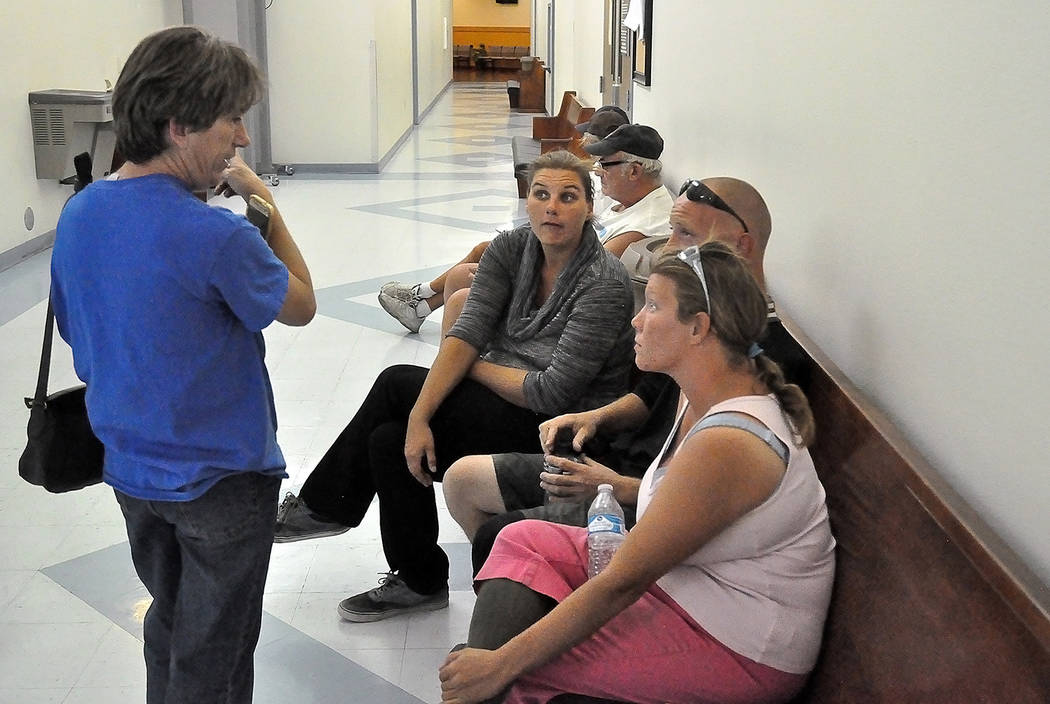 CORRECTION: Donna Vickroy, far left, was among those who were attempting to help the homeless citizens. Vickroy, who is working with Covenant Lighthouse’s You Matter Ministries to help the homeless, was incorrectly identified in a photo caption on Page A5 of the Sept. 19 Pahrump Valley Times. 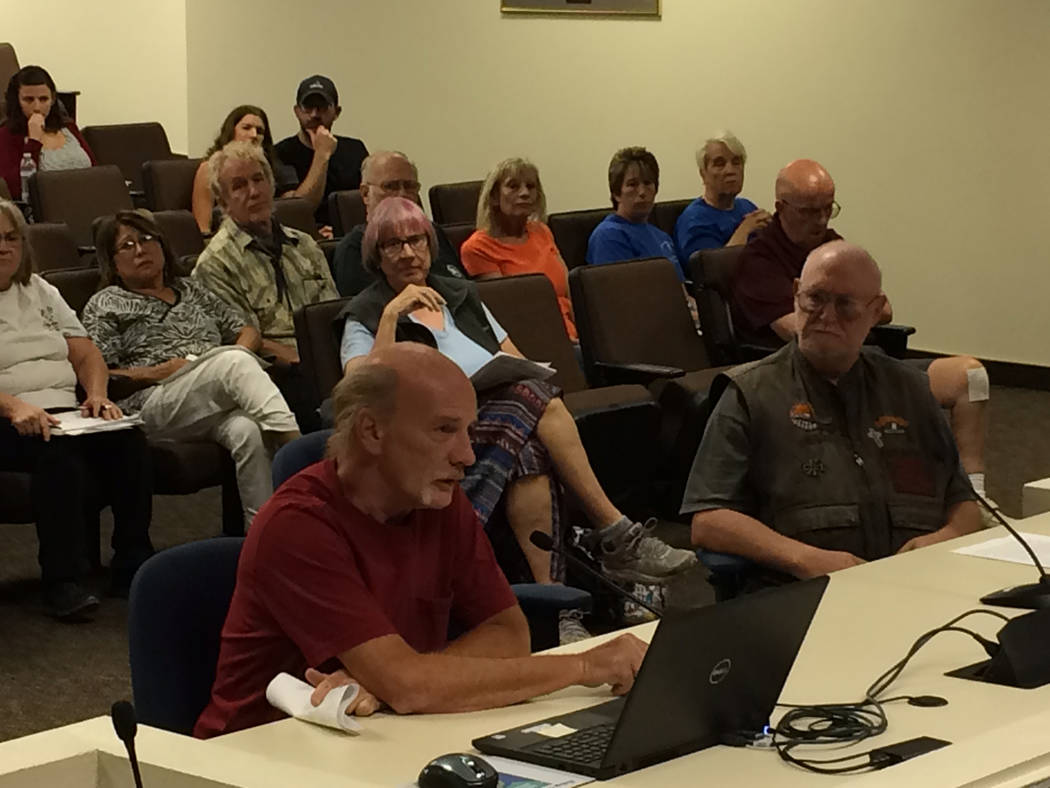 Robin Hebrock/Pahrump Valley Times Anthony Roberts, at left, was one of the many homeless residents who were trespassed from the former homeless camp located off of East Basin Avenue. He went before the Nye County Commission on September 18 to share his personal story with officials and the public. 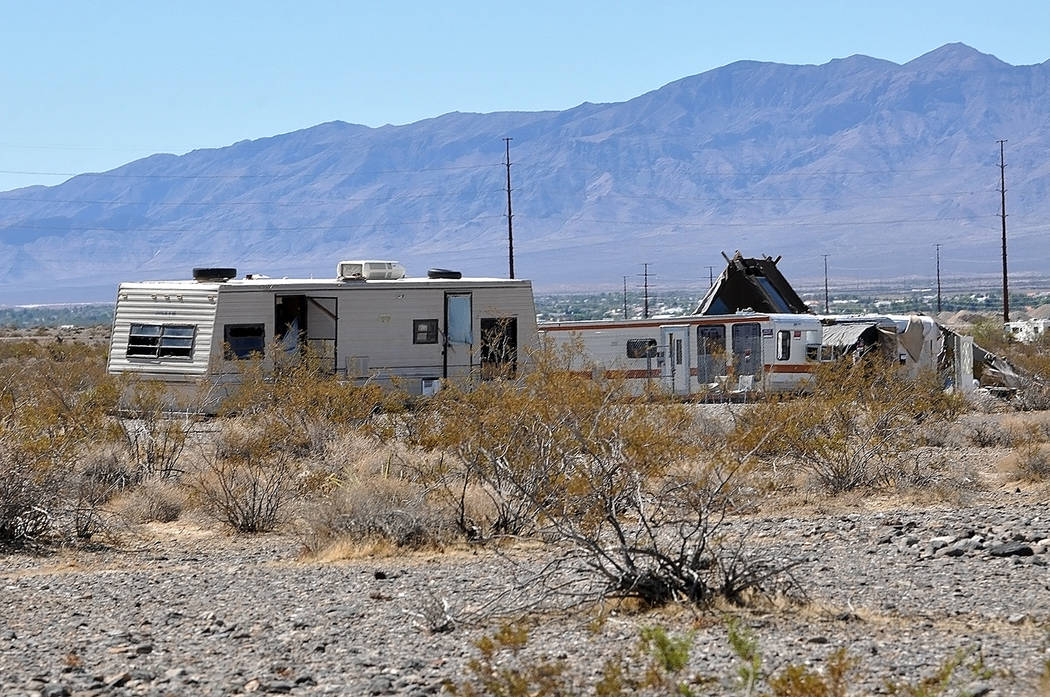 Horace Langford Jr./Pahrump Valley Times A homeless camp on East Basin Road as shown in a photo earlier this month. On Wednesday, Sept. 12, all those who had made their makeshift homes on the property were forced to relocate after the owner of the parcel had notices of trespass issued.

There was something of an outcry from several members of the Pahrump public on Tuesday during the latest Nye County Commission meeting, centering on the situation with the valley’s homeless who were recently trespassed from privately owned land east of the Pahrump Nugget.

These residents were notified on Sept. 12 that they were required to vacate the property they had been occupying for years, creating a wave of concern in the valley.

Nancy Brown heads Covenant Lighthouse Church’s You Matter Ministries, which is dedicated to aiding the homeless. She attended the meeting to express her anxiety and beseech the town, county and community to step up and offer a hand to those in need.

“It’s time the town of Pahrump and Nye County become proactive in helping our homeless people,” Brown asserted, noting that she herself has been working with the local homeless roughly four or five years. “In researching a lot of information on the homeless, I have found that it is 68 percent cheaper to provide a homeless person with their own house, like a tiny house, which would cost about $10,000 per year and would also afford them mental health services and other services that they need.

“Because when one of our homeless people gets sick, they need to go to the emergency room because they don’t have doctors, they don’t have insurance. And it’s costing us as taxpayers a lot of money that doesn’t need to be spent. It’s time that we become proactive and fiscally responsible with our tax dollars in helping our homeless.”

Brown said she felt there were three main factors to take into account when considering the homeless who were trespassed.

First, there is no local homeless shelter, so Brown questioned where those affected were supposed to go. Las Vegas was not a good option, she continued, as the shelters there are already overcrowded. Finally, she emphasized that many of the residents living in the former homeless camp were not there by choice but were there because they had no other choice. Brown ended her comment with a Bible quote, stating, “What we do unto the least, we do unto Jesus.”

Right on Brown’s heels was Donna Vickroy, another who is working with Covenant Lighthouse’s You Matter Ministries to help the homeless. “Over the last couple of days that we have been helping them and visiting with them, they have just been in tears, thanking us for all the help that we have been giving them and the continuing help that I am going to give,” Vickroy informed the commission and audience.

The public comments kept coming with Diane Southworth, who stated that she is part of the NyE Communities Coalition Community Outreach Committee, which meets monthly to discuss a huge array of topics of importance to the community. While the group does much good for Pahrump, Southworth encouraged everyone to get involved. “We all need to dig in there and remember, it’s not a handout, it’s help up and that makes a difference.”

One of the most personal stories of the morning came from Anthony Roberts, a homeless resident who had been living on the land east of the Pahrump Nugget. He explained that he had come to Pahrump after Hurricane Harvey in Texas had wiped out his life there. Searching for a new place to live, Roberts decided to settle in the valley because of all of the freedoms that had been extolled.

“I had seen videos, freedom in Pahrump, the only place in America where true freedom still existed, you get treated with respect and honor,” Roberts, an Army veteran who is now disabled, said. Roberts had been living on the property east of the Pahrump Nugget since May, he stated, and had encountered no problems at all until September 12. “That sheriff came up there, gave me 15 minutes to get out,” Roberts said, noting that with the rush, he had left some of his possessions behind. “That was the first time that I was disrespected in this county and I just couldn’t believe it.”

“As you know, we, as the Nye County Sheriff’s Office, protect the rights of people and uphold the law. In that particular case, the law was the trespass order, which we upheld.” Wehrly said her deputies may have notified people they had 15 minutes to pack up but stressed that they also explained to everyone that it was their first notice. The deputies said they would return, which they did many hours later, giving those affected about 12 hours to complete their move. “We are not uncaring, we just believe that everyone should abide by the law,” Wehrly concluded.

“I feel bad for the homeless too. I actually worked for a ministry for several years in the 80s where we took them home and they lived with us. So I would encourage anybody who had property and room in their houses that want to help these folks, please invite them in and help them that way,” Schinhofen said, remarking that he believes efforts to help the homeless should come from fraternal organizations, church groups and private businesses, not the government homeless shelter. “And this gentleman who asked the sheriff to have them moved had every right to, it’s private property,” he said.

Brown is far from the only person eyeing tiny homes as a possible solution to the valley’s homeless problem. The nonprofit Homeless Veterans Solutions has been continually working toward that goal, with its mission to confront homelessness by making safe, durable housing available to all at a price they can afford. The nonprofit places a large focus on homeless veterans and is still striving to bring their vision into reality.

Anyone willing to get involved is encouraged to contact the group at homeresNV@aol.com or 775-419-2610.

In addition to Homeless Veterans Solutions, another tiny home endeavor is taking shape in Pahrump. During the commission meeting, resident Carla Hill gave a presentation regarding her project proposal for the next Community Development Block Grant cycle.

Hill recently moved to Pahrump from San Diego and has a master’s in construction management with extensive experience in a variety of projects, she said.

“Our entire country has a problem with low income, homeless, as housing skyrockets … It makes it difficult for people to find housing, especially those who are at risk to be homeless,” Hill explained. Due to this fact, she wants to start a project called Oasis Starland Village, with tiny homes to provide low-income housing to disabled, elderly, homeless and displaced persons. “If people have their own little home … they can have a sense of pride, ownership,” she said.

Hill can be reached by email at cmprojectm@gmail.com.

The Oasis Starland Village project was just one of many proposed for the grant. The project must now be deemed eligible for the grant by the state, after which the commission will have the final say on whether this will be one of the three projects it will select to move forward within the new grant cycle.