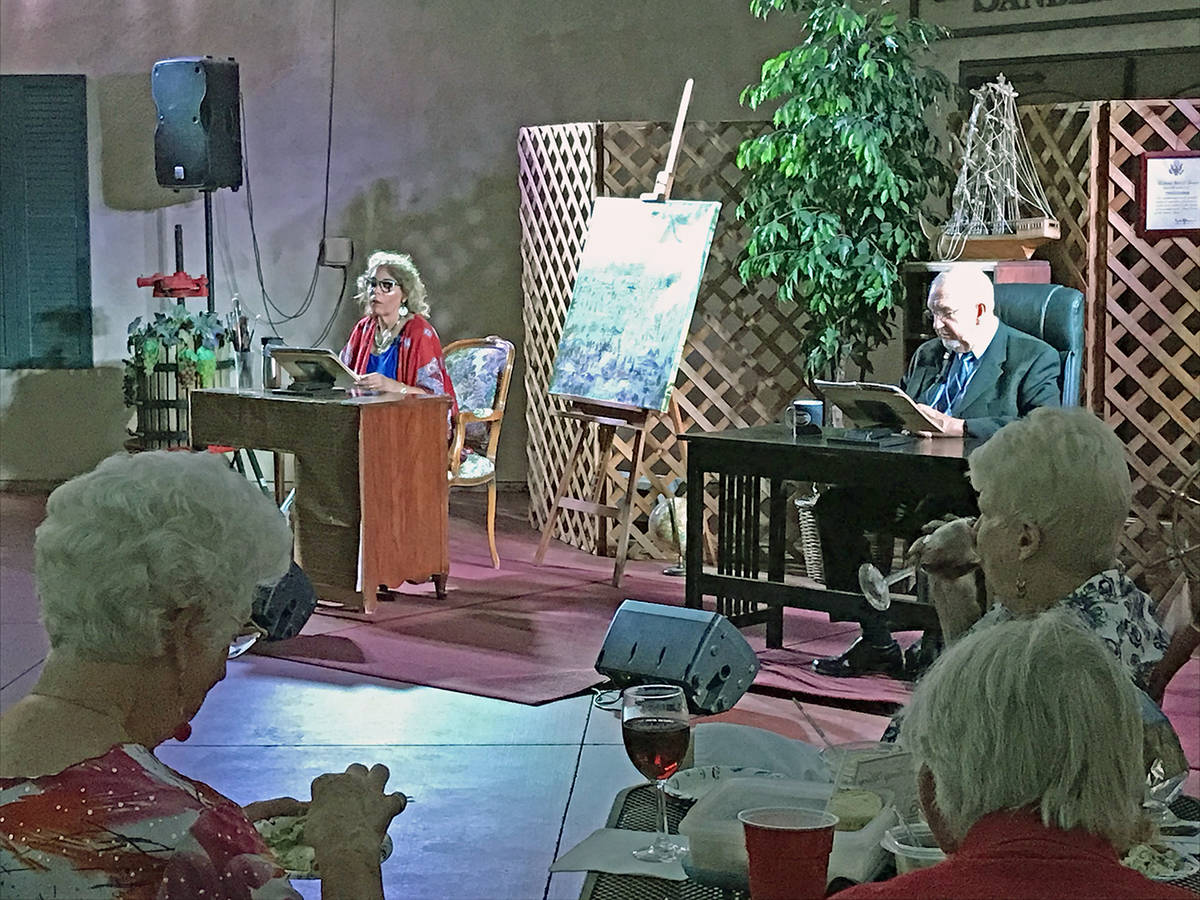 Robin Hebrock/Pahrump Valley Times The Pahrump Valley Lions Club hosted its play fundraiser featuring "Love Letters" on July 16 and 17 at Sanders Family Winery and audiences were obviously delighted with the emotional, compelling tale of a love that stretched across both distance and years. 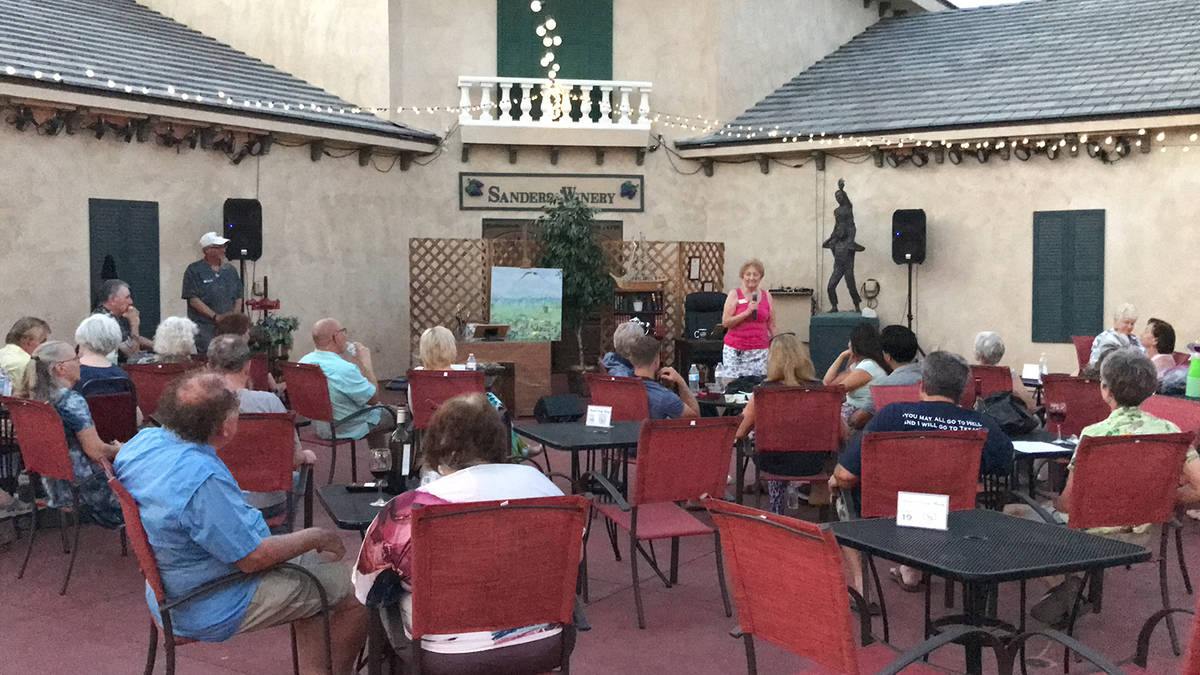 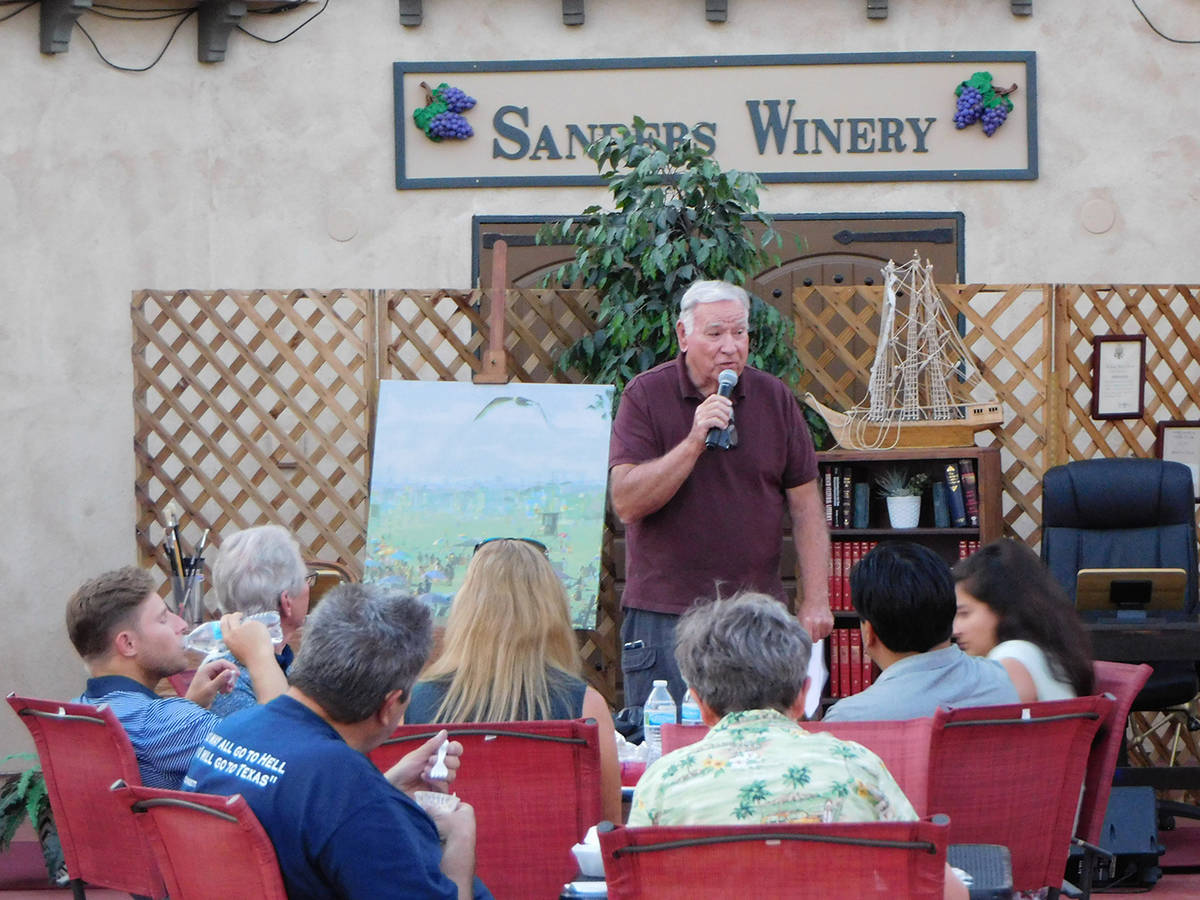 Robin Hebrock/Pahrump Valley Times Jack Sanders of Sanders Family Winery was pleased to offer his winery as the venue for the Lions Club's latest fundraising effort. 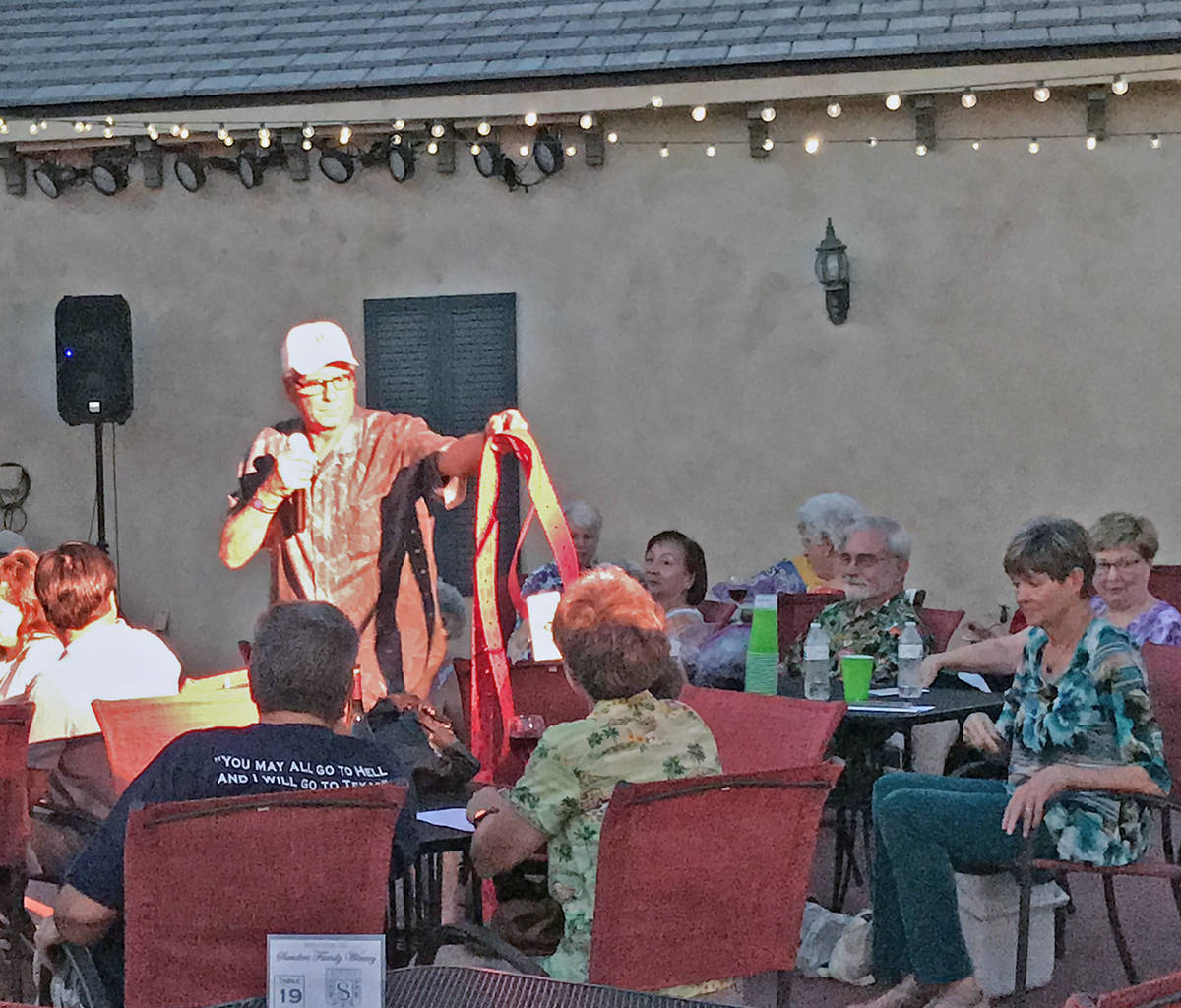 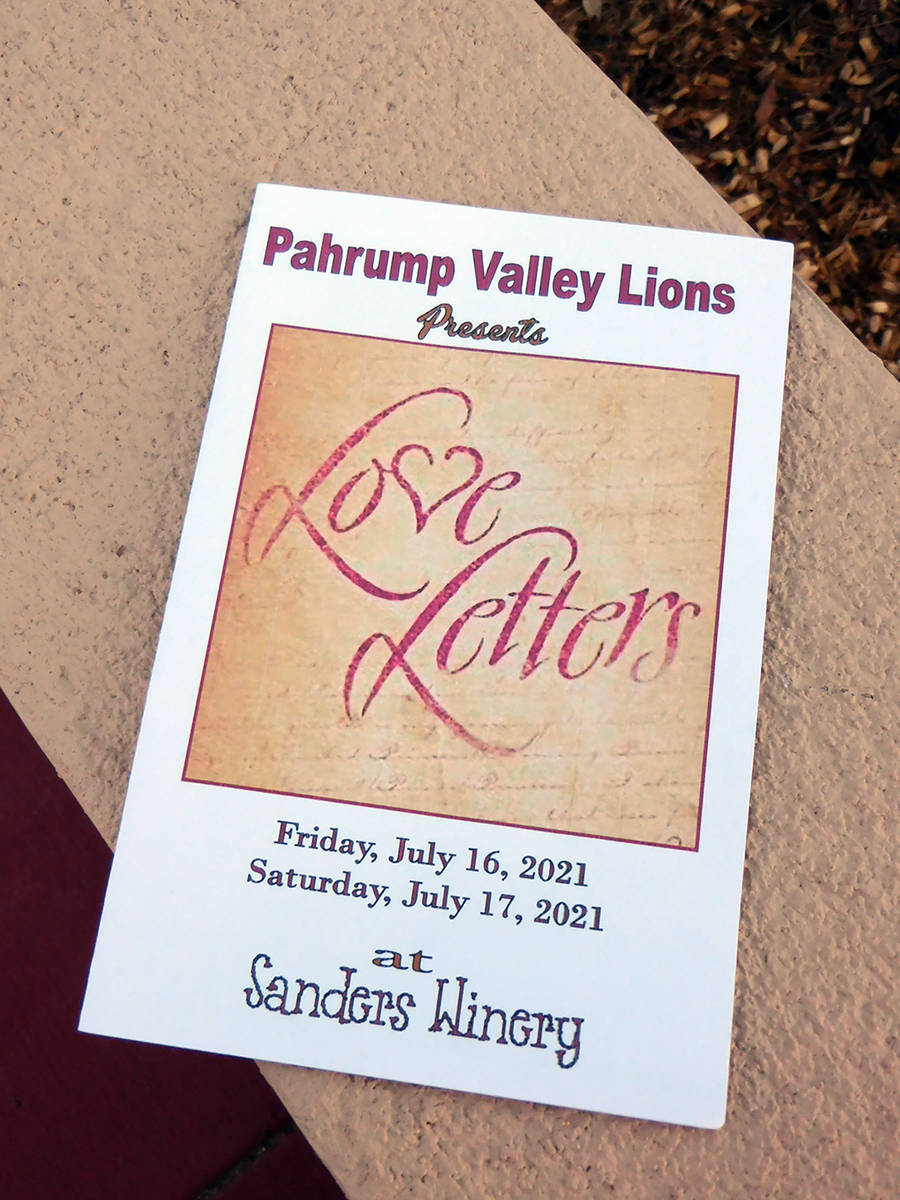 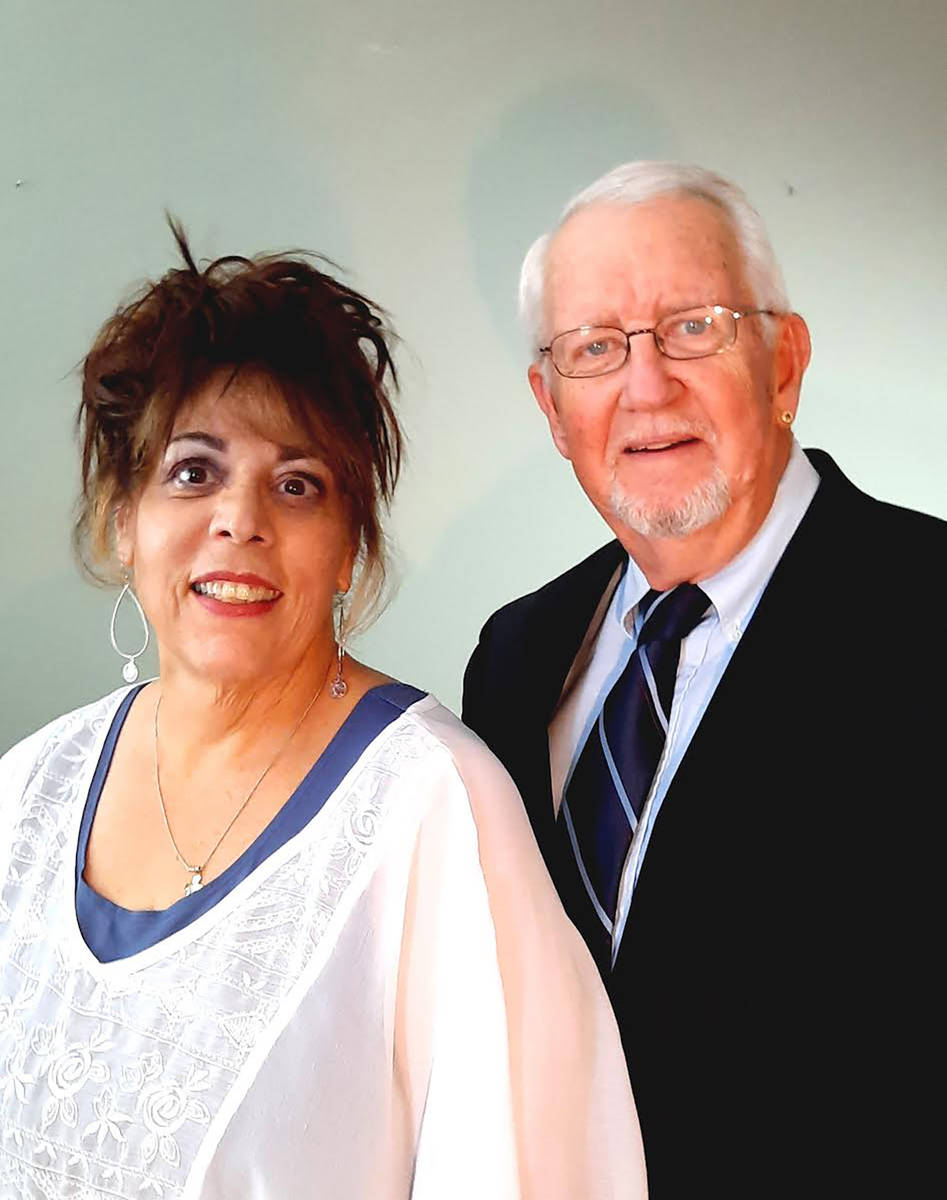 Special to the Pahrump Valley Times Linda DeMeo and Bill Newyear were the stars of "Love Letters" on July 16 and 17.

Taking place on Friday and Saturday, July 16 and 17, “Love Letters” is a two-act play with just two actors taking to the stage, making the production fairly easy to put together.

It is performed on a simple set containing both characters separated by an invisible wall of distance and while the set itself may be simple, the ability to invoke a strong reaction from viewers is not quite as straightforward. The actors, local residents Bill Newyear and Linda DeMeo, had to put their hearts and souls into the play to bring to life the emotions of the two characters they were portraying and the results of their efforts were plain to see in the response from the several dozen attendees who turned out each night.

“The play centers on two characters, Melissa Gardner and Andrew Makepeace Ladd III, who cover a period of 60 years through shared correspondence, from grade school valentines to postcards to letters,” the event program detailed. “Seated side by side at tables, but separated by distance, they read their letters in which they discuss their hopes, dreams, ambitions, disappointments, victories and defeats, all that has passed between them throughout their separate lives. The finality of Melissa and Andrew’s correspondence brings them to the realization that their exchanges were really love letters all along.”

Jack Sanders of Sanders Family Winery welcomed the crowd that came out on Saturday evening with words of gratitude. “We really appreciate your contribution to the Lions Club and all the work they do. One hundred percent, and we are proud to say that, 100% of the proceeds, including the raffle stuff that you are doing, is going to assist the club and the beneficiaries of their work. We thank you for that, very much,” Sanders told the audience.

“Tonight’s show is going to take you emotionally through a whole lot of emotions that you’ve all had, will have and if you haven’t had them, then you’re probably not in very good shape mentally!” Sanders said to the chuckles of attendees. “There will be some times when you will be laughing your butt off, there are other times that you’re going to be intense and listening because there are some lessons to be learned and then there are some times when you should maybe sort of just settle back and do a little internalizing, and stop and think about what’s going on with you today. It’s a very nice play.”

DeMeo, who is not a Lions Club member but who is very supportive of the group’s mission, said she was more than happy to step up and take on the role of Melissa Gardner. She said she was humbled to have been chosen by Newyear for the part and noted, “The character is not me at all, I definitely had to act!”

She said that her hope was that the event was able to raise money to support the Lions Club’s scholarship program, remarking, “I’m all about helping the young people. I also support the youth group in my church too. Our youth are very special.”

Newyear was raving about the outcome of the event, telling the Pahrump Valley Times, “The Pahrump Valley Lions Club’s production of ‘Love Letters’ hit a homer this past weekend. Sanders Family Winery was the perfect setting and Mother Nature dropped the temperature enough so that sitting outside was not uncomfortable.”

He offered his thanks to all those who made the event a big success, including all the Lions Club members who helped out, “Especially Valerie Barton, who sold so many tickets; Brigitte Dubin and the Dubin family who gathered the many excellent raffle prizes and Bruce Schoenberger, who sold raffle tickets with exceptional flair,” Newyear stated. “Special thanks also to Marcia Newyear for her set design. Thank you to Pete’s Meats and Treats for providing meals for those who did not bring their own. Many thanks to Jack Sanders and the entire staff at Sanders Family Winery. They could not have been more cooperative. And a super thank you to Linda DeMeo, who exceeded all expectations in the role of Melissa.”

Newyear also offered his thanks to those who, along with himself and his wife, contributed raffles prizes for the event, including Joyce Campbell, Sue Bai, Sanders Family Winery, the Pour House and Barton.

“I am happy to report that, after expenses, the Lions Club made a profit of $3,100 and sold $850 worth of raffle tickets,” Newyear concluded.

For more information visit the Pahrump Valley Lions Club’s website at https://bit.ly/2WblpNB or the club’s Facebook page. Residents can also reach out by emailing brigitte@brockwaymt.com or dropping into one of the club’s bimonthly meetings, which take place the first and third Tuesday of each month at 6:30 p.m. at the Pour House, 1101 S. Highway 160 in Pahrump.