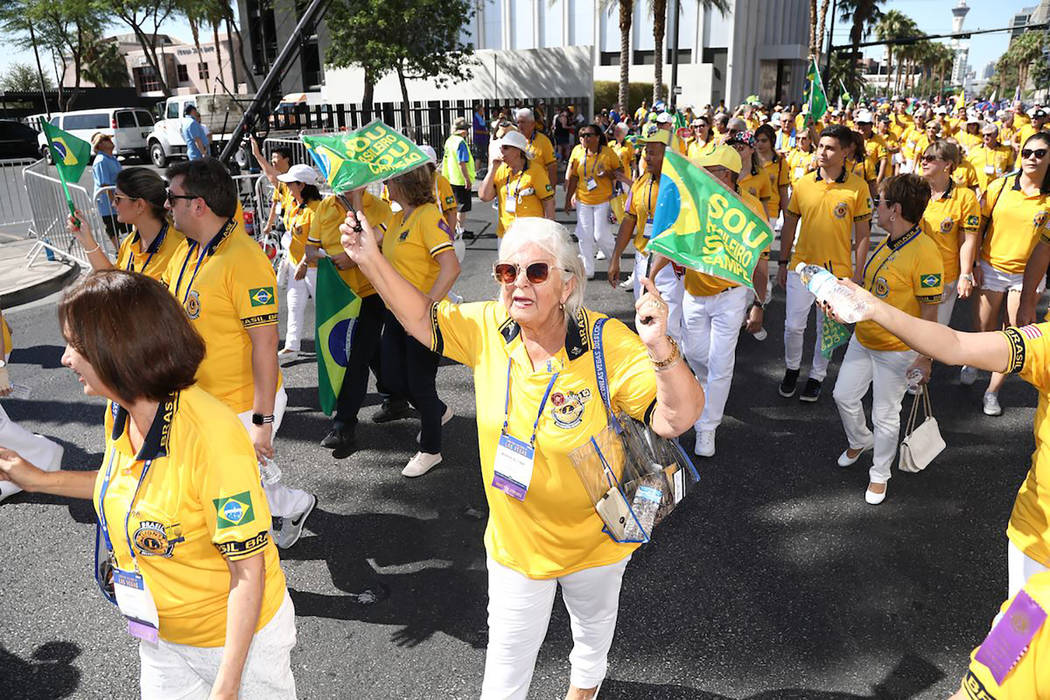 Special to the Pahrump Valley Times This photo, provided by the Lions Club International, shows just some of the thousands of Parade of Nations participants who took to the streets of Las Vegas on June 30. 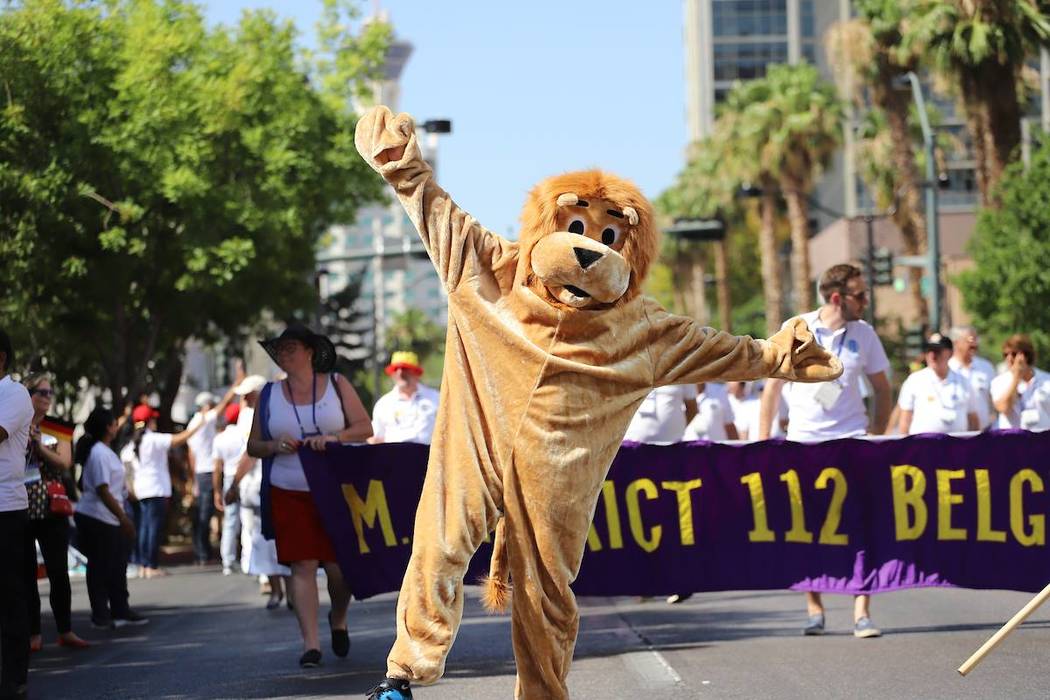 Special to the Pahrump Valley Times The Lions Club mascot is pictured cavorting for the crowds of spectators enjoying the 51st Parade of Nations. 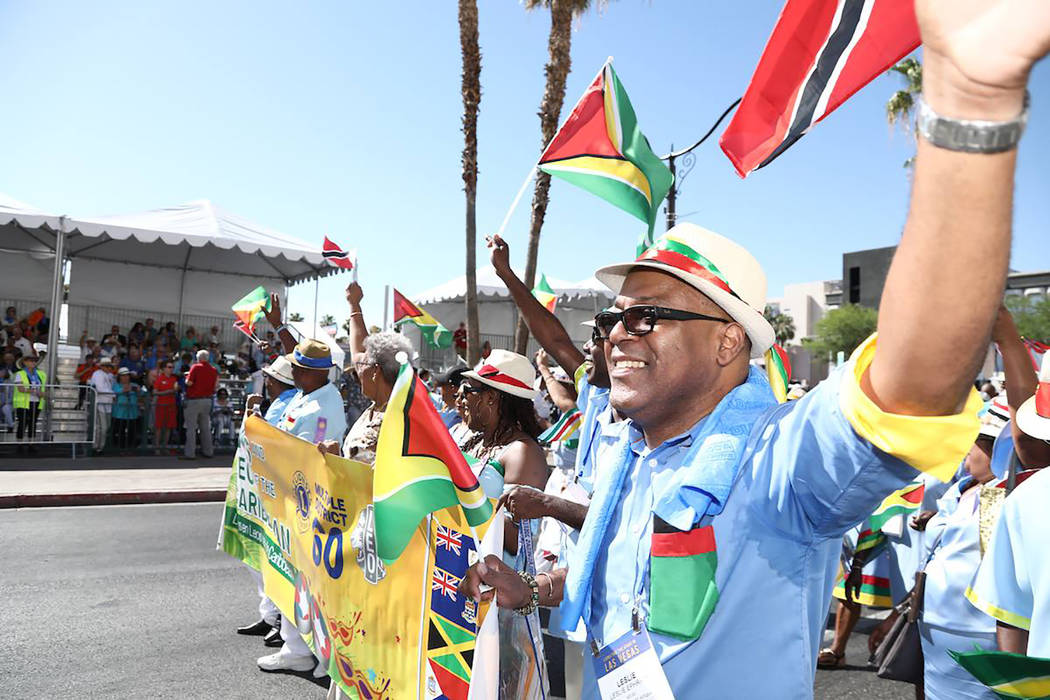 Special to the Pahrump Valley Times Nations from all across the planet came together in a showing of unity during the Lions International Parade of Nations, demonstrating their belief in the need for harmony among all peoples.

The Lions Club International inundated Las Vegas last weekend for its 101st Annual Convention, including its 51st Parade of Nations and Pahrump Valley Lions Club members were a big part of all of the activity.

Pahrump resident and Lion’s Club member Bill Newyear was the head of the parade, a large-scale event symbolizing and encouraging unity and harmony. The parade was comprised of approximately 15,000 participants from 125 different countries, many of whom came garbed in the clothing of their native lands, creating a fabulous display of diversity all enveloped in the concept of togetherness.

“I would have to say it was a rousing success. Naturally any convention, any big undertaking is going to have some glitches, but overall, we got compliments from people all over the world,” Newyear said happily after returning to the valley following the convention. “And the parade, which I was in charge of, set a record for length of time. We were done in two hours and 37 minutes, which was really fast. We did have some problems with heat but all in all, it went really well.”

Newyear detailed that there were delegations from all over the globe at both the convention and the Parade of Nations.

“The international president this past year is from India, so there was a large Indian contingent. And the incoming president, the first female president of the Lions Club International, is from Iceland so Scandinavia had a large presence. Japan always has a lot of people and Nepal, oddly enough, had a very large contingent,” Newyear said, jokingly adding, “I think they might have shut down the entire country in order for everybody to be there!”

Newyear was far from the only person enthusiastic about the turnout and success of the event. Lions members from all represented clubs were obviously thrilled to take part and help spread the word about the world’s largest volunteer organization.

“It is the one time every year when our members gather to celebrate the past year’s victories and to talk about how we can serve our communities back home in the year to come,” she said. “You can imagine a parade like this draws a lot of attention.

“It is a colorful presentation of nations coming together around an important purpose – service. This year we have 125 nations represented with flags, marching bands and many dressed in their native dress. The local community came out and really enjoyed the energy of Lions members. They are a lively group.”

Weber said there were more than 20,000 members in Las Vegas to celebrate, share their experiences and knowledge and learn from other charitably-minded Lions. This year, there was a large focus placed on one specific topic, that of a disease which affects millions of people worldwide.

“A big focal point of this year’s convention was on educating our members on our new signature cause, diabetes,” Weber explained. “Diabetes is one of the fastest growing diseases in the world currently affecting 425 million people of all races, income levels and ages. This was the leading factor for Lions International in choosing their new signature cause because the diverse nature of the disease calls for a global network of volunteers administering diabetes aid.”

Weber said the Lions International Parade of Nations is a show of the strength and pride of the many communities involved, with the most important factor being unity.

“As the world’s largest volunteer organization with 1.5 million members in 200 countries, we do great work,” Weber stated.

“The parade serves as a kick-off to the new year. This year Lions International inducts its first female president, Gudrun Yngvadottir, of Iceland. Yngvadottir plans to further diversify the global service organization by launching New Voices, a program aimed at bringing in more women and young people to Lions clubs, and a fresh perspective on community service.”

In Pahrump, the local Lions Club is always looking to add to its volunteer ranks and those who might be interested are highly encouraged to get involved. Newyear said his membership in the organization has been an amazing experience and one that he thinks many other people would benefit from as well.

“Melvin Jones, the founder of the Lions, is quoted as saying something to the effect of, you can’t really get ahead in life until you stop to help others. We are all on this planet together and it behooves those people who can to help those people who can’t,” Newyear said.

“When my wife Marcia and I moved to a town in California many years ago, we joined up and as they say, the rest is history. I can safely say that Marcia and my closest friends in the world have come through the Lions, we’ve attained levels of leadership in the organization that we never dreamed of and we’ve gotten to travel to so many places that we might never have gone to, Japan, Germany, Winnemucca, all over the place.”