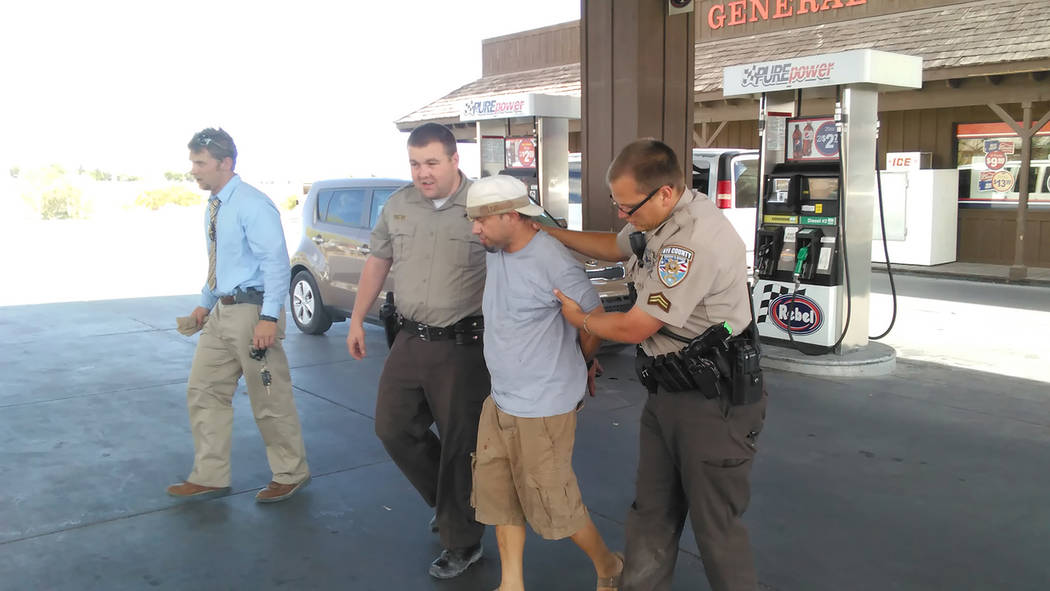 Selwyn Harris/Pahrump Valley Times Pahrump resident Richard Adams is taken into custody on several charges, including domestic battery. Deputies located Adams at a local convenience store just before 3 p.m. on May 25, where he proceeded to try and purchase fuel. A driving under the influence charge was also tacked on to his other charges. 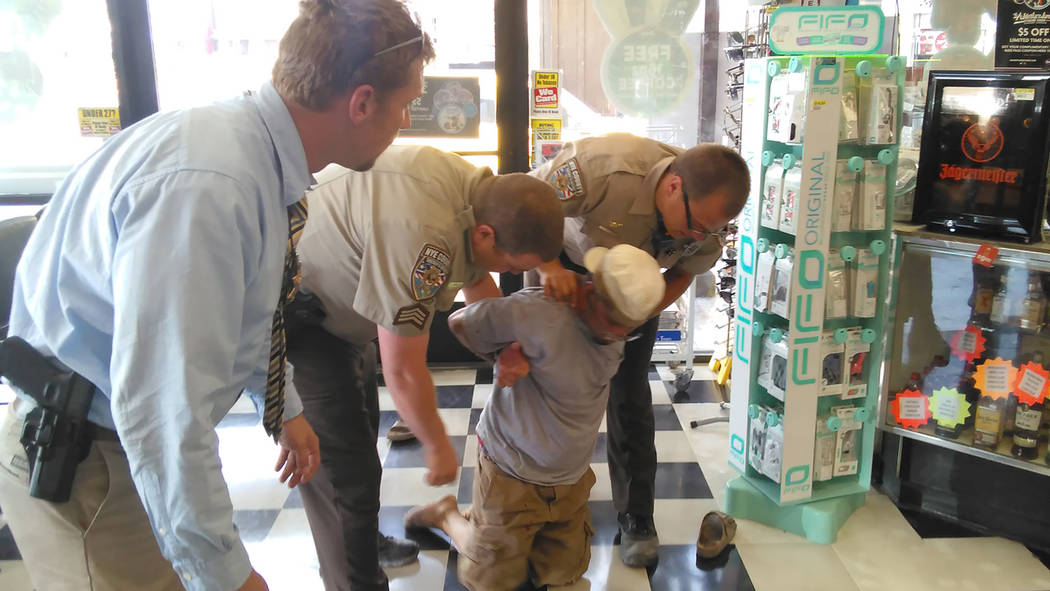 Selwyn Harris/Pahrump Valley Times Nye County Sheriff’s deputies and a detective apprehend Pahrump resident Richard Adams in the Rebel convenience store at Highway 160 and 372 on May 25. Adams was charged with domestic battery, use of a deadly weapon, DUI and injuring or damaging a vehicle.

Pahrump resident Richard Adams, 54, would not go down without a fight as Nye County sheriff’s deputies attempted to arrest him on domestic battery charges inside the Rebel convenience store at Highways 160 and 372.

Nye County dispatchers received a call around 2:50 p.m., May 25 along the 300 block of Linda Street.

Adams, according to deputies, left the scene in a Volkswagen Jetta, and was located inside the Rebel store.

At least three deputies attempted to speak to Adams at the checkout counter, when he began to resist them inside the store. Adams, who appeared to be under the influence of an unknown substance, was eventually led to a deputy’s marked cruiser and placed under arrest, a Nye County Sheriff’s Office news release said.

The backstory, according to the arrest report, stated that a witness saw Adams actively swinging a stick, striking a woman in a vehicle.

While en route to the address, the witness then advised that the male had left the scene in a gray Volkswagen sedan and gave the plate number.

The witness additionally reported the male, identified as Adams, was intoxicated.

Deputies located the vehicle and Adams, who was the driver and sole occupant, driving into a gas station, where he proceeded to try to buy $6 worth of gas.

“Deputies immediately noticed splattered blood on his shirt, slurred speech, blood splatters on the vehicle and a strong odor of an unknown alcoholic beverage from his person,” the arrest report stated. “Deputies were able to identify the male as Richard Adams, who did state he had a physical altercation with his live-in girlfriend. It should be noted within his vehicle and in plain view were an open, empty wine bottle and a large cane that looked like a wooden stick. The cane was splintered into two pieces and had blood spots.”

As deputies were interrogating Adams, additional deputies made contact with the victim.

“She was covered in blood, and sobbing loud enough to be heard by deputies outside the trailer in which she was located,” the report stated. “Blood was seen throughout the trailer, and next to the trailer was her vehicle with a shattered driver’s side window and side mirror.”

The report went on to state that the victim said her live-in boyfriend smashed her window with a cane, downed a bottle of wine, struck and her with the cane directly in the face, breaking her nose, then drove off in a “scary” manner.

The victim was medically assessed and was transported to Desert View Hospital.

Adams, meanwhile, was taken into custody where a voluntary breath test resulted in an above the legal limit reading.

He was charged with domestic battery, use of a deadly weapon with substantial bodily harm, damaging a vehicle and driving under the influence.

His initial court appearance is scheduled for 1:30 p.m., Aug. 1, in Pahrump Justice Court’s Department B.