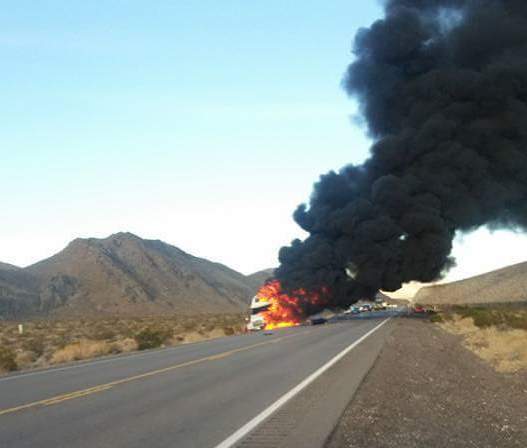 A Pahrump man died in a head-on collision with a semi truck over the weekend on U.S. Highway 95 near Mercury.

Bryan Gonzalez, 20, was pronounced dead at the scene of the crash involving his red 2003 Mitsubishi Eclipse and a 2003 Freightliner tractor-trailer Sunday, according to the Nevada Highway Patrol.

The preliminary investigation revealed that on Dec 11. at about 3:29 pm, Gonzalez’s Mitsubishi Eclipse was heading southbound on U.S. 95, south of Nye County mile marker 11, and the semi truck was traveling northbound on U.S. 95.

For unknown reasons the Mitsubishi crossed the center line and collided head-on with the semi tractor-trailer. Gonzalez, the sole occupant of the Mitsubishi, was ejected.

The semi continued northbound, where it entered the right dirt shoulder and caught fire.

The driver of the semi was transported to Desert View Hospital with nonlife-threatening injuries, NHP said.

The crash marks the 61st fatal crash, resulting in 70 fatalities, for 2016 in the Nevada Highway Patrol-Southern Command’s area.