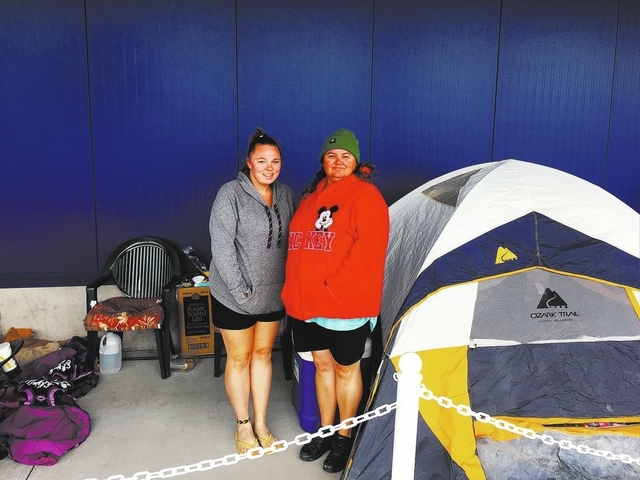 LAS VEGAS — With all the buzz surrounding the grand opening of the new IKEA store in Las Vegas, droves of eager customers lined up outside the media furniture chain’s building ahead of its opening Wednesday.

Nestled near the front of the approximately 80-person line Tuesday morning, at the site on Durango Drive just off the 215 Beltway in Las Vegas, were two Pahrump residents who caught the IKEA bug from roughly 70 miles away.

Lily Murrin and Sabrina Lutz, niece and aunt, both found out about the grand opening event for IKEA, a multi-national furniture company known for its ready-to-assemble furniture and inexpensive prices, online and thought it would be fun to take part in the festivities.

“For one, it’s the experience,” Murrin said. “I think everybody should do this for experience.” Lutz added, “It’s been a really good experience, we’ve met nice people and have had fun.”

To their knowledge, they were the only two people from over the hump that traveled to camp out.

“I think we are the only crazy ones,” Lutz said. “I heard that some other people were coming, but I haven’t seen anyone else that came from Pahrump.

With Lutz being a housewife and Murrin unemployed at the moment, the pair of family members had the time on their hands to wait out the opening, setting up their makeshift campsite at 4 a.m. Sunday morning.

“I had nothing better to do than to sit out here,” Murrin said.

Their spot in line included a pair of chairs, a tent and a cooler full of fruit and beverages, making it as comfortable as they could while they spent the almost four days in line in front of the 351,000-square-foot outlet.

The big draw to be some of the first customers to the new IKEA store was the giveaways. The big ticket item was a free three-seat couch that was to be given away to the first 42 customers in line, in honor of the Las Vegas location being the company’s 42nd U.S. store.

Luckily for Murrin and Lutz, they were in the group of the first 42 customers, as Lutz was number five and Murrin was number nine in line, assuring their trip back over the hump would include a new couch.

The two split their sleep schedules, to ensure someone could wake the other up when an IKEA team member came out to check on those in line.

Ensuring the IKEA diehards didn’t leave with a bad taste in their mouths, the staff fed those waiting in line. To keep themselves busy they mingled with other campers, who were are mostly from Las Vegas and the store had activities for the group throughout the three days to keep them occupied and entertained, with many prizes awarded being food items.

In addition, there was an air conditioned trailer with restrooms for the guests, and a charging station to ensure those in line had a place to charge their phone and other electronics they may have had.

Aside from being fed by IKEA, the pair of Pahrump residents had visitors stopping by to make sure they were taken care of, if a person left their spot in line for more than 10 minutes they were disqualified.

“My best friend came by last night with my godson and brought us food,” Murrin said. “She thinks it’s cool. If she didn’t have to work she would have done it too.”

Aside from the ones visiting, their family and friends back home have been supportive for the most part.

“They’re fine with it,” Lutz said. “At first my husband said no, you won’t get a good spot in line, there will be so many people in Vegas before you. Then when I told him that I’m number five, he was like, ‘Oh good.’”

The grand opening marked the first time Murrin had been to an IKEA, but Lutz said she’s been to one in California before.

Aside from taking part in the grand opening, both Murrin and Lutz said they will be back to IKEA from time to time whenever they are in need of a household item, as the prices are tough to beat.

“The furniture and the prices are way cheaper here,” Murrin said.

“We don’t have any furniture store in Pahrump that’s great,” Lutz added.