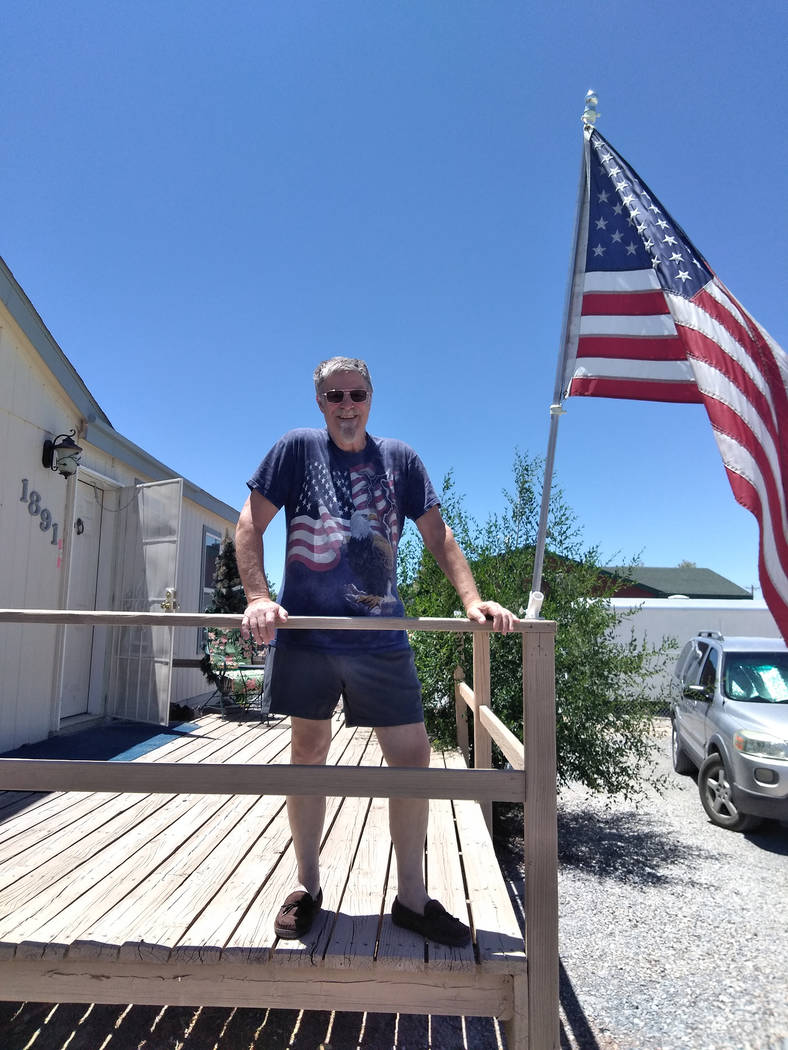 Selwyn Harris/Pahrump Valley Times Bill Gray, a U.S. Air Force veteran who served during the Vietnam era, moved to Pahrump from Boulder City, roughly a year ago. Gray said he chooses to fly the flag on his property along Gamebird Road because he's an "American through and through." 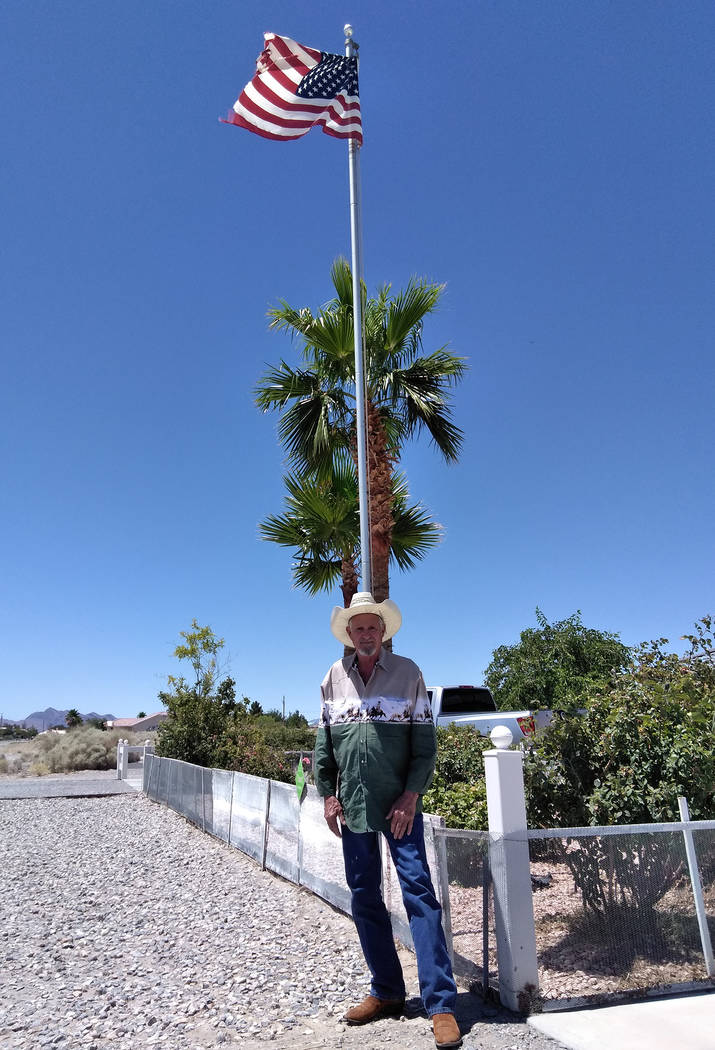 Selwyn Harris/Pahrump Valley Times Local resident Sam Davis, A U.S. Navy Veteran displays the American flag at his South Mt. Charleston property to honor those who have fought and died for the symbol of freedom. Davis said he installed the flag pole in his front yard more than 20 years ago. 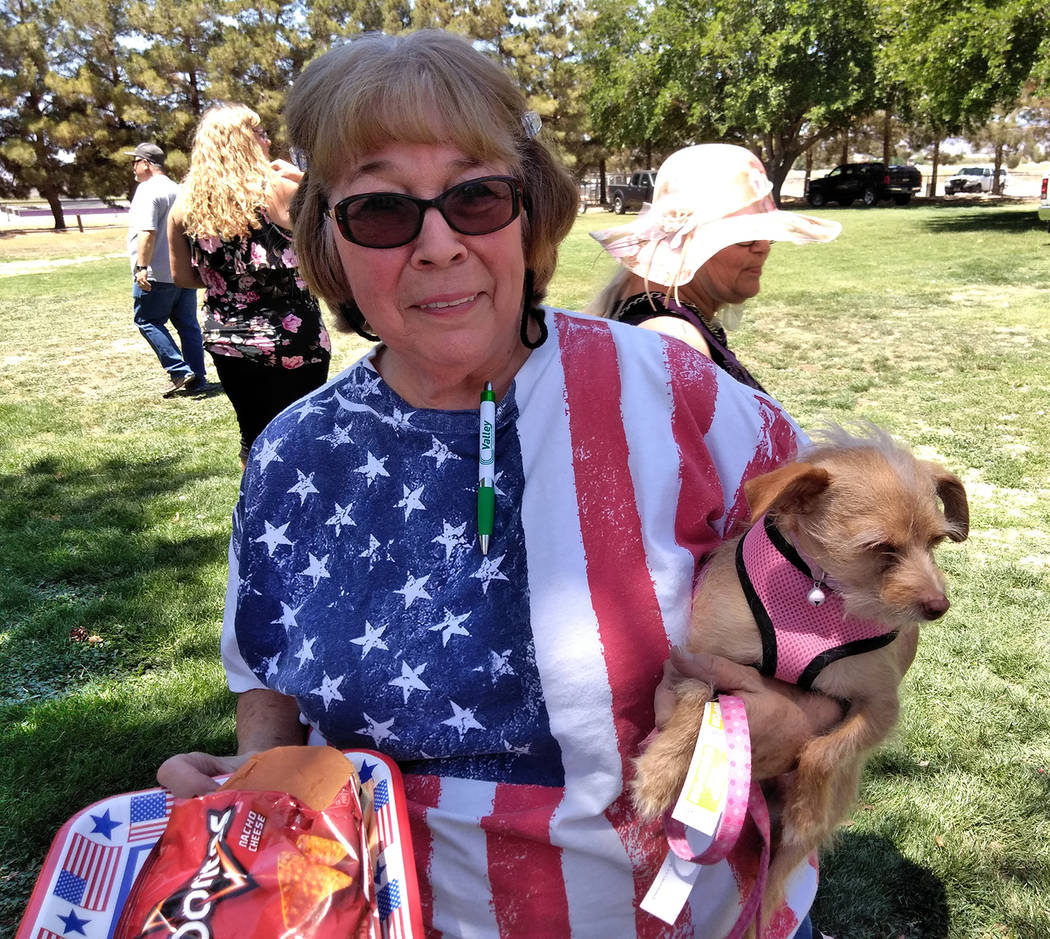 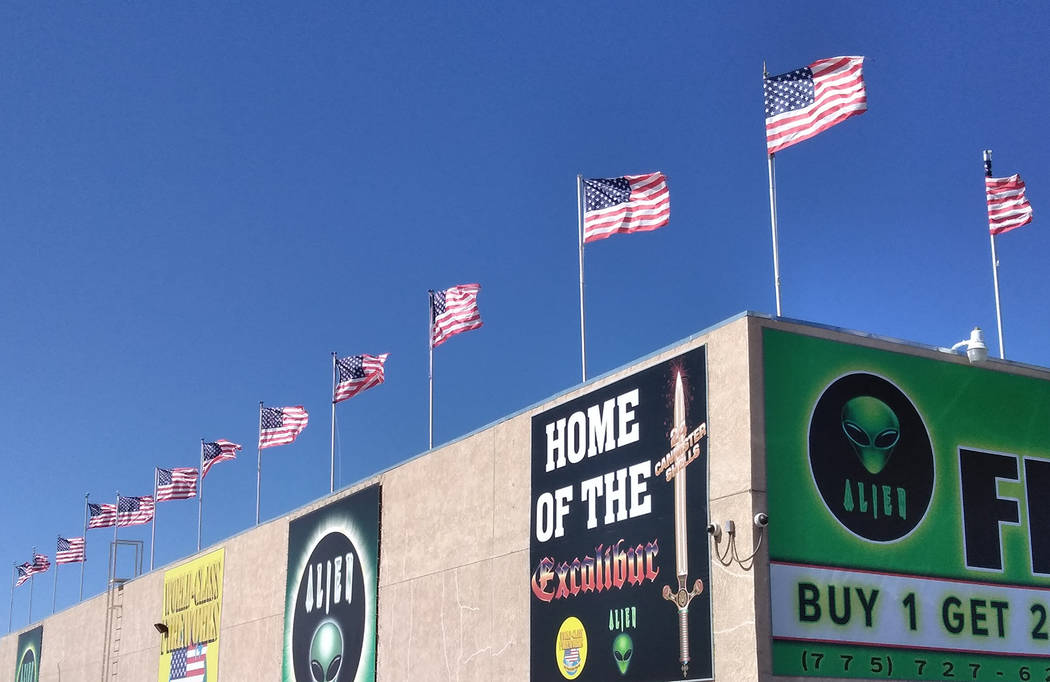 Selwyn Harris/Pahrump Valley Times The rules for handling and displaying the American flag are defined by a law known as the U.S. Flag Code. For example, the flag should never be displayed with the union down, except as a signal of distress, in instances of extreme danger to life or property. 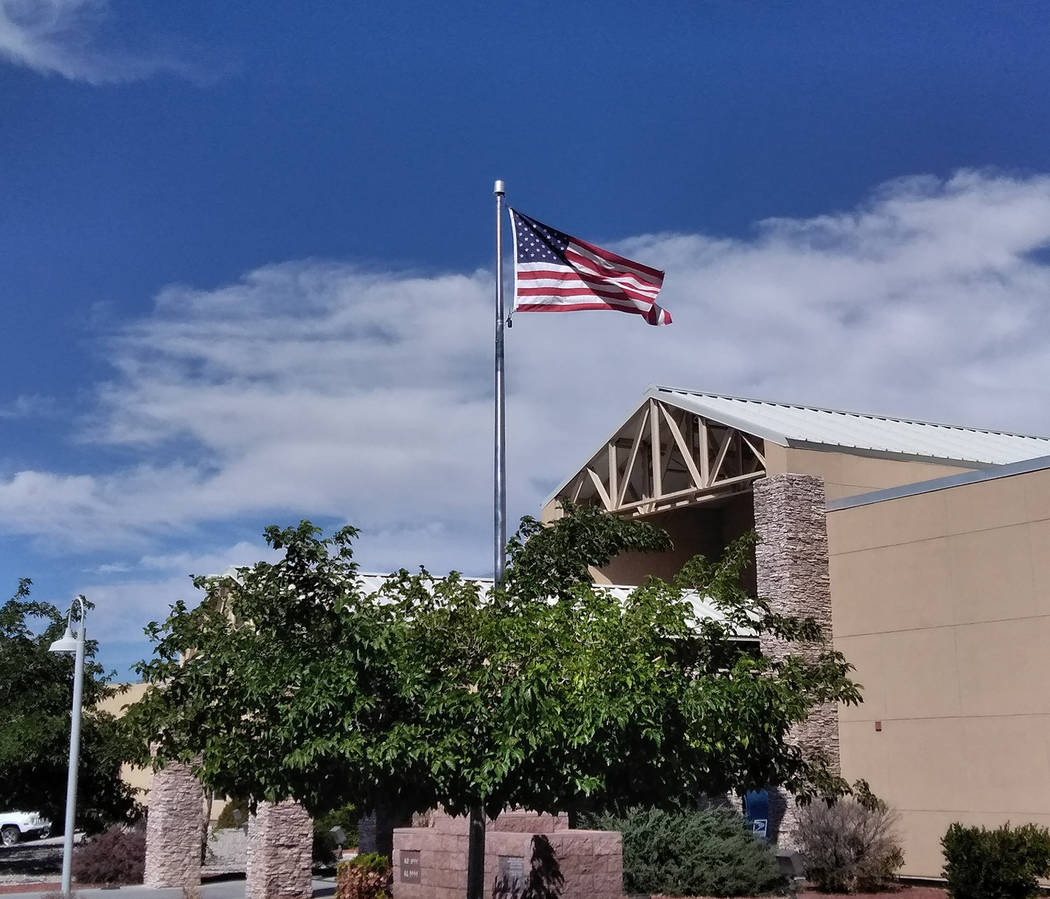 Selwyn Harris/Pahrump Valley Times According to the United States Flag Code, it is the universal custom to display the flag only from sunrise to sunset on buildings and on stationary flagstaffs in the open. However, when a patriotic affect is desired, the flag may be displayed 24 hours a day, if properly illuminated during the hours of darkness.

They are the ultimate symbols of freedom, justice and the American way of life.

Indeed, there are many monikers for the American flag, such as the Star-Spangled Banner, the colors, the standard and more.

During this time of year, it appears that the American flag gains additional popularity, as Independence Day draws near.

For evidence, a leisurely drive around any neighborhood in town reveals more and more local residents and businesses are displaying the flag on their respective properties.

Just last month, news came down that Pahrump was named 2018’s most patriotic community in the Silver State.

The information was supplied by Insurify, an American insurance comparison shopping website.

In a news release, Director Richard Knapp stated that Insurify analyzed more than 900,000 auto insurance applications, indicating whether any individual named on the policy was a current or former service member.

Local resident Bill Gray is one such veteran who proudly displays the flag in his front yard along Gamebird Road.

Gray, an Air Force veteran who served during the Vietnam era, moved to Pahrump from the Las Vegas area just over a year ago.

“I choose to fly the flag because I am an American through and through,” he said. “People have died for that flag, so to me, it’s all about showing respect for this country and the brave men and women who have fought for this country. This is actually my second flag since I moved here to Pahrump. The first one fell apart, because the weather will do that after a while.”

Regarding the meaning of patriotism, Gray simply referenced the United States Constitution.

“I would define patriotism as love for our country and caring about the Constitution,” he said. “It’s a special document and there is no sense in trying to change it, especially our First and Second Amendments. They are there for a reason.”

Gray also said that he makes certain to adhere to the rules of flying the American flag after dark.

“I don’t take my flag down at night because I have lights that illuminate it,” he said. “If you’re going to fly the flag at night, it has to be illuminated according to the flag code in this country. I would encourage others to fly the flag in their front yard. People need to wake up and see what’s really going on in Washington. People need to wake up, put their hand over their heart and swear allegiance to this country, otherwise, there’s the door. Nobody stopping them.”

On Wednesday, July Fourth, Gray said he plans to do exactly what he did last year.

“We went to a location past the DMV on Basin Avenue to watch all of the fireworks,” he said. “You can see everything from that vantage point.”

Davis, who served from 1962 to 1980, sat with his nephew and spoke candidly about why he chooses to fly the flag in front of his home.

“I have flown that flag here for 20 years, and when I lived in San Diego I flew the flag at my house as well,” he said. “I built my house here back in November of 1999, and I fly it because people have fought and died for that flag, for people like you and me to have freedom. I did my 20 years in the United States Navy and I am proud to fly that flag.”

“I believe patriotism is what you make out of it,” he noted. “As American people, it doesn’t matter what race or religion you are. We believe in what the country stands for. I’m still a young man of 75 years, and I have been around the world three times. I’ve been to some of these third-world countries and when people would ask me what country you love the most, I, of course, tell them it’s the good old USA.”

Davis also said he’s purchased his share of American flags over the past two decades.

“I buy these flags by the dozens and the one that’s flying right now is coming down because it’s getting tattered and torn,” he said. “When I put it up it always flies. When it gets torn and tattered, I take it down, and raise a new one.”

Regarding his July Fourth plans, Davis said he’s going to relax at home.

“I’m going to do what I’ve always done, which is drink beer and barbecue,” he said with a laugh. “I also thank the Lord that I’m living here in a free country that our forefathers left for us.”

Affectionately known as “The Flagman,” Ray Mielzynski is a local figure who regularly bears the standard while walking along Highways 160 and 372.

Mielzynski, a 40-year resident of Pahrump is also known for his perennial candidacy for Nye County sheriff as he has run for the office each election cycle for many years, ala Pat Paulsen and the American presidency.

Though he considers himself as a staunch constitutionalist and Bill of Rights advocate, he said he does not display the American flag outside his home.

“They usually they get torn up when they’re outside, but I have two flags inside the house, always on display, and I also have one in my car,” he said. “I walk with the flag because I want people to pay attention to what is going on.”

Regarding what is going on, Mielzynski, a longtime courtroom observer, pointed to the legal justice system in Nye County.

He suggested that too many citizens are getting thrown in jail for insignificant infractions.

“Because I am a constitutionalist, I see the abuse of the Constitution and Bill of Rights in the court system that we have,” he said. “People get charges stacked against them. I am standing up for the rights of the people with the Bill of Rights. I don’t have to make this stuff up, because anybody can go in the courtroom and see what is happening. I am there in person to see it. I have been a court observer for the past 16 years on a regular basis. I don’t just come in once a week to see what’s going on. I try to spend as much time there as I can.”

Moreover, Mielzynski said he’s gone the distance for some individuals who find themselves caught up in the court system.

“I see people getting jail sentences because they cannot pay a small $115 fine and they get six months in jail. I will stand up and say I will pay that freaking fine, because this is ridiculous. Sometimes the judges don’t like it, but the fine gets paid by me. I don’t have to hear it from a friend, who heard it from another friend, who heard it from another, that they’ve been messin’ around. This is what’s happening here and you can take that to the bank as Baretta said.”

Mielzynski said he started walking with the flag along the highway back on May 26, 1998.

“I am now in my 21st year,” he noted. “I used to do it three times a day but now that I am 74 years old, I do it once a day. In the hot weather, I can only do about a half an hour of walking with the flag. As long as I am able to walk, I will walk the highway with the flag and Bill of Rights. I believe that I am on a mission from God because I am standing up for people’s rights. When I see people abused, I do something about it.”

Based on simple observation, it would be difficult not to locate a neighborhood street without at least one flag displayed on a property, with the exception of Flag Street near Pahrump Valley Boulevard, where no homes appeared to display the American flag.