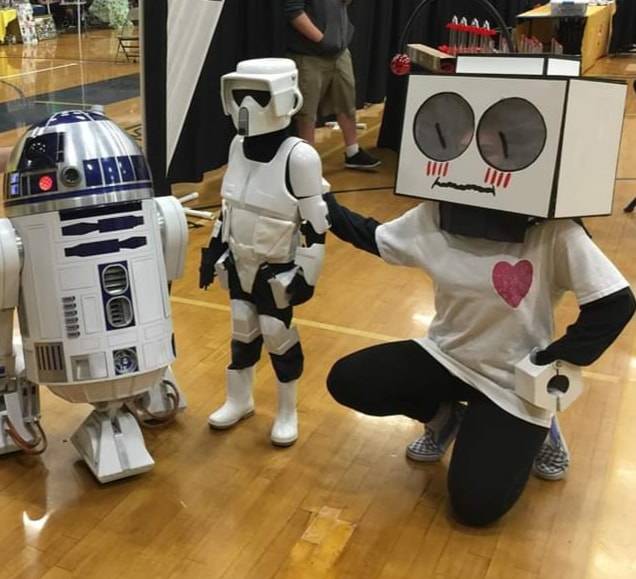 Awkward Silence/Special to the Pahrump Valley Times In May 2019, FIRST (For Inspiration and Recognition of Science and Technology) announced the 2019-20 season was going to be named FIRST RISE, which was powered by Star Wars: Force for Change. Star Wars characters and the Pahrump Southern Nye County 4-H team Awkward Silence mascot was on scene during the state robotics competition in Sparks.

The FIRST Tech Challenge, or FTC, is one of four major divisions of the FIRST organization, a worldwide educational program designed to get school-aged children active in the fields of science, technology, engineering and mathematics.

“FIRST is really a program that goes from young to old, and FIRST Tech Challenge targets the middle school to high school range of students,” said Awkward Silence team captain and lead programmer 17-year-old Dylan Riendeau, also noting the slight overlap with FIRST Lego League and FIRST Robotics Competition, the levels of the program directly below and above FTC. The Nevada State Finals took place February 21-22, with nine team members, two coaches and a staffer representing Awkward Silence at the event.

Nonprofit FIRST Nevada, an organization supporting several robotics competitions for youth in the state, is behind the FIRST Tech Challenge.

“The [actual] robot competition is what they do in one day at State,” Riendeau recalled. “You show up in the morning, you gather your robot … It’s kinda like a race,” Riendeau explained. “If you’re doing NASCAR and a part falls off your car, then you’re going to obviously see if you can fix that. That’d be in the pit in between your laps. If you, say, have a part that falls off your robot during your matches, then once that match is done you want to go back to your station and repair it, though ideally, you’d have no parts fall off your robot.”

With a great many obstacles standing in the way of victory, the team had to develop innovative solutions. The state finals were held at Reed High School in Sparks, where teams can, in addition to the robot game, be recognized for success in categories like inspiring others and community outreach. For teams hailing from Southern Nevada, transportation and lodging costs to reach Sparks can add up quickly. Fortunately for Awkward Silence, the team has garnered immense community support, combined with year-round fundraising, allowing them to make the trip and compete.

The Pahrump Valley High School Circuit Breakers, another Pahrump robotics team, was also at the state championships. The team placed third for design.

Riendeau also noted that this year, in addition to the typical presentations of game rules and promotional clips, the opening ceremony also featured a memorial for the late FIRST advisor, Woodie Flowers, who died in October of last year and coined the term “gracious professionalism,” according to information on firstinspires.org

According to Riendeau, gracious professionalism is the embodiment of all FIRST robotics events, no matter their size.

“You [always] need to take into consideration what the gracious thing to do is, such as if someone [else’s] robot isn’t performing as good as it can and you have the resources, the time and the ability to help them … even though you’re not working directly with them, or you might even be working against them, the gracious thing to do would be to help them through their problems so that they as a team can have a better experience,” Riendeau said.

This spirit of friendly competition has been worn on the collective sleeve of Awkward Silence ever since its inception during the 2017-2018 competition season under the auspices of the Southern Nye County 4-H program and is reflected in everything they do. “It takes nothing [from you] for [another team] to have a lot more enjoyment out of the day. It’s never fun to go in and not be able to do something because of an issue you had, and then have nobody help you fix the issue, so you’re stuck there doing nothing.” This set of strong morals is what allowed Awkward Silence to win their first “Motivate Award” during the 2018-2019 season, a judged prize for making FIRST known in their community and encouraging others.

Competing in a FIRST Tech Challenge competition is no easy feat. “One of the things we focused on this season was ensuring that we were ready for the emergency if it were to arise,” said Jennifer Riendeau, one of Awkward Silence’s team coaches and Dylan Riendeau’s mother. “We ensured we had a fresh battery for every single start of every single match … Which was a pretty big investment for the season but I think it ended up being well worth it.”

After returning from the competition and the end of the season, Awkward Silence is looking toward a hopeful yet somewhat uncertain future. “Our team members are aging up. Next year they’re all going to be seniors in high school … so they need to basically find and build up their replacements,” Jennifer Riendeau said. “We’re looking for self-motivated people that want to join a team and are willing to put in the hard work. We do like to have a lot of fun, but it is a lot of work and we gotta make sure it’s getting done. It’s a very huge time commitment.”

Riendeau also said that they’re looking to round out the team with high school-aged students who have an interest in journalism, graphic design, digital modeling, and public relations. For the remainder of the off-season, Riendeau said, “We’ll be discussing the summer schedule for our car washes [and] bake sales …We’re definitely trying to find a good group of sponsors for some of the fees and stuff that we have to cover.”