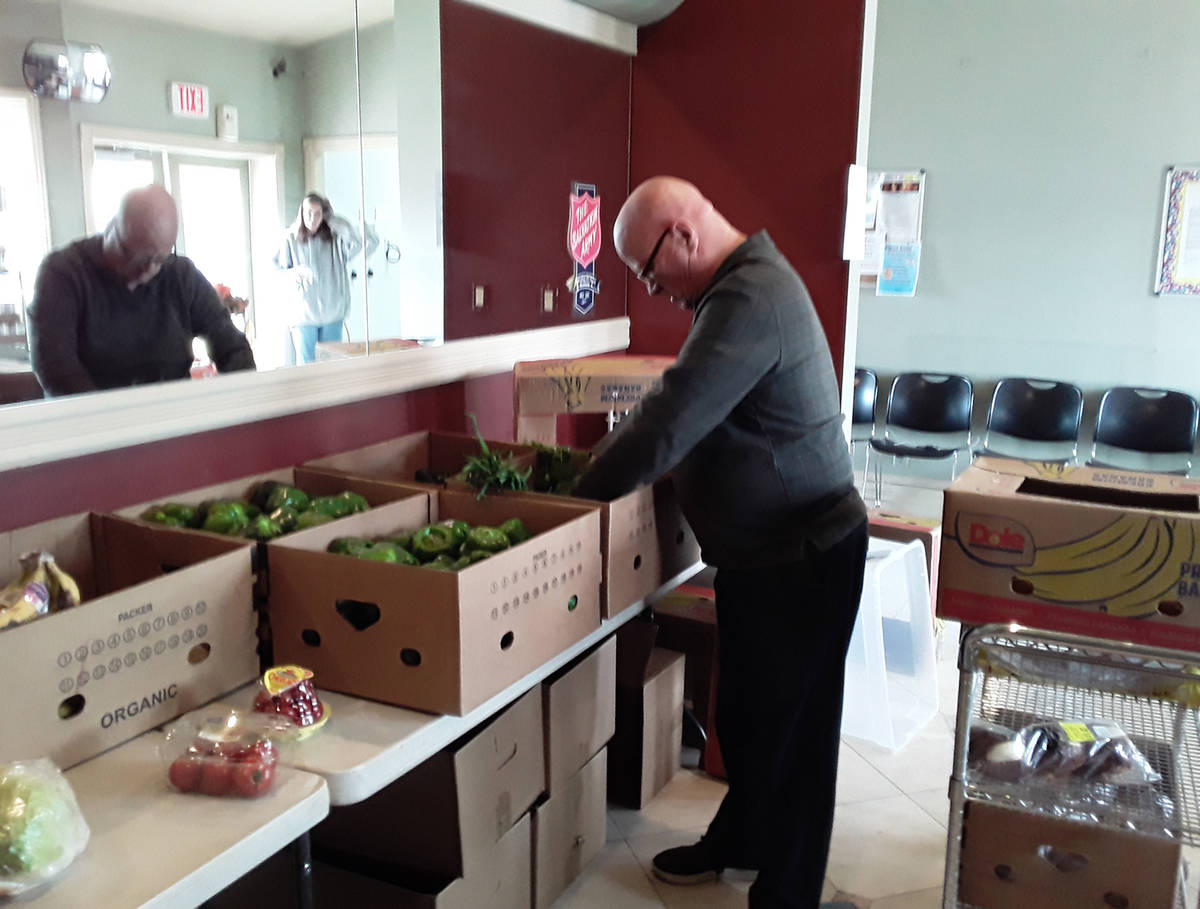 Pahrump Salvation Army Director of Social Services Jon Watt is perplexed why more local individuals and families are not utilizing the services his organization provides.

Last week Watt spoke about why he believes members of the community are not frequenting the Salvation Army’s food pantry as much as they did last year.

“I don’t think there’s so much of a slowdown of families having a need as much as, perhaps, when we started introducing the seniors program,” he said. “When we started the program, we got a lot of press both on the TV, radio and of course in print, that maybe sent the wrong message and we were noticing that we were not serving many youths. I think it’s because parents aren’t bringing the kids in.”

It wasn’t until he was preparing a recent grant proposal that he discovered one of the reasons for the decline in those seeking services.

“I then had some concrete evidence that the number of families with kids had dropped off,” he said “I’m attributing the drop off here to a combination of two things. It was COVID-19 to an extent because the families didn’t want to come out and expose their kids and that was part of 2020. But we can also attribute it to the fact that we were re-emphasizing our seniors program, so they may have thought that we were only concerned about seniors, which is not true because I continue to bring things in specifically for kids.”

What the data says

To buttress his assumption, Watt noted that when he began looking at the numbers of clients the organization has served, going back from 2015 to 2019.

“If we just looked at those families with kids under the age of 18, that would be about 25 to 26 percent of my caseload, and all of a sudden it drops to a little over 19 percent and that’s a major dropoff, but at the same time, and beautifully so, the number of seniors have increased, which was to be expected since they’re being told ‘we’ve got something for you.’ But now they’re about 36 percent of the caseload. We need to reach all of those in need in Pahrump and that’s not a takeaway from the seniors but it is to say, hey, parents, come and get your stuff and take care of your kids. I know they are not getting all of what they need from the schools for their kids.”

Additionally, Watt noted that the decline in the number of families and individuals who rely on the food pantry also affects the amount of money received by way of grants.

“It’s great that we’ve got the grants for the seniors, but we already have that,” he said. “Now I’m spending the money that I’ve got that’s not being covered by the grants to bring stuff in for the young families. We now have three separate pantries and we run them simultaneously, but each one is a separate entity. So we have our senior program and we still have our regular pantry that we’ve always had for years.”

Though Watt and his volunteers normally provide food items to upward of 20 to 30 families and individuals a day, he noted that last week only 10 stopped by for their food needs.

“That’s because we had the seniors picking their food up at the beginning of the month, which really means that an individual who has kids comes in now at the latter part of the month, anywhere after the 15th,” he said. They’re going to be in and out, because it’s enough time to update their information if we need to, and get them their items so they can then go on their way.”

Waste not, want not

Another important topic of discussion was the shelf life of some of the food items provided by the Salvation Army, especially fresh produce.

“The canned goods of course have a very long shelf life,” he said. “The wilted produce ends up going to some of the pigs and goats in the valley, so we’re not throwing it away. It does go out to feed the animals, but I’d much rather see it go out to feed humans. I also want to say that we have a rummage sale on April 10th and we’ll be running them at least once a month or sometimes twice a month. We have various organizations who come in and run them for us. The items are donated from the community. The volunteer organizations in town are all working together to meet the needs of the community.”

Regarding the operations of other food pantries in Pahrump, Watt said some have adjusted their operation hours, while others have even closed down.

“When COVID-19 hit, a lot of the food banks ended up in the situation where they were staffed primarily by volunteers,” he said. “Most of those volunteers are senior citizens, and those organizations were taking steps to protect their clients and their staff who were working. They said rather than being open, three, four or five days a week, they went down to one day and some of them closed down permanently. The Salvation Army stayed open and we have not changed our hours at all, so we are still open from 8:30 a.m., to 2 p.m. If a client calls and says they can’t make it at 2 p.m., for whatever reason, we’ll leave the food out so they can come in and get their items a little bit later.”

The Pahrump Salvation Army is located at 721 Buol Road, next to Star Nursery.