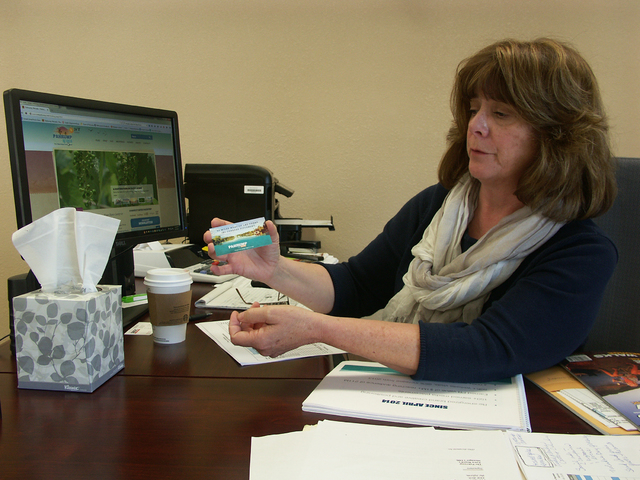 Pahrump Tourism Director Arlette Ledbetter’s beaming smile this week pretty much summed up her feelings on how the town’s tourism efforts are moving along.

Ledbetter said BRAINtrust, a Las Vegas-based marketing firm hired by the town is central in the renewed marketing and branding achievements.

BRAINtrust is also using social media Facebook and Twitter to tell the world Pahrump is open for business.

She spoke about 2014’s year-end results on the marketing campaign where prospective tourists gained valuable information about the town, through what’s known as earned media placements where publicity is gained through advertising.

“We are trying to do some creative positioning with Pahrump,” she said. “One of the really great benefits of our efforts is we’ve gotten 150 plus earned media placements. That is a PR value of about $1 million. I hate to use the free in anything, but it’s essentially free advertising. That’s media that is picked up from the materials that we produced.”

As an example, when BRAINtrust recently issued a press release on the opening of the new JetPack America facility at the Spring Mountain Motorsports Ranch, the town received inquiries from all corners of the United States and beyond wanting to learn more about the community.

Ledbetter noted that potential tourists are also lured through a number of stories penned by local business owner Jack Sanders of the Sanders Family Winery and herself.

“The Los Angeles Times picked it up and ran it as a feature,” she said. “The publication Snowbirds and RV Travelers picked up a couple of stories on the history of the winery here in Pahrump and that was picked up in Canada. That comes out to 211 million in the audience reach.”

Additionally, the marketing firm has solidified a relationship with no less than two major Las Vegas publications.

“BRAINtrust established a relation between Pahrump and Las Vegas Man and Las Vegas Woman Magazine,” she said. “In the agreement, they have featured us monthly and in December they featured Stockman’s Steakhouse and Mountain Falls Golf Course. They also featured Spring Mountain Motorsports and Country Club in the past.”

Earned media placements were just one aspect of the renewed marketing campaign.

Ledbetter said the tourism department’s website has experienced a significant increase in traffic.

“We have 50,000 website visits and that’s a 95 percent increase in website visits,” she said. “I attribute that to all of our hard work. The tourism board has invested a lot of time and a lot of energy.”

Along with the increase in online traffic, Ledbetter said there are plans to perform a complete makeover of the visitpahrump.com website.

“We have that second-cycle grant to re-skin the website,” she said. “We are going to bring it brand consistent and we’ve been able to do so much more with our product and we have 4,000 new Facebook likes. We started last April with about 300 likes and we exceeded our 5,000 mark on Wednesday of this week. It’s really something to celebrate and it’s related to visitpahrump.com.

The tourism director also said any local business owner who believes their business can benefit from increased tourist traffic should contact her office.

“The website provides information regarding day trips, things to do in Pahrump and events that are coming to the community,” she said. “If you have a business here that is tourism related, you can contact me and I’ll get you on that website.”