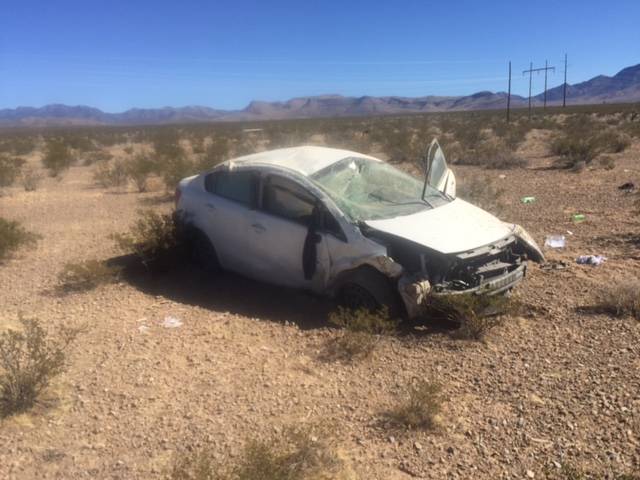 Special to the Pahrump Valley Times An individual from a single-vehicle crash on Highway 160, near the Tecopa turnoff, by mile marker 32, led to a transport by Mercy Air 21 to University Medical Center in Las Vegas on Oct. 22, 2017. Pahrump Valley Fire and Rescue Services' Medic 5 ambulance was dispatched to the scene as a mutual-aid assignment. 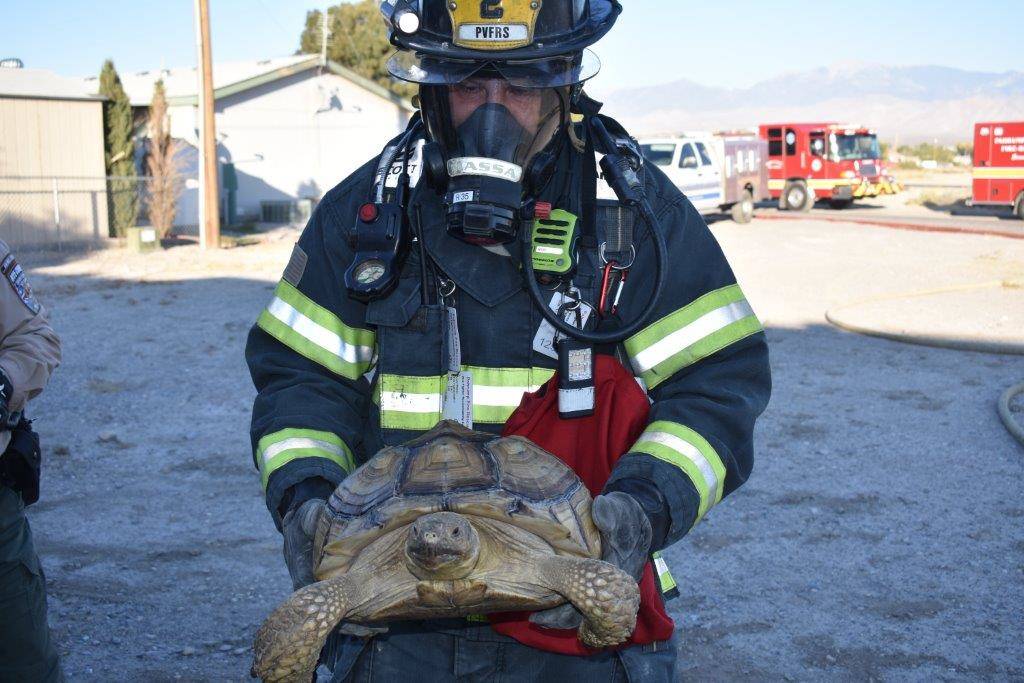 Special to the Pahrump Valley Times Pahrump Valley Fire and Rescue Services rescued 18 exotic animals from a structure fire at 40 S. Comstock Circle East on Oct. 19, 2017. The list of exotic included arachnids, reptiles and some canines. 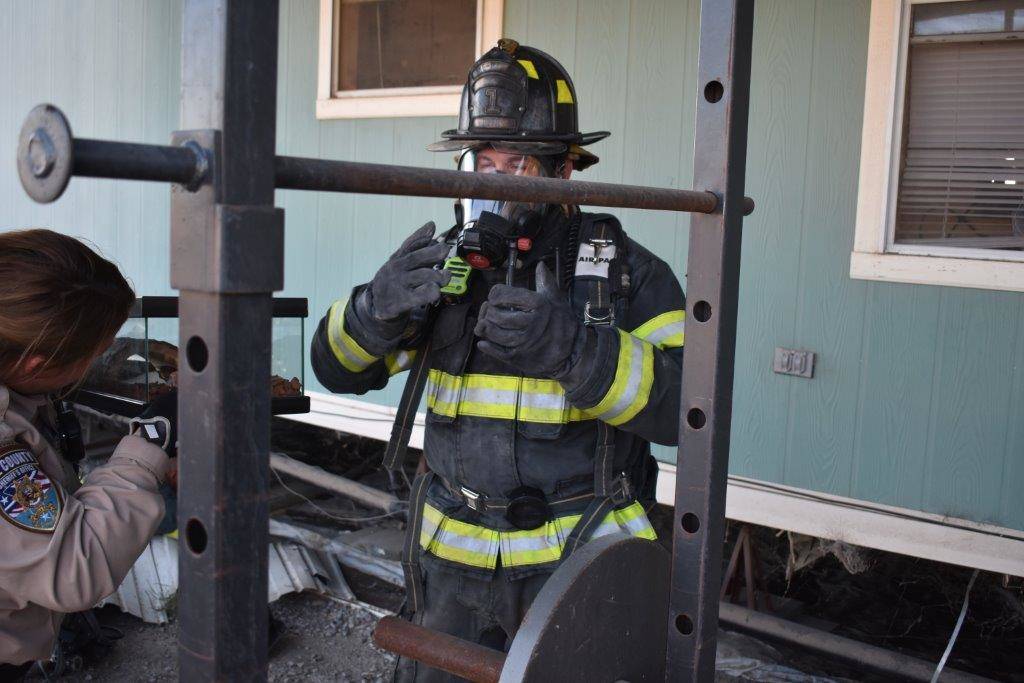 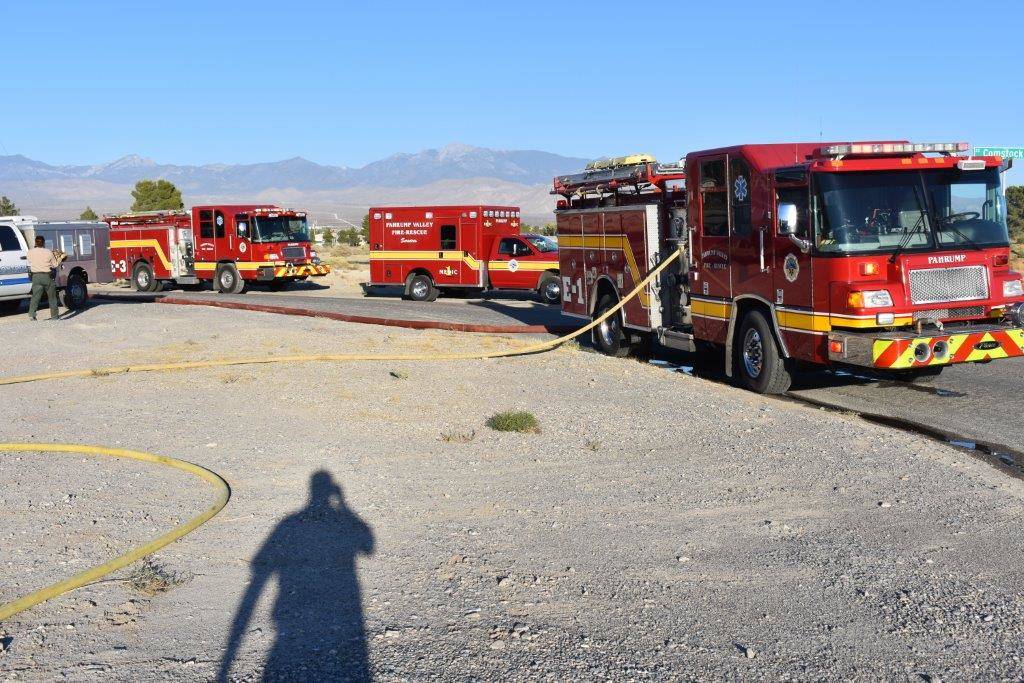 Pahrump Valley Fire and Rescue Services crews helped save the lives of more than a dozen exotic animals from a structure fire last week, along with assisting in saving the life of a motorist injured in a rollover crash and battling other blazes.

Pahrump Valley Fire and Rescue Services Chief Scott Lewis said crews were dispatched to 40 S. Comstock Circle East for a report of a structure fire on Oct. 19, where they found smoke coming from the underside of a doublewide manufactured dwelling, he said.

Upon investigation, it was discovered that there was an active fire on “the underside of the structure, underneath the floor running from one end of the doublewide manufactured dwelling to the other,” Lewis said.

“It was also determined that the fire had presented on the interior in an area of the living room,” he said.

The investigation also revealed that the occupants were not in the structure as it burned, though 18 exotic animals remained inside—including reptiles, arachnids and some canines.

“Crews started removing some of those pets from the structure, as the suppression crews were on the underside for suppression,” Lewis said.

“In approximately 20 minutes, it was placed under control; therefore, the remainder of the pets were sheltered in place,” he said.

An occupant in the structure was treated for smoke inhalation at the scene and refused transport to the hospital, Lewis said.

The cause of the fire was identified as likely being wiring and was accidental in nature, he added.

Pahrump Valley Fire and Rescue was dispatched for a mutual-aid assignment with Clark County for a one-vehicle rollover crash on Highway 160, near mile marker 32, near the Tecopa turnoff, on Oct. 22.

Medic 5 was returning from a transfer in Las Vegas and came upon the crash, Lewis said.

Upon arrival, it was discovered “that the patient had sustained injuries that were consistent with trauma criteria,” Lewis said.

The patient was transported to University Medical Center by Mercy Air 21.

Crews were dispatched to the 3300 block of Dandelion Street at approximately 9:20 a.m. on Oct. 21 to investigate a report of an industrial accident with possible entrapment.

“Crews arrived and found that a patient had been briefly trapped underneath a steel beam,” Lewis said.

The patient was transported to the hospital with an upper-extremity injury.

Through investigation, it was determined that it was a stovetop kitchen fire with no direct extension to the dwelling.

Lewis said crews were also dispatched to a brush fire on Oct. 17 near Hardy Lane and Linda Street.

“Upon arrival, crews found a slow-moving ground-cover fire burning along the side of the roadway,” Lewis said. “There were no immediate structure exposures, and there were no injuries.”

The blaze was contained and extinguished quickly, he said.

In light of the U.S. Bureau of Land Management and Forestry lifting restrictions, the local fire-rescue is removing the burn moratorium, the agency stated in a news release.