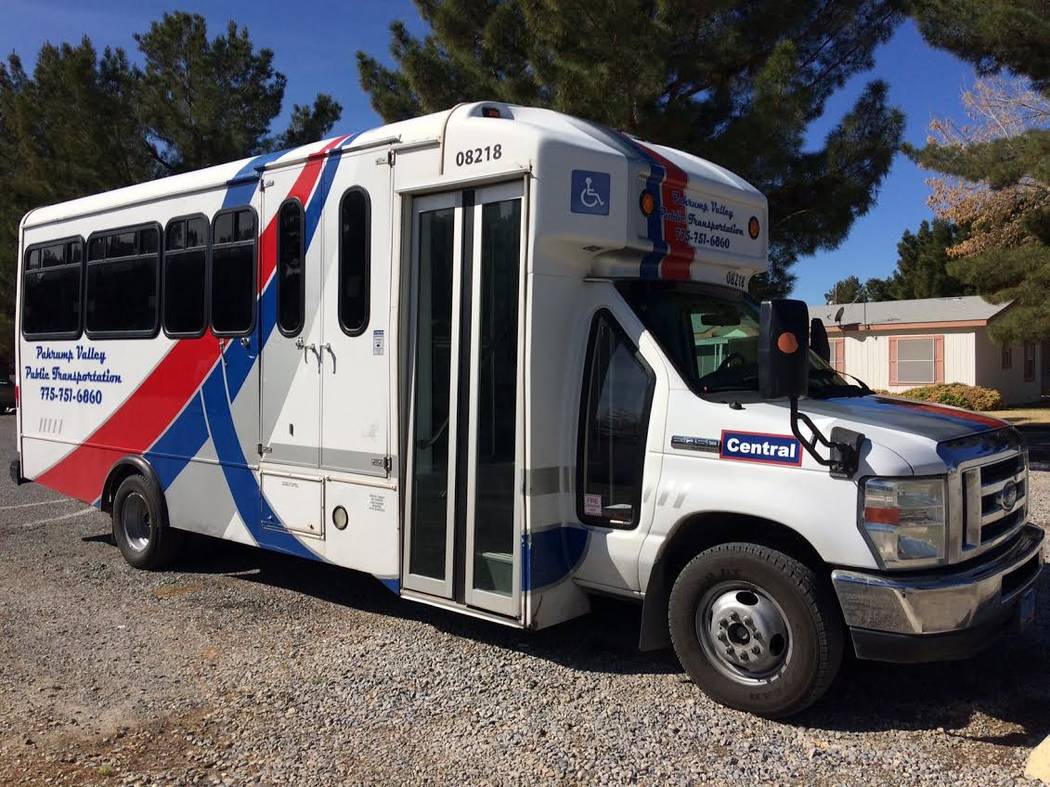 Robin Hebrock/Pahrump Valley Times The newest addition to the Pahrump Valley Public Transportation service is shown. This bus is dedicated to the central route while two others handle the northern and southern routes. 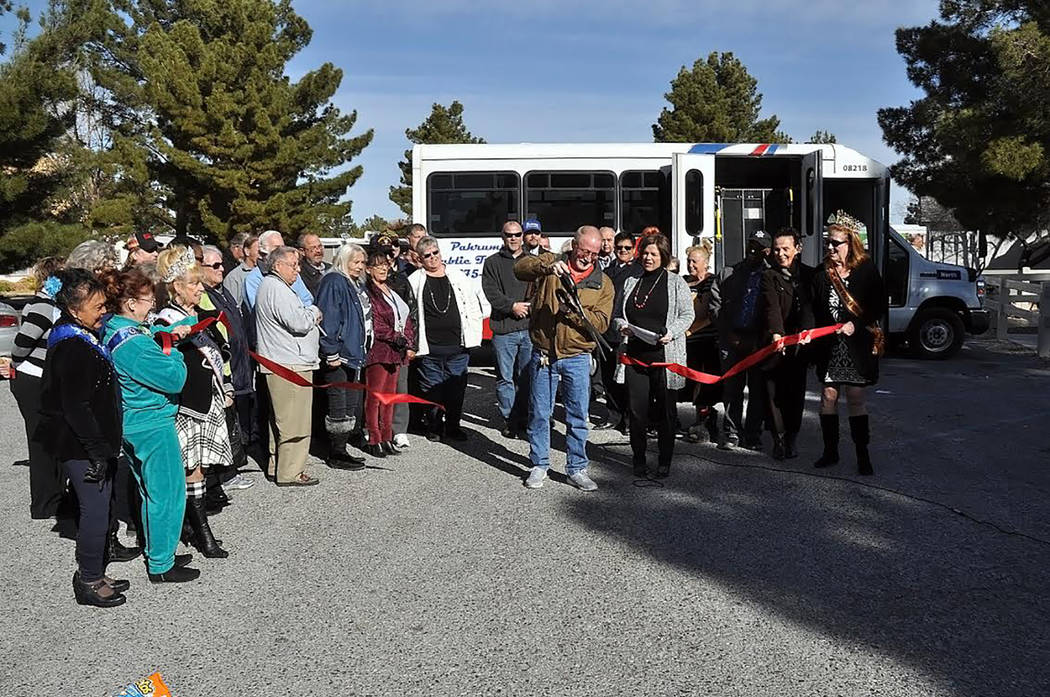 Horace Langford Jr./Pahrump Valley Times A large group of Pahrump residents gathered for the ribbon-cutting ceremony to celebrate the official hard launch of Pahrump Valley Public Transportation in late February, 2018. An anniversary celebration in honor of the transit system's first year of full service is set for March 2. 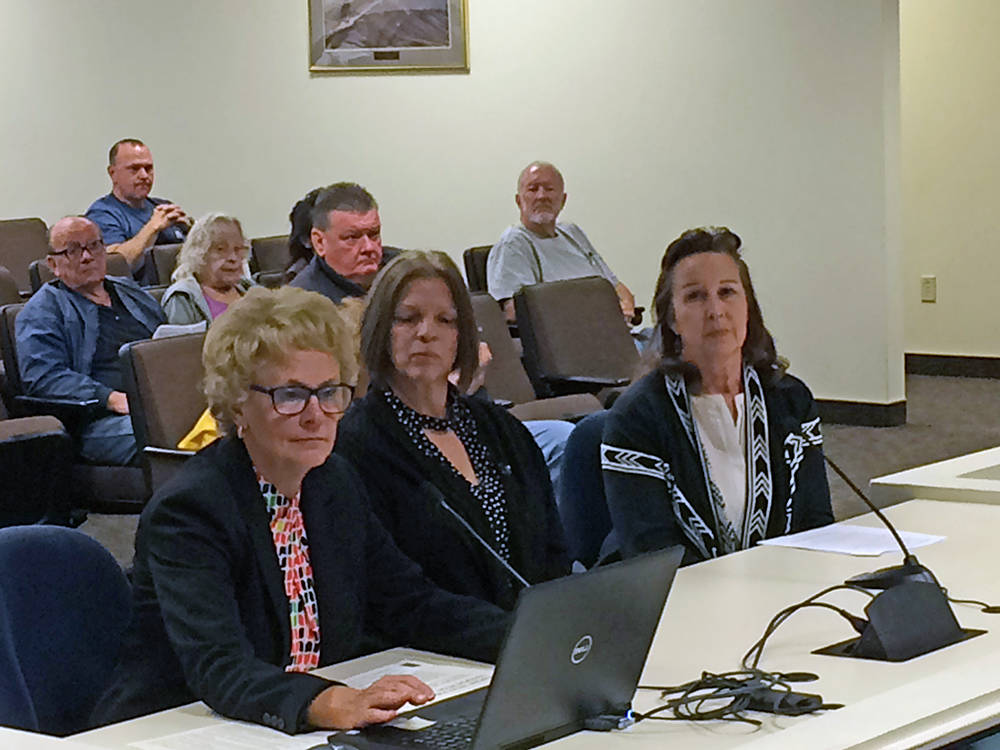 It has been almost one year since the launch of full operations for Pahrump Valley Public Transportation and organization officials presented an update on the transit service during the Nye County Commission’s latest meeting, detailing a thriving system that provided over 18,000 rides in just a 12-month period.

Pahrump Valley Public Transportation Committee member Michelle Caird took the wheel for the presentation. She explained that the update was specific to the one-year period of October 2017 to September 2018, which comprised the grant cycle for the Nevada Department of Transportation’s 5311 grant, which helps fund the system.

The service began with only buses and saw the start of full service for the entire community in late February 2018. As of today, the service has expanded to include four buses, two sedans, two mini-vans and two full-sized vans, with nine drivers, a dispatcher and a program manager providing the staffing. The anniversary of full operations is right around the corner, an excited Caird announced, with a celebration set for the first week of March.

“Public transportation has been a challenge in the Pahrump Valley for many years and the implementation and success of our program is due, totally, to various organizations. The Nye County commissioners go without saying, we appreciate all their support,” Caird stated, referencing financial contribution provided by the county and the Regional Transportation Commission, which helped secure grant funding.

The Pahrump Senior Center also played a huge role in the implementation of the service, as did the Nevada Department of Transportation and of course, the transportation committee itself. “We had various local agencies, organizations and businesses all there supporting us, because there is that true need for transportation here in our community,” Caird said.

For those who were unfamiliar with the service, Caird explained that it is a demand-response system in which riders schedule their trips in advance and the vehicles come directly to their door to pick them up. There are no limitations on the purpose for the rides, she added, with residents able to use the system for any of their needs.

“The transportation is not just for medical issues,” Caird emphasized, remarking that while medical may be a common reason to utilize the service, patrons also use it to travel for education and employment, for personal errands and events and much more. “It also helps those who are homebound, lets them get out of their house, which makes them better members of our community because they are able to participate in events… and so we are also addressing that need,” Caird stated.

The service is not just for within the boundaries of Pahrump, either, with Pahrump Valley Public Transportation vehicles providing rides into Las Vegas as well.

Fares vary depending on the rider, with standard fare $3 one way. Children 12 years old and younger can ride for $2 one way and must be accompanied by an adult. All students with Nye County school identification are also $2 one way, as are those with military identification. For riders 60 and older, it is suggested they pay $3 for one way. Rides to Las Vegas are $25 round trip. One-way rides to Las Vegas as also available with the same $25 fare amount.

“It’s easy to do and we are trying to get the word out. So many people still say they are surprised that we have public transportation,” Caird said. “As you can see, our fares are extremely reasonable. And the $3 suggested for riders 60 years and older is just that, though we will say that many people are very generous and will not only pay that amount but more, and we appreciate that.”

There are specific hours of service, Caird explained, with vehicles operating Monday through Friday from 7 a.m. to 4 p.m. and Saturday and Sunday from 8 a.m. to 2 p.m. As a demand-response bus service, patrons must schedule their in-town rides a week in advance and all trips to Las Vegas at least two weeks in advance. Trips can be scheduled up to two months prior to the ride.

“The number of miles driven in our 12-month period was a phenomenal 223,000,” Caird stated. “We actually had over 17,000 vehicle revenue hours. So you can see that the need is absolutely there and the limited number of people who know about it are making use of it.” The total number of rides provided from October 2017 to September 2018 came to 18,214.

With such an enormous amount of demand, the committee is hopeful to have those hours of operation expanded in the future. That all hinges on the system’s coffers, however. The service operates mainly on 5311 grant funding but donations are another vital factor in keeping the service strong. Donations are always welcome and more than appreciated, Caird said.

“There is a need in our community that has been demonstrated and our ability to fill that need, of course, is limited only by funding. As our funding increases, we hope to increase the number of vehicles and drivers, that way we can better serve the people of Pahrump and the surrounding area,” she concluded.

With the first anniversary of full operations just weeks away, Caird extended an invitation to the commissioners and the entire community, encouraging all to head out to celebrate the amazing success of the transportation service thus far.

“Come out Saturday, March 2 at our office, located right next to the library, 601 S. East Street from 1 to 4 p.m. We’ll have some vehicles there and our drivers and staff and so we are hoping that you will help us celebrate. It’s been long in coming.”