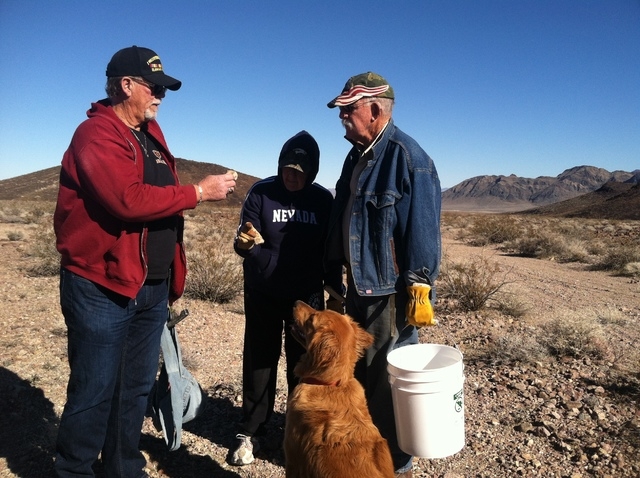 The southern Nevada desert is the perfect location to learn the stories of the earth. That story, some experts assert, continues for approximately 4.5 billion years.

According to Pahrump Valley Rockhound Vice-president Bill Wertz, the oldest, hottest and most unusual story is told succinctly by the landscape, and specifically, by the rocks in the desert hills.

The newly revived rock and gem hunting club consists of both hobby collectors and college-educated geologists. All members share their gem-seeking tips regardless of how the knowledge was acquired.

Wertz favors the naked geology of the desert which, he said, proclaims exposed evidence of the evolution of the earth on its surface. Viewable throughout the Great Basin, which housed an inland sea, are signs of significant geological events.

Visible evidence of one those events can be located while traveling in a westerly direction on Route 372 from Pahrump to California. Club president Dennis Twitchell cites a black strip of obsidian sandwiched in the desert hills which marks a fault line where the rock has been raised approximately 30-feet.

Landscape characteristics which suggest hidden gems are volcanic cones, Twitchell said. These dark pyramid-shaped features are a good indication of the previous presence of moisture, which is needed to help create treasures such as jasper, agate, quartz, turquoise, malachite and others “stones.”

People mistakenly think that water merely evaporates, Twitchell said. Though that is partly true, it also percolates, he said. It sinks into the ground, collides with heat and minerals and eventually hardens into pockets of mineralized rock.

Twitchell explains that there are thousands of minerals that exist in gemstone quality. Each gem is unique, and some would say “beautiful,” due to the way in which they have been contaminated.

Pure quartz is optically transparent, Wertz explained, but other minerals find their way to the quartz and cause it to turn brown, red, green, pink, orange or purple. Those colors signify smoky quartz, garnet, flourites, rose quartz, citrine and amethyst. Those contaminates also help to create different versions of agate, jasper, opal and turquoise.

Many club members turn their finds into jewelry after cutting and polishing. The club also owns stone shaping equipment, which it lends to members. Club treasurer Diana Crider described her interest in lapidary, or gem jewelry making, with a play on words. “I don’t stop to smell the roses, I stop to look at the rocks.”

Though not primarily sought, club members have also discovered gold. In contrast to gemstones, gold is a precious metal that exists in a pure, non-contaminated form. The United States currency system, Twitchell said, was based on the value attributed to the metal because it is malleable and can be shaped into any form. “It is a rare metal that is also soft and doesn’t corrode,” Twitchell explained.

The elemental nature of gold, Twitchell said, is also that of exploding stars.

Not everyone who hunts for rocks does so with an eye toward making jewelry. Wertz, a mature gentlemen, long retired, has developed such an interest in “rock-hounding” that he has begun to pursue a doctorate degree in geology. The purpose of his pursuit, he revealed is for nothing other than to acquire more knowledge.

The club organizes monthly field trips where members can look for “pretty rocks.” For more information about joining the Pahrump Valley Rockhounds, contact Wertz at 775-527-1494 or Twitchell at 801-920-8563; or attend a meeting held the second Tuesday of the month at 5:30 p.m. at the United Methodist Church 1300 Highway 372 in Pahrump.