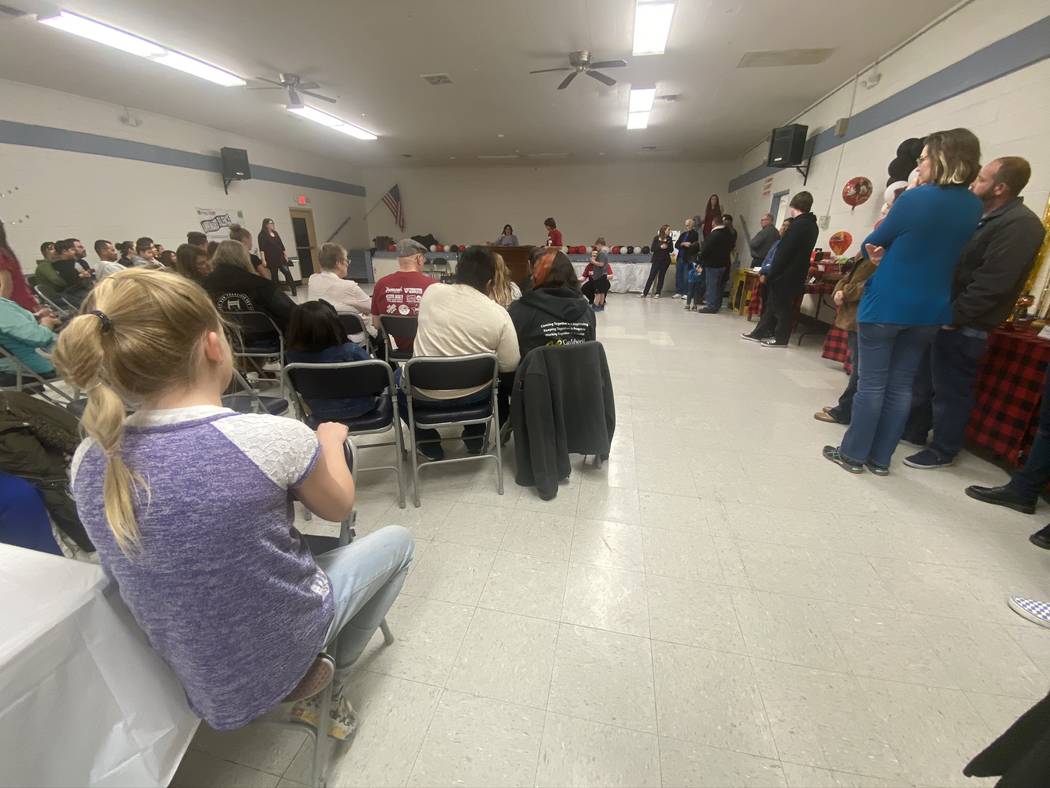 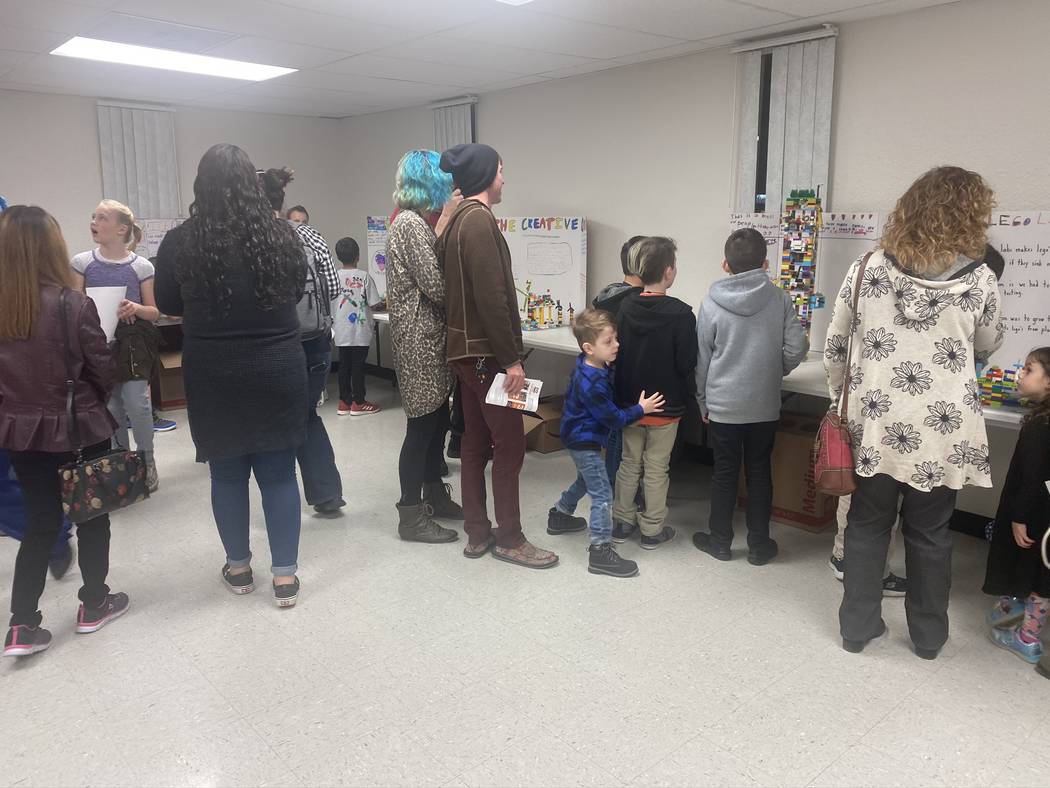 Jeffrey Meehan/Pahrump Valley Times The FIRST (For Inspiration and Recognition of Science and Technology) Lego League Jr. teams, which operate through the SAFE Elementary Program, were at an annual gala on Jan. 24. All the teams had a display of their work with robotics. 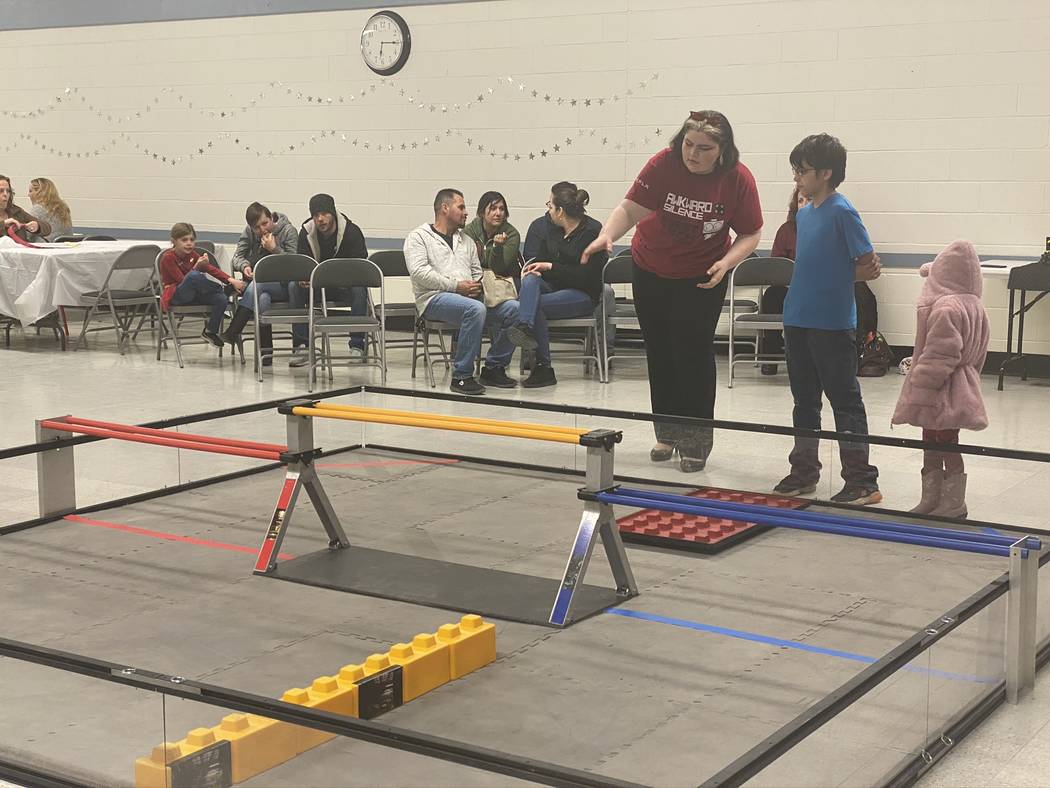 Jeffrey Meehan/Pahrump Valley Times An Awkward Silence team member explains how the competition works during an annual gala to raise funds for the team's trip to Sparks for a state championship. 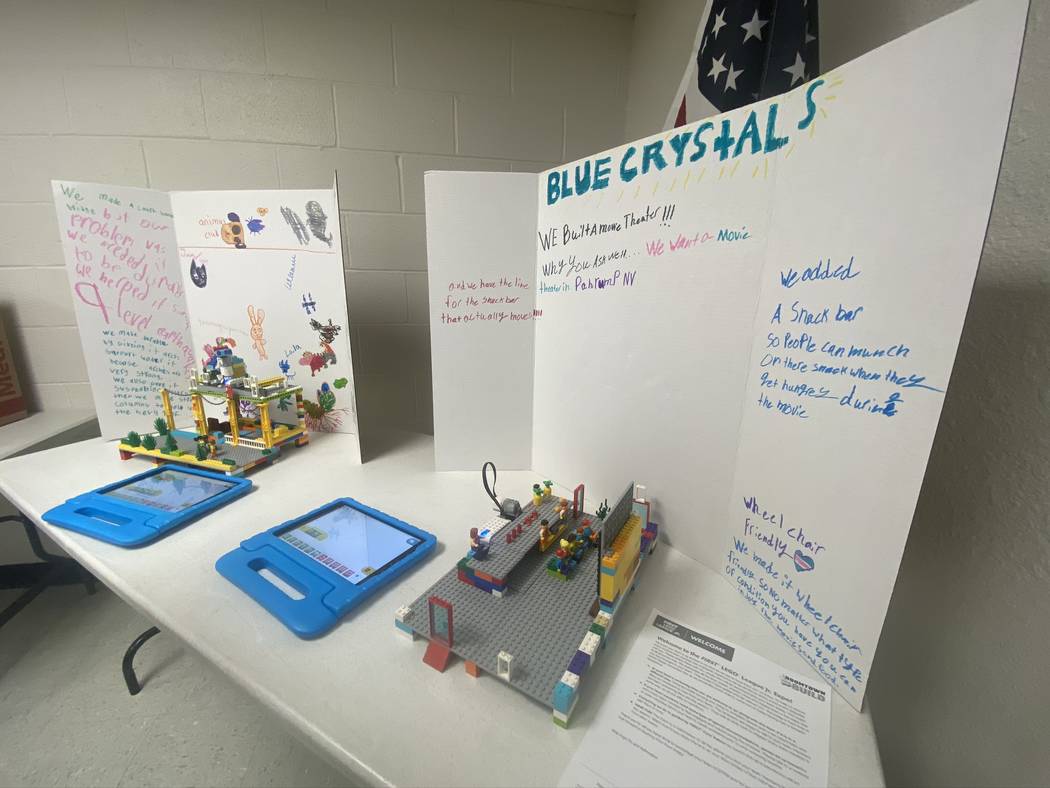 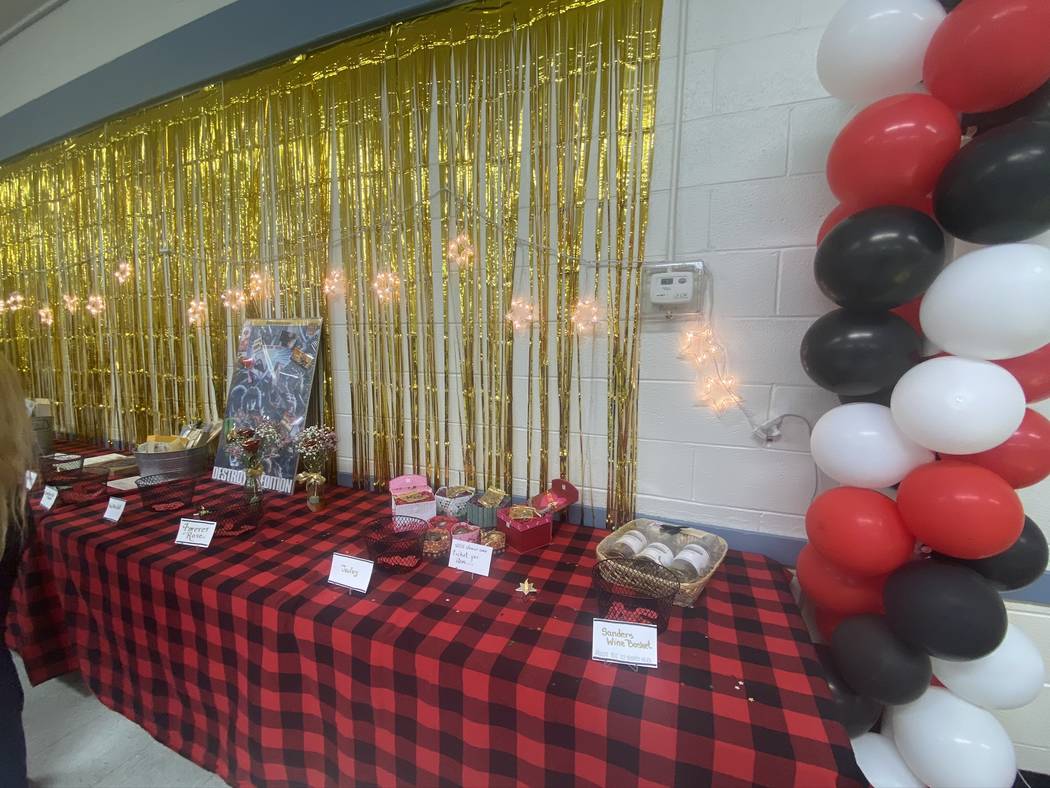 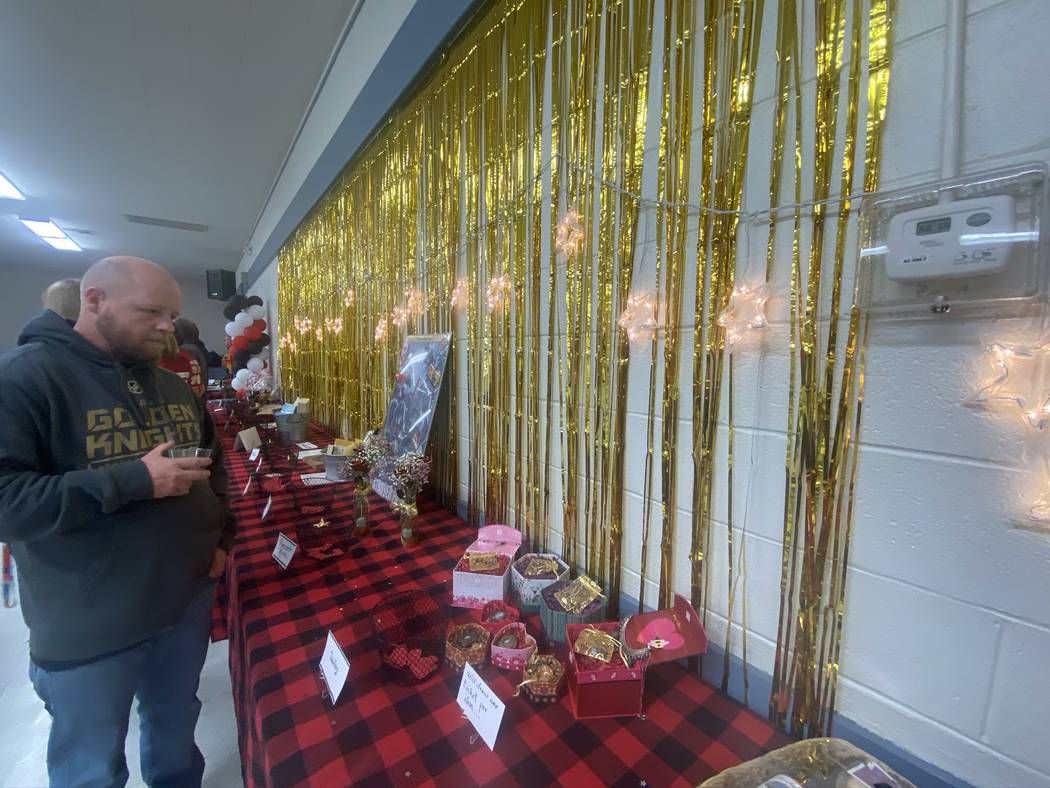 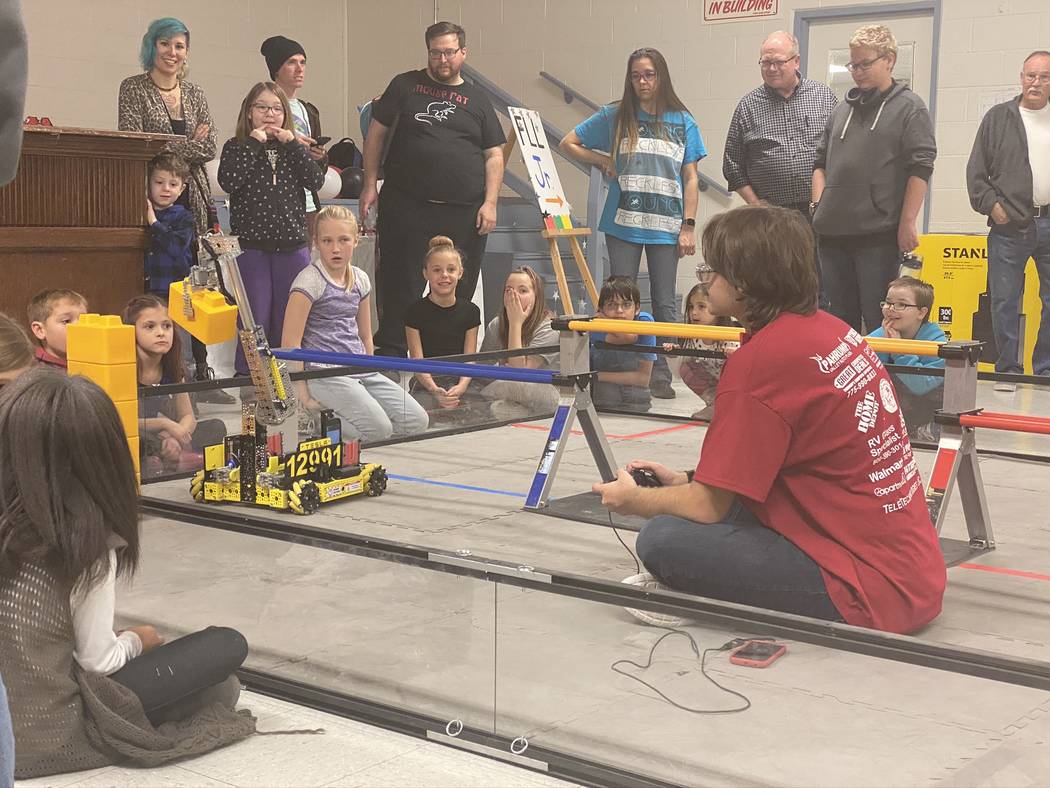 Jeffrey Meehan/Pahrump Valley Times Awkward Silence, a Pahrump Southern Nye County 4-H team, shows off its robot. The team is heading to Sparks for the state championships in February. 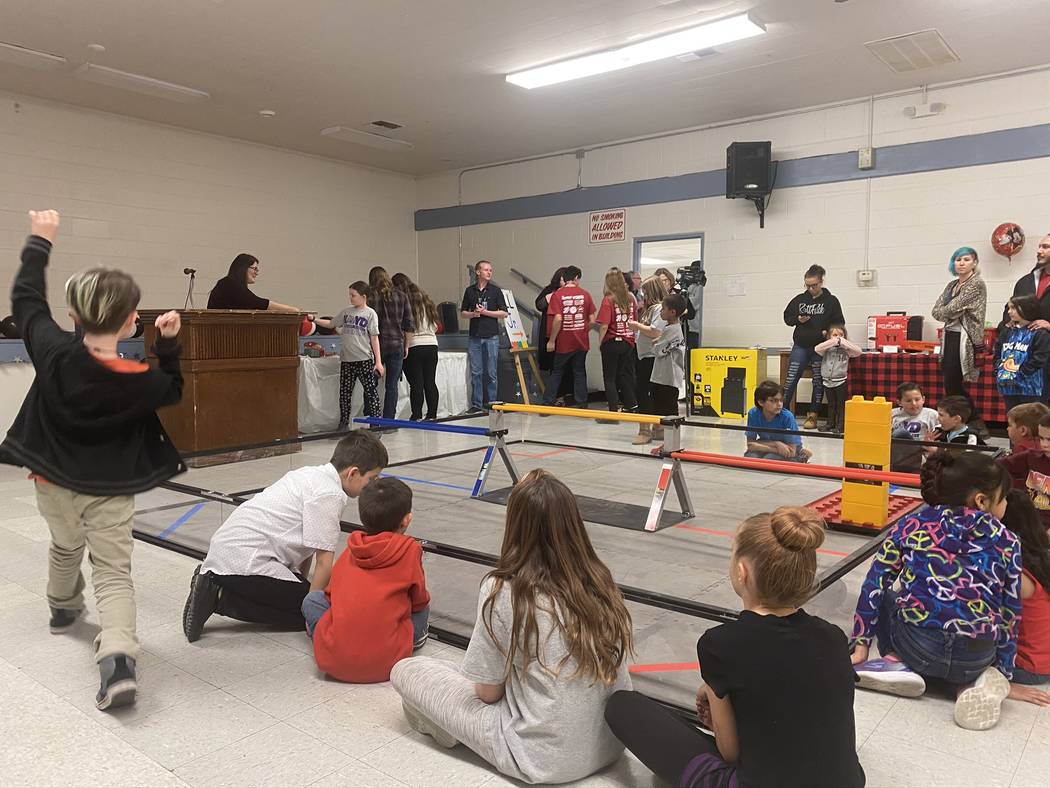 Jeffrey Meehan/Pahrump Valley Times Awkward Silence, a Pahrump Southern Nye County 4-H team, raised roughly $1,700 during an annual fundraiser in Pahrump. A raffle and a silent auction were part of the event. 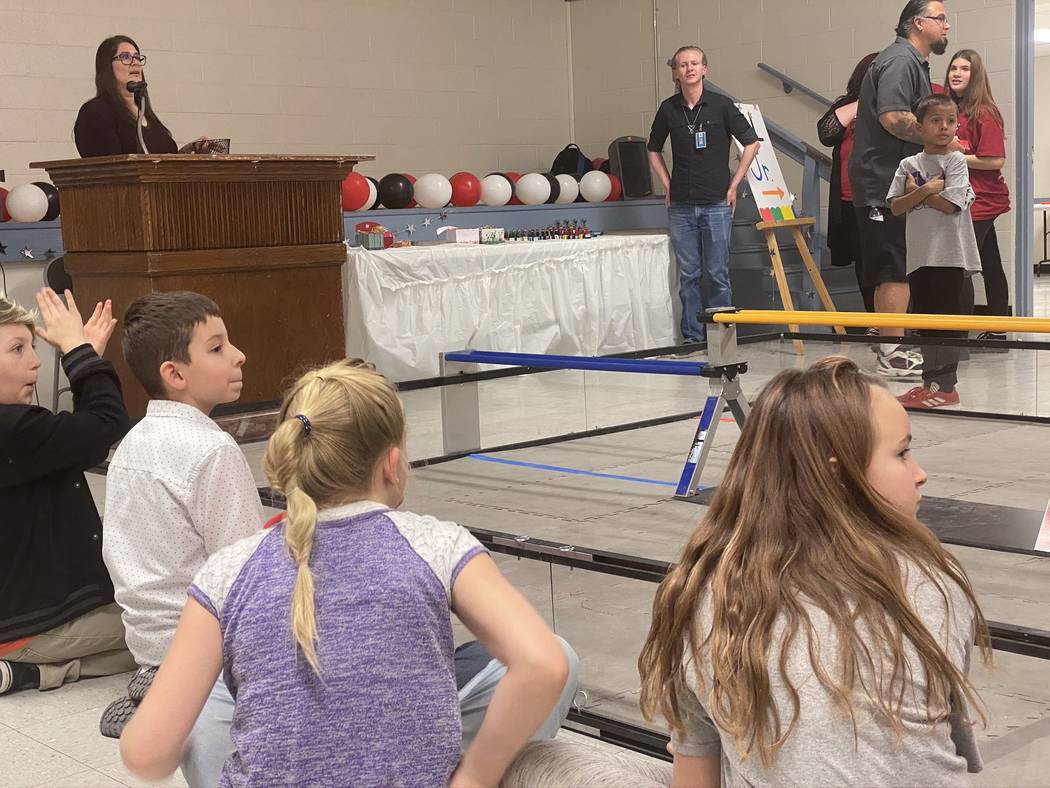 A Pahrump youth robotics team held its annual fundraiser to gain traction on needed resources for its upcoming trip to the state championships in Northern Nevada.

Awkward Silence, a Pahrump Southern Nye County 4-H robotics team, welcomed about 100 area residents, including board members of the Nye County Commission, and others, to the Bob Ruud Community Center in the early hours of its third annual gala, a fundraiser. The team is part of an annual competition under the FIRST (For Inspiration and Recognition of Science and Technology) Tech Challenge program.

“I just wanted to say thank you to everyone who came out and supported the 4-H robotics team,” said Jennifer Woeger-Riendeau, who coaches Awkward Silence with her husband, Jason Riendeau, on the night of the event, Jan. 24. “We had a really great event. We appreciate everybody that came and showed support.”

The event included a raffle and silent auction. Roughly two dozen items were donated for the team’s event.

Items up for grabs in the raffle included things like a Disney gift card, and a trip on Balloons over Pahrump for two. Additionally, there were four items for the team’s silent auction.

The team had a goal of reaching about $3,000, though they only raised roughly $1,700, according to Jason Riendeau.

The shortfall won’t preclude the team from going, though they are still looking to raise more funds.

“We probably won’t have enough time to do another fundraiser before state,” Jason said. “So, we’ll have to make it work with what we have.”

Awkward Silence has been doing well and will head to Sparks for the state championship later in February.

Also at the gala were FIRST (For Inspiration and Recognition of Science and Technology) Lego League Jr. teams, which operate through the SAFE Elementary Program. All of Pahrump’s elementary schools were involved in robotics in the 2019-20 school year.

Nye County Commission Chairman John Koenig supports the efforts of the Pahrump robotics team and 4-H across Nye County. 4-H got a boost in 2019 with the reinstatement of a tax rate, which went to support the University of Nevada Cooperative Extension.

According to a May 1, 2019 report in the Pahrump Valley Times, “The allocation of funding was approved at a rate of 2 cents per $100 of property valuation, to come from Nye County property taxes. This could total up to $312,000 per year in subsidy from the county.”

The report also stated, “It was stressed during the Nye County Commission’s April 16 meeting that the reinstated funding does not constitute a new tax. Rather, the monies for the cooperative extension will come out of the revenue from county property taxes received under the current tax rate.”

“Years ago when things were bad, we cut the funding,” Koenig said during the gala. “I wasn’t on the board then, but when they did it, I had a problem with it, because I’ve supported things like 4-H since I was a kid.”

Koenig said he grew up in Connecticut, where people there had horses, pigs and things like that. “And it’s a great thing for children growing up to do,” he said. “It gives them something to do. It’s safe. They learn a lot. I think they become better people as they get older.”

Koenig said he wasn’t happy with the funding being cut by the county.

“I wasn’t happy with it, but there was nothing I could do about it,” he said. “When I got elected, I talked to the other commissioners and said we have to get back to funding these people, so we did at a minimal level. I think it was last year we bumped it up to what they were asking for — plus, some more money on top of that. Right now, they’re well funded.”

Koenig also said that he’s looking to get financial support from the Nevada National Security Site, which he says gives funding to Clark County teams. Since the site is in Nye County, Koenig thinks the site should give assistance to Nye kids.

Nye County Commissioner Leo Blundo was also at the gala.

“This is my second year attending, and I love they let us test out the robots,” Blundo said. “What an opportunity it is for the kids in this community.”

Blundo was positive on the robotics programs that have risen over the last few years in Pahrump.

Blundo noted the reinstatement of the funding for the cooperative extension, “We just readjusted it, so we could fund for the person to be here, and the person for the county because we see the value. If we keep our kids in extracurricular activities like this, I know the kids aren’t on the streets. We’ve got to create opportunities. We’ve got to help be part of that success. I like seeing this.”

Nonprofit FIRST Nevada, an organization supporting several robotics competitions for youth in the state, is behind the FIRST Tech Challenge. Pahrump 4-H and multiple schools in the Nye County School District participate in the programs and competitions.

“We’re here to show off the creations that the kids have been working on” for the several weeks, said Cian Hauschen, STEM specialist for the SAFE elementary program. “We’ve been learning about engineering and everything they need to know to make what they’ve made.”

The Lego League Jr. program is for youth age six to 10.

For more information on Awkward Silence or to find out how to assist in their efforts, visit https://www.facebook.com/groups/2096287130595257/?ref=share