Special to the Pahrump Valley Times From right to left are Disabled American Veterans Chapter #15 Veterans Service Officers Steve Chase, Cathy Girard and Stephen Pitman with Nevada Governor Steve Sisolak. The three veterans, along with fellow service officer Bob Hammond, have been publicly recognized for their work in the local community. 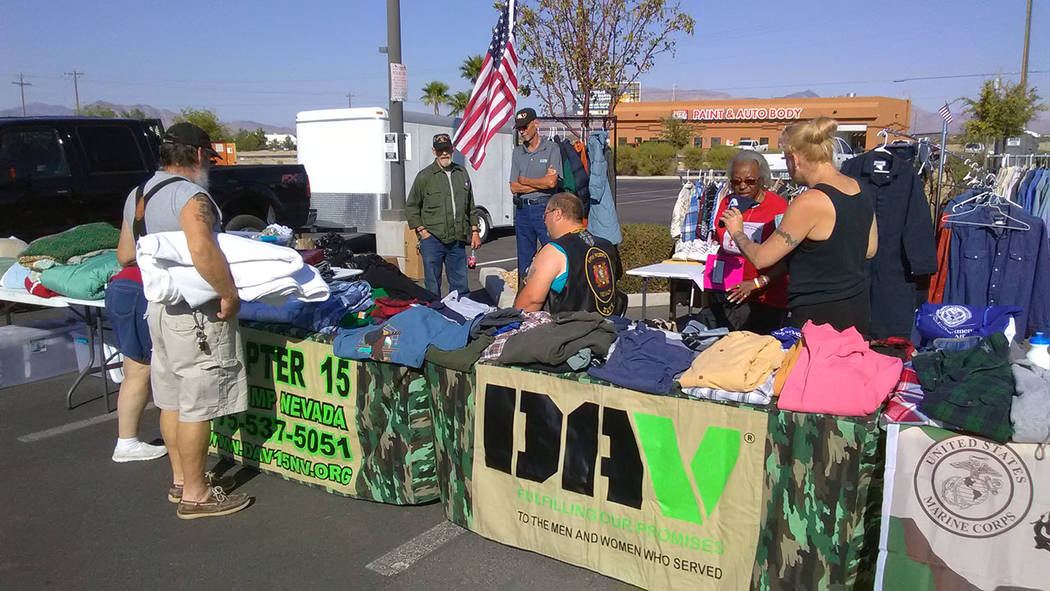 Selwyn Harris/Pahrump Valley Times file Pahrump’s Disabled American Veterans Chapter 15 has been a mainstay at the annual Pahrump Veterans Stand Down over the years.

Special to the Pahrump Valley Times Members of the Disabled American Veterans Chapter #15 pose with Nevada Governor Steve Sisolak during a ceremony in which the organization was presented with the Nevada Veteran Supporter of the Month Award.

What does service to the country mean?

Signing up and participating in military duty, certainly, but for many of those who have served in the U.S. armed forces, service doesn’t end when active duty comes to a close. Organizations all across the nation can name veterans among their ranks and these men and women continue to give of themselves to better the lives of others.

One such organization is the Disabled American Veterans Chapter #15 of Pahrump, which recently received a very prestigious honor, the Nevada Veteran Supporter of the Month Award, in recognition of the efforts of its four Veterans Service officers. These four exemplify the reality of a lifetime of service, both in the military and right at home in their own local communities by dedicating their time and energy to helping other veterans secure the benefits they have earned.

On Monday, Nov. 4 three of the Veterans Service officers and other representatives of the local DAV Chapter #15 took a trip to Las Vegas to attend the presentation ceremony, with Nevada Governor Steve Sisolak and representatives for U.S. Sens. Catherine Cortez Masto and Jackie Rosen as well as U.S. Reps. Steven Horsford and Dina Titus all present to thank the organization and its members.

The Veteran Supporter of the Month Award was given to the DAV specifically for the volunteer work performed by Chapter #15 Veteran Service Officers Bob Hammond, Steve Chase, Cathy Girard and Stephen Pitman.

Together, the four help operate the DAV’s Service Officer Office inside the main lobby of Desert View Hospital, a space that the hospital has allows the organization to use at no cost. Through its program, the DAV helps service members in not only Pahrump but in Beatty, Amargosa and Tonopah as well. Surviving spouses can also receive assistance at the service office and the service officers also regularly answer questions from residents seeking information on how to help veterans in their families as well as their veteran friends and neighbors.

Nye County has become a financial bolster for the DAV’s service office, providing the funding that keeps the DAV’s program going strong. At the Nye County commission’s June 18 meeting this year, the DAV made a request for another round of funding in the amount of $4,000, which met with unanimous approval.

At that meeting, it was reported that throughout the preceding year, DAV Veteran Service officers met with nearly 1,200 veterans and had processed in excess of 350 claims, helping to infuse millions of dollars annually into Nye County while simultaneously bettering the lives of those veterans.

“I was honored as the commander of Chapter #15 to be present for the award the service officers received,” DAV Chapter #15 Commander Greg Cardarelli told the Pahrump Valley Times following the ceremony. “Their efforts to assist veterans with their claims has gone above and beyond the call of duty. The monetary claims exceeded over $3 million.”

The Veteran Supporter of the Month Award saw its start as an off-shoot of the Nevada Department of Veterans Services’ Veteran of the Month Award, expanding the program, “… by shining a bright on individuals who, while not serving in uniform, help veterans with no expectation of recognition or award,” the department’s website details. “It also serves to recognize the contributions of organizations who donate their time and energy to improve the life of our veterans.”

The award is presented to both active organizations and non-veteran Nevada community members who provide exceptional support to military stationed in Nevada, Nevada veterans and their families, the website states. Anyone can submit a nomination for the award, with applications reviewed on a quarterly basis by the Nevada Veteran Service Commission.

Applications can be found online at www.veterans.nv.gov and can be submitted by mail to Nevada Department of Veterans Services, Attn: David Johnson, 6630 S. McCarran Blvd. Building C, Suite 204, Reno, Nevada, 89509 or via email at johnsond@veterans.nv.gov