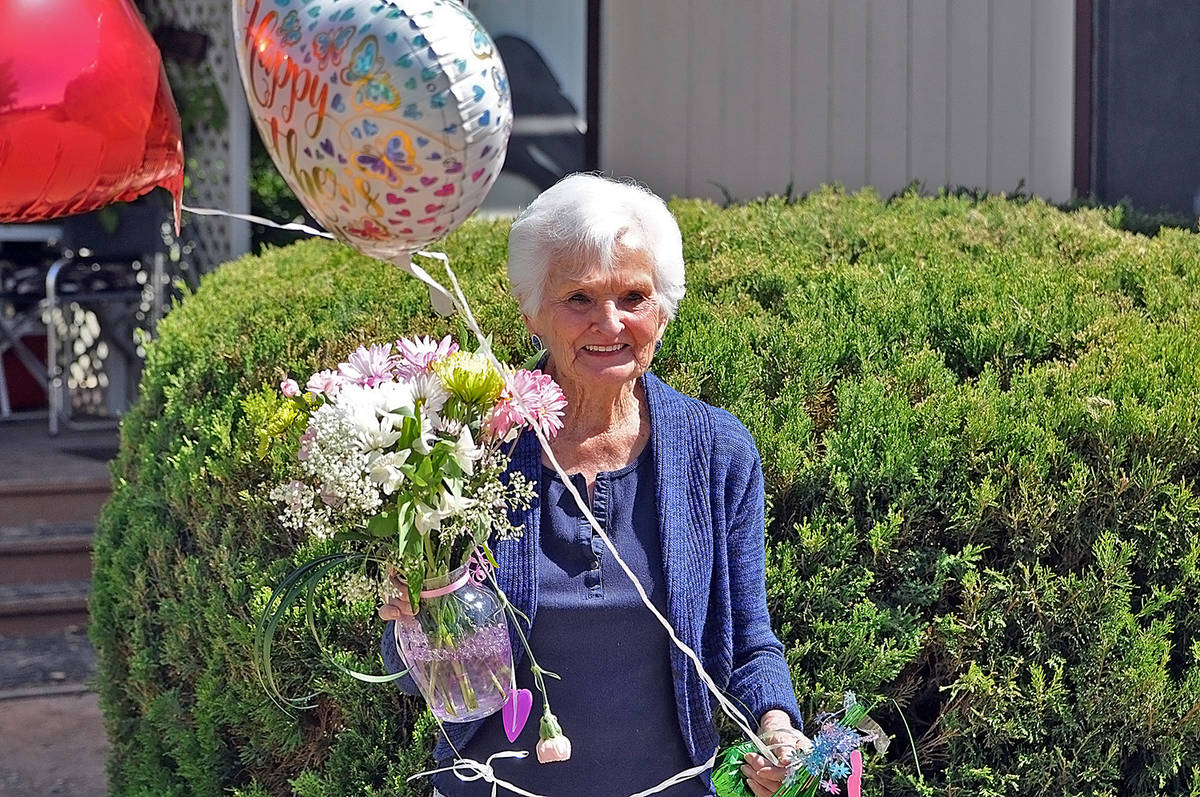 Horace Langford Jr./Pahrump Valley Times Ms. Senior Golden Years Pageant founder BJ Hetrick-Irwin was surprised by this year's contestants, who visited her house with balloons, flowers and signs to show their dedication to continuing in the 2020 pageant, even though it must be postponed. 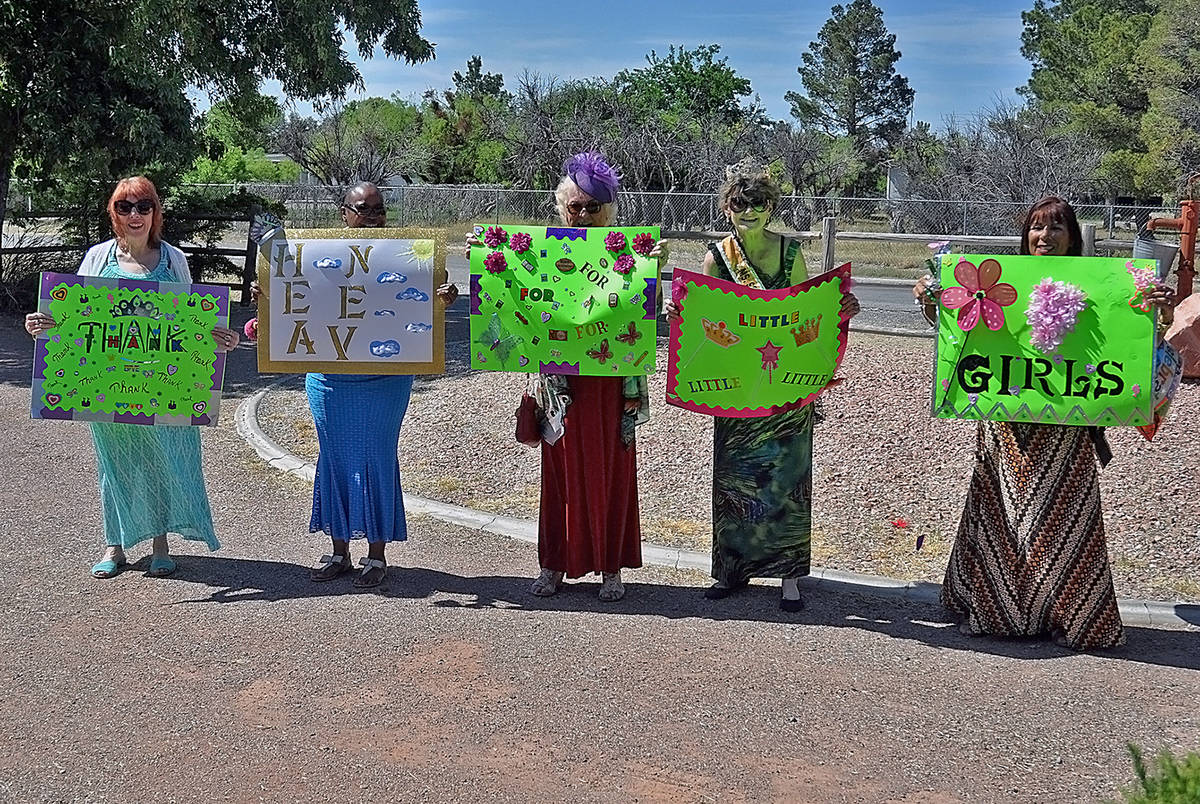 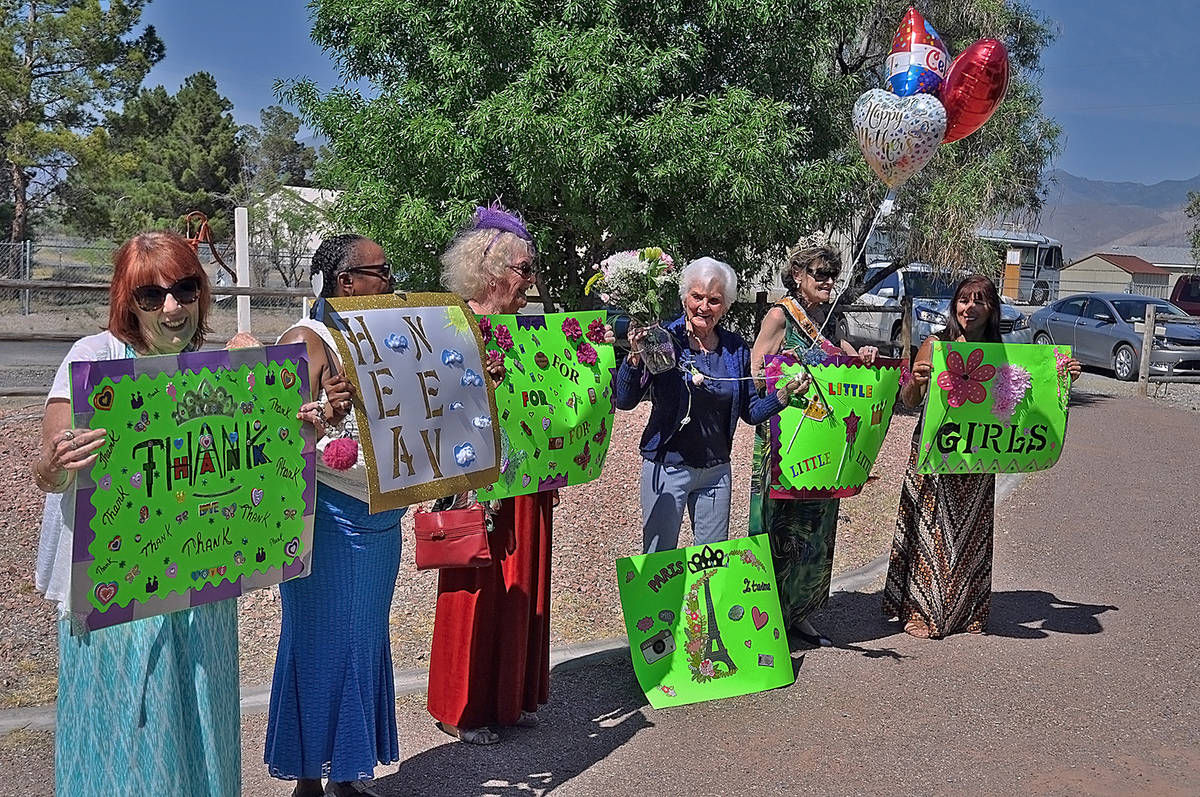 Horace Langford Jr./Pahrump Valley Times BJ Hetrick-Irwin was surprised and delighted with a visit from three of the contestants for the 2020 Ms. Senior Golden Years pageant and two of last year's pageant contestants, who dropped by her house on May 9 to show that they were just as dedicated as ever to holding this year's postponed pageant as soon as they can.

The 2020 Ms. Senior Golden Years Pageant was supposed to take place in just a few short weeks, originally planned for June 6 but the COVID-19 crisis and mandates from the governor to avoid gatherings of more than 10 people has thrown a bit of a wrench in those plans.

Despite the necessary delay in preparations, enthusiasm for the pageant is still running high and the contestants were very excited to be able to show their dedication to ensuring that the show will go on.

2019 Ms. Senior Golden Years Queen Laraine Babbitt, 2019 second runner-up Penny Beccia and three of this year’s pageant contestants made the visit to Hetrick-Irwin’s on Saturday, May 9, outfitted with balloons, flowers and homemade signs that they proudly presented to a delighted and astonished Hetrick-Irwin, inspiring a beaming smile and even a few tears of joy from the nearly 95-years-young pageant leader.

Smith, Bolton and Hallam were all on site for the May 9 surprise and Donegan and West, both of whom had prior appointments and could not attend, were very glad to hear of the surprise that was in store for Hetrick-Irwin.

Babbitt said Hetrick-Irwin was expecting her that afternoon, as Babbitt had told her she would be coming by to drop off some cake and balloons for Mother’s Day, but the addition of the contestants was a complete shock, and quite a happy one.

“This was all about the contestants, all about the ladies who will be in the pageant this year, just to have them show BJ that they are in it, they are very much still involved and committed. BJ had said she hoped the contestants wouldn’t give up on her and I had told her no, that wasn’t going to happen, and this just really reaffirmed that,” Babbitt told the Pahrump Valley Times.

“My son, Michael Spandoni, went to the door and we had flowers and balloons for her, as well as the music ‘Thank Heaven for Little Girls’ which is the theme for this year’s pageant, playing,” Babbitt detailed with obvious enthusiasm. “She came outside and each of the ladies had made a sign with one of the words from the song title. BJ was reading it and then we lowered them so she could see it was the contestants behind them and I think she was really surprised.”

For a woman who has been accustomed to a very busy lifestyle and constant interaction with the many members of her two organizations, the Nevada Silver Tappers and Ms. Senior Golden Years, the isolation prompted by COVID-19 has been extremely difficult for Hetrick-Irwin. On top of the lack of socialization, Hetrick-Irwin was also hit with an illness not long after the state shut down and had been battling that for weeks, feeling herself get a little more morose with each passing day. That’s one reason the surprise on Saturday was so special for her.

“It was wonderful! They had three of my contestants there, I was so happy to see them. They are so gung-ho to keep going so I have to get it moving here pretty soon!” Hetrick-Irwin gushed, remarking that she was incredibly surprised and touched by the gesture.

“It was so beautiful, they were all so excited. And I will tell you, the girls have been wonderful to me because I was getting very depressed and it didn’t seem like I was responding to my illness like I should but you know, they gave me the biggest lift in the world and I told myself, ‘Okay, BJ, get over the pity party,’ and then I started fighting it and now I am pretty near back to myself.”

Hetrick-Irwin added that though the June 6 pageant date had to be canceled, the ladies were going to be working hard to get the pageant put together for a future date. She declared, “Even though we might have to have it in August or September, who cares? Whenever we can get it done, we’ll get it done!”

Details on the 2020 Ms. Senior Golden Years Pageant will be included in a future edition of the Pahrump Valley Times, once a new date can be secured.