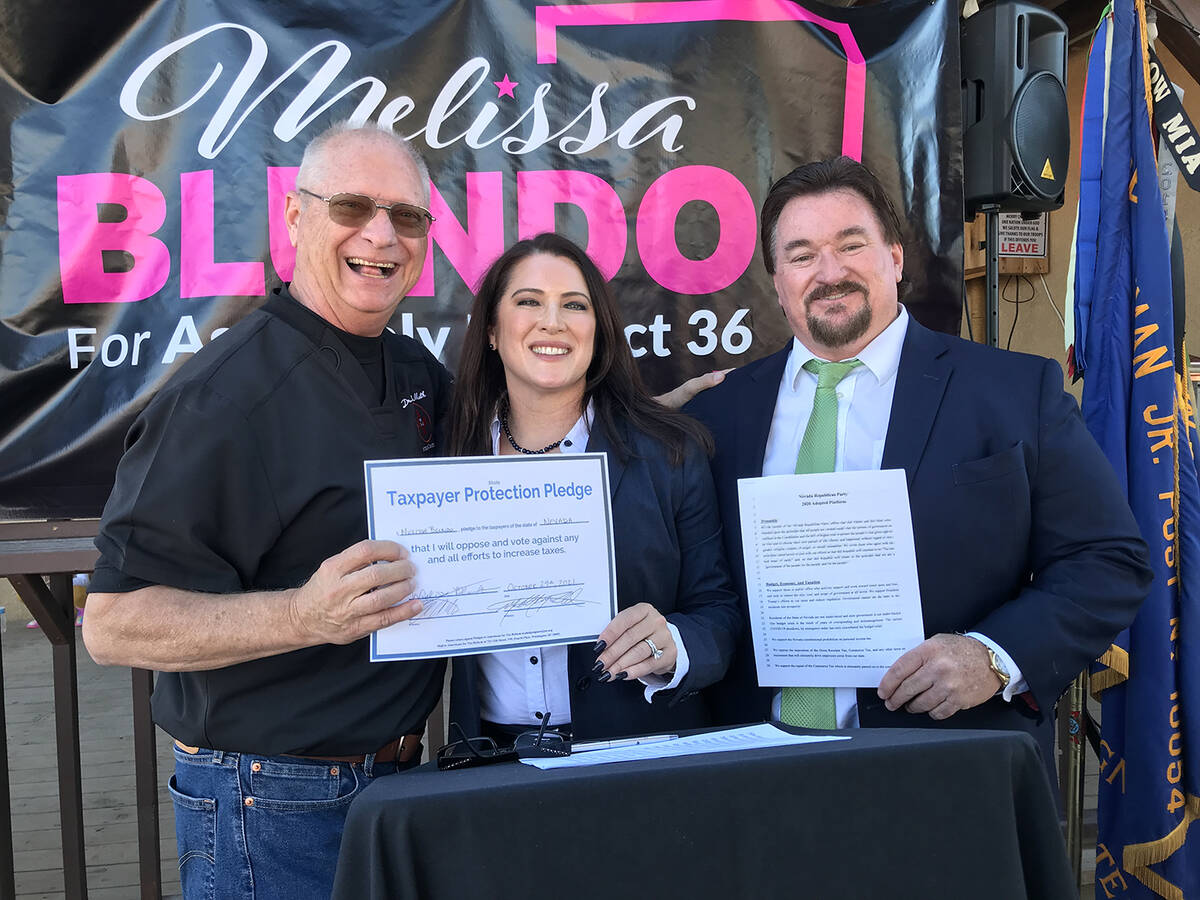 Robin Hebrock/Pahrump Valley Times Melissa Blundo, at center, stands with Chuck Muth, left, and Nevada GOP Chair Michael McDonald, right, at her announcement event in which she publicly proclaimed her intention to run for the Republican nomination for the Nevada Assembly District 36 seat in the 2022 primary. 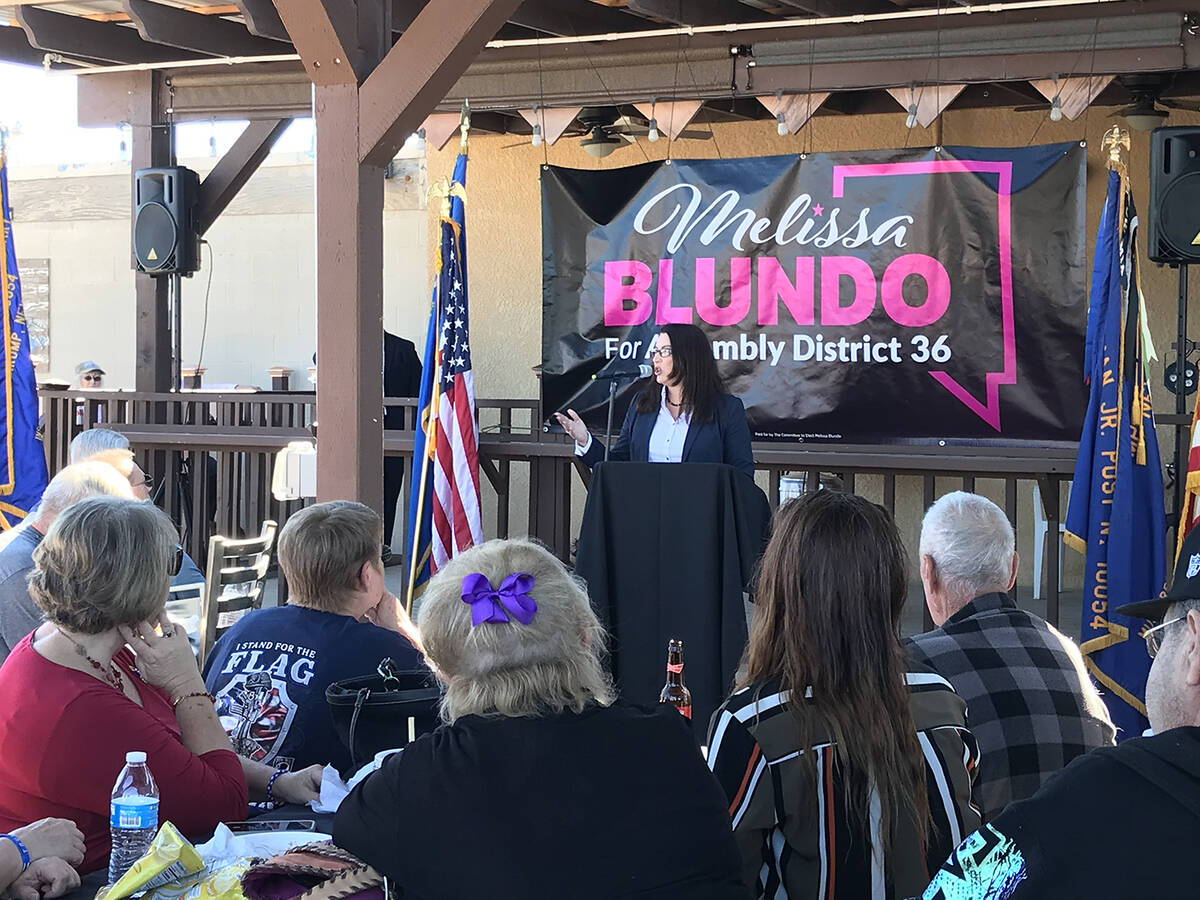 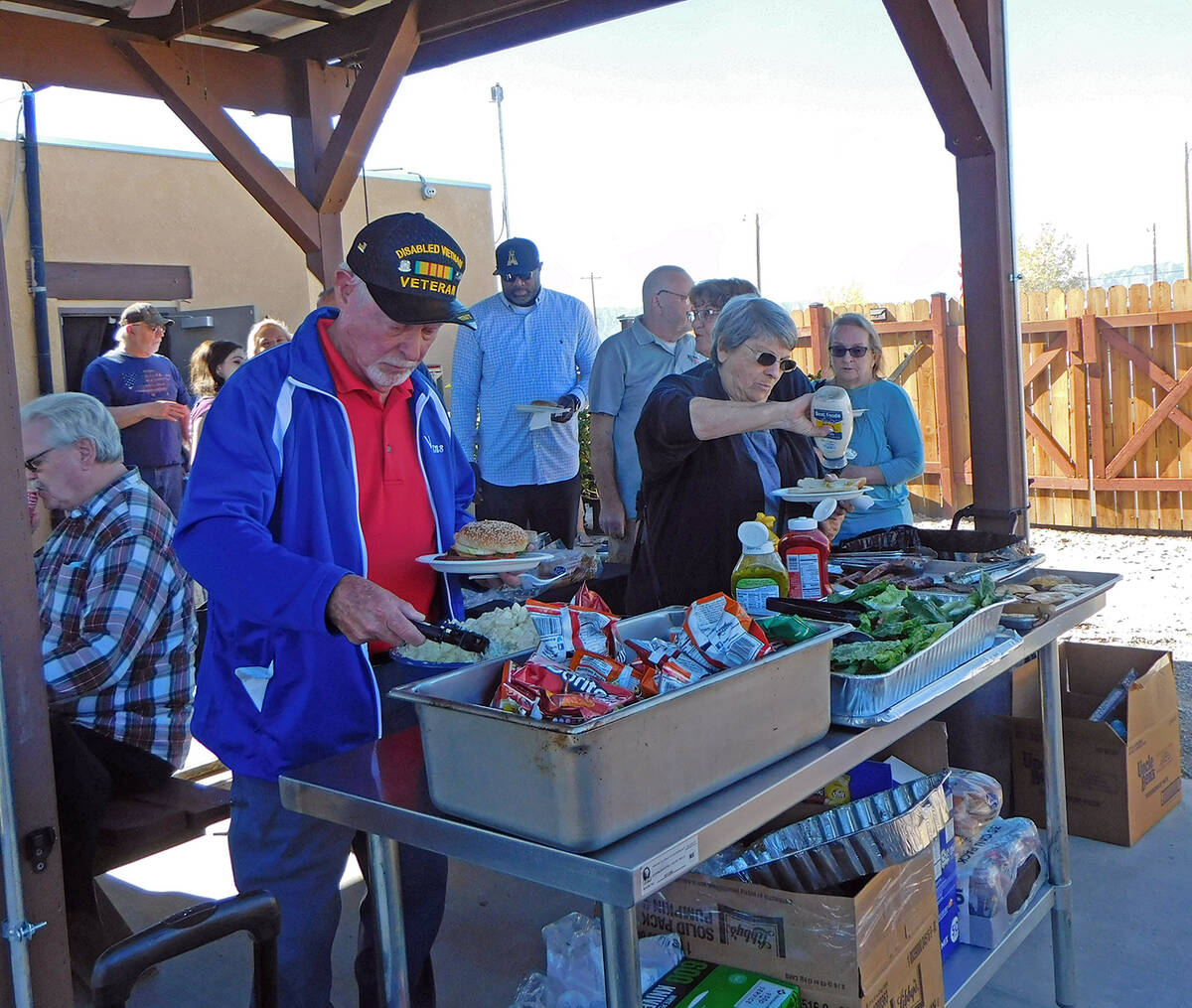 The 2022 election picture is getting clearer as the end of 2021 approaches, with candidates declaring for a variety of offices and hosting their official campaign kickoffs, including Pahrump resident Melissa Blundo, who announced this past weekend that she intends to seek the Nevada Assembly District 36 seat in the coming year.

Hosted Friday, Oct. 29 at the Veterans of Foreign Wars Post #10054, Blundo’s announcement event drew a sizable crowd that afternoon, with an estimated 134 people in attendance to learn just which office she was going to make a bid for.

Also out to support Blundo at the event were two big names in the Republican world, Chuck Muth, writer of “Muth’s Truths” and campaign manager for Dennis Hof, who successfully won the 2018 Assembly race despite having passed away three weeks prior to election, as well as Nevada Republican Party Chair Michael McDonald, both of whom made it obvious that they were delighted to be backing Blundo this time around.

Blundo herself then took to the podium and she had a few choice words regarding her opponent, incumbent Republican Assemblyman Greg Hafen II, as well as Governor Steve Sisolak.

“How many of you, like me, are ready for an end to the 591 days to flatten the curve and state of emergency in Nevada?” Blundo queried to applause. “I think we can all agree Gov. Sisolak should be nominated as Nevada’s Californian of the Year.”

She slammed the governor’s many mandates throughout the last year and a half and touched on her own efforts to defend the people from what she feels is obvious government overreach, helping to found No Mask Nevada PAC.

“Government has no place in people’s health care choices,” Blundo asserted. “To be clear, I’ve never been against masks or vaccines. I’ve been staunchly against mandates. In this country, we’ve always had discussions before we’ve had decisions. That’s freedom, folks. The past 18 months, we’ve had decisions with no discussion. That’s tyranny.”

Turning to her opponent, Blundo then posed a couple of pointed questions, asking the crowd, “Where was our current assemblyman when the people’s house (Nevada Legislative Building) was shut down? Was he raising hell fighting for us to be let in? Where was he when masks and vaccine passports were being required to enter the legislative building? Or our local county commission chambers for that matter? While I was standing up and fighting for us, getting thrown out of a meeting for refusing to comply, he was wearing his mask and going along with the governor’s mandates.”

As part of her announcement event, Blundo also put pen to paper to make her stances official, signing both the Taxpayer Protection Pledge and the Republican Party platform as her supporters looked on, cheering as they watched. After the formal speech portion of the event concluded, she then headed into the throng to mingle with attendees and discuss her goals should she prevail in the 2022 primary.

“The announcement event was a huge success,” Blundo told the Pahrump Valley Times after it was all over. “Having military family, my grandfathers having both served in World War II and one of them having a dorm named after him at Tinker Air Force Base in Oklahoma, my dad having served in Vietnam, my uncles serving in the Air Force, cousins who were just recently promoted to colonel, I really wanted to honor them. So I chose the VFW as the venue for my announcement and it was a huge turnout. I believe we did them justice and celebrated Nevada Day as well.

“As a citizen activist, I have always advocated for the people,” Blundo continued. “The Legislature does a lot for the people and business owners. Owning a business, a restaurant, I wanted to step up and show people that one person can make a difference. At the state level, we make laws that affect businesses on so many levels. That’s why I chose the Assembly. And I want to focus on reining in the governor’s emergency powers and repealing the commerce tax. We had AB46 this last session, to repeal the Commerce Tax, and that came right out of Nye County. Unfortunately, our current assemblyman never even mentioned it, let alone demanded a hearing.”

Voters interested in learning more about her bid for office can visit www.MelissaBlundo.com