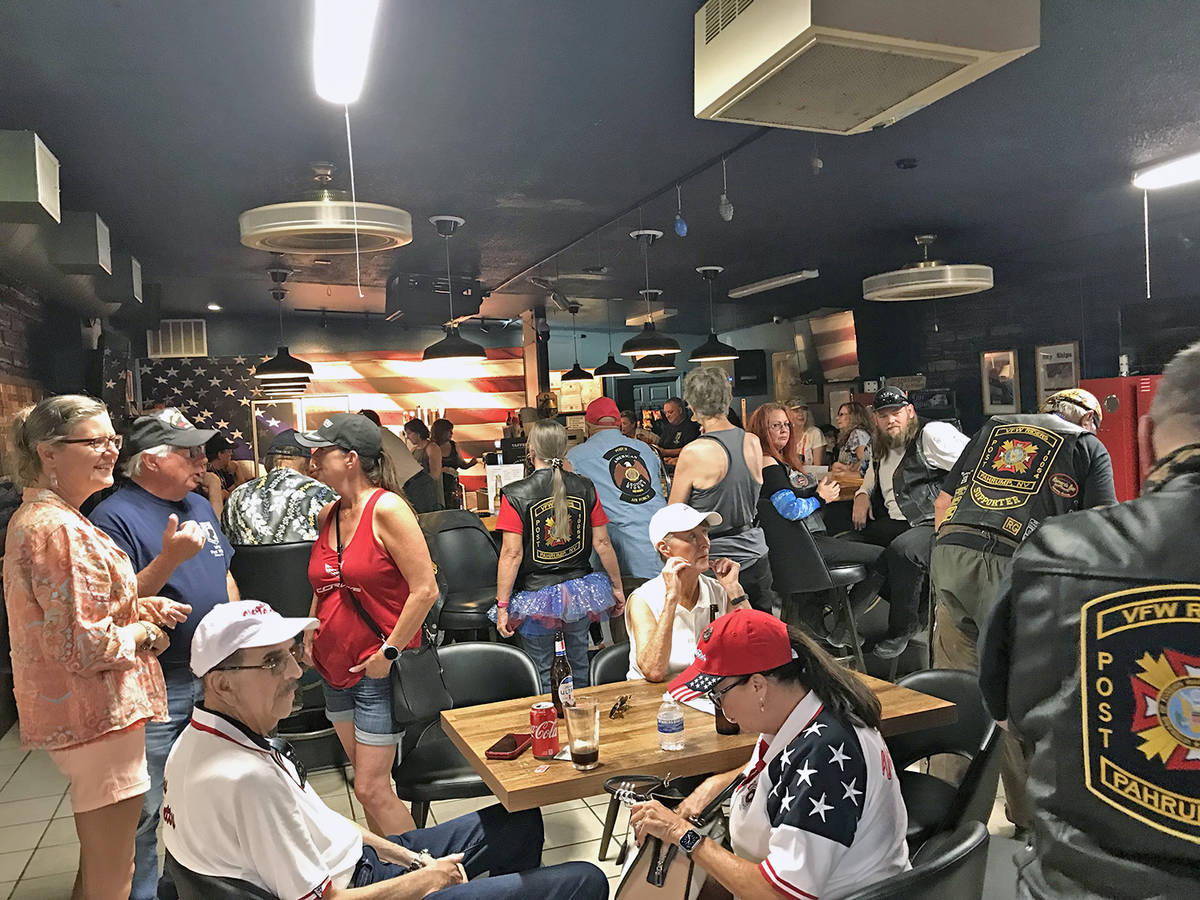 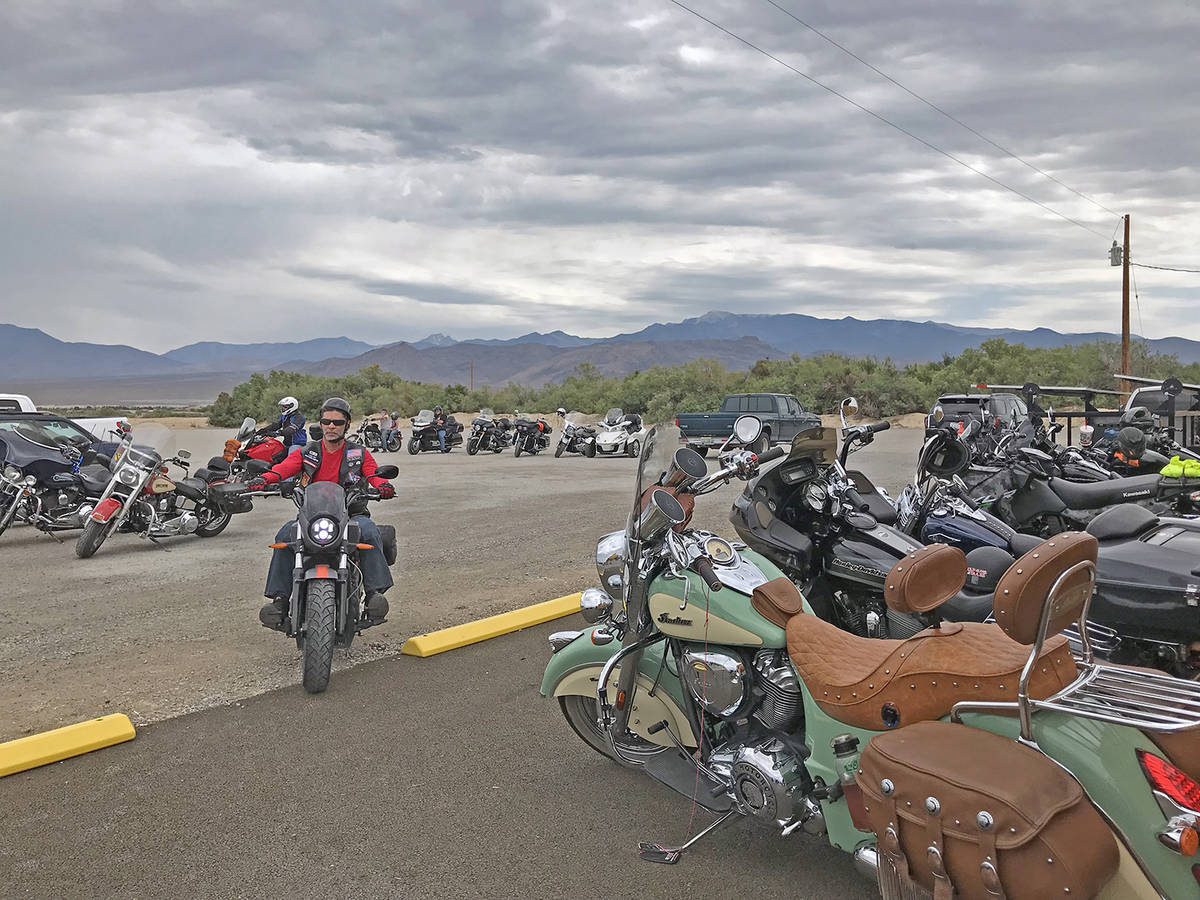 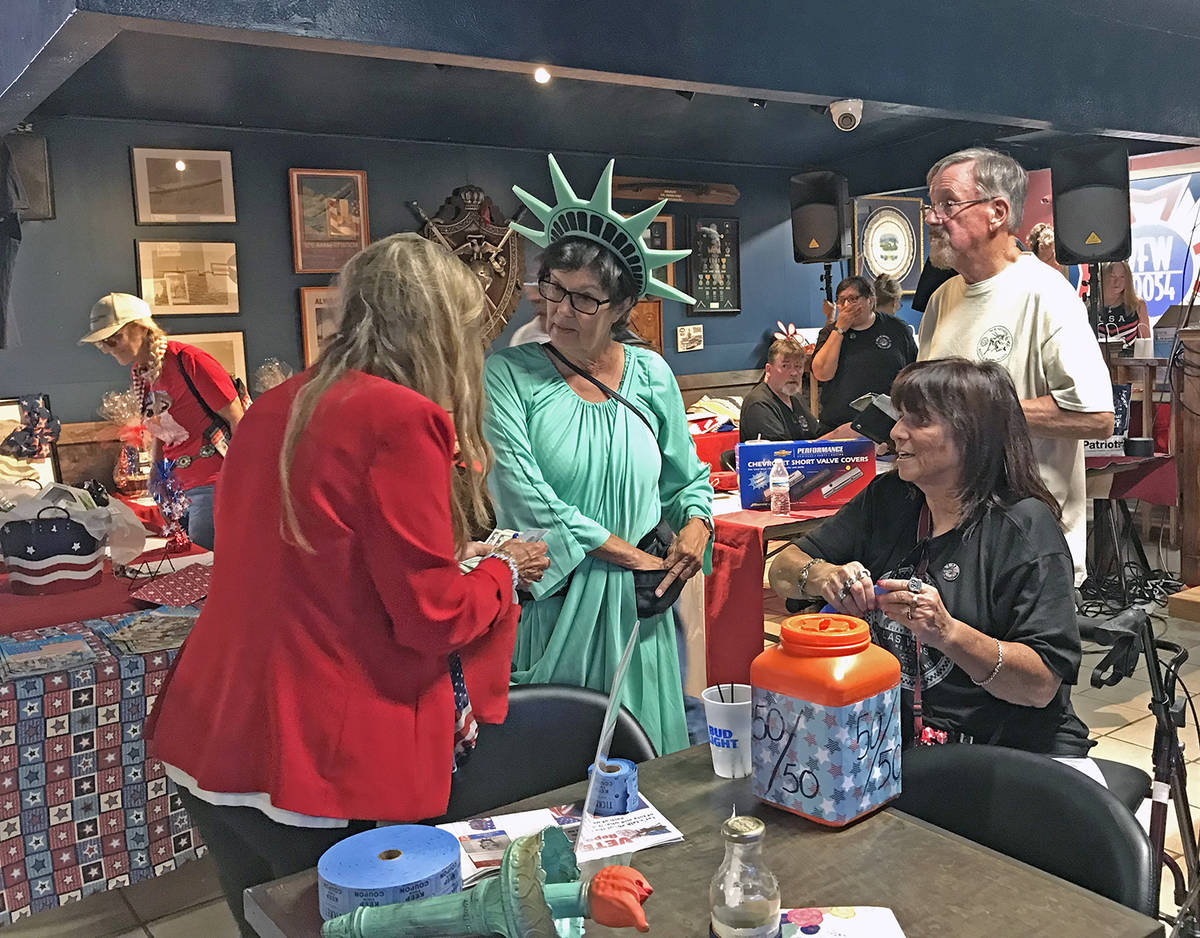 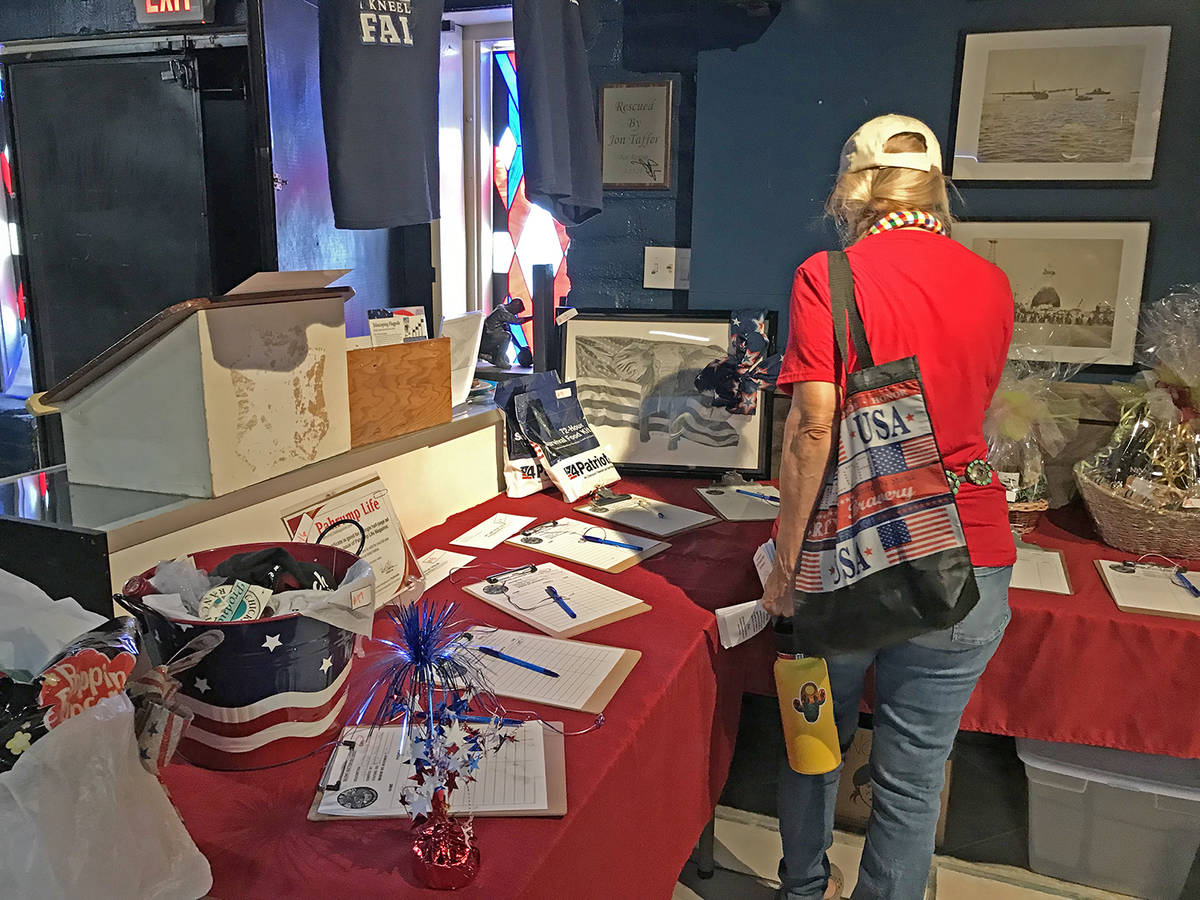 Robin Hebrock/Pahrump Valley Times There were all sorts of silent auction items for people to bid on during the Ride 4 Liberty event. 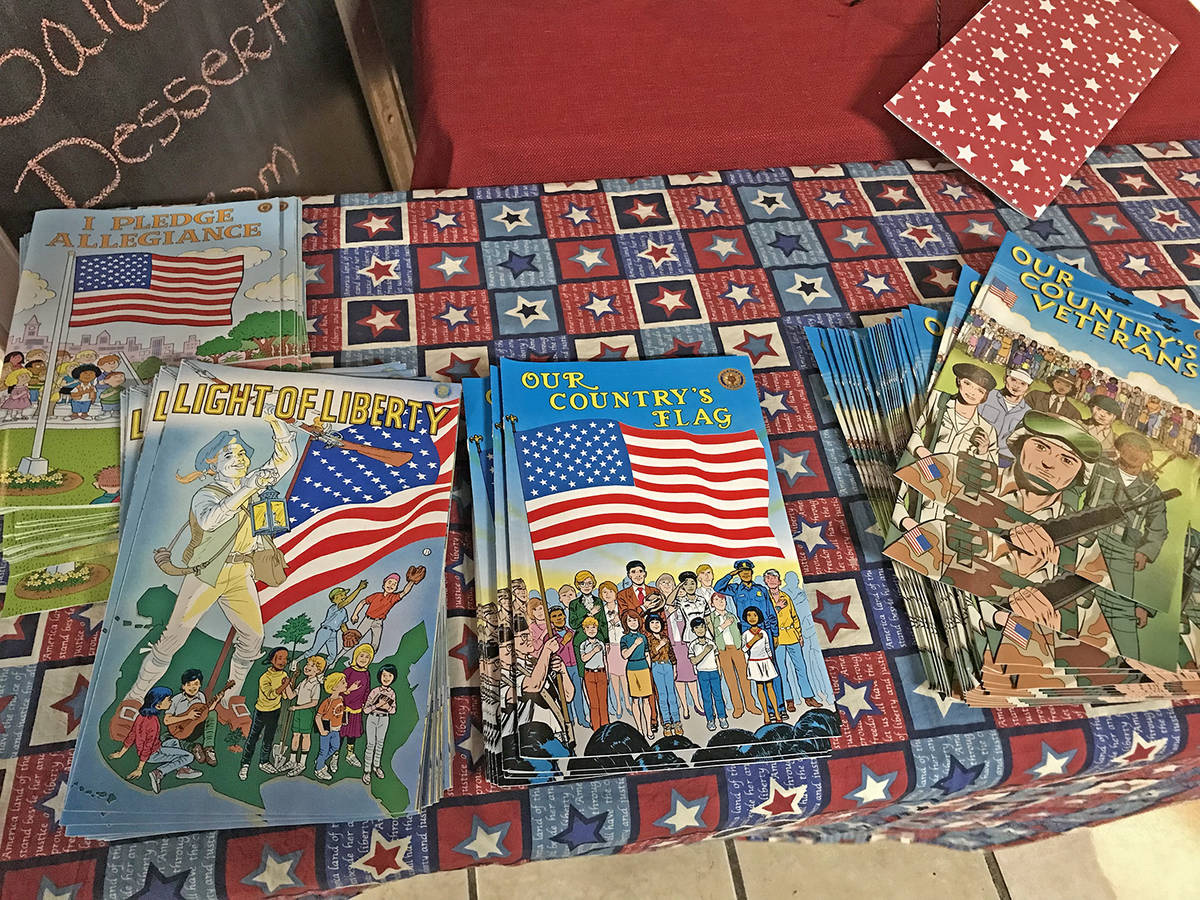 Robin Hebrock/Pahrump Valley Times Donated by Bruce Schoenberger and Dennis Coggins, these patriotic comic books were handed out free to youngsters at the Ride 4 Liberty event. 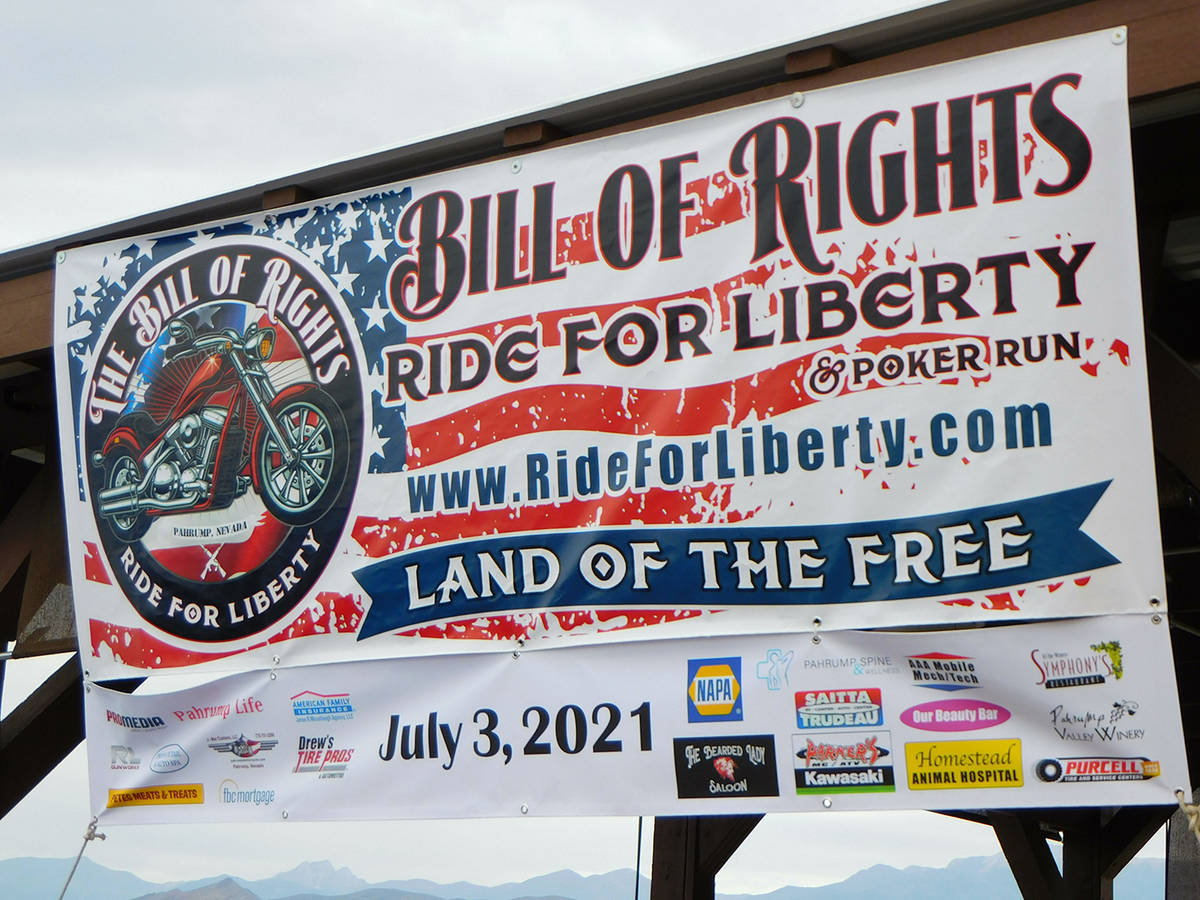 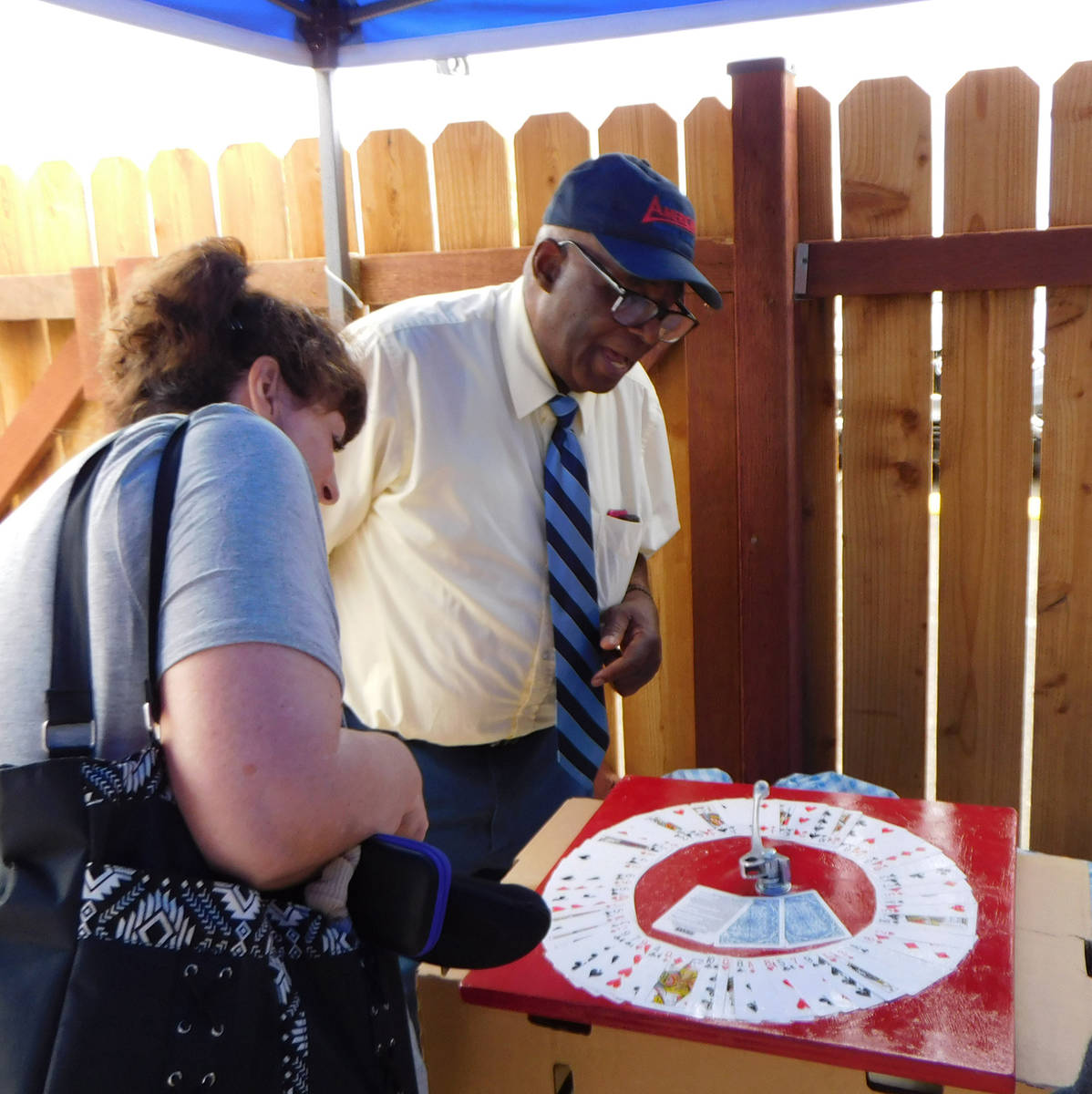 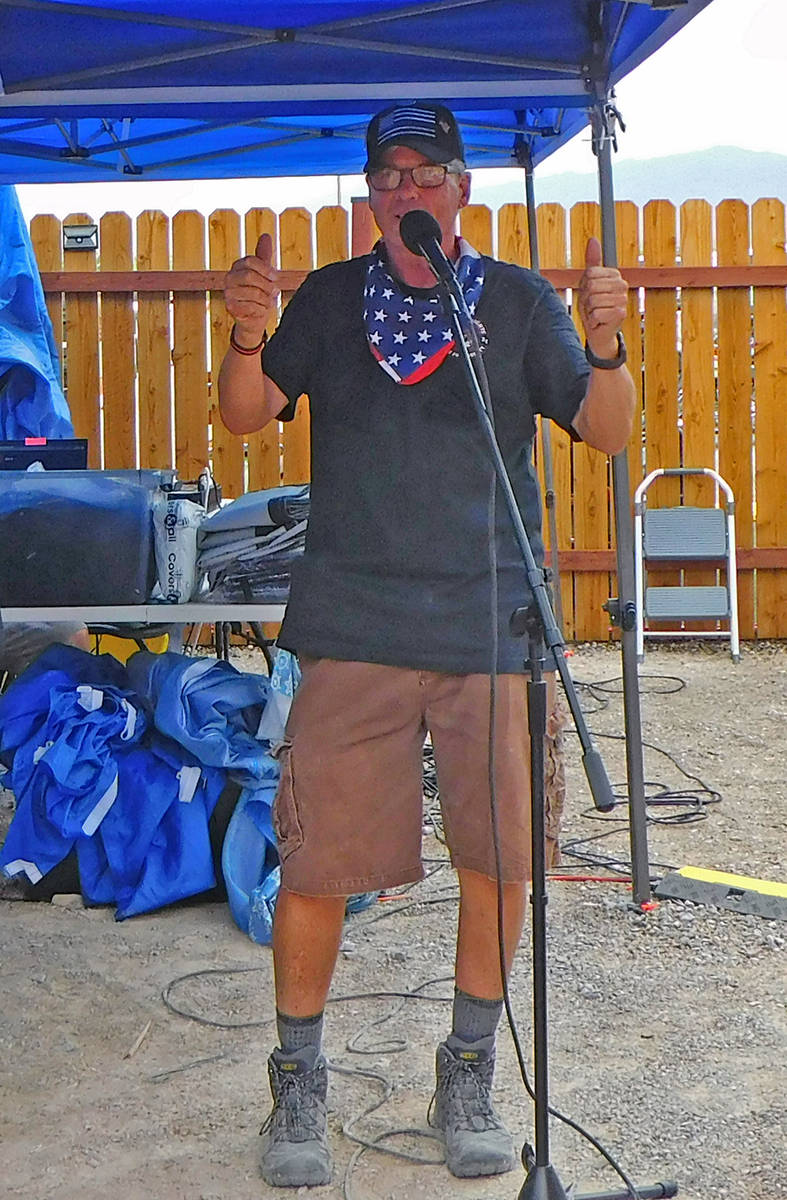 On the cusp of Independence Day, patriotism in Pahrump was running high and hundreds of area residents expressed their delight and pride in the country they call home by taking to the streets during the Ride 4 Liberty Poker Run, an event put on by the Nye County Republican Central Committee in celebration of this most American of holidays.

The Ride 4 Liberty took place on Saturday, July 3 and event organizer Bruce Schoenberger said it was a terrific triumph, drawing together people from all across the community who share a common belief, the need to protect and preserve the American way of life in all its freedom and glory.

“This was no less than a smashing success in almost every way!” Schoenberger, events chair for the Nye County Republican Central Committee, enthused after all was said and done. “The weather could not have been better, with overcast skies and very, very light sprinkles that made it feel like I was in Hawaii. It was much cooler than any of us expected. All the sprinkles and the little bit of heavier rain later in the day did have us rushing to cover our PA system and other equipment but I would say in spite of the rain, which was actually a blessing, it was a perfect day.”

Schoenberger estimated that around 200 people took part in the poker run itself while a further 200 or so made their way to Veterans of Foreign Wars Post #10054 for the after-party, bringing total attendance to approximately 400 throughout the day, a figure that had him glowing with gratification.

Those who did not take part in the actual “run” portion of the event by driving around the various pre-selected locations to draw a card were not left out of the fun. Schoenberger said all who showed up to the after-party who did not participate in the run were able to instead spin a wheel lined with a full deck of cards in order to pull their hands for the poker competition.

The top winner of the poker run, the team or individual which pulled the highest hand, won a cash prize of $200 while the second, third and fourth best hands won $100, $75 and $50, respectively. The day’s biggest winner, however, was Mary Fisher, who bought into the 50/50 raffle and won an incredible pot worth $740.

The poker run and 50/50 winners were far from the only ones to walk away with a little something after the event, with Schoenberger noting that thanks to the many donations received, event organizers were able to raffle off a whole host of items that afternoon. In addition, a silent auction gave attendees yet another chance for winning a prize and Schoenberger remarked, “It would be fair to say that most everybody won something that afternoon!”

It was a special afternoon that touched Schoenberger’s heart as he watched attendees reveling in the all the fun. “Perhaps my most favorite part of the day was simply seeing so many happy, smiling patriots, feeling empowered and optimistic over this Fourth of July weekend, in support of not only our independence but the liberties that we have here in ‘Liberty Valley’, Pahrump, Nevada. The camaraderie and like-mindedness was truly heartwarming and breathtaking,” Schoenberger said.

“Another special moment was handing out the patriotic comic books free to our youngsters,” Schoenberger continued, referring to a variety of comic books that he and Dennis Coggins had donated for the event. “Our youth are the future generation, and they will be able to read about the Bill of Rights, how to treat the flag properly and how to display and honor the flag, learn about the Pledge of Allegiance and what it stands for, and learn about our military and veterans in the comic books illustrating our great men and women of the military. This will allow children to read and see pictures that will help them understand what makes our country so wonderful.”

As for just how much was raised at the Ride 4 Liberty Poker Run, Schoenberger said the totals were not quite calculated yet but he could confidently report that the fundraiser was successful beyond all expectations.

“The Nye County Republican Central Committee is committed to supporting conservative values, future candidates and causes for Nye County and Pahrump, which we are striving to make known as ‘Liberty Valley’,” Schoenberger said when asked about the uses to which the fundraiser on Saturday would be put. “Most importantly, a portion of the funds will be going toward that ‘Liberty Valley’ effort. In keeping with our conservative community here in Pahrump, we will be raising other funds to construct highway signage at each of the entrances to the town, from Highway 372 and Highway 160. This project will include ‘Liberty Valley’ signs. These improvements will not cost the taxpayers of our county anything. Rather, the funds for this expenditure will come from donations, the Ride 4 Liberty event and other future events.”

Schoenberger also expressed his gratitude to the venues that allowed the Ride 4 Liberty Poker Run to use their locations, including the Phoenix Bar and Grill, The HUBB, Coyote Corner and the Tribe Motorcycle Club. “And a very special thanks to VFW Post #10054 Commander Marty Aguiar for the use of the facility and to all the staff at the post and the VFW auxiliary for all their services to the community, including the kitchen and food service on Saturday,” he added.

The Nye County Republican Central Committee is now busy planning its next two fundraiser events. The first is tentatively scheduled for mid-August at the Pahrump Valley Winery. This will be a sit-down dinner at Symphony’s Restaurant with a special guest speaker and entertainment. Following this, another Ride 4 Liberty Poker Run is in the works for October. Details on these events will be released as the events near.

Anyone who wishes to get involved in either of the upcoming events is encouraged to contact Schoenberger at showinusa@yahoo.com