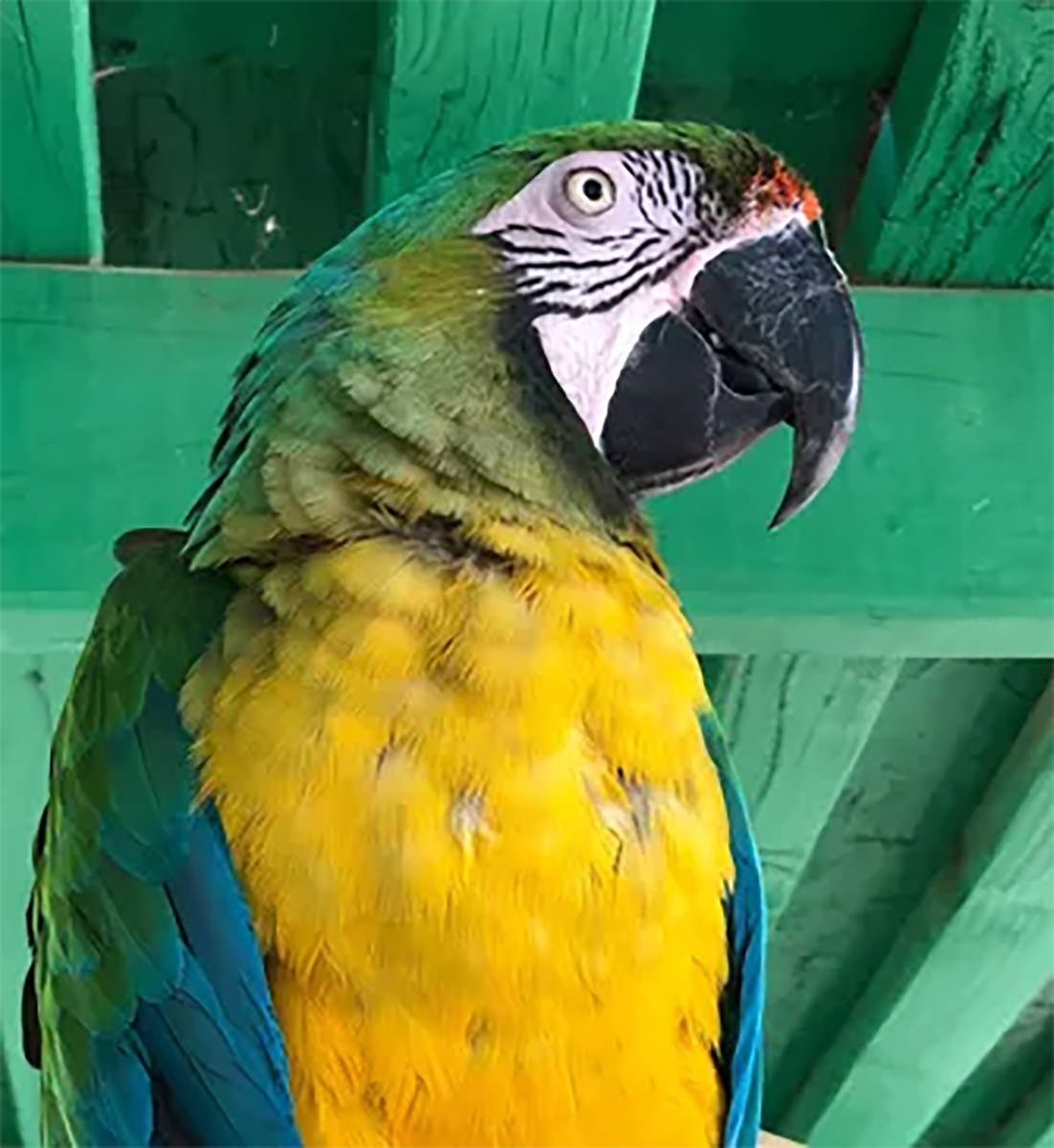 Heidi Fleiss.com Pahrump resident and bird sanctuary owner Heidi Fleiss believes her longtime companion "Miller" was killed by a coyote after the macaw recently went missing. Upon his disappearance, Fleiss offered and $10,000 reward for his safe return. 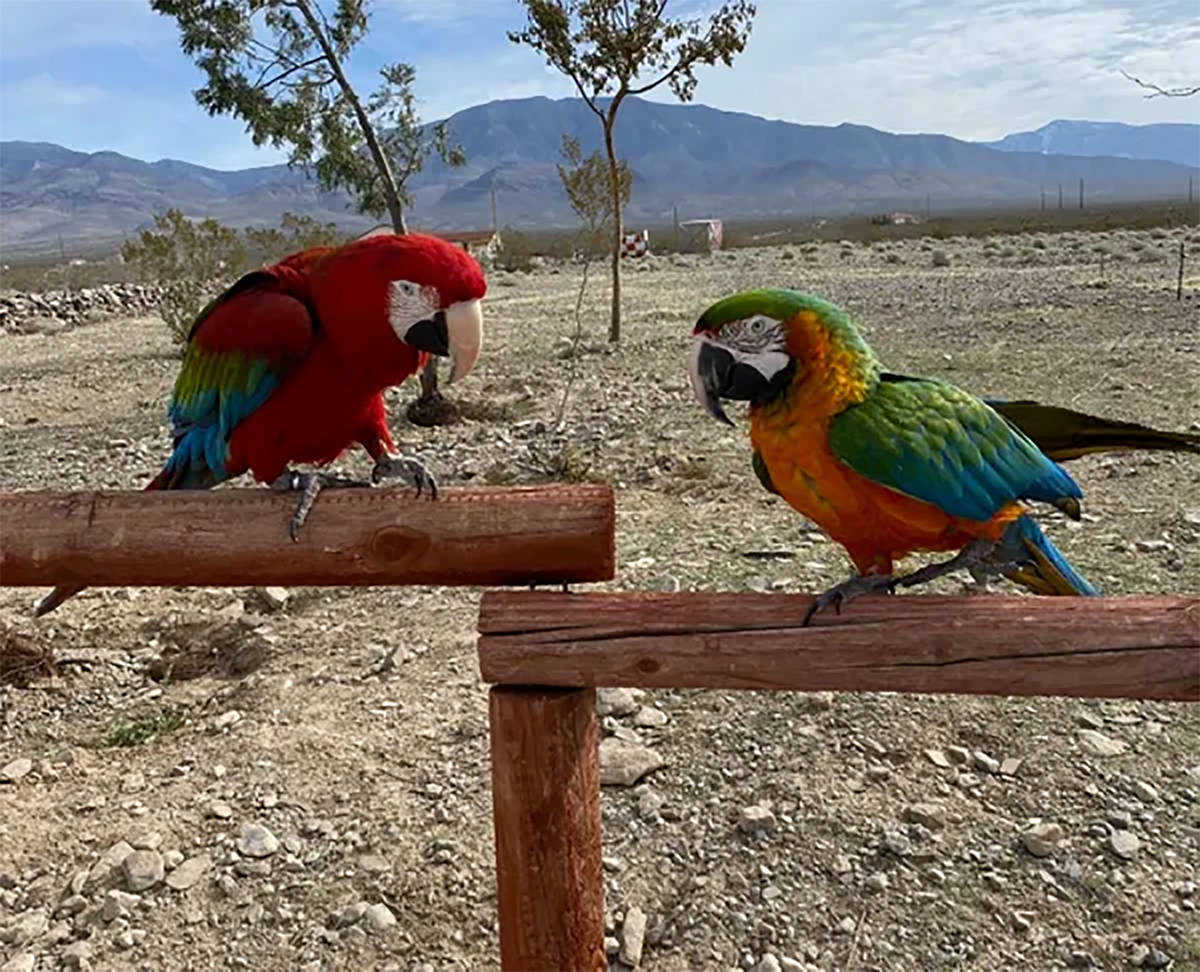 Heidi Fleiss.com Fleiss' 40-acre bird sanctuary is home to a variety of exotic birds on the far north end of town. She also noted that she is truly dedicated to making the site "a place of healing" for the creatures.

UPDATE: An arrest has been made in the disappearance of “Miller,” Heidi Fleiss’ missing bird, the Nye County Sheriff’s Office confirms. The bird was thought to possibly be the victim of predation earlier this week. According to social media reports, Miller has been returned home and is safe. WATCH for updates on pvtimes.com or on the Times’ Facebook page.

A $10,000 reward offered by Pahrump resident Heidi Fleiss will go unclaimed, it appears.

Fleiss, a self-described birdkeeper, extended the money to anyone who could provide the whereabouts and safe return of one of her many exotic macaw parrots located on her 40-acre bird sanctuary on the far north end of town.

She sorrowfully lamented that her macaw named “Miller”, which she had owned for many years, was likely the victim of a predator near her sanctuary.

Macaws are categorized as a group of long-tailed colorful parrots that are popular in aviculture circles or as companion parrots, such as the case with Fleiss.

Some of the species can live as long as 50 years.

“It’s really difficult for anybody to feel and understand that connection,” Fleiss told the Pahrump Valley Times. “With the $10,000 reward, I thought someone would come forward with information. I know that he was killed by a coyote. Macaws don’t soar like birds of prey and he was just learning how to fly. Most likely my alpha bird Ernie went after him and he got caught up in that windstorm and probably landed and attracted a coyote. That bird loved it here and he would never leave here, ever.”

“People who come over knew Miller because he bites, he yells and he’s a horrible pet, but that was his own personality,” she said. “With me, he was fine but with anybody else, he was awful. To be honest, I would pay a lot more to get him back. He was really a rambunctious bird and I loved him so much. He really knew his way around. Out on my property and if I’m out in the desert, that bird would walk out and find me.”

Fleiss also spoke about the curiosity and popularity of the macaws in terms of how willing individuals want to get a “human’s-eye” view of the creatures.

“People pay thousands of dollars to take a guided trip around the equator to see them flying in their natural habitat,” she noted. “The highlight of Disney World’s Animal Kingdom show is when the macaws come free-flying over them, because when you see them flying over you, it makes you feel good. Here, people can do that without paying $20,000.”

Further, Fleiss also said she wants to thank the community for their respective support for her sanctuary over the years.

“I’m so grateful that the community has embraced the ones that fly around and looks out for them,” she said. “There’s two of them who fly around all over and the community and I don’t want to encourage people to take them. To have the community to be so supportive, and love them is really cool.”

For additional information on Fleiss’ sanctuary, visit her social media site on Facebook entitled Heidi Fleiss Bird Keeper, or logon to her website at https://heidifleiss.com.