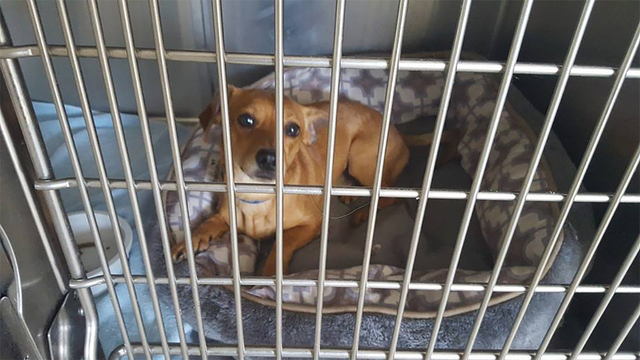 Nye County Animal Control officers rescued more than a dozen dogs after Monday’s Fourth of July fireworks celebration throughout town. Desert Haven Animal Society has a Facebook page with images listing the newly-arrived animals. At least two owners have since reclaimed their pets the shelter said this week. Special to the Pahrump Valley Times

Desert Haven Animal Society Manager Marla Greanya got what she expected on Tuesday – an influx of frightened pets who tried to escape the rockets red glare and bombs bursting in air on the evening of the Fourth of July.

Right now we have probably taken in more than a dozen animals, Greanya said. One of our volunteers counted about 15 phone calls regarding lost animals that we did not have so they are still running at large two days after the fireworks. After Monday, animal control did bring in a lot of stray pets that pretty much filled up all of our kennels.

Though two pets have since been reclaimed by their owners, Greanya is hoping all of her new guests, will eventually be reclaimed, as the shelter is running at capacity.

She noted even felines are part of the inflow this week, many of which were already on site.

Right now we have probably close to 200 animals on site here, which includes a lot of kittens, she said. The litters are together in large quantities so its not 200 individual cages. As far as the dogs are concerned, every single dog run is full. Its over capacity right now for the time being.

There is a process for owners to reclaim their pets, Greanya noted.

For an animal to be legally released, they must be current on their rabies vaccine.

If they dont have proof that their pet is current on the vaccine, our veterinarian will provide that before the dog or cat can be released and theres a fee for that, she said. Its required in the county that the animal be licensed. If they are not licensed they will need to be. Theres also an impound fee for each time an animal comes in. Its a pretty simple process where we just collect a little information and release the pet.

Greanya said she and her staff expected to take in an assortment of pets arriving at the shelter after the holiday.

Sadly, this happens every year after the Fourth of July and we always prepare for it, she said. We know that we should set up a lot of kennels for the overflow. We also had overflow-boarding at one of the vet clinics in town where they took in about a dozen dogs. We received a lot of cats as well, which was surprising. There were also a couple of animals who were hit by cars and died.

Greanya also said the animals photos are posted on the shelters social media page for owners to identify lost pets.

One owner came and identified their dog but has not yet replied to it, she said. Another saw that their dog was posted on Facebook. They havent picked her up yet but we are expecting her.

Be it the Fourth of July or another holiday where fireworks are set off, Greanya offered simple advice for pet owners concerned their pets will run off.

I would advise pet owners not to leave their pets outside, unattended, regardless of fireworks or not because theres always a way to get out, she said. Its also best to lock them securely indoors if that is possible and provide them with any comfort they need.

The shelter is closed on Wednesdays.