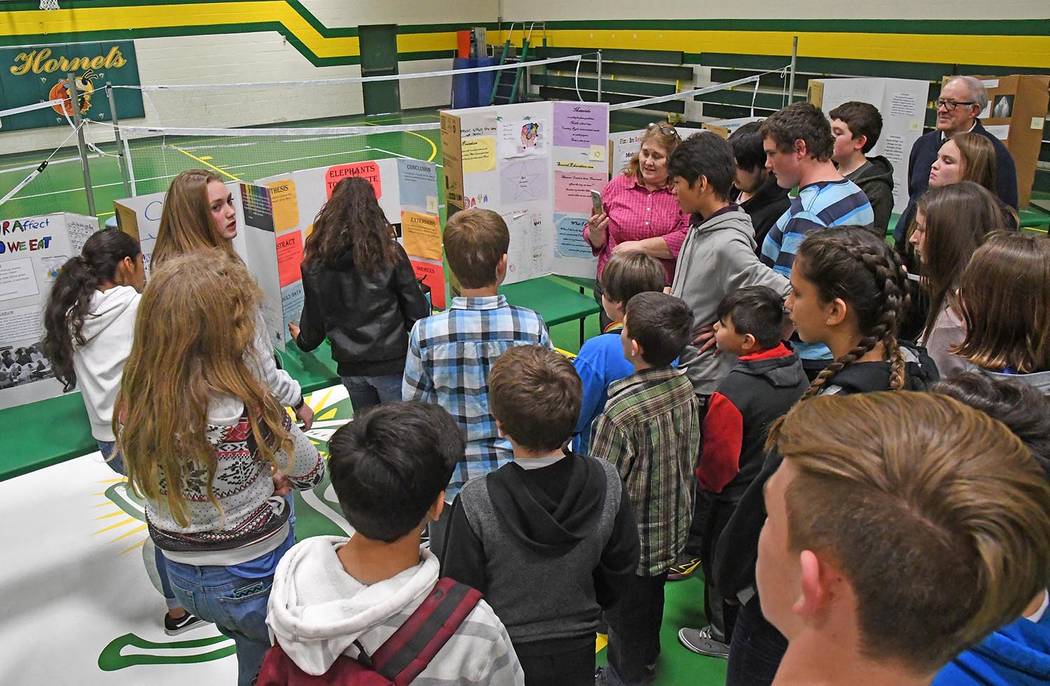 Richard Stephens/Special to the Pahrump Valley Times The fair, held in the school gym, featured some two dozen student projects on an amazing, and often amusing, range of fields of inquiry.

Beatty Middle School celebrated Pi Day, which is celebrated worldwide on March 14, by holding a science fair and serving pie to those who attended.

The fair, held in the school gym, featured some two dozen student projects on an amazing, and often amusing, range of fields of inquiry.

A couple of projects sought to determine whether certain things made students smarter or perform better on academic tasks. One student concluded that chewing gum made kids smarter. Another found that listening to music did not improve academic performance.

The conclusion one student reached — that balloons can be popped by sharp objects — was made a bit more scientific by the observation that balloons filled with air were easily popped by heat from a candle, while water balloons were not, since the water absorbed some of the heat.

Another student experimented with using vinegar to bend a bone, which worked because the acid in the vinegar removed calcium from the bone.

Knowing that objects floated more easily in saltwater. one student wanted to find out how much salt needed to be added to a plastic drinking cup to enable an egg to float. The conclusion was that it took a half cup of salt.

One young experimenter tried used different food colors to find out if color had an effect on appetite.

It seems that red and yellow created the most feelings of hunger. (Could that be why so many fast-food restaurants have red and/or yellow in their logos?)

Perhaps the most bizarre experiment found that it was possible to make a pickle light up by passing a strong electrical current through it.

All this and pie too!