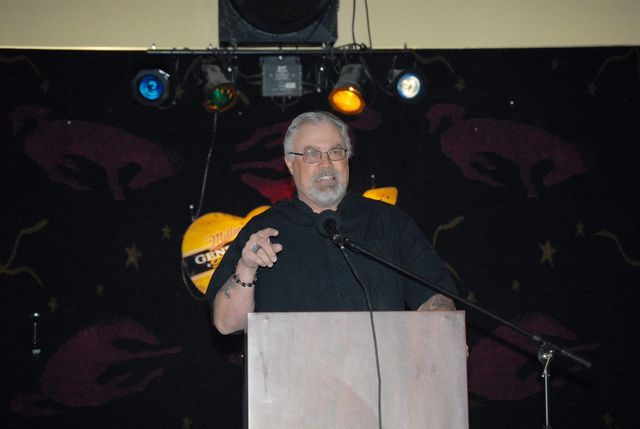 Pilkington has criticized the current public administrator’s office of fleecing the estates of deceased people. Public administrators in Nye County are paid by a percentage of property sales recovered from people who die unattended deaths and not a regular salary. It has been a controversial post in Nye County dating back to Robert “Red” Dyer, who was recalled from office in January 2000 after numerous criminal charges were brought against him.

Pilkington replied on his Facebook page and during an appearance at a candidates meet and greet at the Maverick Saloon and Dance Hall last Wednesday night.

An unsigned letter to the Pahrump Valley Times said Pilkington took the last name of his wife, Denise Pilkington, to escape paying child support for three children from a former marriage. It adds he belongs to the motorcycle club, the “Po Bobs” and is a key player organizing Drink Nights at local bars, where the Pilkingtons later drive under the influence of alcohol.

“First, if you are going to write something like this, at least be man enough to sign it. I disdain people who throw crap out here like this anonymously and then I have to deal with it,” Pilkington wrote on Facebook.

“The reason I took Denise’s last name was because she said she would not be the next Mrs. Tustin and that if I wanted to marry her, I had to take her last name,” Pilkington said. “As for child support, over a 17-year period I paid my ex-wife over $225,000 in child support. She got every dime that I was ordered to pay her.”

The weekly bike nights are an event by the local Skoners motorcycle club, Pilkington wrote. Since June, Pilkington said he attended three of them, his wife attended one. “Other than those attendances I have no other interest in the event,” he said, adding the hamburgers were good though.

“As for drinking and riding our bikes under the influence with Denise, this past weekend was the first time we had actually ridden our bikes around town together for any length of time. On Saturday we left the house at 4:00 p.m. and got back home at 11:00 p.m. During that time we visited four bars and had one drink at each. Also during that time I ‘politicked.’ On Sunday we left the house at 10:30 a.m. and got home around 3:00 p.m. Again we went to four bars, had one drink in each and I politicked,” Pilkington said.

He presented a card to the Pahrump Valley Times listing the P.O.B.O.B. Nevada motorcycle club and the name “Stray Dog.” The initials stand for Pissed Off Bastards of Berdoo, which he said was a colloquial short name for San Bernardino. Pilkington said in an interview the club doesn’t use illegal drugs or engage in criminal activity.

A website for the motorcycle club states it is one of the oldest in the country, founded in a small town south of San Bernardino, Calif. in 1945 by a group of veterans. Pilkington said they’re not part of the 1 percent outlaw motorcycle clubs, a phrase made famous from the American Motorcyle Association in 1947 which said 99 percent of motorcyclists are good people enjoying a clean sport, the other 1 percent are anti-social barbarians.

Pilkington offered another response to something not mentioned in the letter. The Arizona Board of Legal Document Preparers in 2004 denied him a license as a paralegal due to fraud and misrepresentation. Pilkington said he was included on a former business partner’s website as an associated business without his knowledge or that of his former partner.

The denial was upheld by the Arizona Supreme Court, he said. Pilkington sold the business and originally planned to retire in Reno, but he said Denise’s dad got sick and they began coming to Pahrump.