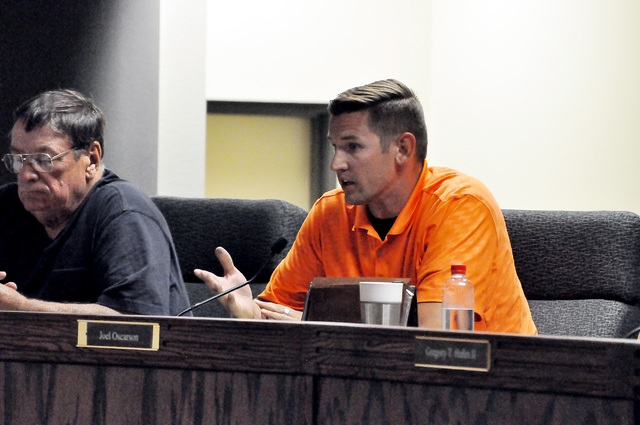 The Pahrump Regional Planning Commission gave the International Church of the Foursquare Gospel a waiver that allows a caretaker’s residence on church’s property.

The subject property was rezoned from open use to general commercial use in 2005, according to the documents. At the time, the property owner had proposed construction of an 11,000- square foot church, a 35,000-square-foot school, and church and school office buildings.

The property owner however didn’t construct the buildings, but placed two RVs on the site. A manufactured home is also being constructed on the property. Under Nye County code, RVs are allowed for temporary seasonal use only on residential lots. The code has no provisions for RVs on a commercial lot.

The building under construction has not been submitted to the Nye County Planning Department for approval and does not have a building permit from the Nye County Building and Safety Department, according to the documents.

“We are entertaining ideas for how to use that property as a church counsel and as soon as we make a decision, everything out there, is temporary. There’s no structure out there that we can’t move off of there. When we turn it into a business, everything will be moved,” a church representative said at the RPC meeting.

Church representatives also said they are in the planning stages of proposing to the church counsel a project that could be voted on within the next three months and could be running within next six months.

As soon as the manufactured home on the property is completed, church representatives said RVs will be gone.

“We just need them out there,” a church representative said. “We’ve lost way too much money on this project to start to date.”

Waivers require a vote from a majority of the RPC. Commission members Joel Oscarson and Gregory Hafen II were the only two who voted against it.

“I think that (in) a year, you guys are not even going to be close to having anything ready to go to have a business there,” Oscarson said.

The owners of an adjacent property, Mike and Stacie Nicosia, said they were concerned about random RVs on the property.

“Codes, zoning, rules and regulations are put into place for a reason. I am concerned with their disregard for them. The rest of the community has to follow protocol. Why should this owner/applicant be allowed to proceed without regard to it? It is our concern that this is the beginning of something else they are trying to push through, that will have a greater effect on zoning issues,” they said in a letter to the RPC.

Under the waiver, Church of the Foursquare Gospel will need to have an active commercial business within two years.