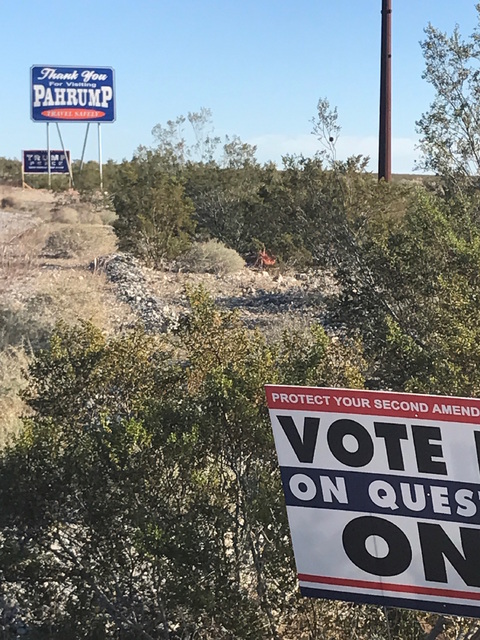 The Nevada Department of Transportation reminds political candidates and supporters that campaign signs must be removed from state road right of ways by Dec. 8. Mick Akers/Pahrump Valley Times

With the 2016 General Election over, those roads cluttered with campaign signage must be cleared by the first week of next month.

The Nevada Department of Transportation reminds political candidates and supporters that campaign signs must be removed from state road right of ways by Dec. 8.

Political signs aren’t allowed on state road rights of way. By state law, any political signs posted on private property within 660 feet of state roads must be removed within 30 days of the General Election.

“It’s about safety,” said Rudy Malfabon, NDOT director. “Signs that distract drivers, block the view of motorists, resemble official traffic signs or interfere with maintenance of our roadsides are not safe. And, after an election, we need to avoid the potential of old political signs interfering in any way with road safety.”

Further information on state road rights of way is available by calling 775-888-7000 or visiting “public involvement/sign rules and regulations” online at www.nevadadot.com.

For future political seasons, NDOT reminds potential candidates and parties that political signs are not allowed on state road rights of way.

If campaign signs are placed on state road rights of ways, NDOT employees will remove signs and store them at the nearest NDOT maintenance station for retrieval by the sign owner within 30 days. Political signs less than four-feet-by-eight-feet can be posted on private property next to state roads no more than 60 days before an election.

Signs over that size require an NDOT permit. Local cities and counties could also have additional guidelines regulating placement of political signs along local roads.