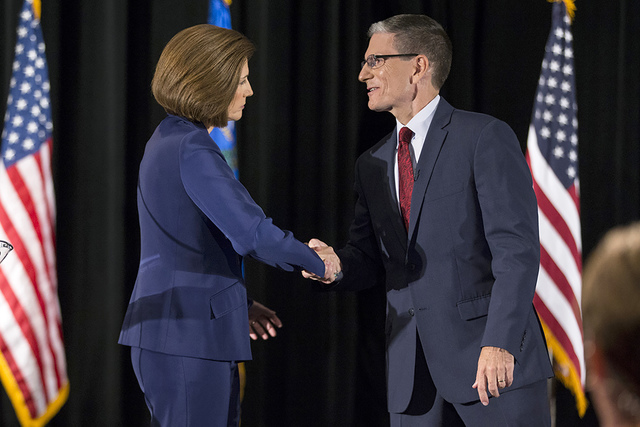 The race for Nevada’s open U.S. Senate seat between Democrat Catherine Cortez Masto and Republican Joe Heck is still deadlocked, according to a poll commissioned by the Las Vegas Review-Journal.

Cortez Masto leads Heck by a 45-44 percent margin, well within the poll’s margin of error. Two percent said they would vote “Other” and 9 percent of respondents said they were unsure.

A prior Review-Journal poll conducted in September showed Heck ahead 47-45 percent, also within that poll’s margin of error.

The new poll shows that Heck might be losing support among both the base GOP voters and independents after he withdrew his support for Republican presidential nominee Donald Trump earlier this month.

Among Republican respondents, 79 percent said they would vote for Heck, compared to 85 percent in the previous poll. Among independents, that number dropped from 48 percent to 36.

The poll, conducted by Bendixen &Amandi International, has a margin of error of plus or minus 3.5 percentage points.

The firm interviewed 800 likely voters following the third and final presidential debate between Hillary Clinton and Donald Trump in Las Vegas on Oct. 19 . The interviews were conducted between Thursday and Sunday in English and Spanish.

Bendixen &Amandi International, based in Miami, has done projects for clients including The Washington Post, Clinton’s 2008 presidential campaign and Obama’s 2008 and 2012 campaigns.