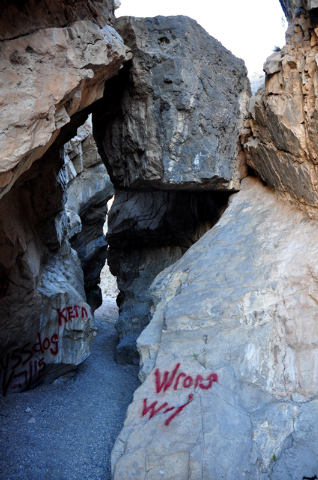 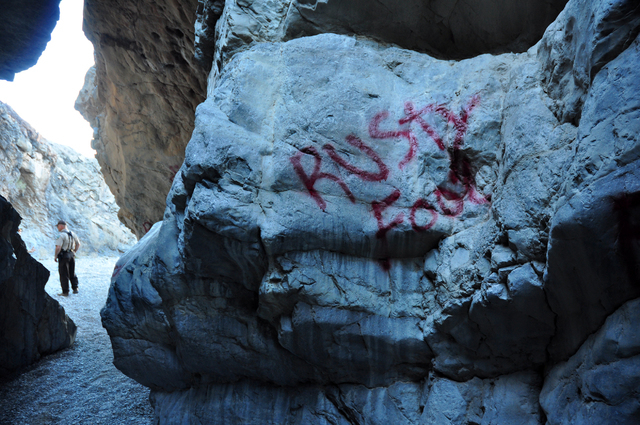 A weekend site for off-road vehicles in the Spring Mountain range called the Narrows in Wheeler Wash was vandalized by an unknown tagger.

Last week some person thought it would be a funny joke to desecrate a popular public lands OHV hangout with obscene pictures and a name, but the funny thing is the Bureau of Land Management is not laughing and neither will the taxpayers when they get the bill for cleanup.

The popular spot is about 2-3 miles up Wheeler Pass road. The area gets its name from steep majestic canyon walls which are barely wide enough to squeeze an ATV through it. The Narrows was made by years of erosion, which has sculpted a path through the massive rock, leaving a piece of natural art for all to look at and enjoy.

The tagger suspect took red spray paint and desecrated the canyon wall with the name Rusty, and then filled the wall with graphic art down the length of the narrow pass. The lettering is about two feet high.

Field Law Enforcement Ranger for the Bureau of Land Management Shane Nalen said, “It’s a shame because families and kids have to drive by and look at this mess.”

Nalen said he found out about this through a tip by a concerned citizen in Pahrump.

“The witness was up here when it happened and he called me right after it happened,” Nalen said. “He heard the suspect but when he got there the suspect was gone, but the paint was still wet.”

The ranger said he hopes to get enough information to catch the suspect who painted the area and is urging the public to help out with his investigation. He said the suspect may go by the name of Russ or Rusty and have ties to Oildale, Calif.(Kern County). Based on witness information, the suspect is believed to be a white male, mid 30’s, with a large build. He was observed operating a blue Yamaha racing quad with a blue and white helmet.

The ranger is worried that this may become a problem like it has at Red Rock Canyon (Las Vegas). Of course, then there are multiple problems of getting this cleaned up.

“Graffiti tends to attract more,” he said. ‘The goal is, in the event we catch the suspect, we will have them pay for it. In the interim, BLM will pay for the cleanup.”

When you’re talking about public lands the cleanup is a bit more complicated than a building in town. According to the Public Affairs Specialist for the BLM Southern Nevada District Office Kirsten Cannon there is more to this than just the sandblasting of the canyon wall.

Tagging and graffiti are something people associate with living in the big city but according to Cannon it’s not just a city problem.

“Graffiti on public lands is a huge problem,” Cannon said. “It hasn’t been a problem here in Pahrump, but at Red Rock Canyon (Las Vegas) it has been a huge problem. At the Lost Creek discovery trail in Red Rock, there were some old Native American rock art by a prehistoric campsite that people painted over. It was rock art from thousands of years ago. It just wasn’t like near it or close to it, it was over the art.”

She said in that case they couldn’t use a sandblaster.

“We had to hire a specialist from Australia,” she said. “The volunteers were taught how to use steel wool with Q-tips to carefully remove the paint. Also in that area there is a waterfall. That area also got covered up in paint.”

Cannon said graffiti has also hit the national parks. She said a lady had gone across country and vandalized national parks and she even hit Death Valley, so it’s a rising problem.

At this point, the BLM has not put a price tag on the damage.

“We are focusing on the investigation at this point but this sort of thing usually is in the thousands,” Cannon said.

According to Nalen, there are a few other areas with a graffiti problem in the Pahrump area but this one was the most extensive.

Cannon hopes that Pahrump does not become like Red Rock.

“People who live in small communities or tight-knit communities like Pahrump usually have less damage because they appreciate their public lands,” Cannon said. “Sometimes in more urban areas there are a lot of people from out of town or the people don’t have a concept of it being their public lands. So they feel it is someone else’s problem to clean it up.”

BLM Law Enforcement is actively investigating the crime and is working in partnership with Nye County Sheriff’s Office and Metro Police Department to solve this case. Any information on this case can be reported to the Lake Mead Dispatch Center at (702) 293-8998.