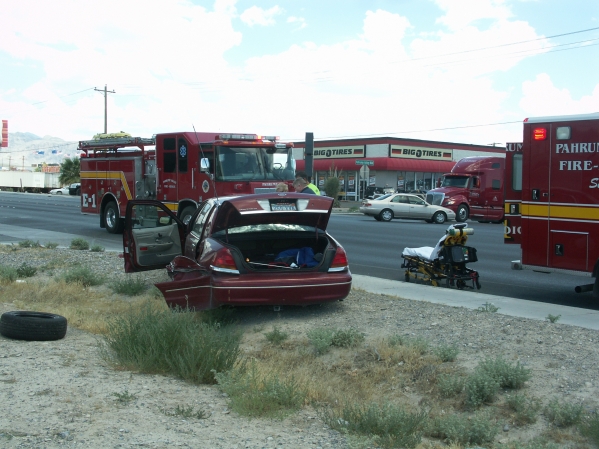 As Pahrump continues to grapple with unpaid medical debt, officials are looking at privatizing ambulance service in town.

The Board of Nye County Commissioners last week directed County Manager Pam Webster to prepare an analysis of a privatized service, despite previous studies that showed such a move wouldn’t be beneficial.

While some commissioners said Pahrump needs to analyze how the funds are being collected and possibly reduce them, Pahrump Finance Director Michael Sullivan said ambulance rates in Pahrump are average.

“I don’t think that’s the answer because when you lower your rates, then your insurance reimbursements go down. … Clearly, this is not a surprise, it has been that way for a long time,” Sullivan said. “The collections are in the 50 percent or lower based on the pros that we have built.”

Sullivan said the bill usually consists of a flat rate based on level of service, mileage and additional special meds. Ambulance rates include $650 for basic life support, $675 for intermediate life support and $700 for advanced life support, as well as $18 per mile.

“Like I often repeat, here when you get your explanation of benefits statement, the insurance companies don’t reimburse them with a full amount,” Sullivan said. “They reimburse us for their rates, so these primarily end up being privately paid people who’ve got no insurance that aren’t covered by Medicare or Medicaid.

“And then, the next level is, even when you have insurance, there’s a deductible or a co-pay depending on your policy. So even some of these people are insured people but are unable to make that payment. We do collect, we do make every effort to collect. There’s not a way in a community whose income levels may not be able to sustain the payments.”

As a public agency, he said the question is how hard you can press.

“We do (collect), our people make calls right away and we have many people that cooperate,” Sullivan said. “However, we can not collect it all. That’s just the state of medicine.”

Commissioners Frank Carbone and Donna Cox said if the county can’t collect all of the debt, it could lower prices or hire a third-party evaluator to aid the process.

“Maybe the industry standards (are) too high, we need to probably look at those things,” Carbone said.

“Maybe we need to reduce the cost of using an ambulance?” Cox said. “I’m not sure what we are charging each individual, but I’m sure that something is terribly wrong here. I think maybe we need to look at privatizing the ambulance service because we can not continue to keep these losses as long as we are not overcharging. If we are overcharging, we really need to reduce that cost.”