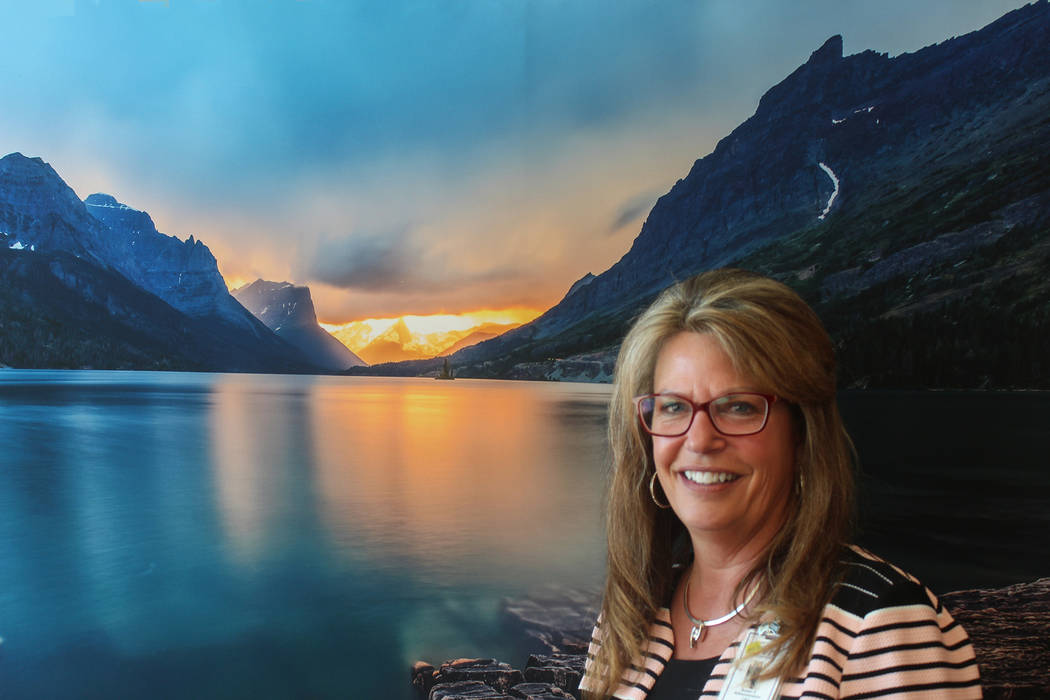 Jeffrey Meehan/Pahrump Valley Times Susan Davila, CEO of Desert View Hospital in Pahrump stands in her office on the hospital campus on March 25, 2019. The hospital is just north of Highway 372 at 360 S. Lola Lane. 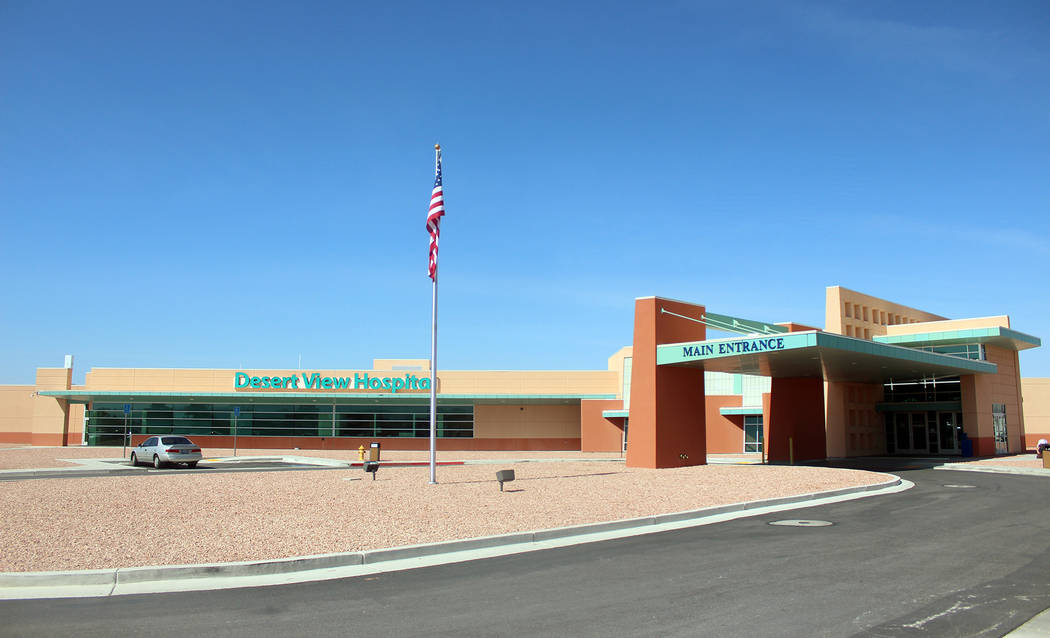 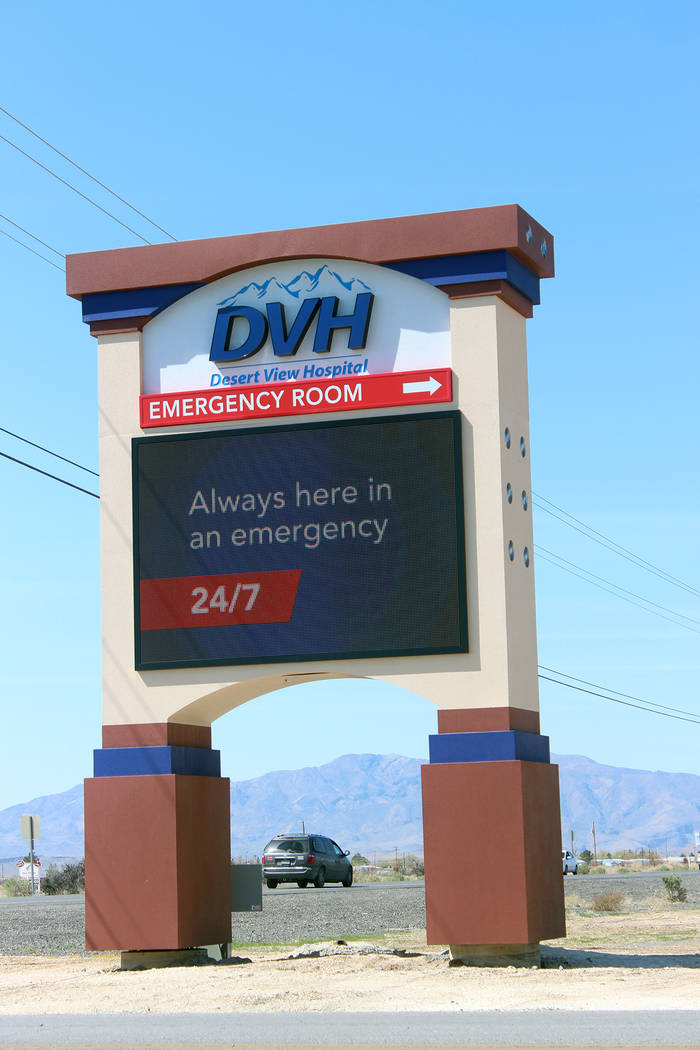 New offerings at Desert View Hospital ushered in additional specialty services to southern Nye County residents and others in 2018 and in early 2019. Patients with non-life threatening illnesses and injuries also noticed another new service at the hospital in early 2019: a fast-track ER.

A new hospitalist group was brought into Desert View in 2019, adding several specialty services for area residents and others who utilize the hospital that contains 25 licensed beds.

“In 2019, we did switch our hospitalist group,” said Susan Davila, CEO of Desert View, in March 2019. “With switching the hospitalist group, that even added more specialty services for our community. It would expand the cardiology and the pulmonologist we brought on.”

Additional services were also added at Desert View with the addition of a new orthopedic surgeon. Other additions also occurred in 2018.

“We brought in our GI (gastroenterologist) guys, so that provided more services here at the hospital and patients can have their procedures right here at Desert View Hospital,” Davila said.

Patients experiencing non-critical emergencies can call ahead at 775-751-7172.

“Community members have the opportunity to call ahead and ask if there’s a specific wait, how long the wait is…,” said Bonnie Stolzman, chief nursing officer from Desert View Hospital.

According to information in literature sent out to area residents on the new service, fast-track is only appropriate for minor emergencies. Examples of these minor emergencies are lacerations, puncture wounds, sprains, earaches and fevers, along with others.

No plans are in the works currently to expand the hospital, though the future could hold a different story.

“I would strongly have to say that we will be looking at a couple of expansion projects for our budget year of 2020,” Davila said in the first part of 2019. “What that includes, I’m not too positive yet, but there are going to be some different things that we’re going to have to remodel, because we are really outgrowing the space that we have right now.”

When the hospital opened in 2006, the then-owner of Desert View, Rural Health Group, had the intention of expanding it, Davila said.

Davila said “… the intent of it was that they figured with a town this size (at that time) that they would double the hospital size fairly fast, so the infrastructure was all built to be able to handle doubling the building, so you can either go up or out, and that was the intent of this when they first built this.”

Census data does show growth in Pahrump in the last several years.

Davila said the former owners of Desert View expected to see the area population grow to about 50,000.

The population in Pahrump is continuing to grow.

Davila said that health care is one of the important things to have in a town.

“That’s one of the reasons people actually look at Pahrump too, because they know they have the health care services here,” she said.

Davila said Desert View is a critical access hospital and is limited to 25 beds.

However, the hospital can have as many observation beds as it wants.

“That’s not a limited service in that line because they’re considered as outpatient,” she said.

Davila said questions have arisen in the past over the number of beds in the hospital exceeding 25.

“That’s why is because the observation, what we consider observation patients, are considered an outpatient,” she said.

Davila said the hospital just took on several new graduates of nursing programs, some of whom came from Great Basin College’s program in Pahrump.

“We’re very well connected to the nursing program at Great Basin,” Davila said. “They all come over here and do their clinicals. Again, it’s a great community effort to train our nurses right here in the community and be able to keep them.”

“We provide opportunities for their nurses as well,” said Stolzman. “Several hospitals, for whatever reason, have elected not to consider new graduate hires, and we feel that that is an opportunity for us to really help new grads to thrive and grow.”

Davila added that “We’ve had excellent success. Everybody gave us a chance at one time in our lives, so we feel that, you know, you’ve worked hard to get that nursing degree, and we’re taking that challenge on, and it’s worked out very well for us.”

The hospital, overall, currently has 250 employees, according to Davila.