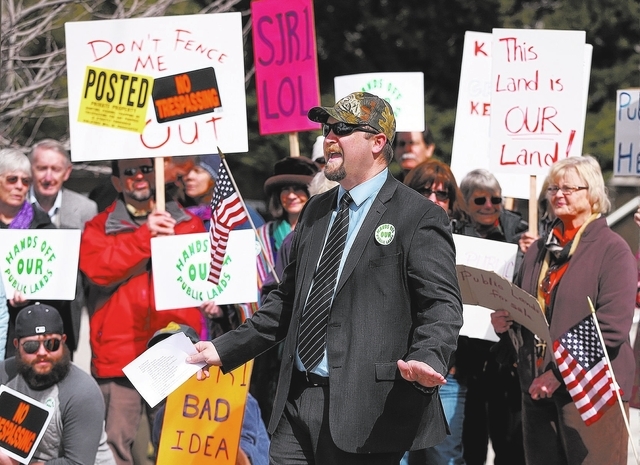 CARSON CITY — A Senate resolution that asks Congress to convey more than 7 million acres of federal land to state control generated a large volume of testimony on both sides of the issue at a Monday hearing, but the issue appeared to be as polarizing as ever.

Ranchers, farmers and some rural Nevadans supported Senate Joint Resolution 1, while conservation and wildlife groups argued against any such land transfer.

SJR1 was requested by several Republican lawmakers as a follow-up to a 2014 study on the viability of the state taking over some of the millions of acres of land in Nevada that is now under federal control.

About 81 percent of Nevada is under the control of various federal agencies, with the U.S. Bureau of Land Management overseeing the largest share.

The Nevada Land Management Task Force in 2014 issued a report arguing that the state would benefit from such a transfer, although opponents of the idea disputed the findings and said Nevada could not afford to manage additional lands transferred from the federal government.

A transfer of 4 million acres of U.S. Bureau Land Management land could bring in anywhere from $31 million to $114 million a year, based on a review of four Western states that have significant amounts of trust lands under their control, the report said. The revenues would come from the sale and lease of the resources on the lands, including through mining and grazing rights. The study was prepared by Intertech Services Corp. and was paid for by the Nevada Association of Counties.

The task force recommended a phased-in transfer of public lands, starting with lands in the original railroad corridor across Northern Nevada and lands already identified for disposal by federal agencies, among other priorities that would total 7.3 million acres or about 10 percent of the public lands total in a first phase.

Wilderness, national conservation areas and several other types of lands would not be included in any such transfer.

Supporters of the concept argued it would help with economic development and give the state some autonomy over lands within the state’s borders.

Assemblyman Ira Hansen, R-Sparks, said he has spent 40 years on public lands as a sportsman and fur trapper and has no interest in closing off access to the acreage. Concerns that the lands would be closed to public access under state control are ill-considered, he said.

“Access is already being choked off by federal land management agencies,” Hansen said.

Janine Hansen, a lobbyist for Nevada Families for Freedom and Ira Hansen’s aunt, supported the measure saying it is time for Nevada to stop being a territory. Rural Nevada needs jobs, she said.

“This is a jobs bill for the state of Nevada,” Hansen said.

But opponents, including conservation groups, are strongly opposed to the resolution.

A statement from the Sierra Club, representing a variety of outdoor recreation groups, said the concern is that once turned over to the state, public lands may not stay public.

About 40 protesters demonstrated in opposition to the resolution outside the Legislative Building prior to the hearing in the Senate Legislative Operations and Elections Committee, which took no immediate action on the measure.

While not entirely a partisan issue, the measure is endorsed largely by Republicans who now control both houses of the Legislature.