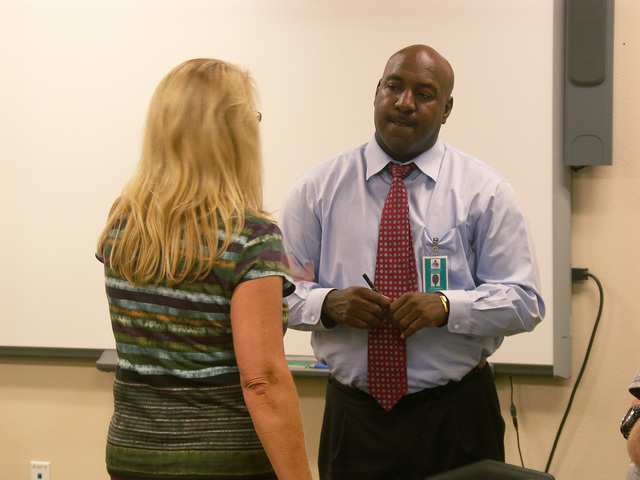 Even though the Nye County District Attorney’s office declined to file domestic battery charges against Floyd Elementary Principal Von Sheppard, he still remains behind bars on a parole and probation hold out of Jefferson County, Colorado.

Sheppard was scheduled to appear in court Wednesday, but the hearing was canceled after the state decided not to charge him at this time.

Nevada Deputy Attorney General Tim Treffinger said there was not enough evidence to prosecute Sheppard at this time, but they have a year to file charges.

“We have reviewed the case and the declaration of arrest,” he said. “Based on the all of the statements we received and at this time, we feel that we do not have enough evidence to support a conviction and that’s why the case was denied at this time.”

Treffinger said the office will re-evaluate the case if any new information becomes available.

Sheppard was arrested at his Pahrump residence Dec. 30, after his fiancé called police to report a domestic battery incident allegedly committed by Sheppard that day and two days prior to his arrest. Additionally, Treffinger said Sheppard will remain behind bars at the Nye County Detention Center due the Colorado hold.

“They can have a hold on him that is separate from ours until they determine whether or not he’s going to be extradited.”

Sheppard remained behind bars on Thursday.

Sheppard joined the school district in August from Colorado after being recruited to Floyd Elementary from a pool of candidates by Superintendent Dale Norton.

Norton was at the court room Wednesday for the hearing that was canceled, but declined further comment beyond Monday’s statement, “this is a personnel matter which by its nature is private and confidential. Mr. Sheppard has been removed from his position with the district pending investigation of criminal charges.”

Sheppard came to Pahrump after six years with the Boulder Valley School District. His last position was assistant superintendent for school leadership. He was a high school principal in St. Paul, Minnesota from 2001 to 2005.

Teachers and administrators are licensed by the Nevada Department of Education. In an email Wednesday, the department declined to comment citing that their lead information officer returns from vacation Monday.