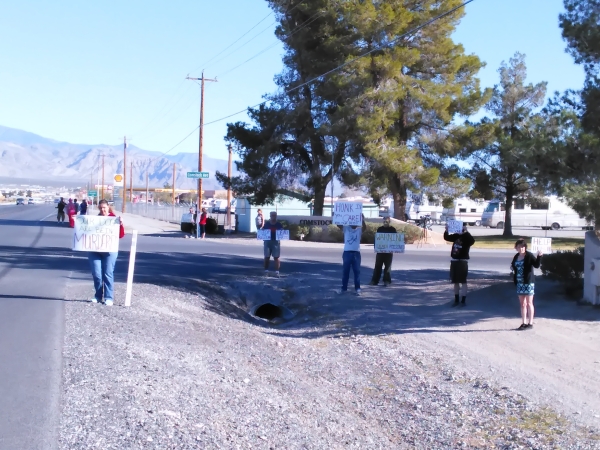 The news of multiple dog poisonings in the Comstock Park community has local residents angry at the response from the neighborhood’s homeowners’ association.

At present, at least five dogs in the area have died from ingesting tainted meats.

On Sunday, the daughter of Judy Miers held a rally in support of animal rights, while criticizing what they say is the association’s lack of concern about the incidents.

Debra Cullen said the association should have notified residents about the poisonings, which Cullen said began happening months ago.

Cullen is also offering a reward for information leading to the arrest and conviction of the perpetrators.

“One lady here today said her dog was poisoned last July and when she went to the homeowners’ association, they did nothing,” she said. “These poisonings have been going on for over a year and not one time has the association warned anybody about it or put anything in the mailboxes about it. This has been going on for more than a year now, and we’ve learned other people have come forward. Their animals have been murdered in the same fashion.”

He too was chagrined at the association’s apparent lack of action.

“I spoke to the president of the homeowners’ association and in my opinion they were more in a defensive-type posture over this regarding liability which she stated,” he said. “She made it clear that they are not liable and even today on the community billboard there is nothing there notifying residents about what’s been going on, which is kind of strange to me. I would think that would be the first thing they would do. She did admit that there is this problem.”

Wannberg also said once an arrest is made, the suspect will face very serious charges.

“These acts are a class D felony for the first offense,” he said. “Poisoning a dog where it suffered is deemed animal torture under Cooney’s law even, if the dog didn’t die it’s still a felony under Cooney’s law. One of the dogs was cremated over the weekend and one dog was buried. If we have another one expire, we are going to try to get a necropsy done to learn 100 percent of what type of poison was used.”

One of the animal rights supporters is a longtime friend of Miers.

The man, wearing a mask while holding a protest sign, wanted to remain anonymous as he commented on Sunday’s rally.

“Everything that’s been going on in this park for the past year, has been ignored by the homeowners’ association,” he said, as passing drivers honked their horns in support of the rally. “They have been hiding the poisoning of animals for a while here. I don’t think they want that kind of information out because it would ruin their reputation. I’m a pet owner myself and I have two dogs.”

Additionally, the Comstock resident said the association is required to notify residents of such instances.

“I think what happened is total crap and the homeowners’ association is supposed to report any felonies that happen inside this park,” he said. “They won’t talk to us and they do not like the fact that I’m even involved in this. When I hear people honking as they drive by, it makes me happy because it shows that they are also in support of this.”

The man also said he and other residents now have an idea of who the suspect is.

“The person that I suspect just got off juvenile detention about two weeks ago,” he said. “About three months of that, there was no problem in the park with any poisonings and before, there were. The people who had seen the person poisoning animals said he was about five-foot-six and looked about 13 to 16 years old. He also had sandy-colored looking hair.”

Cullen, meanwhile said her sympathy extends to other dog owners who have lost their pets to the poisonings.

She noted many of the pet owners are retired with little to no companionship.

“Their animals are like their children and they had no idea that this was going on,” she said. “I’m terrified that this is going to continue. The sad part is, this did not need to happen because if this association did the right thing at the beginning, these people would not be mourning the loss of their animals right now. A lot of these people didn’t have the money to take their dogs to the vet and a lot didn’t realize they were poisoned. If I have to go door to door myself and tell people what’s going on, I will do it even though I’m not a resident of Comstock Park.”